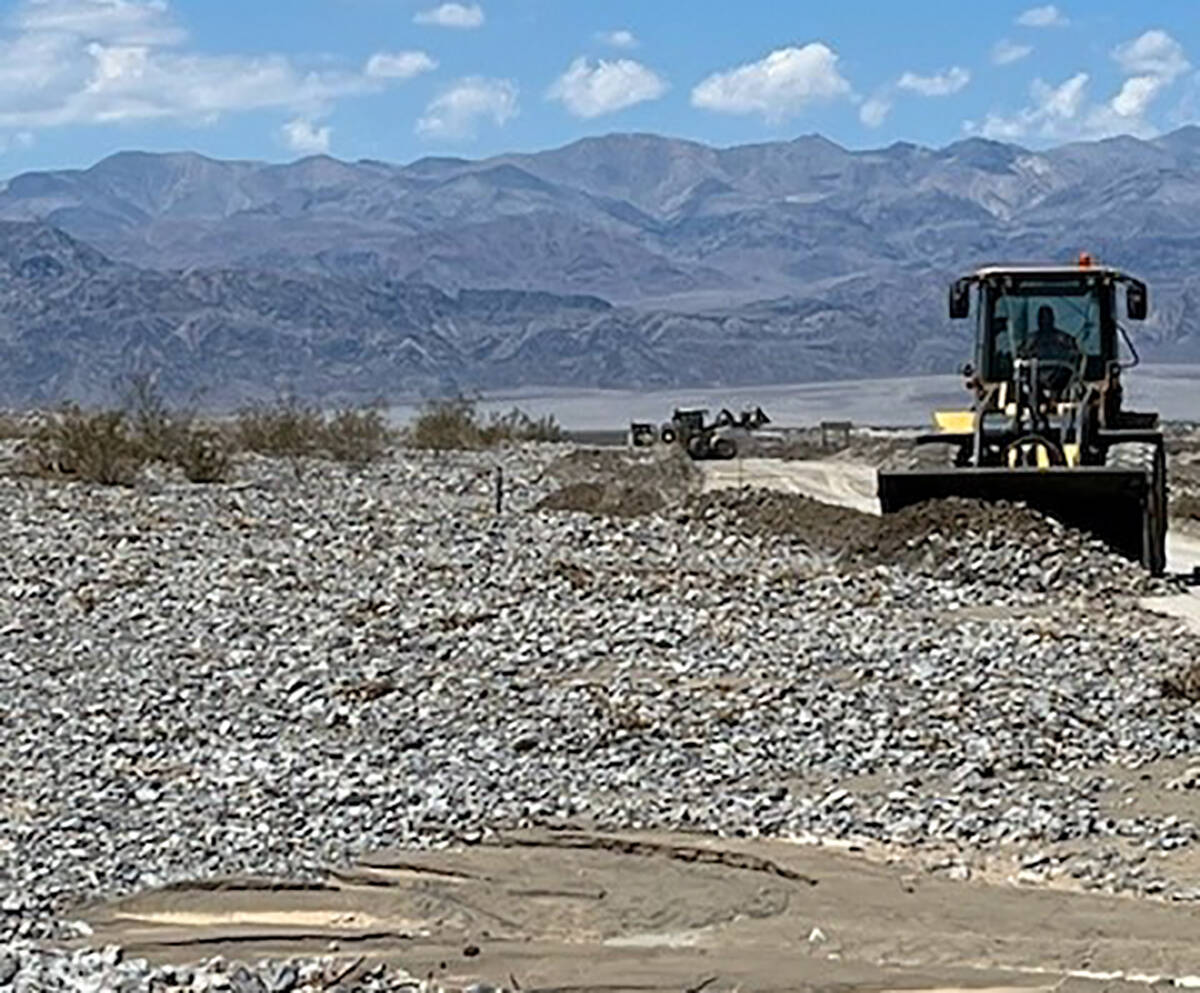 Heavy equipment removes several feet of rocks and flood debris from a road in Death Valley on Saturday, Aug. 6, 2022, after flooding on Friday, Aug. 5, 2022. (CalTrans9 via Twitter) 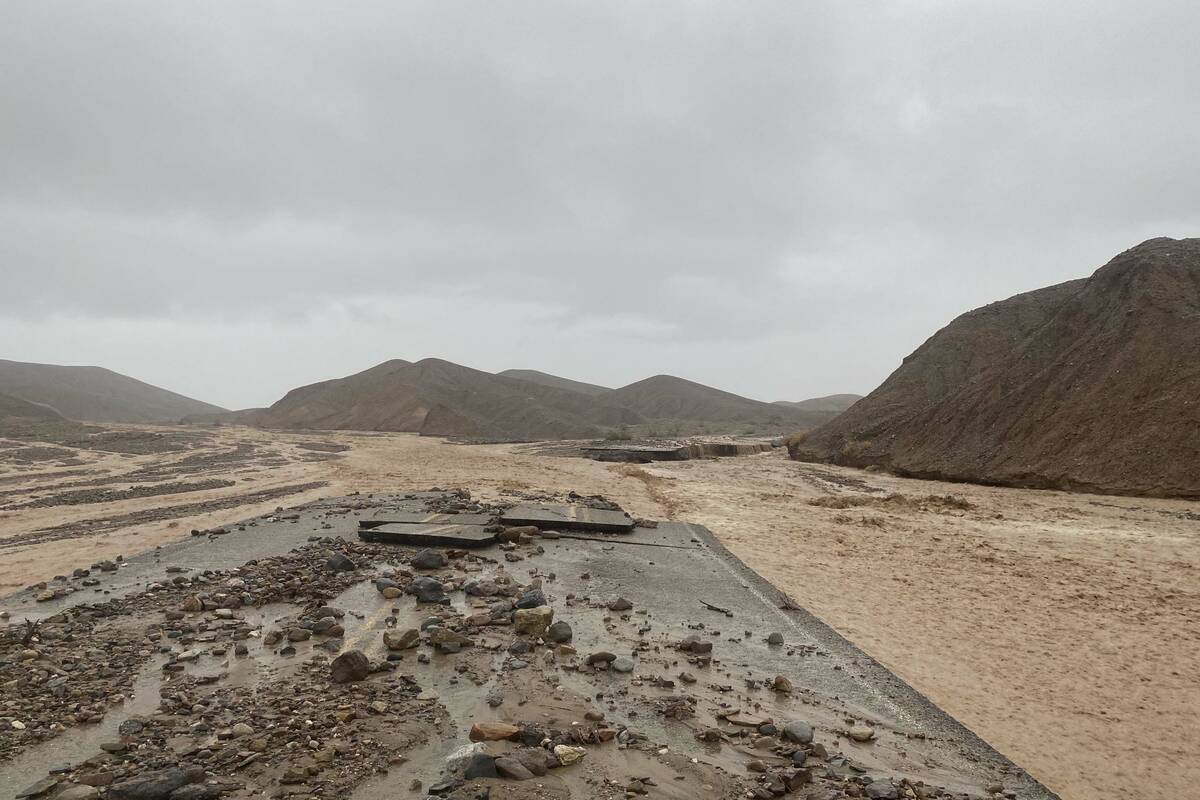 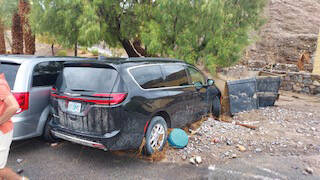 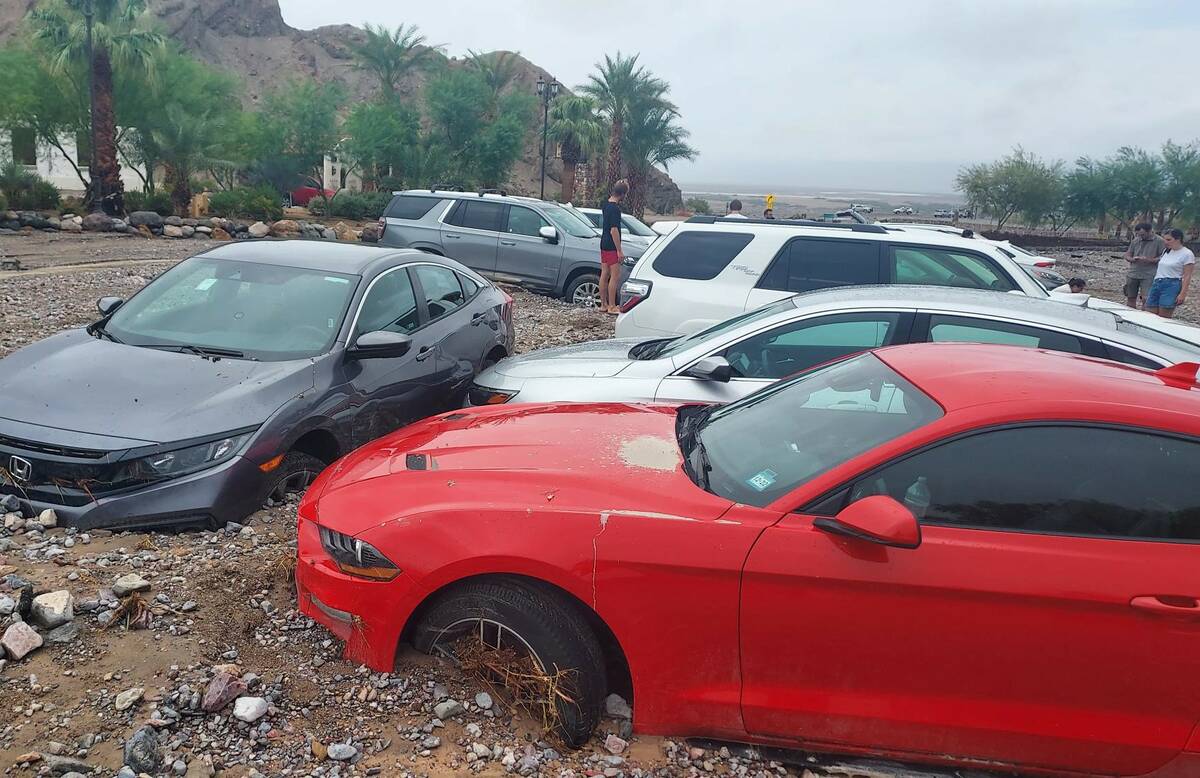 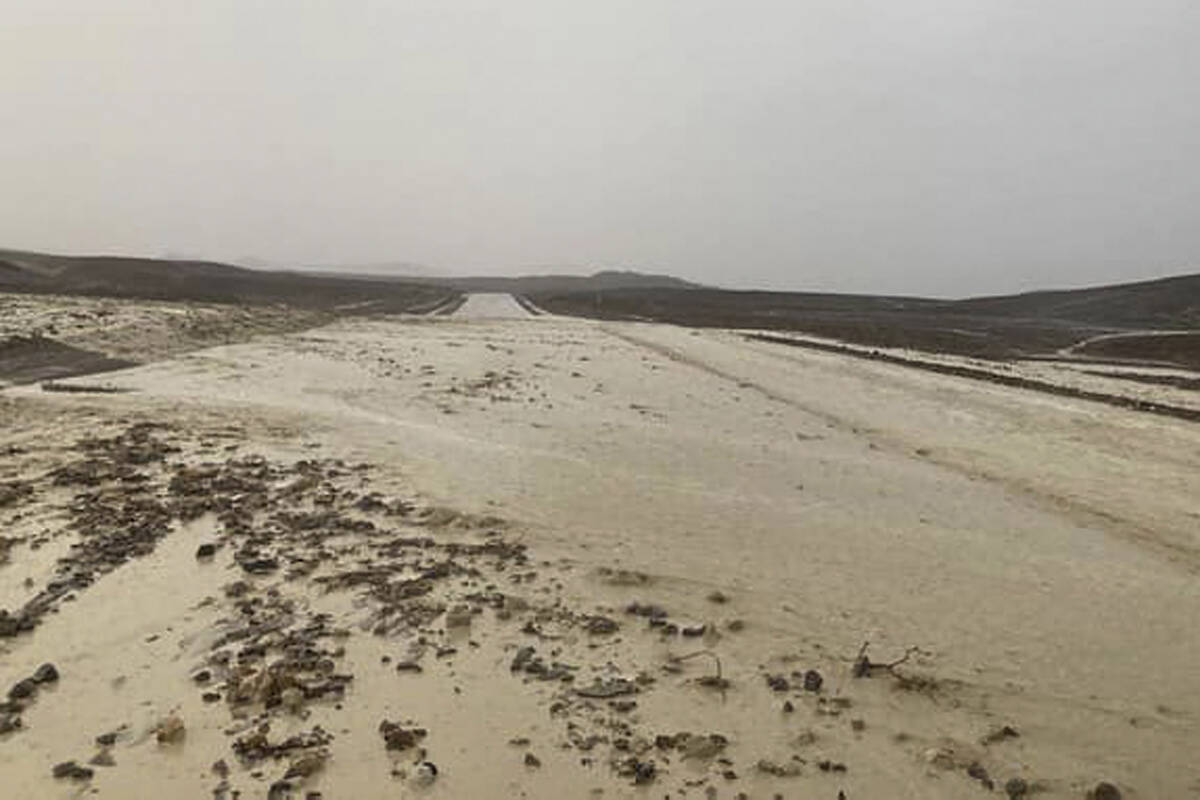 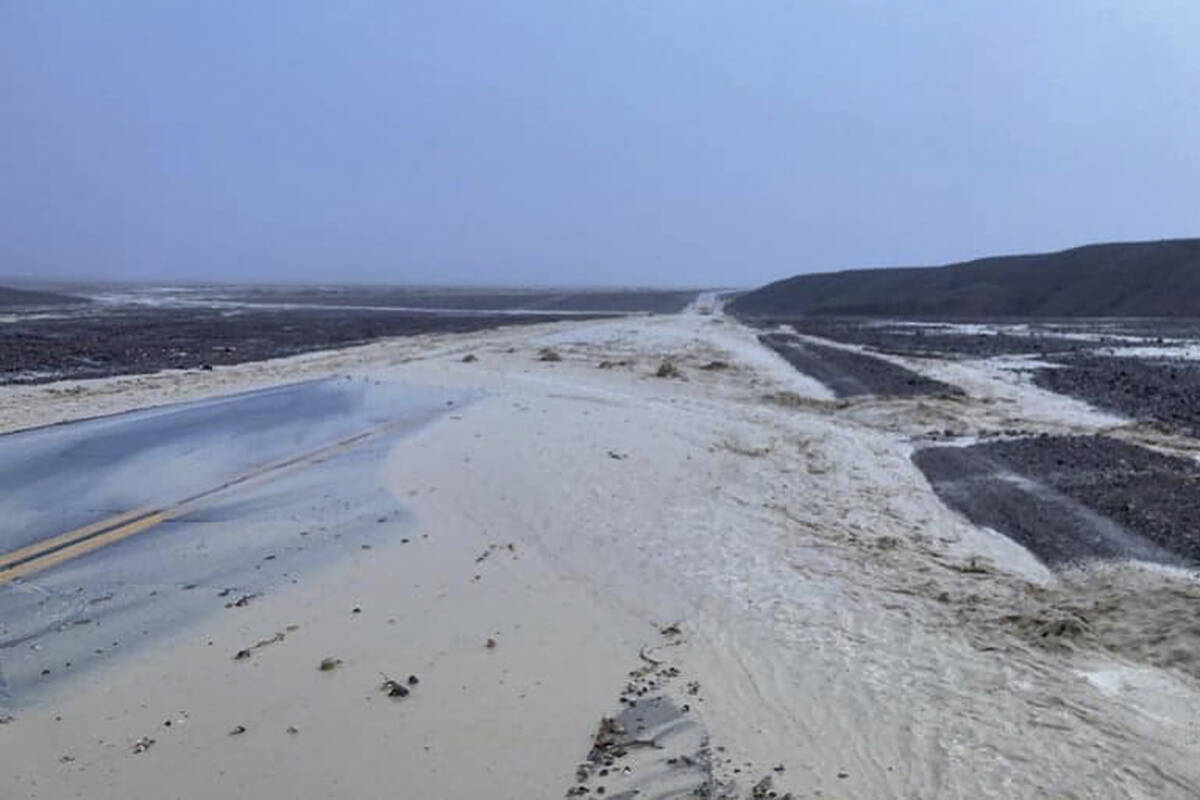 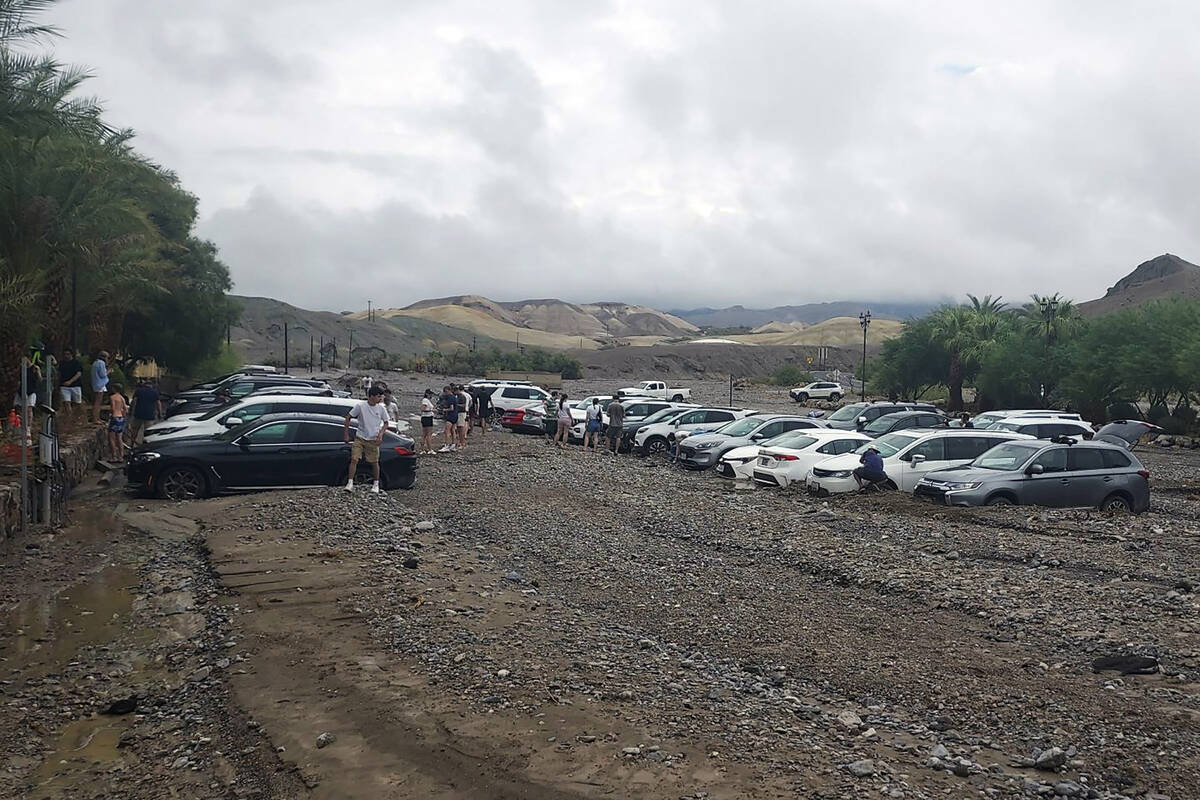 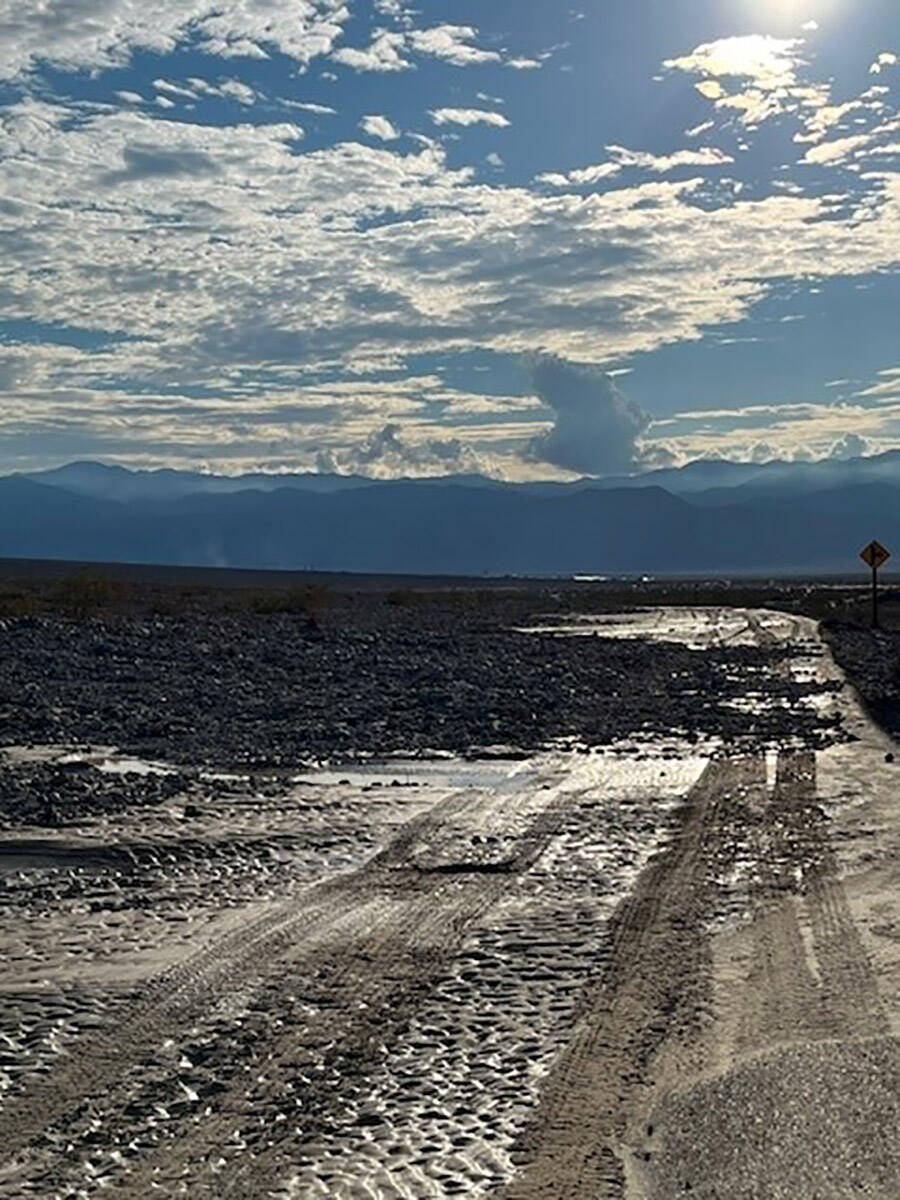 Mud and debris cover a road in Death Valley National Park on Saturday, Aug. 6, 2022. Historic flooding on Friday, Aug. 5, 2022, trapped about 1,000 people in the national park. Crews said all park roads will remain closed through the weekend. (CanTrans9 photo) 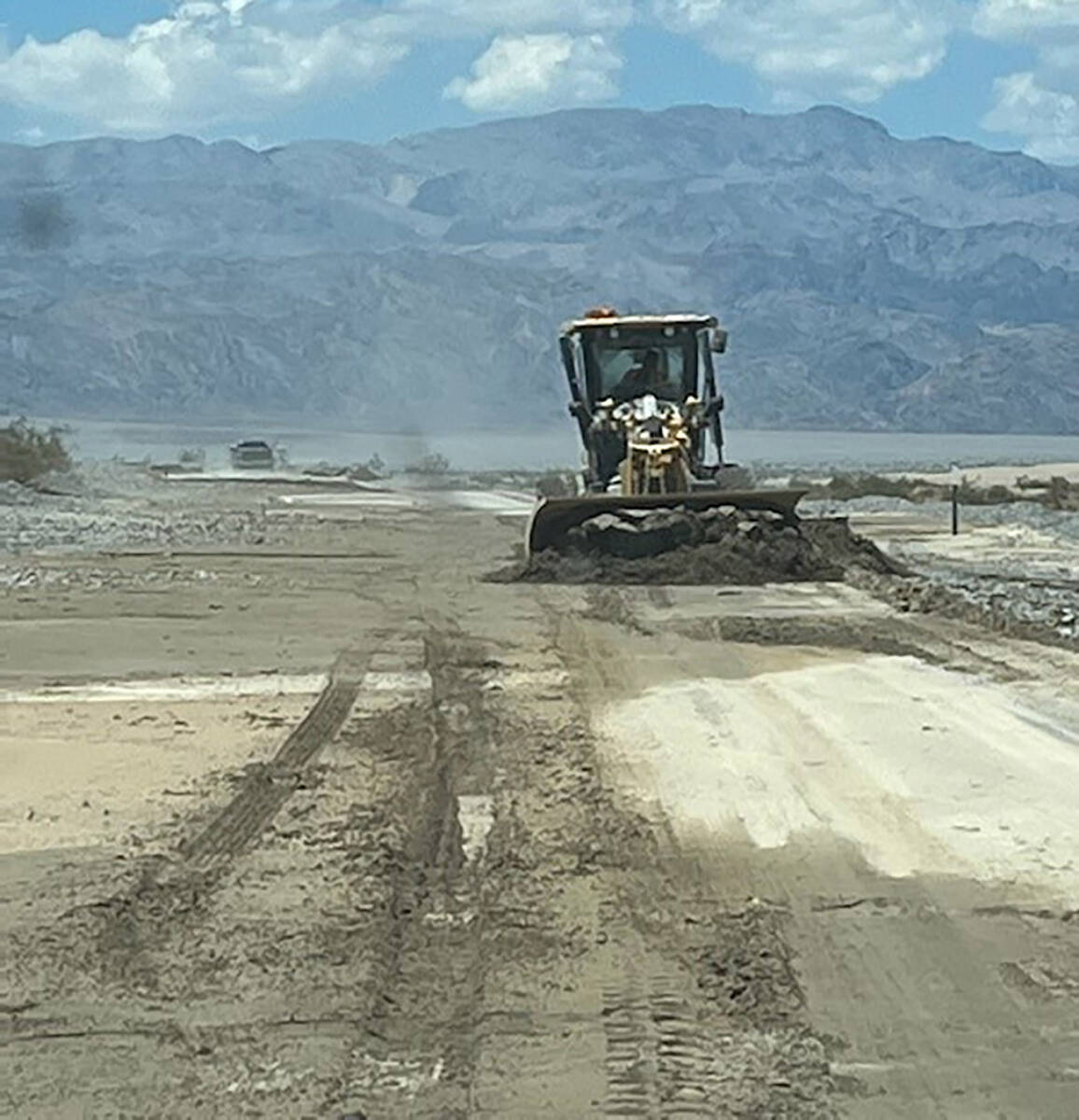 A bulldozer works to clean mud from California Route 190 in Death Valley National Park after heavy rain and flooding on Friday, Aug. 5, 2022, closed all roads in the 3.4-million acre park. Roads are expected to be closed until the middle of the week. (CalTrans9 via Twitter)

Heavy debris flows kept 1,000 people from getting out of the park right after the storm.

Those stranded after a near-record 1.46 inches of rain were able to head home with the help of law enforcement escorts, spokeswoman Nico Ramirez said in an email Saturday.

#District9onDuty: Maintenance crews are continuing their work on SR 190. The highway will stay closed into next week as there is still a lot of cleanup that needs to be done throughout @DeathValleyNPS. Drivers should not attempt to get around any closure to access the park. pic.twitter.com/IHYL3KYWm0

The California Highway Patrol flew a H82 helicopter Friday, and the Navy was conducting an overflight with VX31 out of Naval Air Weapons Station China Lake on Saturday, the National Park Service said in a news release.

“At this time, there are no reported stranded visitors on park roadways and no reported injuries from this incident,” the release stated.

ATTN DRIVERS: @Caltrans9 maintenance crews continue to make progress on State Route 190. Here is a before and after shot of one section of highway within @DeathValleyNPS.
As a reminder, State Route 190 will remain closed into next week. Death Valley National Park is also closed. pic.twitter.com/MTDQx96r3G

California Department of Transportation crews will be working through the weekend to clear roads. Workers from CalTrans9 began efforts Friday afternoon and hoped to have Route 190 open within six hours. In a tweet Saturday morning, CalTrans9 said all park roads remained closed and work would continue through the weekend.

A tweet in the afternoon showed massive debris and rock fields covering some roads, but Saturday evening a tweet showed a road pretty much cleared. But the advisory remained that all park roads were closed.

ATTN DRIVERS: State Route 190 will remain closed through the weekend as crews continue to clean up the highway from Friday's flash floods. @DeathValleyNPS is ALSO CLOSED and drivers should not attempt to get around any closure to access the park. pic.twitter.com/2GQc97aVxX

Highway 190 is expected to reopen between Furnace Creek and Pahrump by Tuesday, according to the park service.

In most areas, floodwaters have receded, leaving behind extensive mud and gravel deposits.

Here is a look at some of the flood waters currently pouring over State Route 190 through @DeathValleyNPS . The highway, which stretches from Olancha to Death Valley Junction, remains closed at this time due to flooding. pic.twitter.com/z8M4N6ARKH

— Highway 190: areas of undercutting, complete shoulder loss, and asphalt damage. About 20 palm trees fell into the roadway by the Inn at Furnace Creek. Debris flows in numerous areas, and floodwaters still over the road at Devils Cornfield as of this morning.

— Residential water lines in Cow Creek were blown out in multiple locations. Some water availability was returned to housing, but offices (including the Emergency Operations Center, maintenance buildings, and residential dorm) remain without water.

The towing companies will have their work cut out for them today. pic.twitter.com/iDZ7sI6EMW

“With the severity and widespread nature of this rainfall it will take time to rebuild and reopen everything, and we appreciate your support and patience as we continue this work,” park superintendent Mike Reynolds said in the release.

“With over 1,000 miles of roadway in the park, and 3.4 million acres, this is not an exhaustive list and it will take time to get a full assessment of the damage,” the release states. “Due to access issues, we do not have updates for many sections of the park, including Scotty’s Castle.”

At least 60 cars were buried under several feet of debris at the Inn at Death Valley, the park service said.

Many businesses and hotel rooms in and around the park were also flooded.