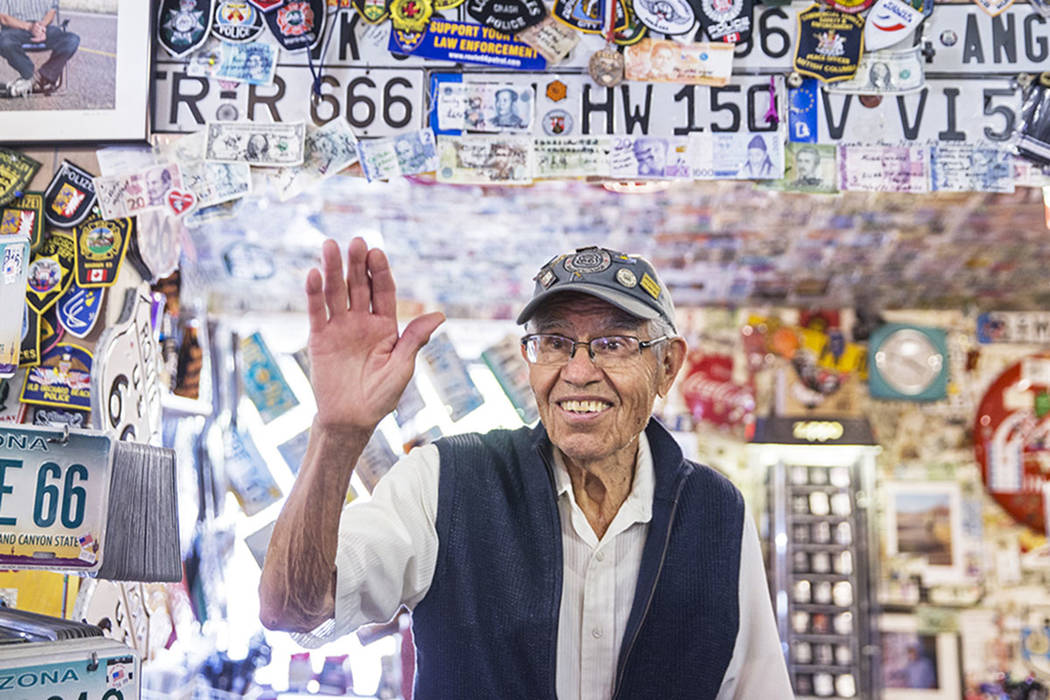 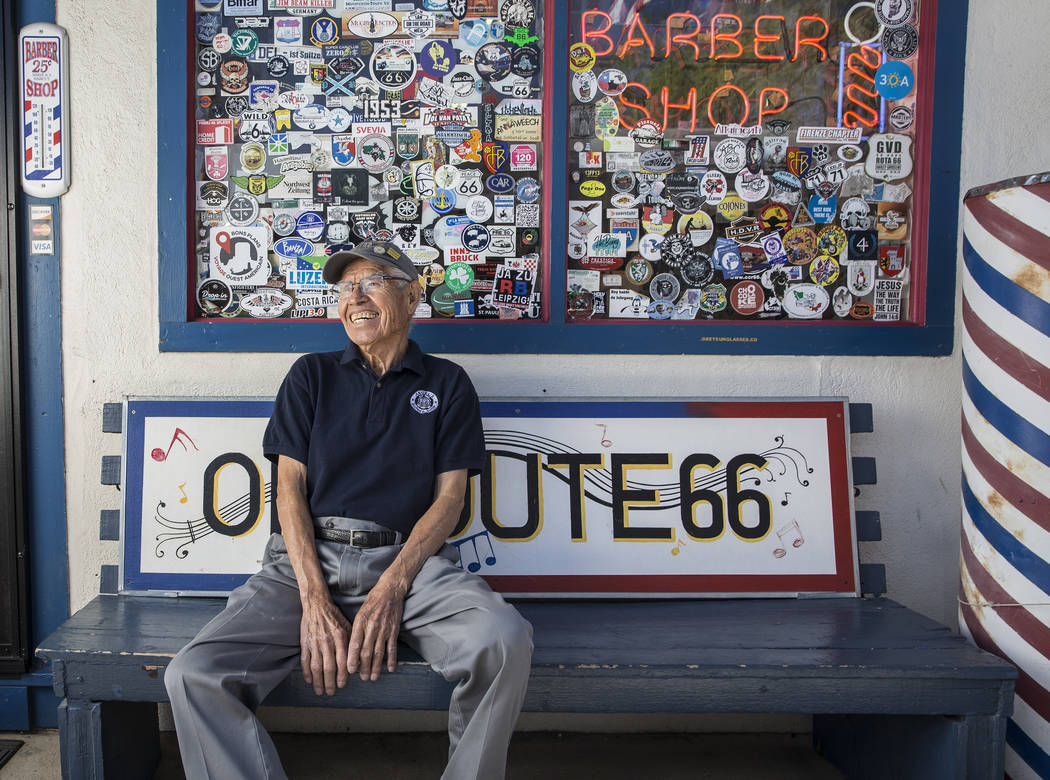 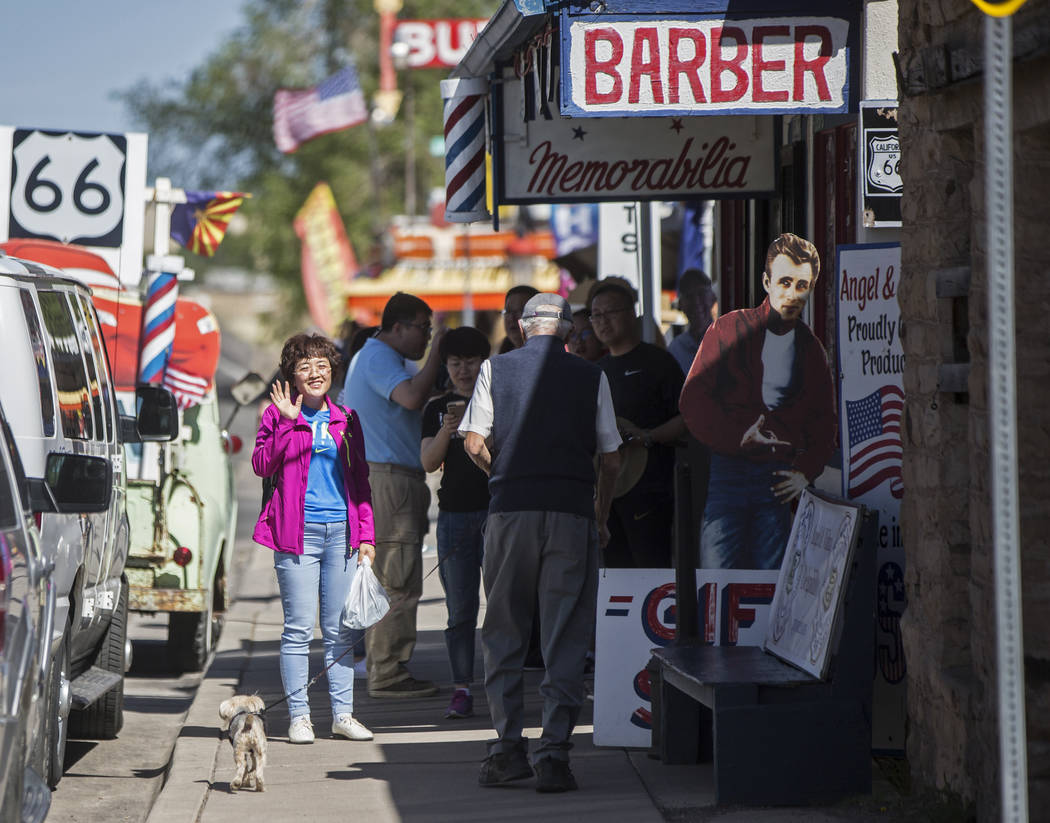 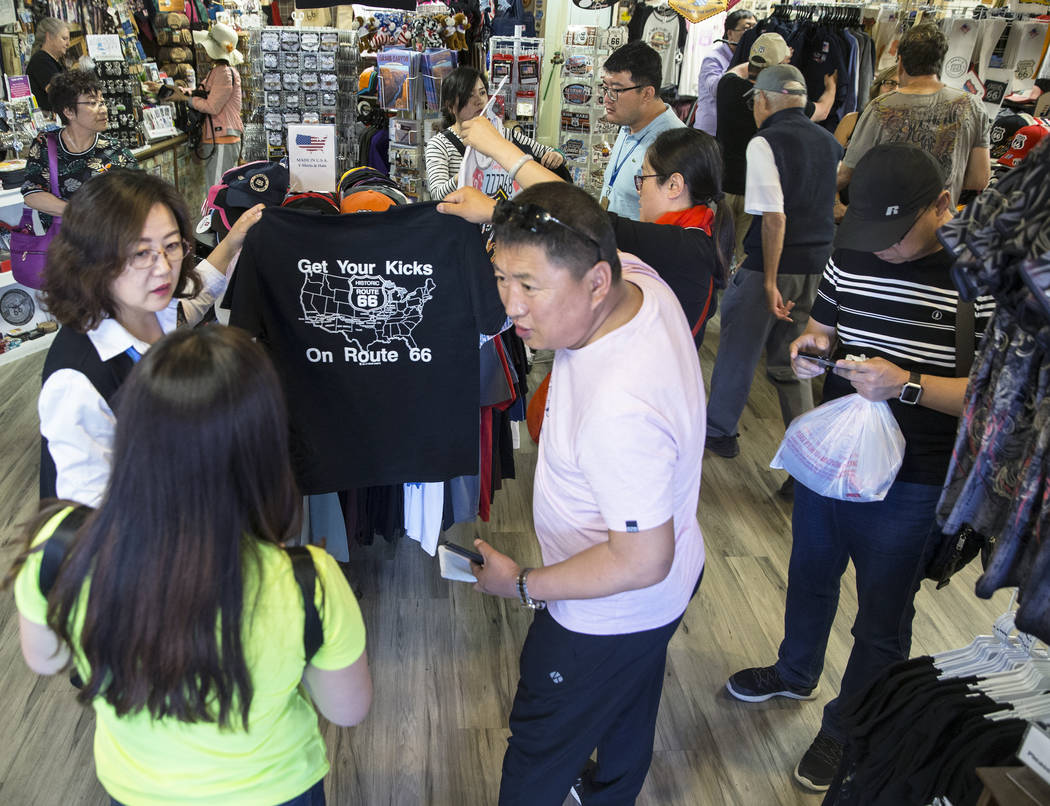 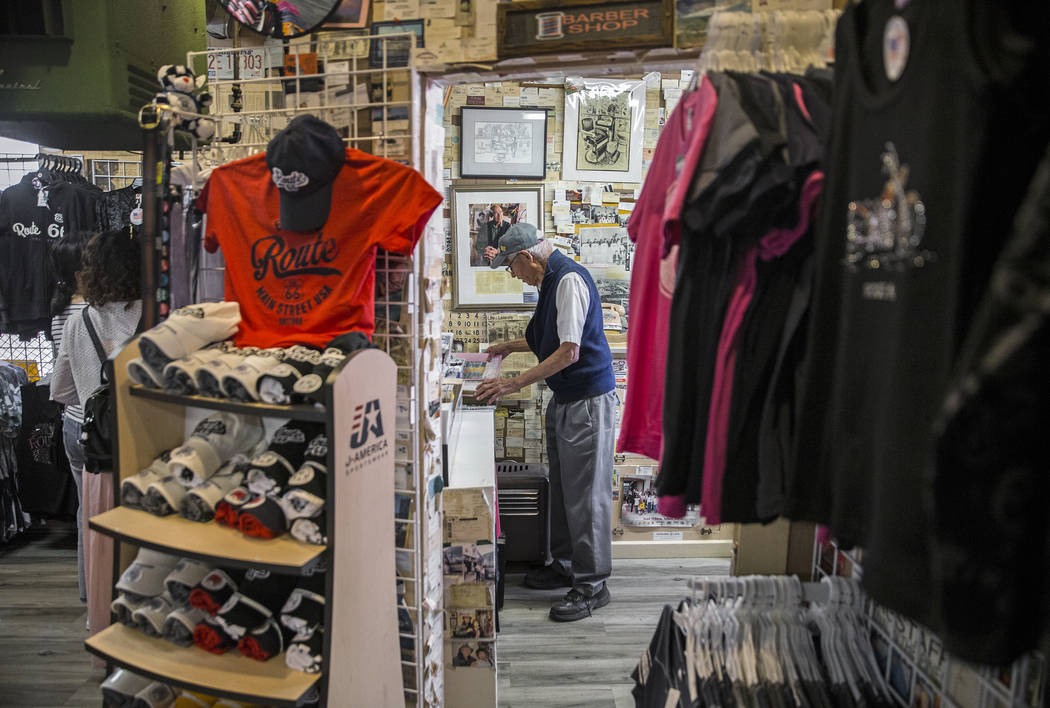 Angel Delgadillo, 91, known as the Angel of Route 66, works in his office at Delgadillo's Route 66 Gift Shop on Wednesday, May 16, 2018, in Seligman, AZ. Benjamin Hager Las Vegas Review-Journal @benjaminhphoto 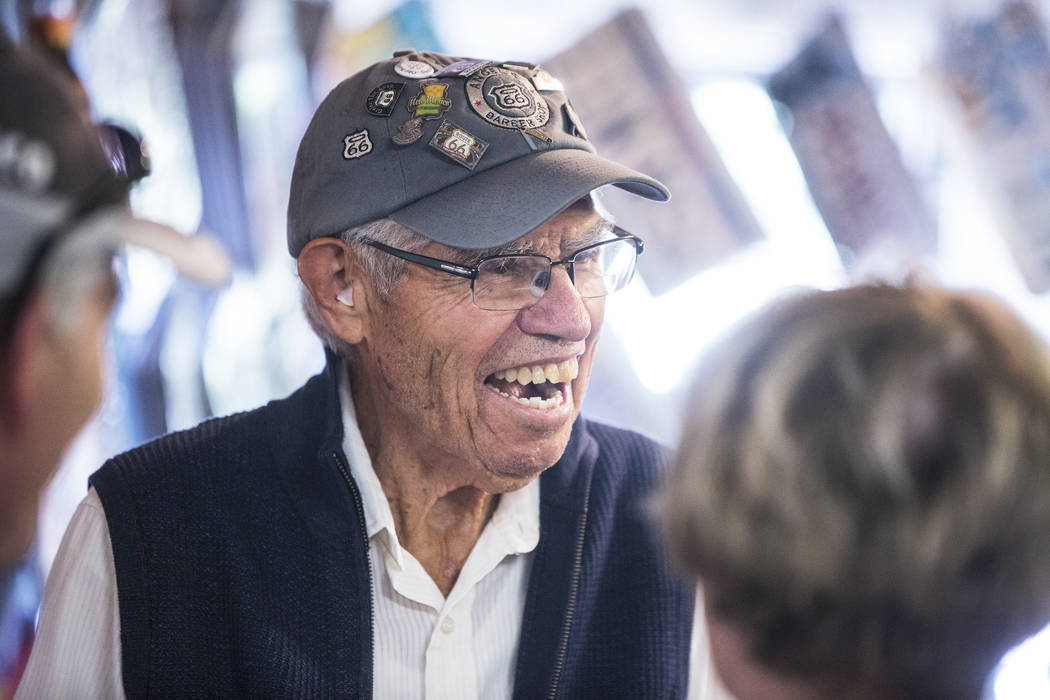 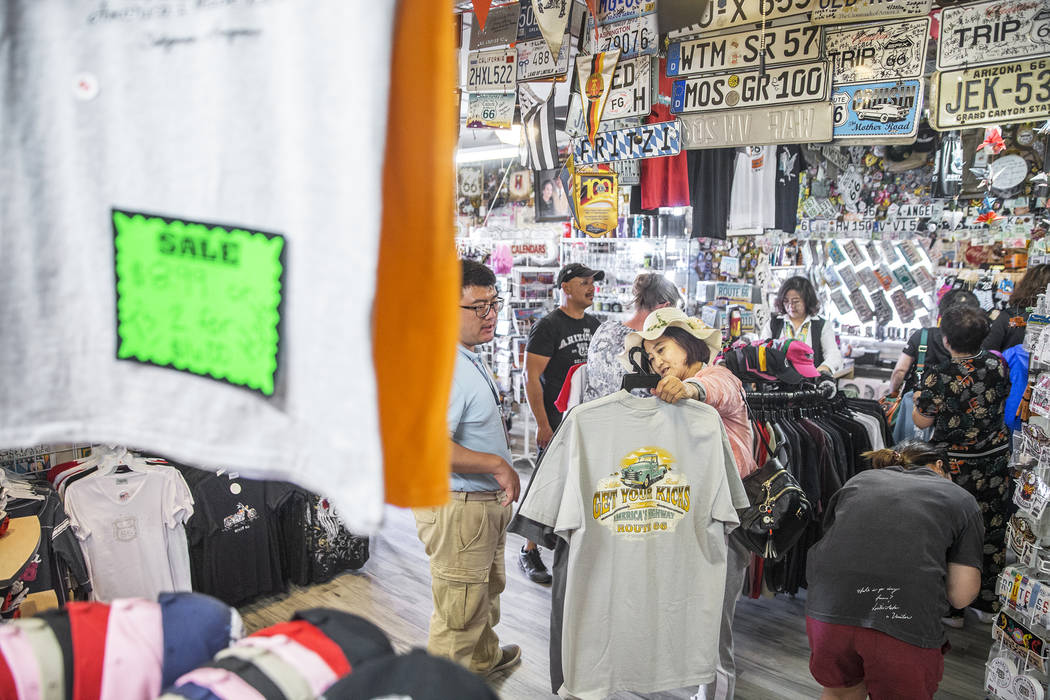 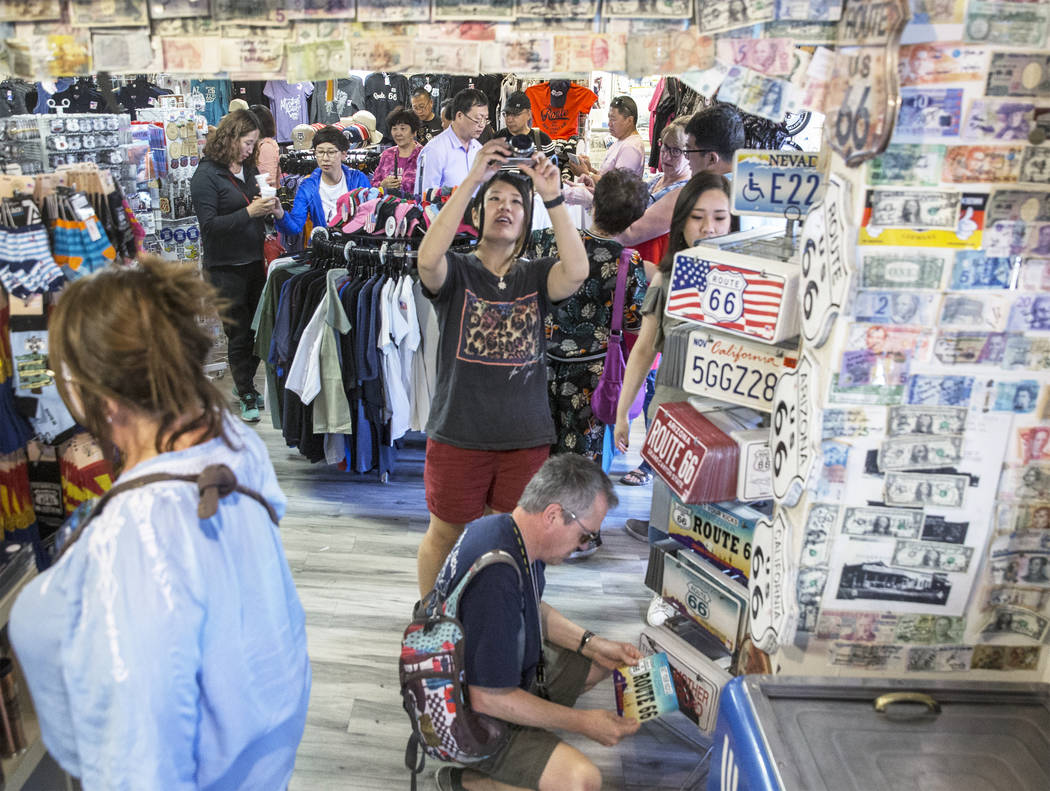 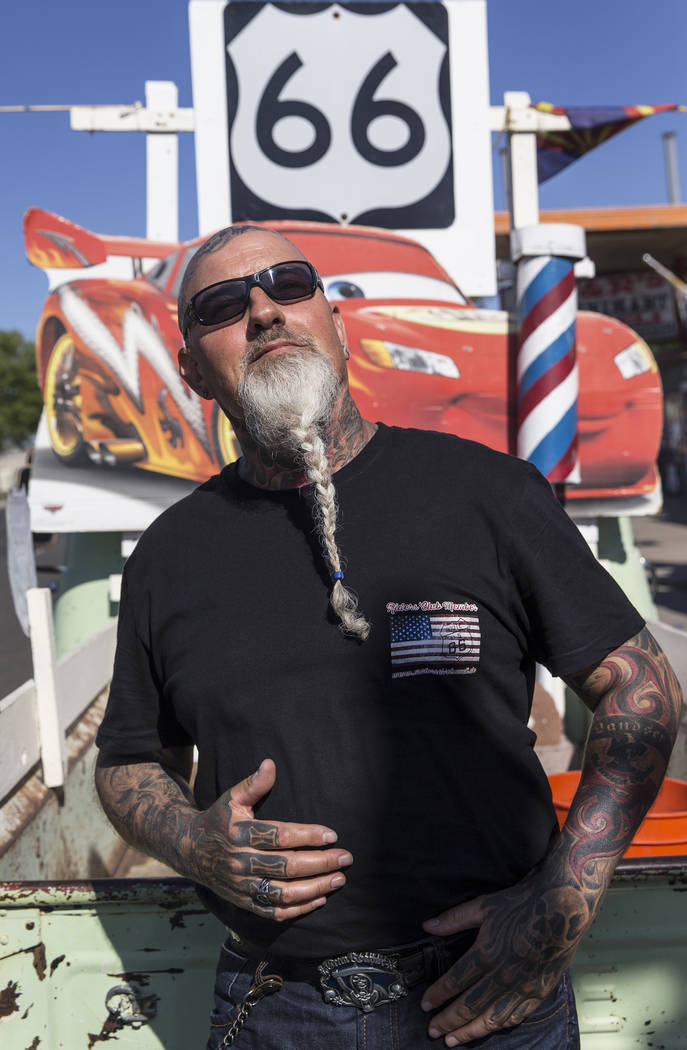 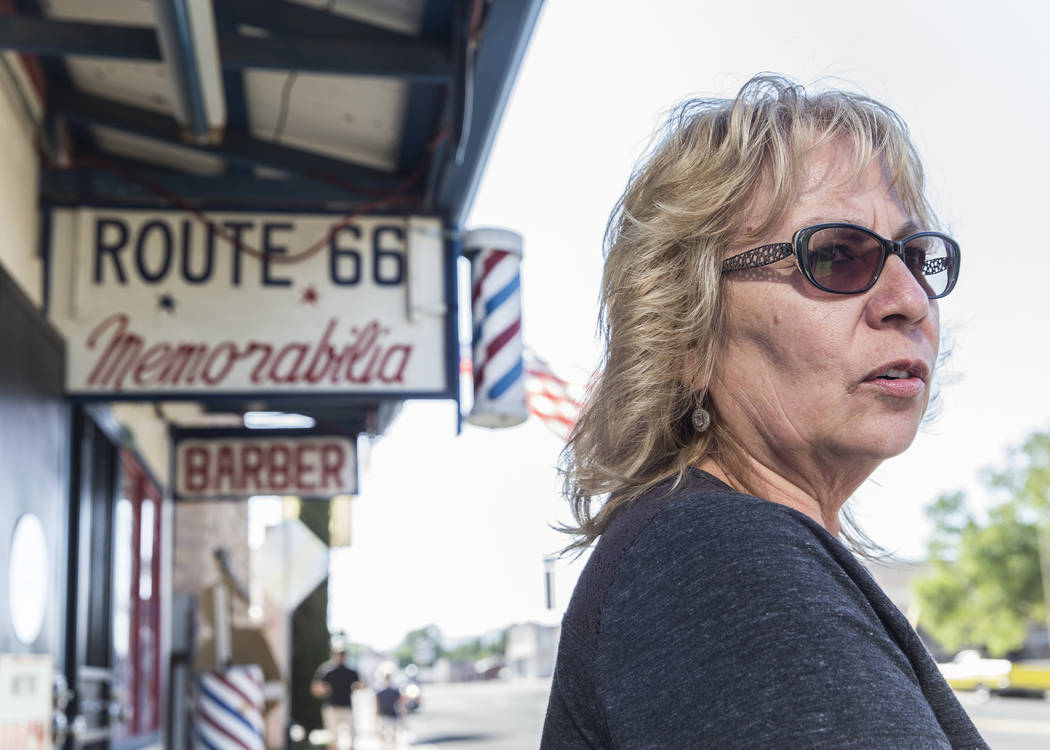 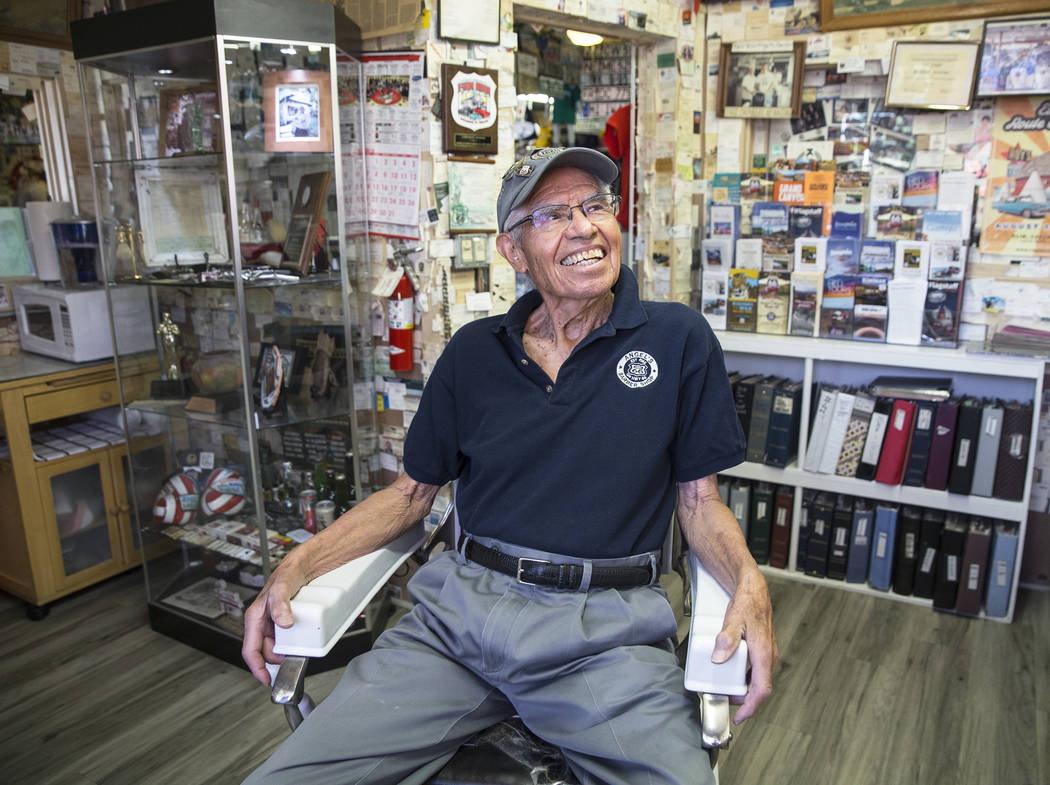 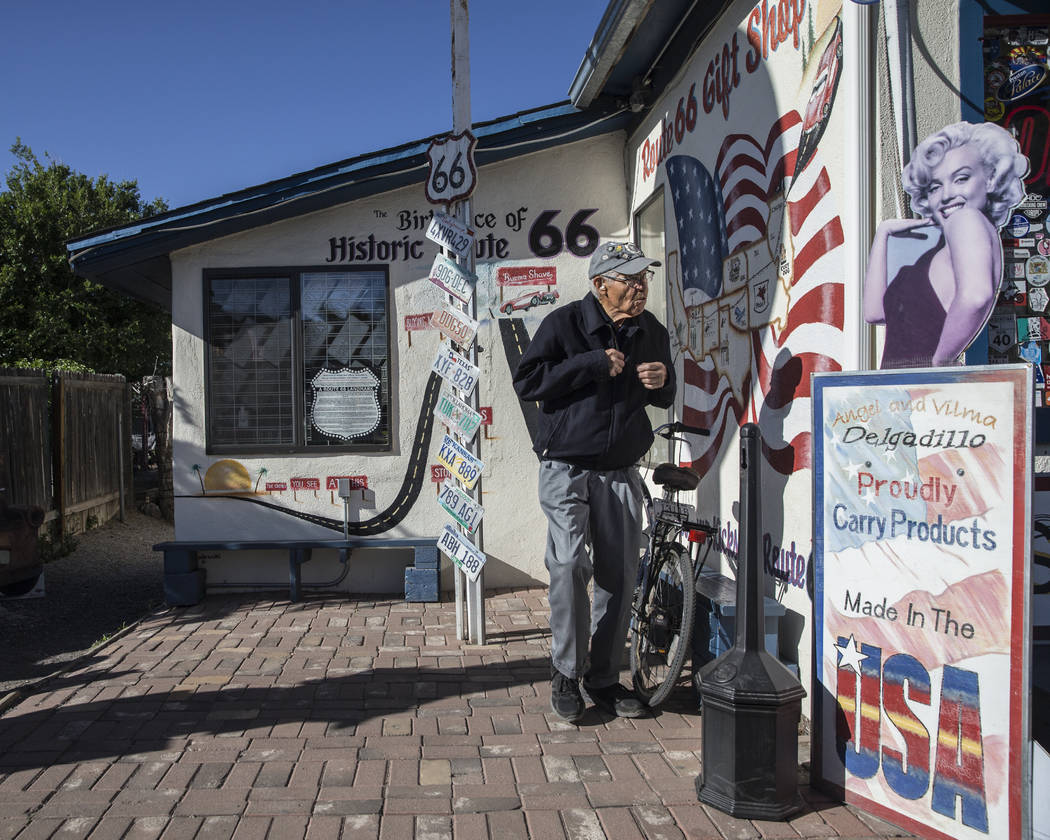 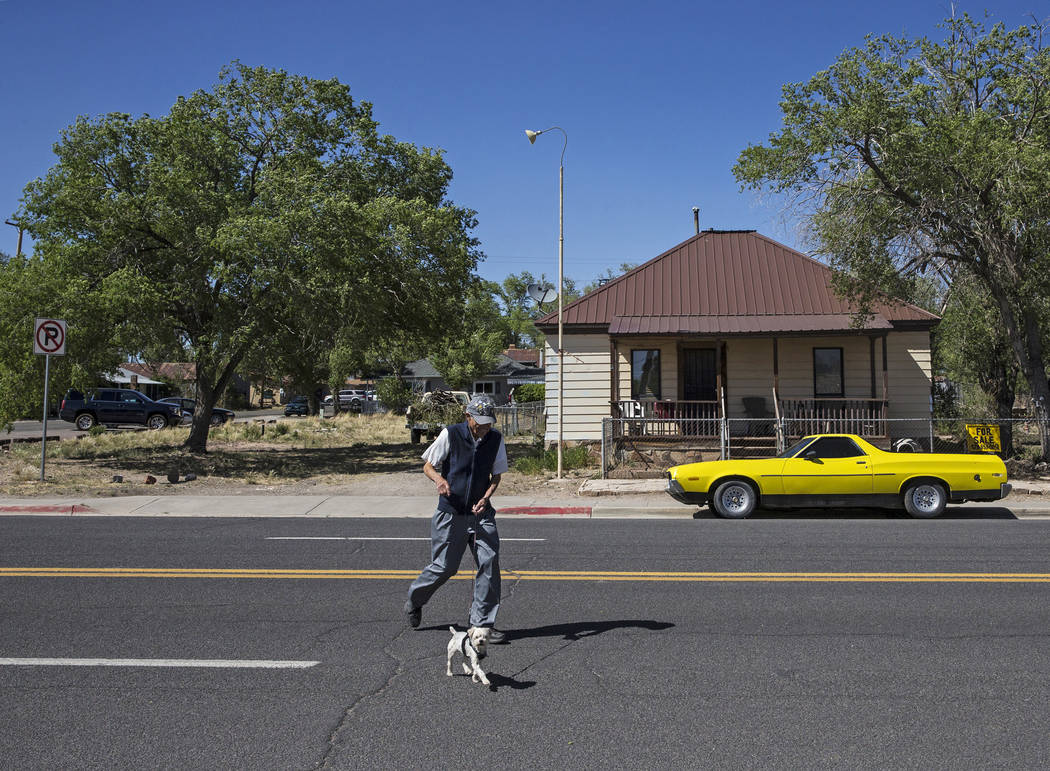 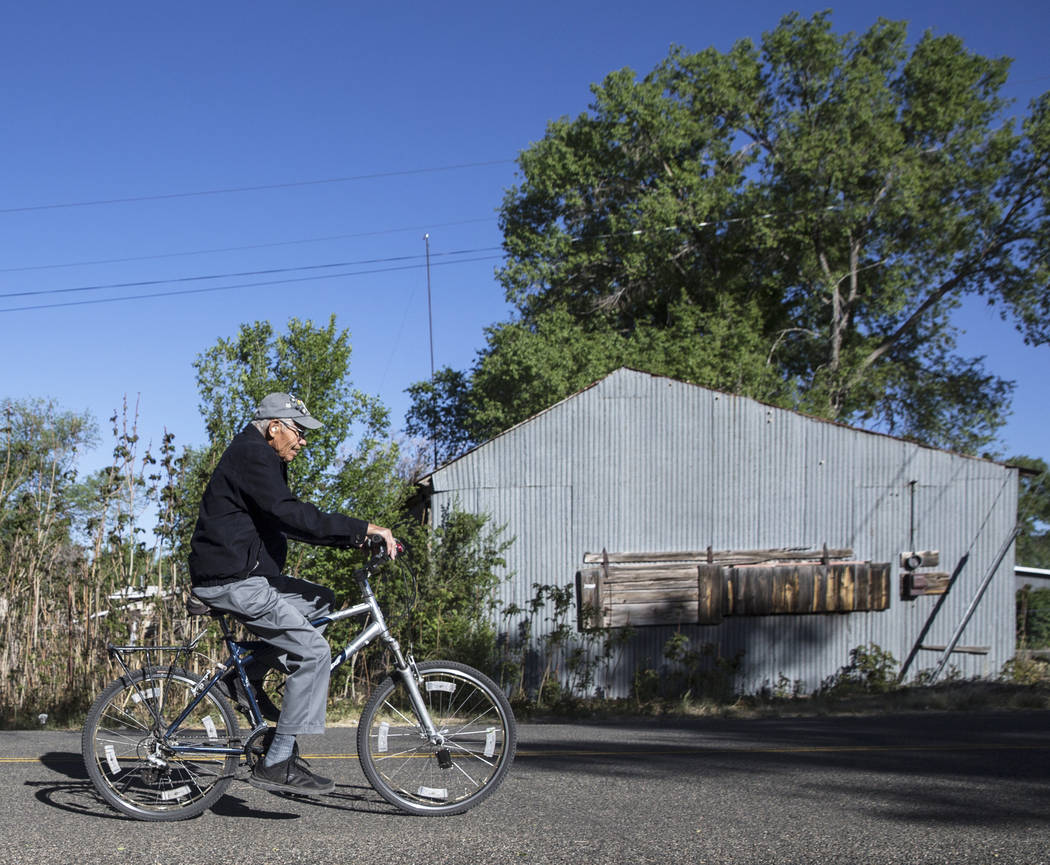 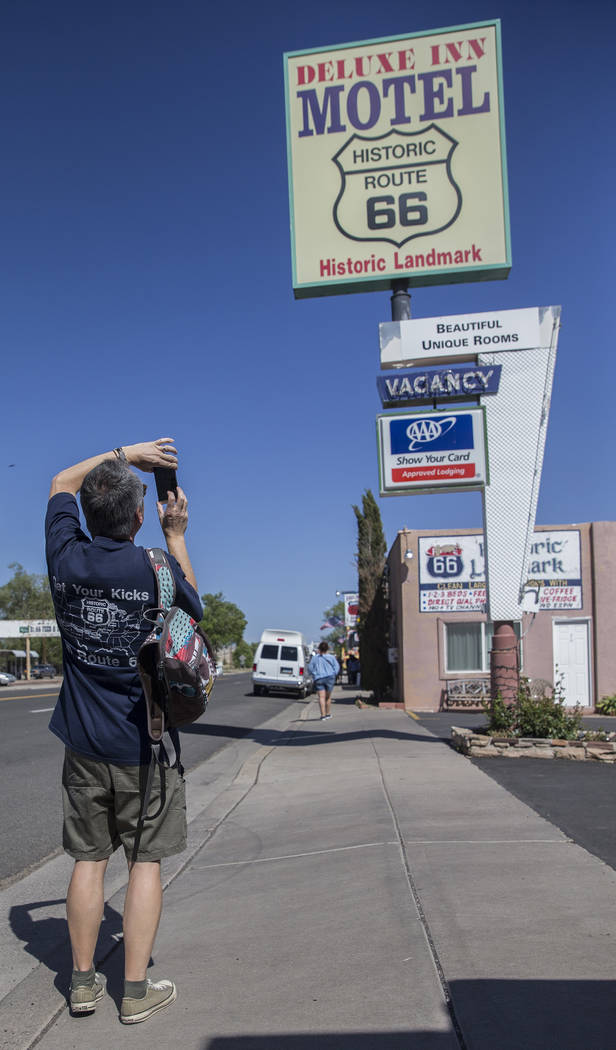 Tourists take photos of the signage at the Deluxe Inn Motel on Wednesday, May 16, 2018, in Seligman, AZ. Benjamin Hager Las Vegas Review-Journal @benjaminhphoto 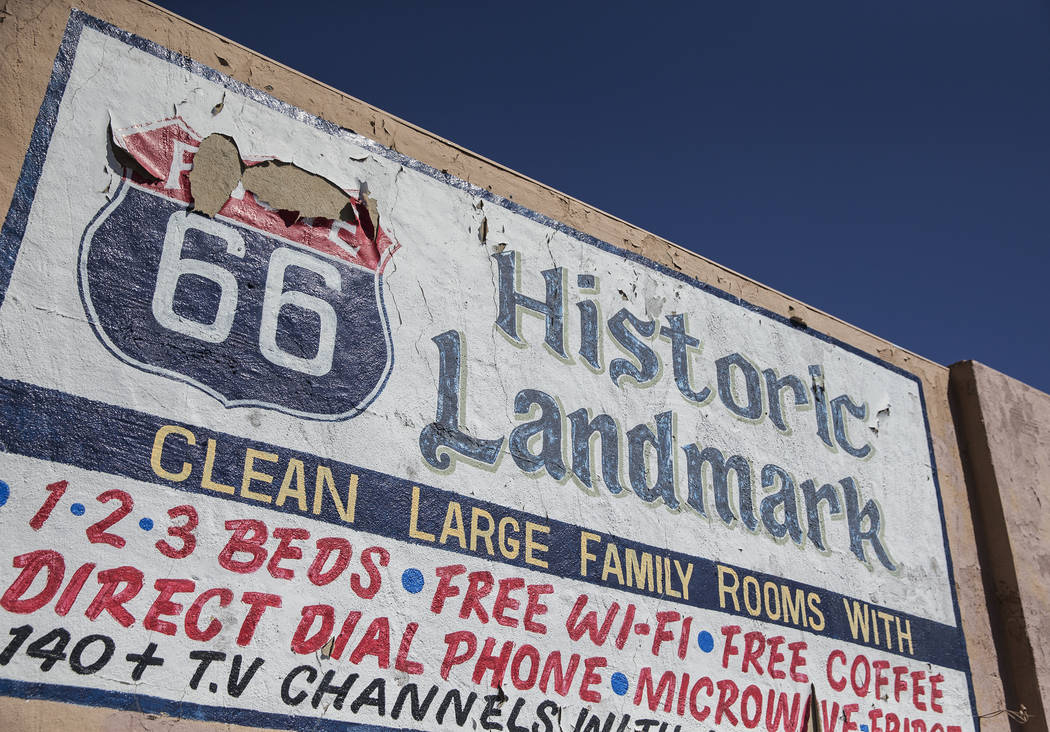 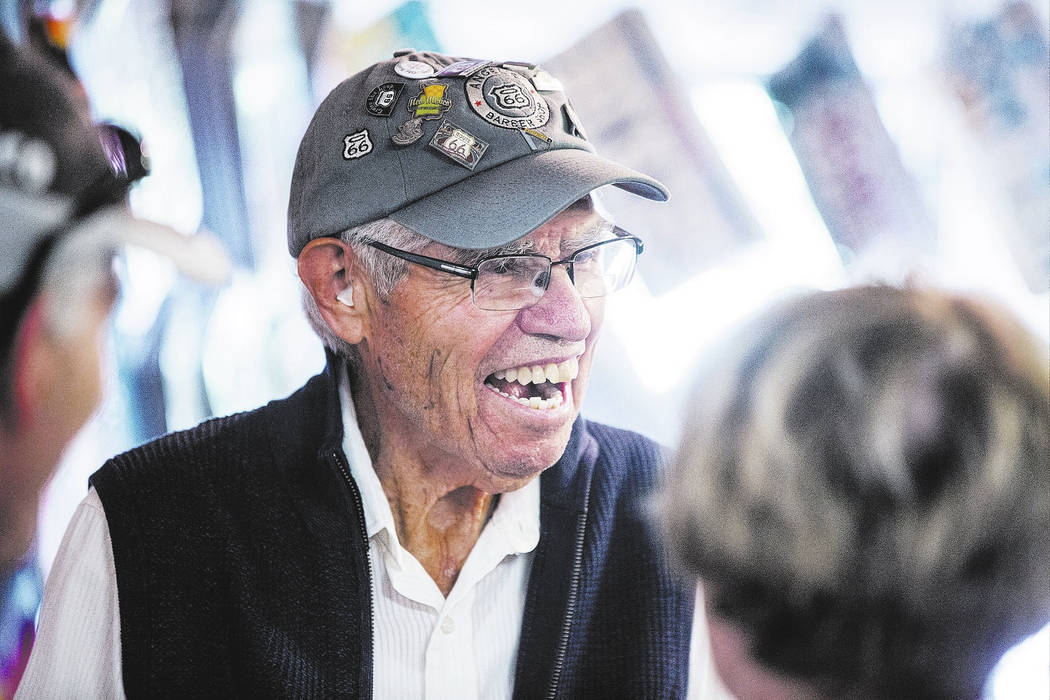 SELIGMAN, Ariz. — Most mornings, the 91-year-old Mayor of the Mother Road rides his bicycle the few short blocks to his office, a bustling souvenir shop along old U.S. Route 66, the venerable long-sidelined highway that has defined his life.

As he rests his bike against an outside wall, hordes of Angel Delgadillo’s fans often wait to greet him. Most arrive by tour bus, herded by guides during a respite from a Grand Canyon excursion, tourists from China, Japan, Spain, Germany and the Czech Republic.

For years, he has greeted each in their own language as they shake the hand of the polite gentleman who’s gone a bit hard of hearing, the one they consider a modern-day cultural hero.

They want to hear the story about how decades ago, as a middle-aged barber, Angel waged a public relations war against a government office that had decommissioned the highway through his beloved hometown, retiring a road that had become his life’s emotional thread. Eyes wide, cameras clicking, they want to hear how he rallied his community, and eventually a nation, to post a stop sign to progress, if just for a little while, and preserve a tiny piece of America’s motoring past.

And Angel obliges. He tells them how — backed by his stalwart wife, Vilma — he helped inspire a full-throttle Route 66 revival, bringing an old road, a deflated town and a regional economy back from the dead. He finally convinced state transportation officials, who in 1978 had decommissioned the route as a national artery, to memorialize the road as an historic highway. Eventually, others along the road’s eight-state route from Chicago to Santa Monica followed suit.

In recent years, Angel has become synonymous with the nation’s keepsake road, and dubbed the “Guardian Angel of Route 66” and often just “The Ambassador.” He’s been the subject of pop songs and even made a cameo appearance — after the end-of-movie credits — in the animated Pixar film “Cars,” where the spirit of his battle plays out in the fictional town of Radiator Springs.

Outside the tiny Delgadillo’s Route 66 Gift Shop, which sells all kinds of kitschy road-themed merchandise — from golf balls and oven mitts to whisky flasks — a life-size cardboard cutout of Angel stands ready to greet customers when the real deal isn’t around.

Nearby is a cardboard figure of Hollywood icon James Dean. But Angel’s fans say there’s a difference between the two — their rebel had a cause.

“Boy, oh boy,” he tells them. “Everything I’ve done has been done on Route 66. I’ve spent all of my life along this road.” Then his voice hardens and he stabs his finger: “To save this road, we had to fight a government! And we won!”

The personal thread between the mayor and his mother road remains profound. Angel was born in Seligman in 1927, the year after Route 66 was signed into law as one of the original U.S. Highways. In the 1930s, the route led Dust Bowl victims west to a new life following the devastation of their crops and way of life. John Steinbeck termed Route 66 the “Mother Road” in his book “The Grapes of Wrath” about a broken Oklahoma family struggling to reclaim its dignity.

Back then, Angel and his eight siblings — children of a self-taught local barber — played games along the road, creating characters with the shadows cast by the headlights of passing cars at night.

They saw an endless caravan of dejected Dust Bowl victims who passed through town. A Model-T Ford with one mattress dangling from the back signaled a poor family; two mattresses meant they were rich was a running joke.

Years later, Route 66 beckoned a more-carefree adventurer, serving as the main route for vacationers headed west to Los Angeles. Inspiring such quirky roadside attractions as tee pee-shaped motels, frozen custard stands and Indian curio shops, the road became a microcosm of the nation’s evolving post-war culture, now linked by the automobile. Some called it “The Main Street of America.”

Along the way, motorists snapped their fingers to the 1946 hit “(Get Your Kicks on) Route 66” and in the 1960s followed the misadventures of Tod Stiles, who drove his Chevy Corvette convertible in the TV series that took its name form the iconic road.

As Route 66 matured, so did Angel. Yet he rarely ventured more than a few miles from the road. He attended barber college in one Route 66 town (Pasadena, California) and did his apprenticeship in another (Williams, Arizona). In 1950, he returned home to open a joint barbershop and pool hall. For years, he played saxophone in a family orchestra that played in honky-tonks along the road.

By the late 1970s, three of Angel and Vilma’s four children were in college. Life was a challenge on a barber’s salary, but Angel was happy. Along with regular customers, the road brought a stream of tourists with their stories and regular revenue.

Then the world stopped.

Some towns fall prey to a prolonged decline; Seligman died in a single afternoon. Angel can recite the precise moment life as he knew it ceased to be:

That’s when state highway officials in nearby Kingman cut the ribbon on the latest stretch of Interstate 40, a modern road for a modern America, along which impatient travelers could drive faster and reach their destinations sooner, more directly, without negotiating the often dangerous two-lane Route 66, which for many had become as obsolete as the Model-Ts that once traversed it.

Seligman residents had known the interstate highway was coming. “We just didn’t realize how devastating it was going to be,” Angel says. “After I-40 opened, you could lay down in the middle of the street in Seligman and not get run over.”

Traffic through town went from 9,000 cars a day to a mere trickle. “The traveling public went its own way, and we were forgotten,” he says. “You don’t know how long 10 years is when you’re overlooked by the entire world.”

Back then, Angel was just 51, and knew he still had a few good years left in him. Still, he watched businesses fold. People left town.

Daughter Mirna recalls a family dinner when her father announced that they might have to relocate. She and her sister, Clarissa, began to cry. Seeing his family so broken, Angel got angry.

For years, Angel and his brother, Juan, sat under the outdoor awning of Juan’s Snow Cap drive-in and plotted how to revive Seligman’s economy.

Then came an idea.

Why not designate Route 66 as a historic highway — at first from Seligman to Kingman — market the stretch with ad campaigns and historic signs, and bring back America’s traveling public, if just for nostalgia’s sake?

In February 1987, Angel’s newly formed Historic Route 66 Association of Arizona began to pitch the idea to anyone who would listen — politicians, transportation officials, various chambers of commerce, even friends and neighbors. There were phone calls, letters and personal visits. Then more followup letters and calls.

Angel ignored the naysayers. “We waited and waited with no answer,” he recalls. “Then we waited some more. But we were products of the Depression. We knew hard times and didn’t know what the word ‘no’ meant. We didn’t let them off the hook.”

‘Stay who you are’

Finally, the efforts paid off.

That November, 10 months after Angel launched his campaign, Arizona officials added Route 66 to the list of the state’s historic roads. Other states soon followed.

Angel continued to cut hair in his little shop with the ripped barber chair but converted the adjacent pool hall into a souvenir shop. The reporters come in droves to interview the stubborn old man who stopped time.

The motorists returned to Route 66 and Seligman, now home to 10 souvenir shops. Older motorists said they missed the small-town whimsy of the route their parents once drove. The movie “Cars” brought an entire new generation of fans to Route 66 — and Angel.

Now he offers a bit of advice along with the occasional autograph: “If you want something bad enough, get out there and work for it,” he tells youngsters. “Extend yourself. Pay the price. And you’ll succeed.”

At the very start of celebrity status, Vilma had some advice for her headstrong husband. “Don’t you let it all go to your head,” she told him. “Stay who you are.”

Father of the rebirth

Angel hasn’t changed. He still plugs the merits of his old highway, even convincing a Canadian tourist to open a Route 66 fan group way up in British Colombia.

“Angel is the father of the rebirth,” said Lorrie Fleming, founder of the Canadian Route 66 Association. “The revival struck a chord with me. But Angel struck an even deeper chord. There’s something about that man. He grabs at your heart.”

In recent years, however, Angel has shifted into a lower gear. He spends less time at the shop, leaving the business to his two grown daughters and son-in-law. He prefers to spend more time at home with his wife, but still pedals over on his bike when he gets the call that fans are asking about him.

Eventually, the couple will be buried not far from Route 66. “I’m happy it will be here for a few more generations,” he says. “I want this road to outlive me.”

Even after he’s gone, Angel’s life size cut-out figure will be there at the front door, greeting fans with that wide, big-toothed smile, his hand extended, ready for a shake, as the timeless Mayor of the Mother Road.