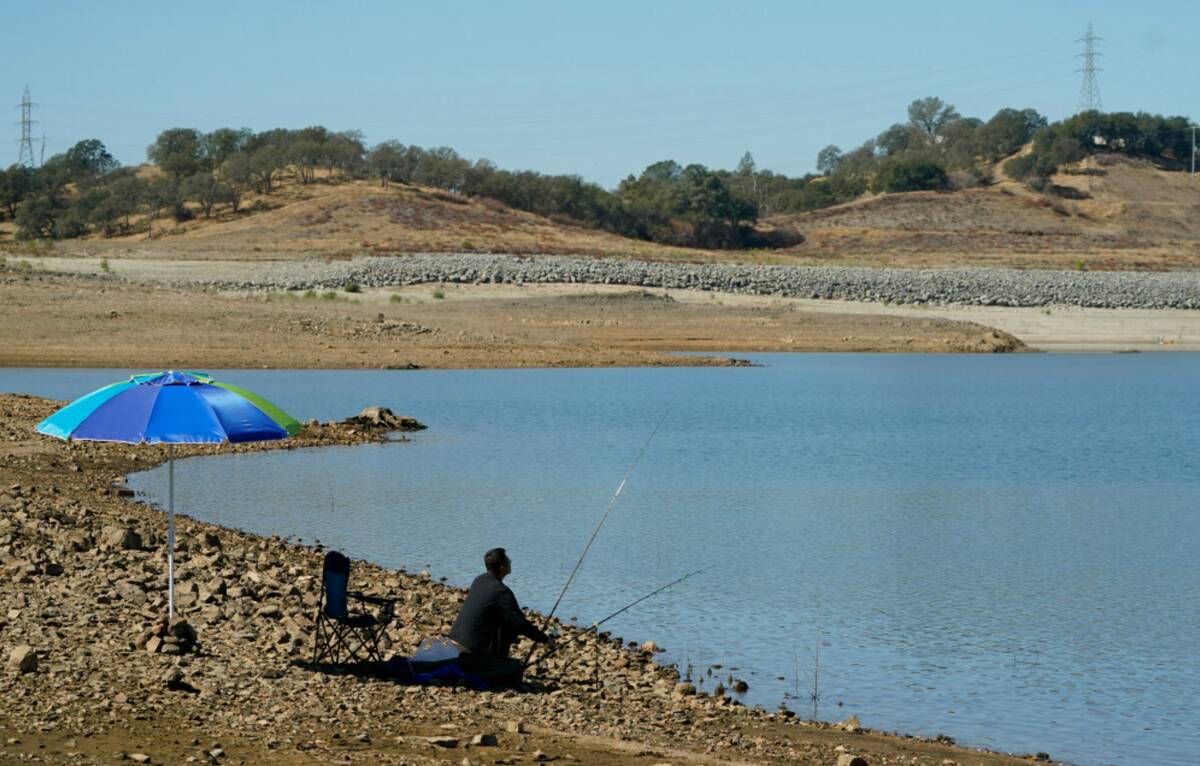 A man places his fishing pole along the shore line of Folsom Lake that would normally be underwater in Folsom, Calif., Monday, Oct. 3, 2022. (AP Photo/Rich Pedroncelli) 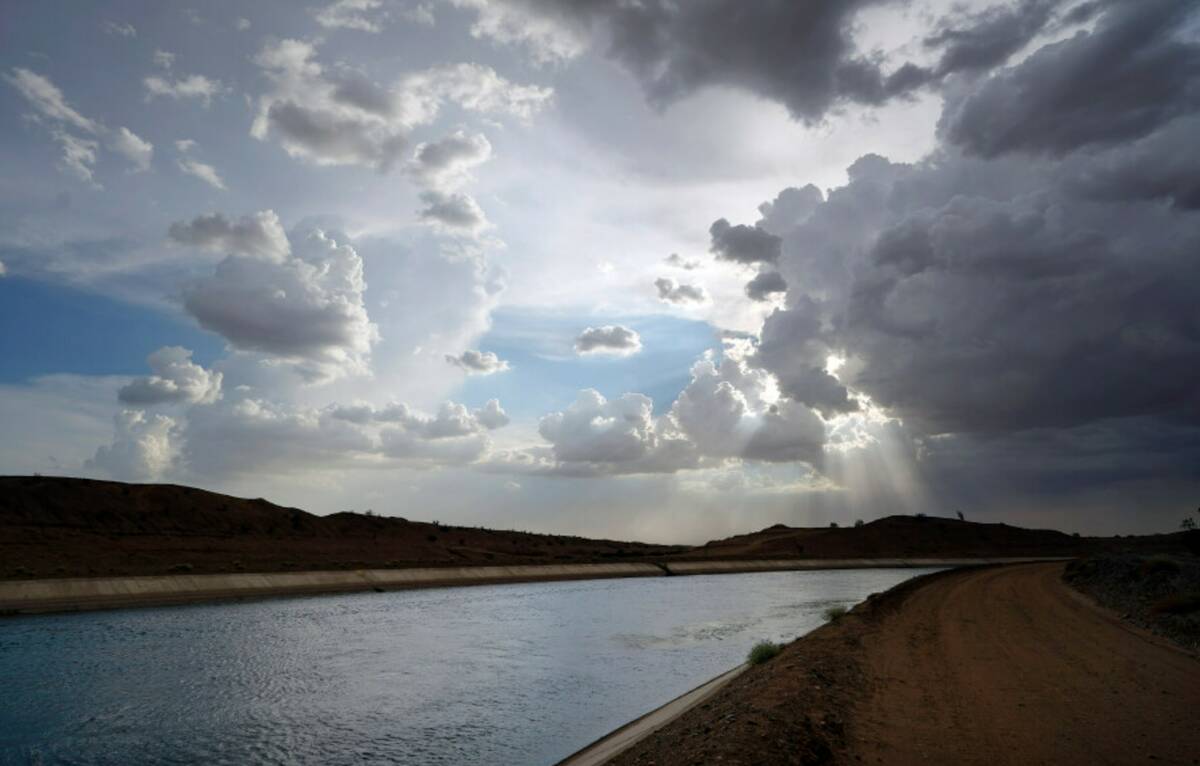 As pressure mounts for Colorado River states to conserve water amid worsening drought conditions, California water agencies said they are prepared to cut their use by nearly 10 percent starting next year.

In a letter sent Wednesday to the U.S. Department of Interior, the four agencies said they are prepared to conserve 400,000 acre-feet annually starting next year and running through 2026. That water would in turn be held back in Lake Mead, the nation’s largest reservoir that has dropped roughly 170 feet since the drought began roughly two decades ago.

Federal officials in June called for cuts of 2 million to 4 million acre-feet annually along the Colorado River starting next year to prevent its two main storage reservoirs of Lake Mead and Lake Powell from falling further to points that would threaten the ability to deliver water and electricity to millions who rely upon the system across the West.

The states failed to come to any agreement by a mid-August deadline set by the federal government, but talks have continued between Western water managers.

In a statement Thursday, the Southern Nevada Water Authority called California’s letter a “step in the right direction,” but said that states need to make permanent water use reductions, such as those undertaken by Southern Nevada in recent years, if they are going to meet those goals and stabilize the drought-stricken river.

“As long-term arid conditions continue to affect the Colorado River and water supplies for the West, reducing water use across the Colorado River Basin has never been more important,” the authority said. “Southern Nevada, which has already decreased per-person water use by 48 percent over the past two decades, is currently advancing a number of additional, permanent conservation measures, including mandatory grass removal, changes to development codes, and new regulations and fees for water use that will further reduce our community’s consumption of Colorado River water.”

The proposed cuts from the California agencies would amount to 9 percent of the state’s annual share from the river, and represent the first public commitment to conserve a specified amount of water along the basin since the federal government called for voluntary cuts earlier this year. It’s unclear exactly how those California agencies would implement those cuts, as the letter provides few specifics about the plan.

“Given dire drought conditions across the region and dangerously low reservoir levels, we firmly believe that all water users within the Basin must take immediate voluntary actions to stabilize water supplies in the Basin’s major reservoirs,” they wrote in the letter. “This water, which would otherwise be used by California’s communities and farms, will meaningfully contribute to stabilizing the Colorado River reservoir system.”

California owns the largest share of water rights among the seven basin states that pull from the river, with an annual allocation of 4.4 million acre-feet, the majority of which is used to irrigate farmlands. It’s also the last to face cuts during water shortages and has thus far avoided any mandatory cuts under previous agreements signed in 2007 and 2019.

Under those agreements, Arizona and Nevada were forced to cut their shares last year after the federal government declared the first water shortage at Lake Mead, and will face deeper cuts next year after a second shortage was declared in August. Nevada’s allocation will be cut by 25,000 acre-feet, or 8 percent next year. Arizona’s 2023 share will be cut by 21 percent, or about 592,000 acre-feet.

The states in the upper basin — Wyoming, Colorado, Utah and New Mexico — submitted their plan to the federal government in July in which they laid out a five-point plan on how they would look to reduce water use, but did not go as far as committing to any set amount of cutbacks.

“At first glance, it feels like a pretty small drop in a pretty big, pretty empty bucket in the basin. This is coming from the area that uses, and sometimes overuses, the largest share of Colorado River water,” said Elizabeth Koebele, an associate professor at University of Nevada, Reno who studies water policy and governance.

But that 400,000 acre-foot number is bigger than Nevada’s entire annual allotment, she noted.

“Symbolically it’s important,” Koebele added. “For them to show some voluntary leadership on these matters seems really important and I think its smart and benefits them, too.”

The cuts from California will lean on federal funding that is coming through the Inflation Reduction Act, which allocated $4 billion to fight the western drought, according to the letter. Some of that money is expected to go to temporary measures, such as paying farmers to fallow farms, but some have called to focus those funds on projects and programs that would permanently reduce use along the river.

And the agencies said that the state’s willingness to make those reductions would depend on a commitment from the federal government to contribute to the “stabilization efforts at the Salton Sea.”

Koebele said that Salton Sea contingency will play a significant role moving forward, as it has been a major sticking point in prior negotiations. Reducing water use in the Coachella Valley Water District and Imperial Irrigation District leads to less runoff to the Salton Sea, which is already causing air quality problems due to blowing dust left exposed by the receding shoreline.

Tom Buschatzke, director of the Arizona Department of Water Resources, said Thursday that the commitment from the California agencies “is absolutely a good step in the right direction.”

“It’s still probably less than we would like to see in relation to the balance between Arizona and California,” he said, adding that the 400,000 acre-foot number from California was essentially where negotiations left off in August.

Ultimately, Buschatzke said he doesn’t think the basin states will meet the federal government’s goal to cut 2 million-to-4 million acre-feet voluntarily, and expects that some of that will only come through uncompensated reductions.

“Unless all the scientists are wrong, the river’s not gong to flow at the volume it used to,” Buschatzke said. “We need long term reductions in demand.”