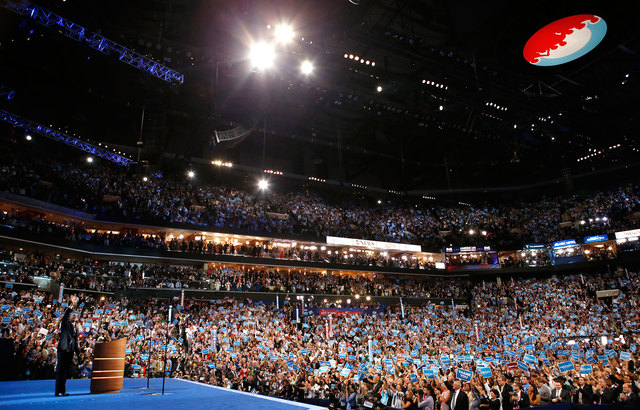 WASHINGTON — Except for the homegrown variety and a few coming through Las Vegas to raise money, politicians will be rare during summer 2016.

The city is poised to turn down an invitation to bid for that year’s Democratic National Convention, the Review-Journal has learned. The deadline is today.

Although there has been no official announcement, Democrats concluded the same as Nevada Republicans, who withdrew a bid for their party’s 2016 convention last month in part after finding the Las Vegas Convention Center could not be made available for the stretch of weeks that would be required to convert it to a suitable site.

“I think it was determined that, as what went on with the Republicans, it is not an easy undertaking,” said Sen. Harry Reid, D-Nev. He added the cost of hosting the political convention was going to be more than originally expected after Congress in March ended an $18 million taxpayer subsidy for each convention.

“The laws have been changed here,” Reid said. “It takes more money than it did last time. And that’s where we are.”

It once appeared Las Vegas would have two chances to become the center of the U.S. political universe during the summer of a presidential election year. Now all it will have is the heat.

The Democratic National Committee in February sent initial letters to dozens of cities, pointing out that hosting a convention could inject $150 million to $200 million directly into a local economy. In April the party invited 15 cities to submit bids, including Las Vegas.

A committee spokeswoman said Las Vegas was sent formal specifications for the event, which probably would be late that summer.

Beyond an initial letter of interest from Las Vegas Mayor Carolyn Goodman to Democratic National Chairwoman Debbie Wasserman-Schultz, city officials could find no records to indicate the Democrats’ invitation was considered at the same time the city, and the Southern Nevada business community got behind a full-blown campaign to lure the Republican convention.

“It is safe to say no bid is forthcoming unless there is another group out there doing it that is not the city or the LVCVA,” city spokesman Jace Radke said.

According to the Democrats’ formal bid invitation, host cities were required to demonstrate a line of credit up to $20 million to cover possible shortfalls. Also, the chosen city would be required to make its convention site available for eight weeks before the event.

Miami dropped out of the running last week, with the Miami Herald reporting the convention could have cost the city $50 million. Orlando, Fla., has withdrawn.