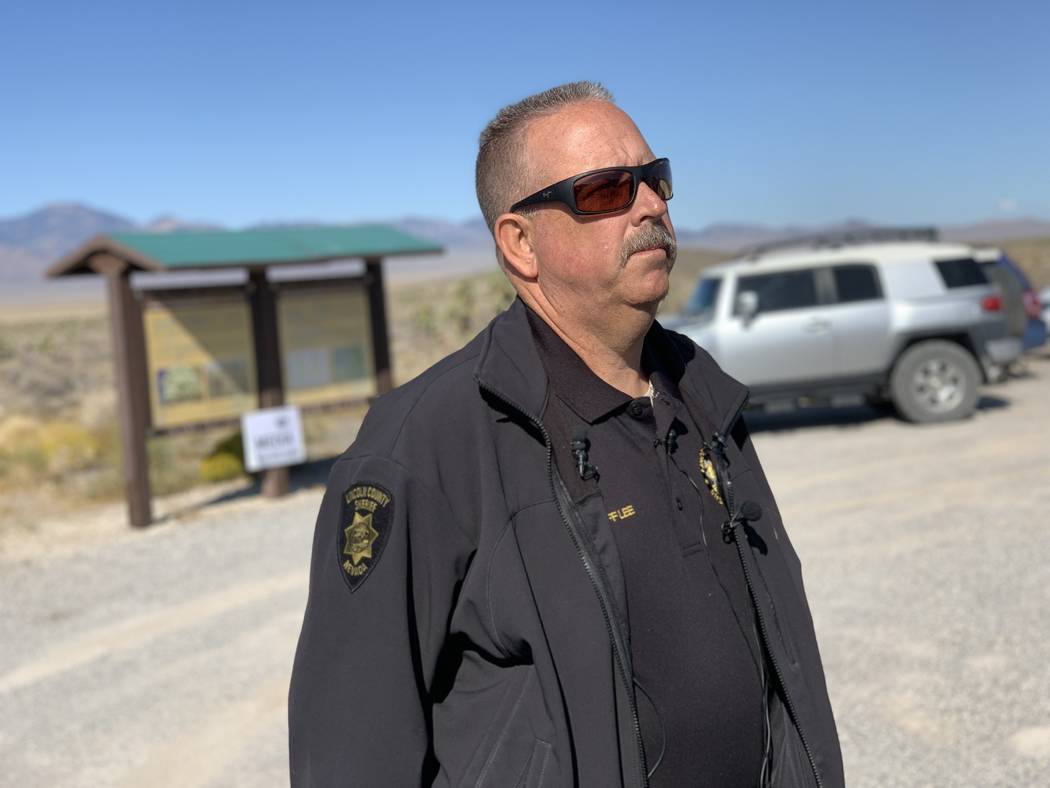 RACHEL — The first two days of Storm Area 51 events has yielded only a handful of arrests, including one for a man urinating on an Area 51 security gate.

A Canadian resident was arrested by the Lincoln County Sheriff’s Department on a charge of indecent exposure for relieving himself on the gate, despite about a dozen uniformed officers near the gate’s entrance.

Another woman threatened to cross the gate, resulting in her being detained for questioning, but later released.

Despite the two incidents, the crowd that gathered at the gate early Friday morning made light of the situation, chanting and taking pictures, according to Lincoln County Sheriff Kerry Lee.

“They did threaten that they were going to storm, once officers warned them of the consequences they would face, they did have second thoughts,” Lee said.

Breaching the gates would result in a misdemeanor trespassing charge that comes with a $1,000 fine and up to 30 days in county jail, Lee said.

The gathering grew out of a Facebook post in June encouraging people to storm Area 51, the secretive Air Force base located inside the Nevada Test and Training Range that has long been rumored to house extraterrestrial technology.

Besides the two people detained at the Area 51 gate, Lee said the sheriff’s department also arrested someone not at the gate for having an open container in their vehicle and for warrants.

The Nevada Highway Patrol also made a pair of arrests, Lee said.

Thus far the events also have been relatively safe with no major medical incidents occurring.

“We’ve had a couple of minor medicals and a few accidents. We just had a tone out (a radio call) for a vehicle rollover (on U.S. Highway 93) north of Alamo,” Lee said. “With all the traffic this is very unusual for our area.”

Connie West, owner of the Little Al’Le’Inn in Rachel and Alienstock organizer, said that everything has been smooth besides someone being kicked out of the bar for a minor disturbance, causing a swarm of law enforcement to converge on the establishment.

“You don’t see any fights, no one is getting belligerent drunk,” West said. “It’s a fun time.”

As of midday Friday, about 2,000 people had descended on the area. Lee expects the number of attendees to jump to between 5,000-6,000 people between the two events, which he said is still manageable for the 300 first responders in place throughout the county.

“I think for emergency services that’s good,” he said. “Officers have been mingling with the crowds and the crowds have been positive.”