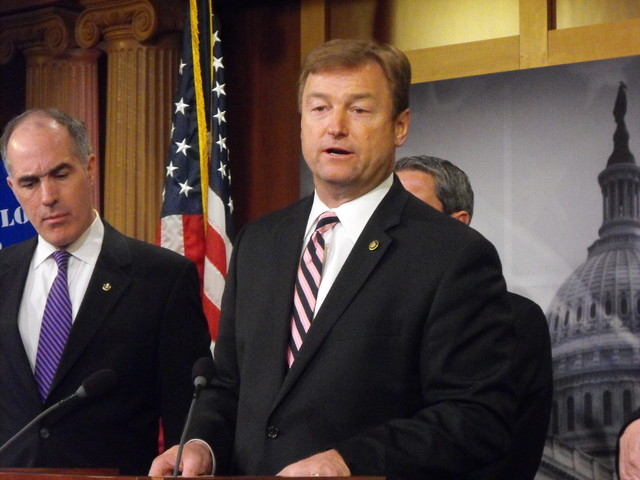 Heller and his wife, Lynne, paid $860,000 for the property that came with a three-bedroom home, according to Lyon County records. The parcels are next to 37 acres and a home the couple bought in 2011 in the valley southeast of Carson City.

In documents filed in the U.S. Senate, Heller said he collected between $15,000 and $50,000 income on the new property, which a spokeswoman said is from renting out the house. Heller also gained $14,892 last year from the sale of hay on the combined parcels.

Heller now has 121.2 acres in alfalfa production, not uncommon in the valley. Income generated by the property supplements his $174,000 salary as a U.S. senator and other family investments.

Details on Heller’s finances are contained in finance reports that members of Congress are required to file each May 15. They outline what properties they own and investments they have made, how much income is generated through them, and how much they owe and to whom.

Senators’ reports were released Thursday, while House filings will become public next month. Rep. Mark Amodei, R-Nev., provided his upon request. Rep. Dina Titus, D-Nev., said she was filing for an extension. Reports for Rep. Steven Horsford, D-Nev., and Joe Heck, R-Nev., were not available.

Lawmakers can report their holdings and debts in broad categories that provide a general sense of their financial health.

Sen. Harry Reid, D-Nev., reported his worth between $2.9 million and $6.77 million, a slight increase from last year’s report of between $2.8 million and $6.2 million that put him roughly in the top third of senators measured by wealth.

Reid’s most valuable investments are in land and potential minerals in and near Southern Nevada, including 160 acres in Bullhead City, Ariz., and majority interest on 55.1 acres and mineral rights beneath the land in Searchlight. Each was valued at between $250,000 and $500,000.

Reid and his wife, Landra, also are invested in municipal securities valued at between $1.4 million and $3.1 million. The couple’s liquid assets are managed through a blind trust.

Reid’s only listed liability is a Wells Fargo low-interest credit line that he took out two years ago to pay off the mortgage on his home in Searchlight. He owes between $100,000 and $250,000 on the line of credit.

Heller’s real estate purchases place his assets at between $1 million and $5 million, although they are secured by $1 million or more in mortgages, according to his filing.

Heller, 54, and his wife also gained between $73,500 and $179,500 last year from Lynne Heller’s shares in a family partnership and a family trust that is invested in California government bonds. Heller, former Nevada secretary of state, also retains a state pension worth between $50,000 and $100,000.