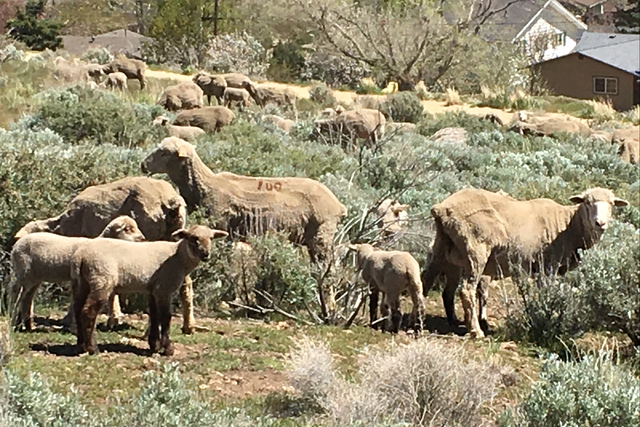 Ewes and lambs return to the west side of Carson City this month as part of an annual fire suppression effort. These ovines were grazing on Wednesday, April 13, 2016. Sean Whaley/Las Vegas Review-Journal 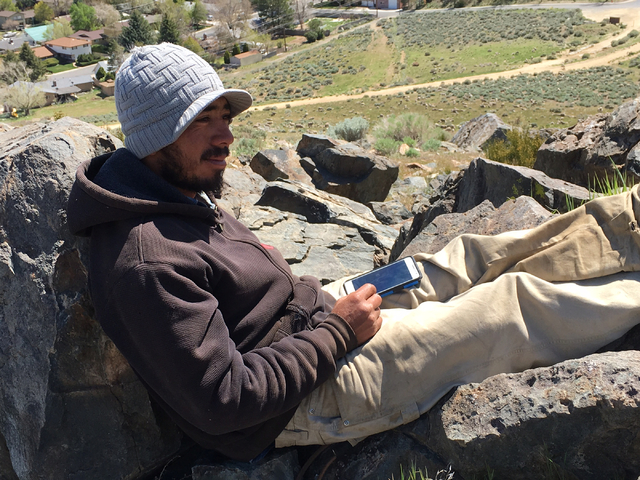 Sheepherder Ricardo Isidro Ruiz of Guadalajara, Mexico, relaxes while his flock takes a breather on the west side of Carson City on Wednesday, April 13, 2016. Sean Whaley/Las Vegas Review-Journal

CARSON CITY — In what has become an annual rite of spring in the capital, the bleating sounds of nearly 2,000 sheep are filling the air along the now-green hills on the west side of town.

About 800 ewes with 1,100 lambs are helping the city with its fire suppression efforts again this year, and with a healthy dose of rain and snow over the just-ended winter, the animals are a welcome sight.

“We anticipate they will be out close to six weeks this year,” said Rich Wilkinson, the senior natural resources specialist with Carson City’s Parks, Recreation and Open Space Department. “There are a lot more grasses than we anticipated. This is the green way to do it when you think about it.”

The Borda Land & Sheep Co. in Gardnerville provides the ovines along with two sheepherders and their dogs, border collies to herd the animals and Pyrenees to protect them from coyotes or other predators.

Wilkinson said the arrangement is mutually beneficial and while there are staff costs to the city, there is no out-of-pocket financial cost. The Carson City Fire Department delivers water to the animals, and the city monitors the vegetation before and after the sheep leave to ensure it is not overgrazed, he said.

“The Borda company gets four to six weeks of feed, and we get a nice fuel reduction,” Wilkinson said.

The program is a partnership with several groups, including the U.S. Forest Service, which manages lands higher up in the Kings Canyon and Ash Canyon areas west of town.

The sheep have been used for fire suppression for more than a decade. A second benefit is the consumption of non-native vegetation, including cheat grass. The sheep will eat the cheat grass, which is a fire hazard, only for the brief window of time that it is green, Wilkinson said.

The city looked at other options, including herbicides to control the non-native species, but the terrain and widespread presence of the weeds makes the sheep a much better option, he said.

Anna Belle Monti, a fuels forester for the U.S. Forest Service, said the annual project works great for the agency and Carson City since the Bordas have grazing rights farther up the mountain on agency land.

“So when we can work it out, it’s a great cooperative project,” she said.

There are test areas on C Hill that are fenced off so the effectiveness of the project can be measured, Monti said.

“We have several years of data that show that the amount of cheat grass has decreased significantly since the project began,” she said.

On a recent spring day the ewes and lambs were below C Hill, so-named because of the large “C” made out of whitewashed rock that looks over the capital.

Sheepherder Ricardo Isidro Ruiz, of Guadalajara, was relaxing in the sun with his smartphone while the animals took a break from their grazing. While the conversation was limited due to language differences, Ruiz indicated that coyotes are the main concern for his flock, especially the lambs.

The sheep grazing program is intended in part to create a firebreak between the wildlands and homes on the west side of town and to reduce the intensity of a fire if one does start.

Anyone who witnessed the disastrous Waterfall Fire west of Carson in 2004 knows firsthand how fast a wildfire can spread and threaten homes. Started by an untended campfire, it burned 8,000 acres and destroyed 18 homes before it was finally put out.