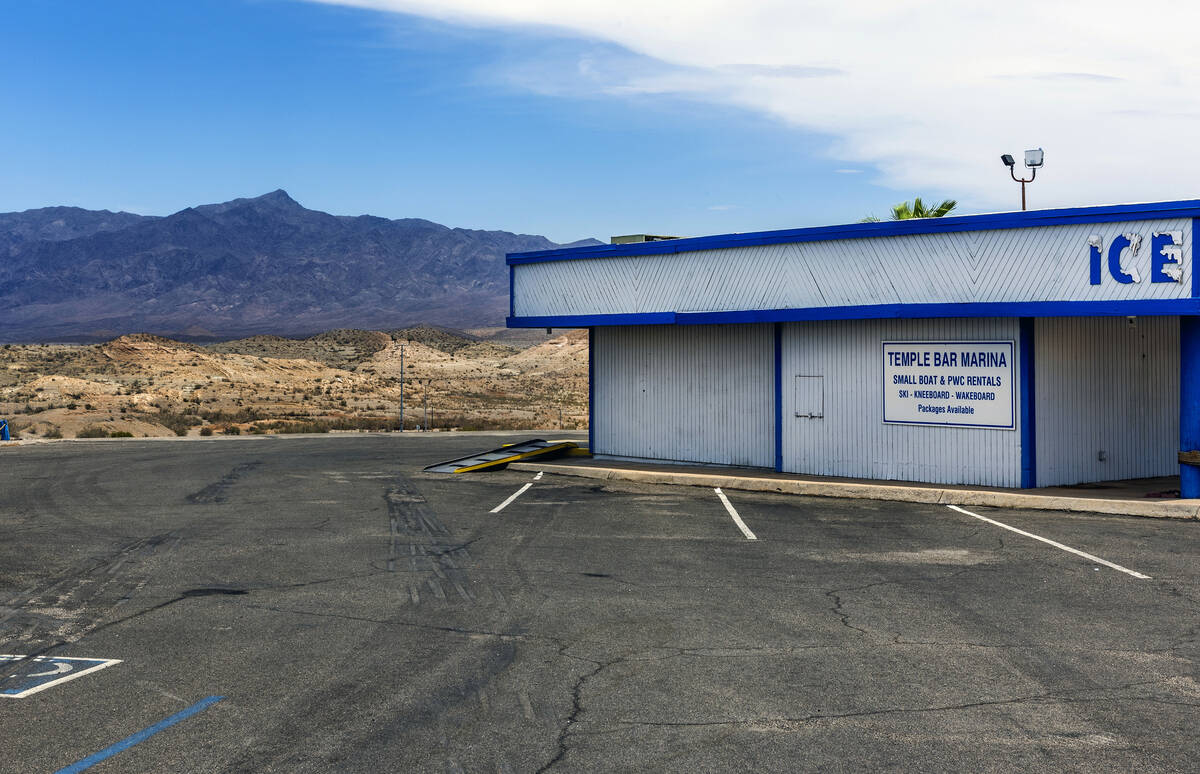 The old ice building where the waterline once was about the Temple Bar Boat Harbor at the Lake Mead National Recreation Area, the marina is regularly pushed further out on Wednesday, July 20, 2022, in outside Boulder City. (L.E. Baskow/Las Vegas Review-Journal) @Left_Eye_Images 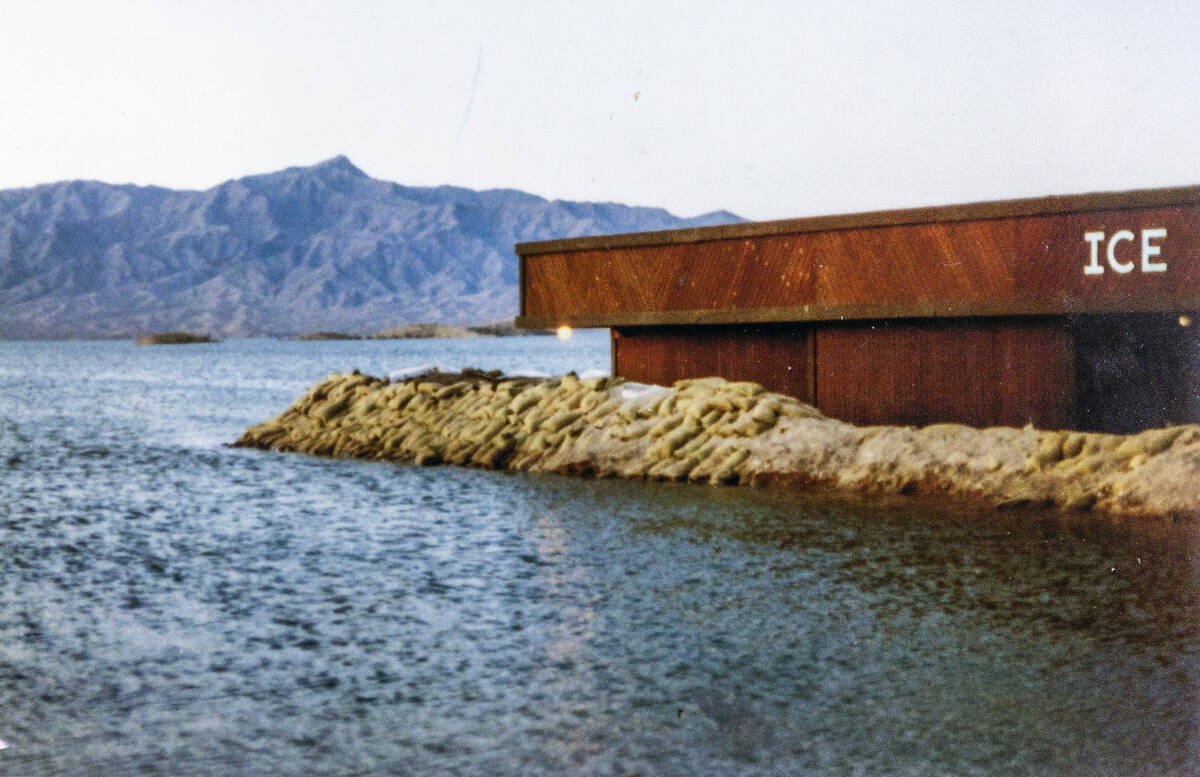 The original extended boat ramp and walkway at Callville Bay is no longer in use with a new lot and ramp closer to the marina as the waterline continues to recede at the Lake Mead National Recreation Area on Wednesday, July 20, 2022, outside Boulder City. The red-roofed building in the background used to be right by the waterfront. (L.E. Baskow/Las Vegas Review-Journal) @Left_Eye_Images 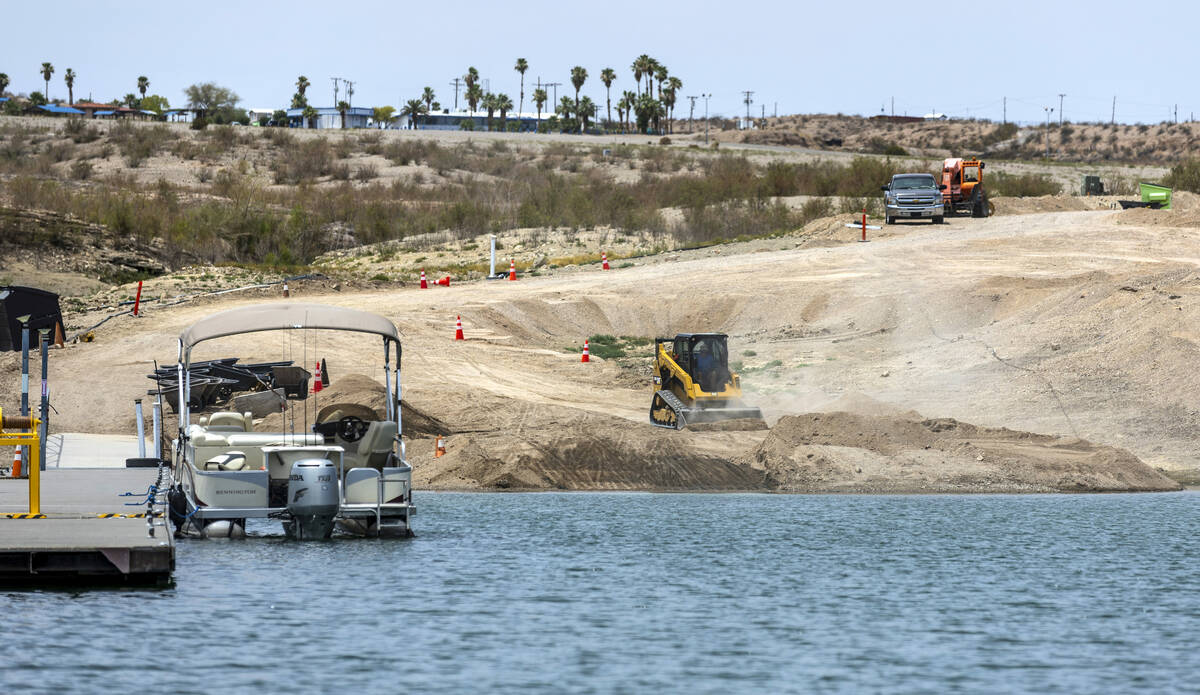 The shoreline is filled in as the marina in pushed back again in the Temple Bar Boat Harbor at the Lake Mead National Recreation Area as the waterline continues to recede on Wednesday, July 20, 2022, in outside Boulder City. (L.E. Baskow/Las Vegas Review-Journal) @Left_Eye_Images 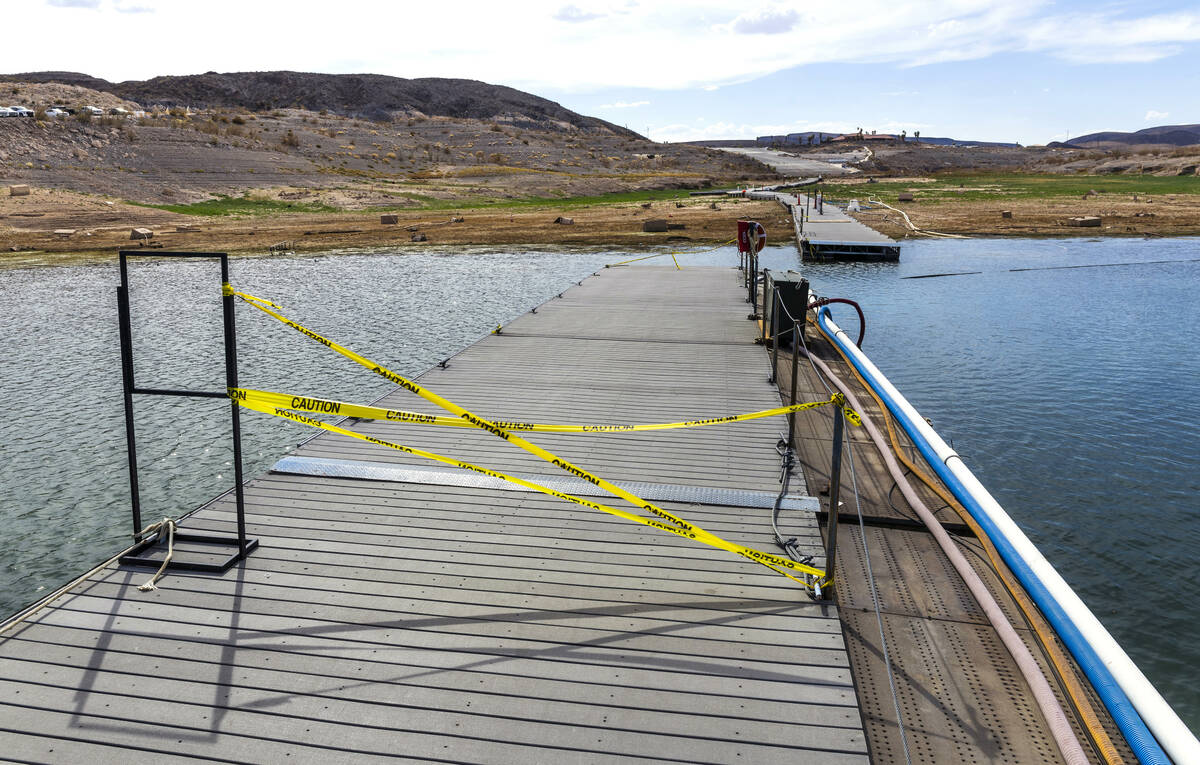 The original former walkway at Callville Bay is no longer in use with a new lot and ramp closer to the marina as the waterline continues to recede at the Lake Mead National Recreation Area on Wednesday, July 20, 2022, in outside Boulder City. (L.E. Baskow/Las Vegas Review-Journal) @Left_Eye_Images 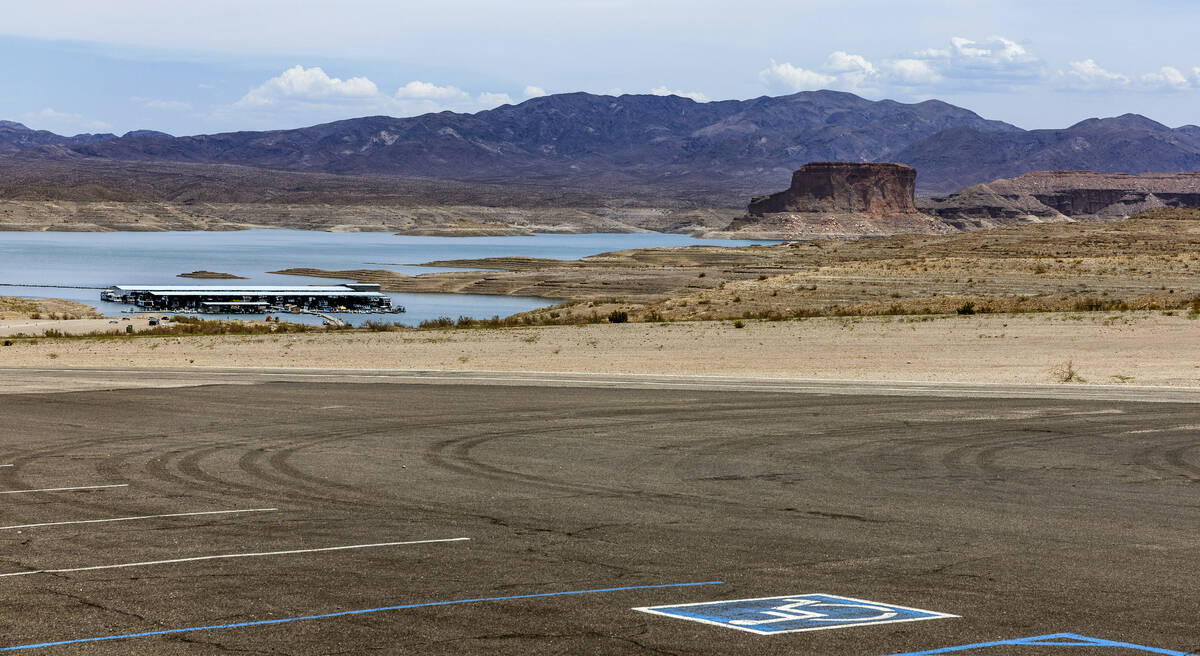 The waterline continues about the Temple Bar Boat Harbor at the Lake Mead National Recreation Area as the marina is regularly pushed further out on Wednesday, July 20, 2022, in outside Boulder City. (L.E. Baskow/Las Vegas Review-Journal) @Left_Eye_Images

Behind the store counter at the Temple Bar Marina at Lake Mead lies a photo from the 1980s, revealing that the building was once waterfront property.

“They told me that you could basically throw a rock from your hotel room and hit the water,” says Nathan Newingham, operations manager at the marina.

Now, the building sits on a hill so far removed from the shoreline that a van shuttles people back and forth from the marina to the store when they dock their boats.

“You saw that parking lot as you were coming up? That wasn’t a parking lot three months ago,” Newingham says. He gestures to sandy islands, explaining that they were underwater until only a few months ago.

For the past few decades, water levels at Lake Mead have steadily declined as much of the western United States contends with the overallocation of the Colorado River and a multidecade “megadrought.” And within the last few years, those drops have been especially precipitous as water managers have made unprecedented decisions to try to manage the water crisis facing the Colorado River Basin.

And projections from the Bureau of Reclamation indicate the decline will continue. By September 2023, the elevation of Lake Mead could be under 1,010 feet, 31 feet lower than it is now.

These declines have serious repercussions for marina owners, who have had to push their marinas further out into the lake to keep their businesses afloat.

Newingham says that since he started working at the marina in mid-January of this year, they’ve had to move the marina out by 1,200 feet — about 100 feet at a time — to track the rapid decline of Lake Mead.

“Every time you go [further] out, it’s a little bit harder,” Newingham says.

Moving a marina is no simple feat, explains Kim Roundtree, general manager of Callville Bay Marina. Callville Bay is on the other side of the Boulder Canyon from Temple Bar, but the two marinas are sister properties.

Each time workers move the marina at Callville Bay, 170 anchors weighing 12,000 pounds each have to be moved with it. And with each move, workers also have to extend electric, water, sewer and fuel lines that provide utilities to the marina. Roundtree says it takes a crew of about 20 people to make each move.

And since January, Roundtree says those moves have been happening almost every week at Callville Bay in 60-foot increments. At this point, workers are constantly either moving or preparing to move the marina.

“It’s been just go, go, go, go,” she says. “We’ve put a lot of our normal stuff on hold just to be able to get all hands on deck and get that marina out.”

She estimates the marina has had to move over 1,000 feet in the past year and she expects to continue moving in the coming months.

“We’re bound and determined to make this work,” Roundtree says. “So that we can still keep our marina going.”

At one point, the National Park Service maintained boat launch ramps at six locations around the lake. But currently, only the boat launch at Hemenway Harbor remains open, and the park service has worked diligently to continue extending that ramp to maintain boating access.

The park service estimates it costs between $2 million and $3 million to maintain boating access to Lake Mead for every 4-foot decrease in lake elevation. Since 2010, the park has spent over $40 million to ensure continued access.

At Callville Bay, the original boat launch has been out of commission for years; the last time Roundtree remembers it being used was in 2011.

A second “low-water” boat launch opened in 2010 at Callville Bay, but it closed on March 24 when the water levels dropped below 1,062 feet. With permission from the park service, Roundtree has repurposed part of the boat launch into a parking lot.

The boat launch ramp at Temple Bar has been closed since July of last year when water levels reached 1,067 feet.

A spokesperson for Lake Mead said in an email that the recreation area’s staff continues to speak with community members and elected officials about the rapidly declining water line and launch ramp accessibility challenges.

The park service released a low-water plan to potentially extend launch ramps and marina operations at places like Callville Bay and Temple Bar to 950 feet, which could cost up to $32 million and may require relocating those structures to more suitable locations on the lake.

In the meantime, Newingham and Roundtree agree that the boat ramp closures at Callville Bay and Temple Bar have deterred many people from visiting.

Roundtree says boat rentals, the general store, and food and beverage have suffered the biggest losses in revenue because casual, weekend boaters have stopped visiting in the numbers they used to.

“Since [the main boat launch] has been closed, people have thought, ‘Well, the whole thing’s closed,’” Newingham says.

But Roundtree assures that there are still plenty of opportunities to recreate on the lake. “Does it look like what it looked like 20 years ago? No. But is there still a whole lot of water to go boating? Absolutely.”

At maximum capacity, Lake Mead is the largest reservoir in the United States by volume. Even now, at less than 27 percent of max capacity, once people leave the shallow inlets along the shoreline, there are many places where the water is still several hundred feet deep.

“We just need people to know that we’re still open,” Newingham laughs. Temple Bar Marina will be celebrating its 75th anniversary this August. He says that even though the boat launch is closed, the marina has plenty of rental boats available, and he encourages kayakers and others wanting to escape from the rush of city life to visit.

“The sunrises are amazing,” he says. “It comes right over the Temple.”

As water managers contemplate additional cuts on the Colorado River, marina owners will continue to move at the mercy of Lake Mead’s falling water levels. “I’m not throwing in the towel,” Roundtree says.

In the coming months, Callville Bay is planning a “long move” of two to three hundred feet at one time.

And Newingham says that at Temple Bar, he expects he’ll have to move the marina another six to eight hundred feet out into the lake by the end of 2023.

Both marinas hope that by moving out far enough into the lake, they’ll reach a point of deeper, more stable water, where they’ll still be able to operate even if lake levels continue to decline.

“Once we get through this hard part, we’ll be in pretty good shape,” Newingham says. “Right now, it’s just about trying to get through 2023.”

Newingham says there’s been talk of eventually making the marina at Temple Bar self-sustaining so that it no longer relies on utility lines running from land. He even says they’ve considered constructing new buildings closer to the current shoreline in anticipation that Lake Mead might never fill up again.

And over at Callville Bay, Roundtree says that even though the last few years have been a challenge, none of the marinas in Lake Mead are giving up.

“I have a goal to keep going,” Roundtree says. “Unless the park service stops me, I’m continuing on.”