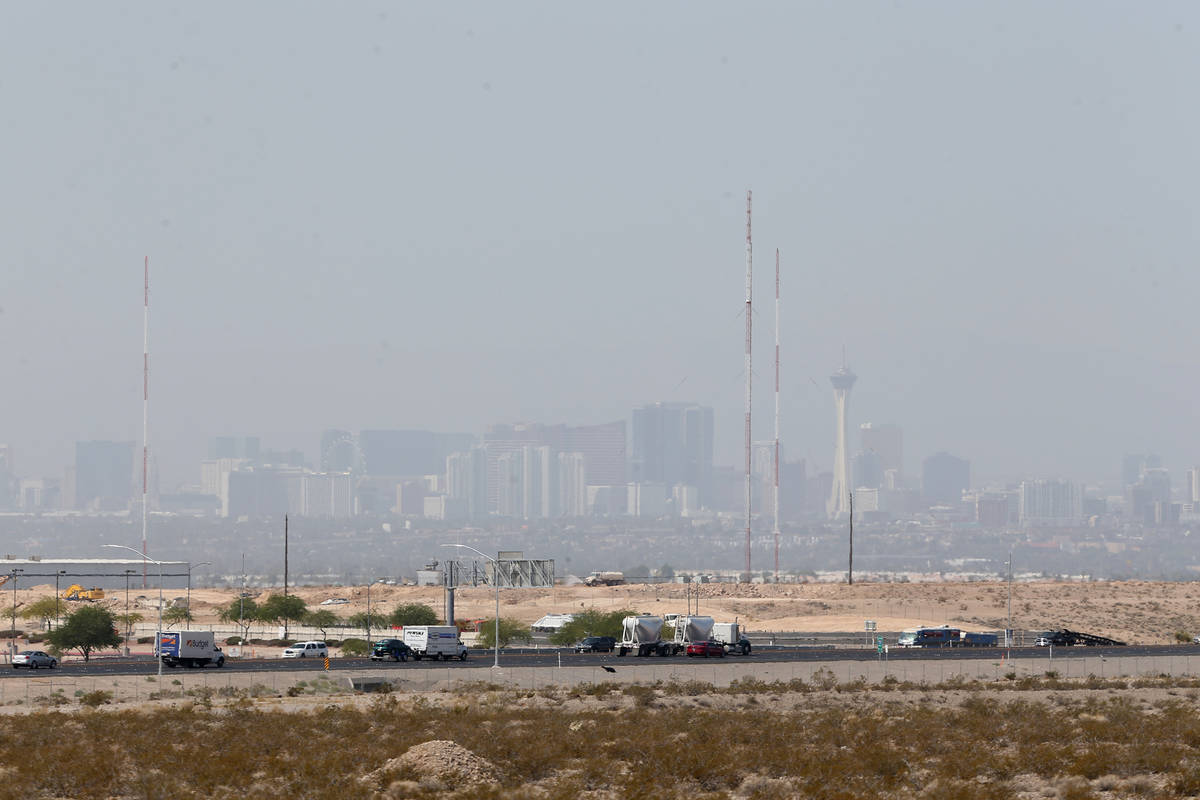 Clark County has seen more days with high ozone pollution this year than in 2019 despite the economic impact and lifestyle changes prompted by the COVID-19 outbreak, according to a new report by the county.

In the first half of 2020, Clark County reported five days when ozone levels exceeded the Environmental Protection Agency’s health standard of 70 parts per billion, compared with two days during the same period in 2019, according to the report released Wednesday by the Clark County Department of Environment and Sustainability’s Division of Air Quality.

Ozone exists naturally in the upper atmosphere, but when it’s produced in the lower atmosphere it can cause serious respiratory issues in humans.

With fewer cars on the road due to the COVID-19 pandemic, an increase in ozone pollution may come as a surprise. Traffic in the Las Vegas area has been down during the pandemic, and Clark County reported an improvement in air quality in April.

The American Lung Association also noted improved air quality across the country in the first weeks of the pandemic, according to JoAnna Strother, director of advocacy for the association in Nevada.

“Unfortunately it really was only a temporary pause,” Strother said. “There are big spikes again in pollution.”

Still, she said, the initial decline was a promising sign that setting stricter vehicle emission standards would dramatically improve air quality across the country.

According to data provided by the Nevada Department of Transportation, traffic on Interstate 15 was down on average about 50 percent in April versus about 10 percent in June, compared to the same months in 2019.

Clark County’s reported sources of ozone on the days that pollution was highest this year were transportation via wind from Southern California, ozone created in and transported throughout the county, and one day where low airflow allowed ozone to accumulate in the low atmosphere. The results are preliminary and have not yet been verified by the county air quality office.

“The geography, topography, and climate all really come together to make this region a perfect oven to cook ozone,” he said. “Pollutants can float in here and settle in like a bowl … if we don’t have the winds to clear it out.”

The unusually low ozone pollution in 2019 was likely due to the fact that few wildfires occurred that year in Southern California or Southern Nevada, MacDonald said.

Ozone levels spike in years with many wildfires and weather patterns that send wind into Nevada from California. Wildfires in 2018 caused major ozone pollution in Nevada, with 15 days exceeding the standard by July 1. The previous three years had eight ozone-heavy days in the same time period. Overall, ozone pollution is on a downward trend over the past 15 years, according to county data.

The recent Mahogany Fire on Mount Charleston did not burn on days with winds blowing in the city’s direction and did not contribute to 2020’s high ozone days.

In the past several years, air quality has been a point of contention between the county and the American Lung Association, which has repeatedly cited Las Vegas as being among the most polluted cities in the United States for ozone. The county maintains that air quality in the county is well within EPA standards.

Strother emphasized that the ALA’s annual State of the Air report is not an indictment of any city’s or county’s efforts in reducing air pollution, but an educational document meant to inform the public on the dangers of ozone pollution.

“Our report is really an education piece for people to understand that sometimes you can’t see air pollution, but it’s still damaging to your health,” Strother said. Both Strother and MacDonald stressed the importance of heeding air quality warnings and limiting time outside on days when ozone levels are high.

Ozone, an odorless gas, is the primary component in smog. Unlike other pollutants like carbon dioxide, ozone isn’t released into the atmosphere directly. It is instead formed when certain chemicals react with sunlight. These chemicals, nitrogen oxides and volatile organic compounds, are emitted by common polluters such as vehicles, power plants and wildfires.

Risk of ozone pollution is highest on sunny days with little airflow when emitted nitrogen oxides and VOCs react with light to produce ozone. Ozone can also be transported into populated areas by wind.

Wednesday’s report detailed some of the ways the state and the county have been reducing emissions that contribute to ozone pollution, including using hybrid vehicles and endorsing Gov. Steve Sisolak’s Clean Cars Nevada initiative. The ALA also supports the initiative and encourages local governments to invest in renewable energy such as solar power.