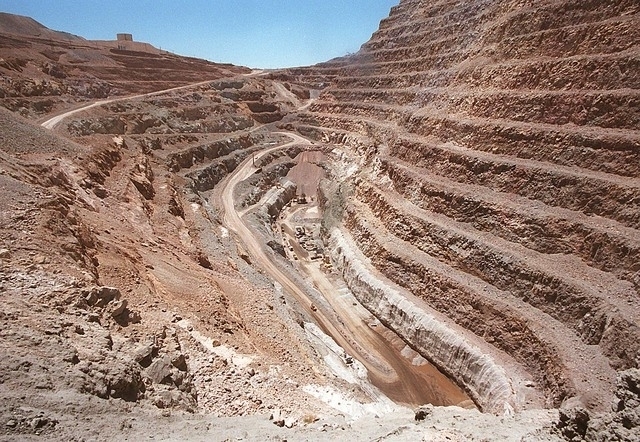 Lower gold prices, production declines and higher costs to mine the ore are contributing to lower revenue from the mining tax. (Las Vegas Review-Journal file)

CARSON CITY — Nevada’s general fund is taking a hit this year of more than $70 million because of changes in the gold mining industry, but the effect on the counties that rely on the net proceeds of minerals will be tougher to absorb.

Lower gold prices, production declines and higher costs to mine the ore are contributing to lower revenue from the mining tax.

The revenue estimate to the general fund from the net proceeds of minerals was $93 million but totaled only about $20 million this fiscal year.

The state Economic Forum, a five-member panel of financial experts charged with the task of projecting tax revenue every two years, was briefed on the issue Tuesday.

The panel later this year will make the revenue estimates that will be used by the governor and Legislature to balance the next state budget.

The panel was told by Terry Rubald, deputy executive director of the state Taxation Department, that actual gold production declined slightly in 2013 over 2012 after modest growth over the prior three years.

But it isn’t only the state budget that faces dramatic reductions in the revenue source.

Nevada counties that rely on the revenue will see significant declines as well, according to revised projections from the Taxation Department.

The state is expected to be able to absorb the loss from the revenue without much difficulty. The net proceeds tax was estimated to bring in $196.8 million in the current two-year budget, about 3 percent of the total $6.4 billion in revenue.

But the hit on Nevada’s rural counties might be tougher to absorb.

The new projections show that instead of receiving nearly $100 million from mining taxes this year, the counties will bring in $26.2 million.

Jeff Fontaine, executive director of the Nevada Association of Counties, said the revised projections are a big deal for some counties because they have increasingly relied on the revenue source to balance operating budgets.

The revenue had been used primarily for capital and one-time expenditures, but the Great Recession, combined with increasing unfunded mandates from the state, have led to greater reliance on the mining taxes to run day-to-day operations, he said.

The counties were notified of the downward revisions April 30, after tentative budgets had been adopted for the upcoming 2014-15 fiscal year, which starts July 1, Fontaine said.

The downward revision is made worse because the taxes have been paid upfront based on the projections that are now known to be excessively optimistic, he said.

“For those counties that rely on net proceeds, this is a big deal,” Fontaine said.

Eureka County Auditor/Recorder Michael Rebaleati said the county was projected to receive about $12 million from the tax but ended up with about $2.5 million this year.

Because the county has used the revenue for capital projects and one-time purchases such as new vehicles, the county’s $11.6 million operating budget is not affected, he said. But there won’t be any capital projects for the foreseeable future, Rebaleati said.

Even so, the operating budget has been cut because other revenue, such as sales taxes derived primarily from mining company purchases, are lower too, he said.

What really needs to be changed is the way the tax is levied, he said.

Mining taxes are now paid in advance and when the projections are not met, counties are hit with lower revenue after the fact, Rebaleati said.