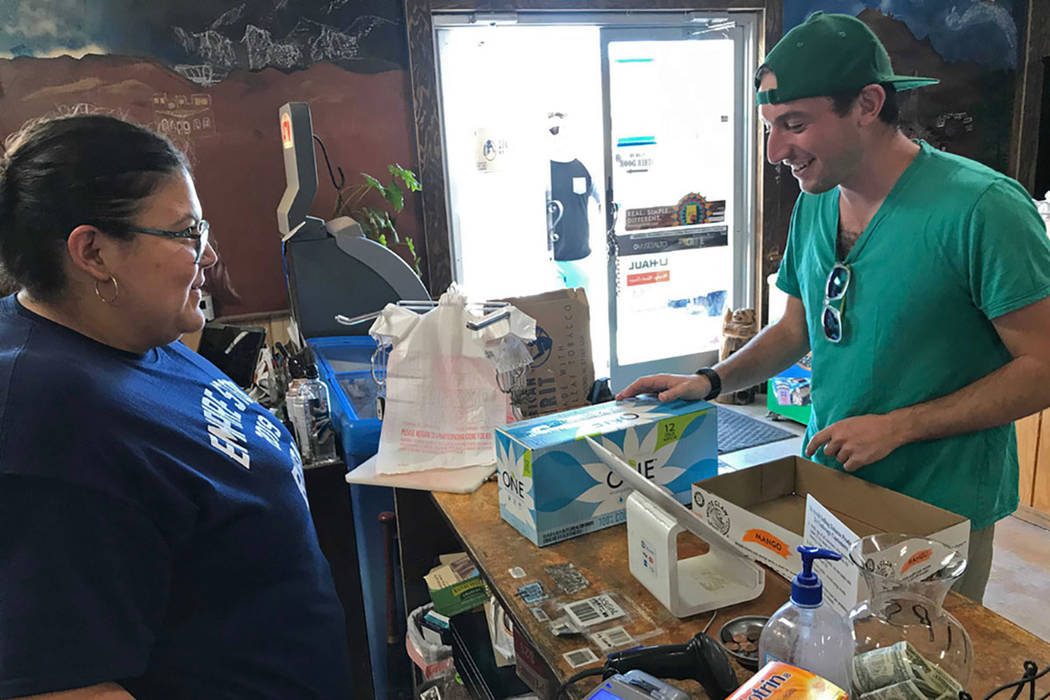 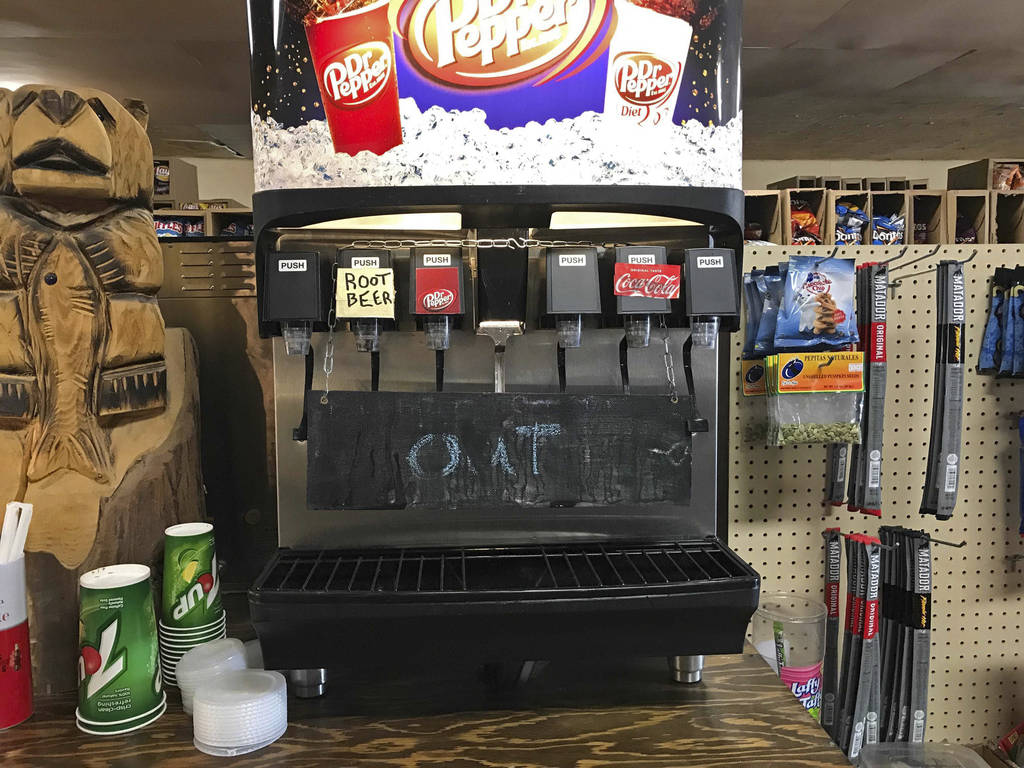 Because of high demand, syrups that flavor the sodas at the Empire Store ran out and forced owner Dana Sparkes to disengage his soda machine in Empire, Nev., on Aug. 25, 2019. (Jenny Kane/Reno Gazette-Journal via AP) 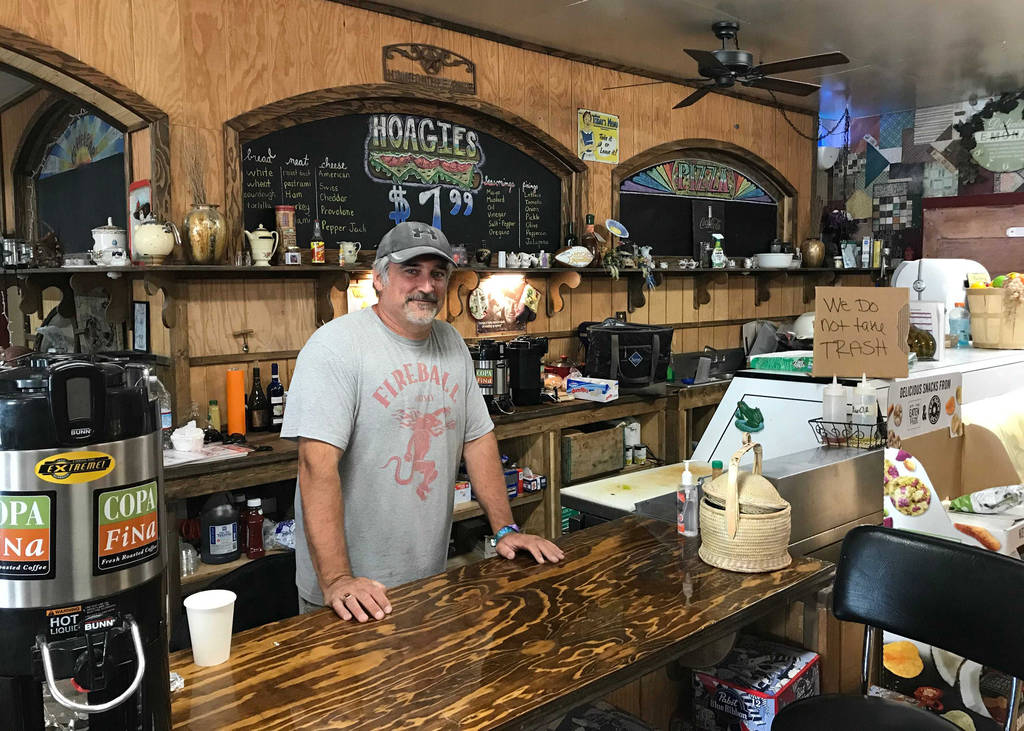 EMPIRE — Coconut water is sold out at the Empire Store, Dana Sparkes is pretty sure.

It’s not usually something that flies off the shelves at the only general store in Empire, the 60-person gypsum mining town on the edge of Northern Nevada’s Black Rock Desert about 90 miles north of Reno. Then again, a lot of the inventory this week is special.

“The Burners, they like a lot of stuff that I don’t carry 11 months out of the year,” Sparkes, the store owner said last weekend.

Sparkes, a former special education teacher, has owned the 5,000-square-foot grocery and deli since “following a girl” to Gerlach, the town five miles north of Empire, in 2010. He bought the shop knowing next to nothing about running a mart in the middle of nowhere.

The Empire Store, with aisles of booze, a quaint deli and a wide assortment of snack foods, is the last chance for a lot of items before Burning Man attendees head out to the desert.

Most days of the year, the establishment feels like an Old West holdout. It has faux silhouettes painted in the faux windows of the wooden facade.

During Burning Man, which runs through Labor Day, the other faux items at the store are the fur coats in front, on display with gold lamé bra-lets and tie-dye cat suits.

“I’ve often thought about closing this time of year, I’m always trying to meet the needs of the Burners. They ask, ‘Do you have X, Y, Z? I say, ‘I’m sorry I didn’t think about X, Y, Z,” he said, shaking his head.

This year kombucha, coconut water and — as always — potato chips are popular. He credits about one-third of his annual business sales to Burners this time of year.

He sells 7,200 cans of Pabst Blue Ribbon and 4,500 bags of ice. For a period, he said the store also becomes the third-largest distributor of American Spirit, an organic tobacco cigarette.

In a typical month, he sells 1,000 gallons of gasoline. During the three-week period surrounding Burning Man, he sells 50,000.

“Dana is all over the place. He’s running around like a chicken with his head cut off,” said Dick Hurstak, commander of the Veterans of Foreign Wars in Fallon. “He’s trying to run trailers to the playa, he’s trying to run the store, he’s running to Reno to restock the ice and groceries.”

For the past five years, Hurstak has brought nearly a dozen veterans, including himself, to volunteer to pump gas for Burners. In return, they make tips — all of which the volunteers donate to needy veterans and their families. Sparkes also donates $4,000 after the event to the VFW for those veterans and families.

Last Sunday, the first official day of the Burning Man event, the lone pump was “working her pretty little heart out,” Sparkes said, noting that the other pump had a broken hose. A line of RVs formed to be topped off.

Most Burners — Sparkes attends too, usually one night each year — are extremely grateful. He loves hearing all the different accents, English, Australian, German, Israeli, Italian and more.

Granted, Burners are most friendly when they’re on their way in, but not as friendly on the way out.

“Coming off the playa, if you don’t have coffee, or you don’t prepare it quickly enough . they’re starving, ravenous. They’ll chew your arm off after their own,” he said.

Mostly, though, they’re grateful for a last-minute lighter, a sandwich in the middle of a traffic jam, or a cold beverage.

“I’m just buying a baguette and a Gatorade because it’s hot” outside, said Jessie Blair of Vancouver, British Columbia.

Just around lunch, another Burner walked into the general store in search of . coconut water.

He and his friends stopped in Reno. Walmart was out. Target was out. Coconut water was sold out everywhere. They found a few cans at Safeway, but Jeremy Keeshin, a five-time Burner from Chicago, needed more.

Keeshin didn’t originally like coconut water, but then he gave it another chance at Burning Man a few years ago, he said.

There was one last 12-pack of coconut water at, of all places, the Empire Store.

Keeshin seized the 12-pack, loaded into a van and headed out into the heat and Burning Man traffic, coconut water in hand.

— Jenny Kane is a reporter for the Reno Gazette Journal. This article was distributed through the AP Member Exchange program.