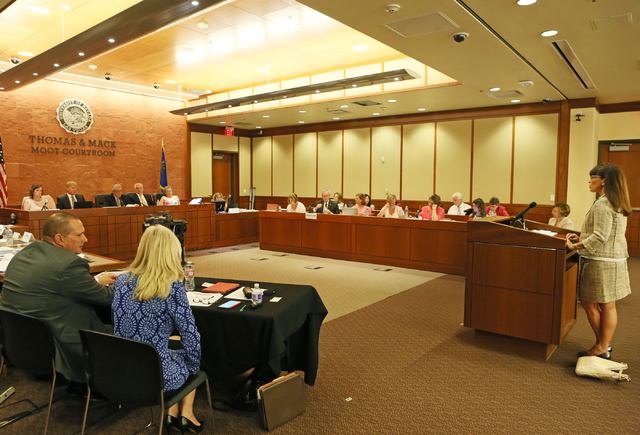 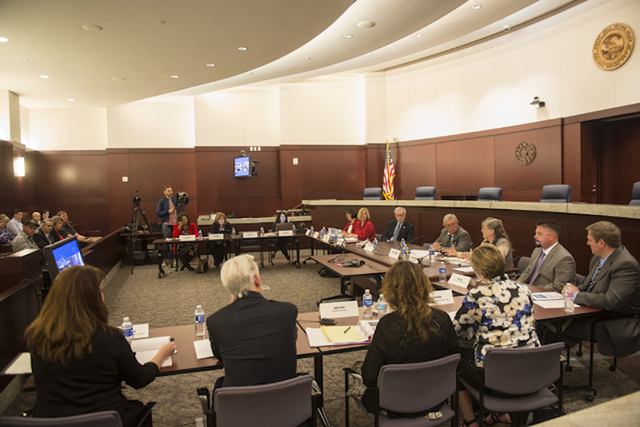 The Nevada Supreme Court panel to discuss how to fix the state's guardianship system meets at the Regional Justice Center in Las Vegas on Friday, April 1, 2016. (Jacob Kepler/Las Vegas Review-Journal) 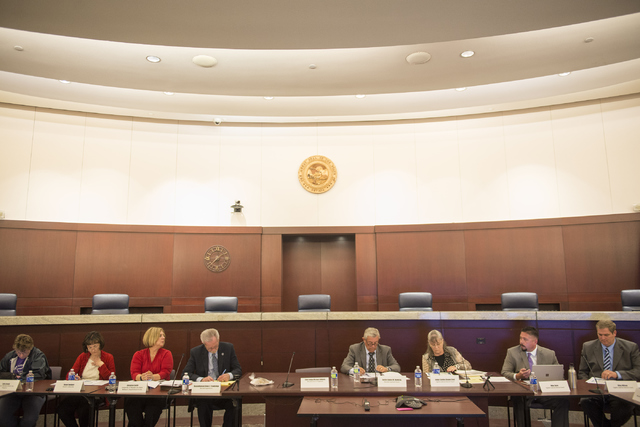 The Nevada Supreme court panel to discuss how to fix the state's guardianship system meets at the Regional Justice Center in Las Vegas on Friday, April 1, 2016. This was one of the final meetings in the reform process. (Jacob Kepler/Las Vegas Review-Journal)

A Nevada Supreme Court commission on Thursday called for sweeping reforms of the state’s guardianship system in hopes of better protecting the state’s growing elderly and infirm population.

The 236-page report comes as a culmination of 15 months’ worth of commission meetings dating back to June 2015 and includes dozens of recommendations for changes in guardianship law, policy and court rules.

The 27-member commission was formed after a Review-Journal series highlighting the flaws and lack of oversight of the guardianship system in Clark County that watches over thousands of at-risk adults, called wards, who suffer from mental or physical incapacities.

Most notably, the report calls for all people under guardianship to have the right to an attorney, which is not currently granted in Nevada.

“I think that was a fundamental thing that was missing and could have avoided so many of the problems seen in the courts,” commission member and Assemblyman Mike Sprinkle, D-Sparks, said Thursday.

The commission was originally slated to be in place for just six months. But after several meetings that included heated and emotional speeches by victims of exploitation and their families, the commission extended its length of operation to more than a year and met 15 times. After seeing how deep the issues ran in the system, members voted to make the commission permanent.

“Some of the cases were just horrible to read, and there’s no doubt that many of these recommendations, if enacted by the Legislature, will stop some of those abuses,” said Barbara Buckley, executive director of the Legal Aid Center of Southern Nevada, a nonprofit law firm that began handling guardianship cases earlier this year.

Buckley echoed Sprinkle’s thoughts that providing legal representation is the most impactful change recommended by the commission.

“Individuals in this situation are being stripped of their civil liberties, the right to run their life as they see fit, without anyone speaking to them or advocating on their behalf,” Buckley said.

Having an attorney from the outset of a case will prevent much of the abuse seen, including the loss of civil liberties and the financial exploitation seen in several cases, she added.

■ Providing independent investigators and accountants to help detect and prevent fraud and abuse in guardianship cases.

■ Reining in the fees charged by private guardians, who can charge upward of $250 per hour to wards, even for tasks such as making phone calls and sending emails.

■ Prohibiting guardians from selling a ward’s assets — such as their house or car — without prior court approval from a judge.

■ Implementing a guardianship Bill of Rights for wards.

In total, the report calls for 16 changes to state law and 14 statewide changes for guardianship court rules. The proposed law changes would need to be drafted into bills and approved by the Legislature in 2017.

For Buckley, the recommendations are a giant leap in helping those who can’t help themselves.

“It will put the focus back on where it should have always been: on the protection of the individual,” Buckley said.