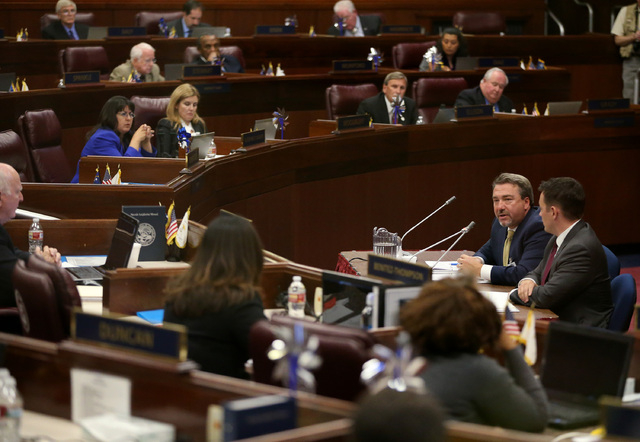 Tony Sanchez of NV Energy, left, and Paul Thomsen, with the Nevada Office of Energy, answer questions from lawmakers during a special session of the Nevada Legislature in Carson City on Wednesday, Sept. 10, 2014. Lawmakers are considering a complex package of up to $1.3 billion in tax breaks and other incentives as part of a deal to bring Tesla Motors to Nevada. (AP Photo/Cathleen Allison) 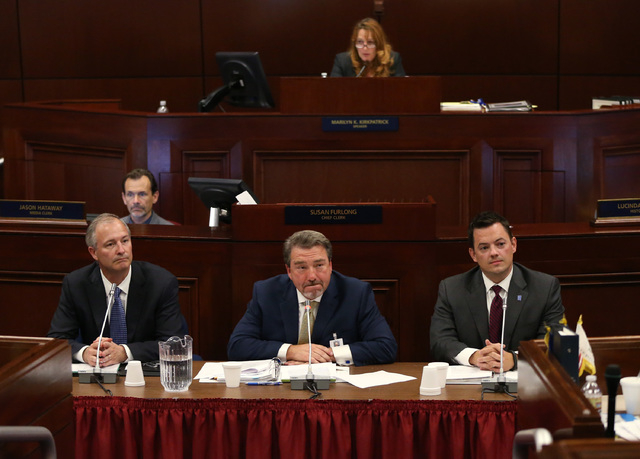 From left, Steve Hill with the Nevada Office of Economic Development, Tony Sanchez with NV Energy and Paul Thomsen with the Nevada Office of Energy, answer questions from lawmakers during a special session at the Nevada Legislature in Carson City on Wednesday, Sept. 10, 2014. Lawmakers are considering a complex package of up to $1.3 billion in tax breaks and other incentives as part of a deal to bring Tesla Motors to Nevada. (AP Photo/Cathleen Allison) 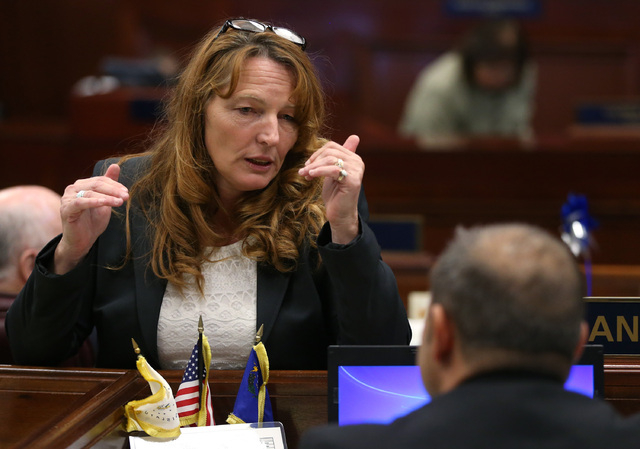 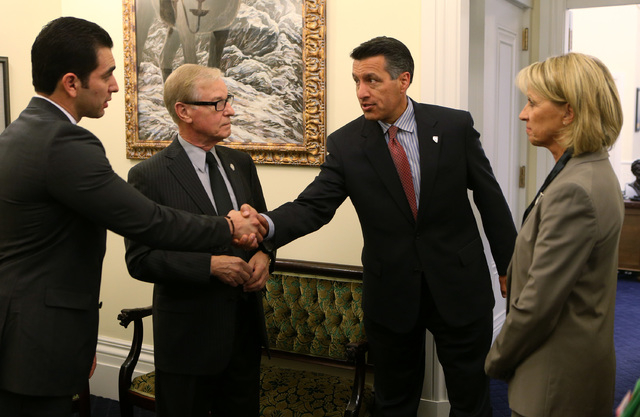 Nevada senators, from left, Ruben Kihuen, David Parks and Barbara Cegavske talk with Gov. Brian Sandoval, right center, at the Capitol in Carson City on Wednesday, Sept. 10, 2014. Sandoval called lawmakers into a special session to examine a deal that gives $1.3 billion in tax breaks and other incentives to bring Tesla Motors to Nevada. (AP Photo/Cathleen Allison) 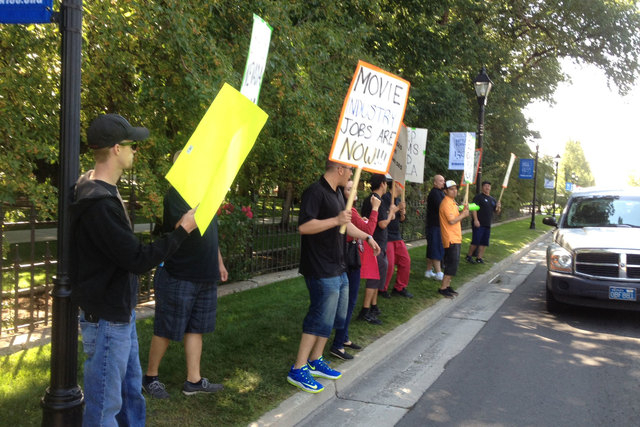 Supporters of Nevada's film tax credit protest at the state Capitol on Wednesday, Sept. 10, 2014. The credit is proposed to be cut during a special session of the Legislature to bring Tesla to Nevada. (Sean Whaley/Las Vegas Review-Journal) 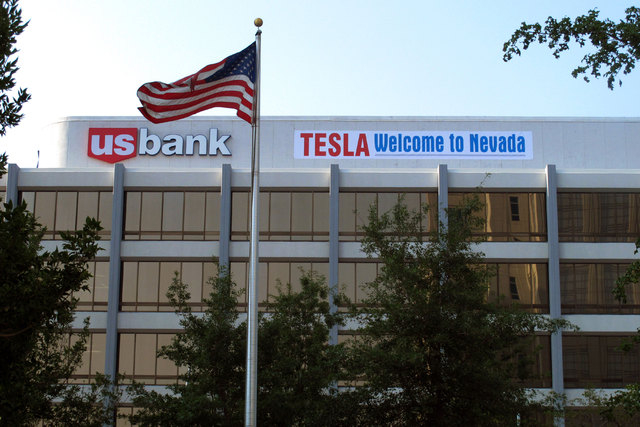 A banner welcoming Tesla to Nevada is hung on the US Bank building just south of the downtown Reno casino district on Tuesday, Sept. 9, 2014. State lawmakers are meeting in a special legislative session in Carson City on Wednesday to consider a package of tax breaks and incentives to seal a deal to bring the electric car maker's "gigafactory'' to the state. (AP Photo/Scott Sonner)

CARSON CITY — The Nevada Legislature launched a special session Wednesday to consider Gov. Brian Sandoval’s deal with electric car company Tesla to build a $5 billion battery factory in Nevada in exchange for a generous package of tax breaks that essentially will allow the company to operate tax-free for nearly a decade.

The two chambers began shortly before 1 p.m., but Assembly Speaker Marilyn Kirkpatrick, D-North Las Vegas, warned members it would be a long day with a lot of “hurry up and wait.” Hearings in the full Assembly were held on three measures to implement the deal, but Kirkpatrick’s prediction held true.

The main bill needed to seal the Tesla deal, Senate Bill 1, was finally introduced at 10 p.m., guaranteeing that lawmakers would be at their desks for a second day at least. Work on fine-tuning the collection of tax breaks and incentives that will be part of the Senate bill went on in private meetings all day.

The 38-page bill implementing the biggest piece of the Tesla deal will be heard today. It requires a $3.5 billion investment over 10 years for the company to get the tax breaks and other incentives.

And despite efforts to save the film tax credit program, the bill as introduced follows Sandoval’s proposal to transfer $70 million of the $80 million in credits to the Tesla deal.

While members of the Assembly asked pointed questions about the measures to allow Tesla to sell its cars in Nevada without going through a franchise agreement, give the company a break on its power costs and refocus an insurance company tax credit to the deal, there appeared to be little lawmaker opposition to the pact negotiated by Sandoval and his staff with Tesla Motors.

There was some public testimony questioning some of the assumptions about job creation and other aspects of the deal, but it was limited.

Sandoval issued a proclamation late Tuesday calling lawmakers into the special session, which could last several days given the complicated nature of the deal. It is estimated the package of incentives would cost the state about $1.3 billion, primarily in lost tax revenues, over 20 years.

The GOP governor, however, argued that the deal would diversify Nevada’s economy and bring in some $100 billion to the state over two decades and employ 6,500 people directly in the factory, resulting in thousands of additional indirect jobs as well.

“Nevada has the opportunity to attract new types of business to this state, which promises to provide more jobs, innovation and new technology,” Sandoval said in his proclamation.

Geoffrey Lawrence, director of research for the Nevada Policy Research Institute, questioned the figure used by the Governor’s Office of Economic Development for direct and indirect jobs as a result of the Tesla plant, suggesting a more realistic figure is under 10,000, rather than the 22,500 cited in an independent analysis.

He also criticized the lack of information made available to the public, including the release of the economic analysis only on Tuesday, the day before the special session.

The Tesla deal was hit from the left as well, with the Progressive Leadership Alliance of Nevada weighing in with its own concerns.

Nevada State Director Bob Fulkerson, in a letter to lawmakers, questioned the claim by Sandoval that there is an 80-to-1 economic benefit from the project to Nevada.

“The Legislative Counsel Bureau should be directed to provide you with an independent analysis of that claim because it mixes apples and oranges: taxpayer costs with benefits that are not equivalent tax-revenue gains,” he said. “If the 80-1 ratio is incorrect, what else is being fudged in the economic analysis?”

Outside the state Capitol, a couple dozen protesters opposed the portion of the Tesla plan that would shift $70 million in transferable film tax credits to help bring the electric car maker to Nevada.

Sen. Aaron Ford, D-Las Vegas, who successfully sought the credits in the 2013 legislative session to help boost the film industry in Nevada, said he was working on the issue.

Eduard Osipov, a film director from Las Vegas, said the protesters support the Tesla deal but do not want the film tax credit sacrificed in the process.

“We’re trying to save film, we’re trying to bring Hollywood to Nevada,” he said. “We’ve had $30 million worth of films coming to Nevada since the program was active.”

The proclamation didn’t specifically name Tesla, and the governor also noted that the Legislature may consider “any other matters” he brings to its attention. That could open the way for other companies to seek similar tax breaks as well.

But legislative leaders said Wednesday the main tax break bill does not single out any company. Rather it will set the threshold by which companies, including Tesla, could seek such incentives.

The tax breaks, credits and other provisions of the Tesla deal are expected to be considered in four bills.

Three of the bills already have been posted on the Legislature’s website:

■ Assembly Bill 1, which would revise provisions governing the Economic Development Electric Rate Rider Program. The program, created in 2013, allows the governor’s office of economic development to offer energy incentives to manufacturing and energy companies. It’s a performance-based program, requiring companies to repay electric rate cuts if they don’t build or hire as promised. But it needs to be tweaked to extend its life because Tesla would get a discount on its energy bill for up to 25 megawatts of power over six years under the deal with Sandoval. The discount is worth $8 million.

■ Assembly Bill 2, which would exempt certain manufacturers of electric passenger cars from “relating to franchises” to sell new vehicles, maintain them or make repairs. Tesla wants to sell cars directly to Nevadans, and this could allow that to happen.

■ Assembly Bill 3 would eliminate a home office tax credit for insurance companies that are based in Nevada. The more than 40-year-old program is used by a handful of companies at a cost of about $25 million a year. The bill as introduced maintains $5 million of the subsidy but will sunset completely in 2021 and allow much of the credit to be used for the Tesla deal.

The major bill would provide state and local tax breaks, including for sales taxes for 20 years. Also, Tesla wouldn’t have to pay the modified business tax of the personal and property tax, for 10 years. The tax abatements could add up to $1.1 billion, depending on how much construction material Tesla buys.

Tax credits bring the total to as much as $1.3 billion. A road project linking Interstate 80 to U.S. Highway 50 at the site of the planned 5-million-square-foot facility would add another $100 million or more to the total cost of the deal.

The Assembly and Senate are each meeting separately to speed up consideration of the bills. Once the legislation is approved by one house, it will head to the other house. Approval by both houses is required for passage.

If the Democratic-led Senate and Assembly approve the deal, Tesla would build the battery factory at the Tahoe-Reno Industrial Center in Storey County, east of Reno.

Sandoval said Tesla already has committed to hiring Nevadans and veterans, something Democratic leaders want in the proposed deal as well. Also, lawmakers want the company and the state to report to the Legislature on the progress of factory construction to make sure Tesla is meeting its end of the bargain.

“We don’t know what works unless we do that,” said state Sen. Debbie Smith, D-Sparks, chairwoman of the Senate Finance Committee. “We haven’t been down this exact path before, and we really owe it to our constituents.”

Mike Willden, chief of staff to Sandoval, said there are no specific tax abatements or credits proposed for Switch, the data storage center company with facilities in Las Vegas, in the legislation submitted to lawmakers.

Adam Kramer, vice president of government and public affairs for Switch, was in the Legislative Building but had no comment on any efforts by the company to secure tax benefits for proposed expansions in both Southern and Northern Nevada.

“The bill is to help businesses; any business that has the ability to meet the criteria could qualify under that scenario,” he said.

Kirkpatrick said the bill is like any other passed for economic development purposes.

“Any time that we do legislation, it applies to anybody and everybody who can meet that criteria, and I think the difference on this is we have a little higher standard because we are trying to bring in some higher type companies to our state and to really diversify the economy,” she said.

“It could be 10 companies but they still have to go through public hearings no matter who it is,” Kirkpatrick said.

Lawmakers will be paid $146.29 per day for the session, along with $149 a day in per diem. Travel costs are also covered.