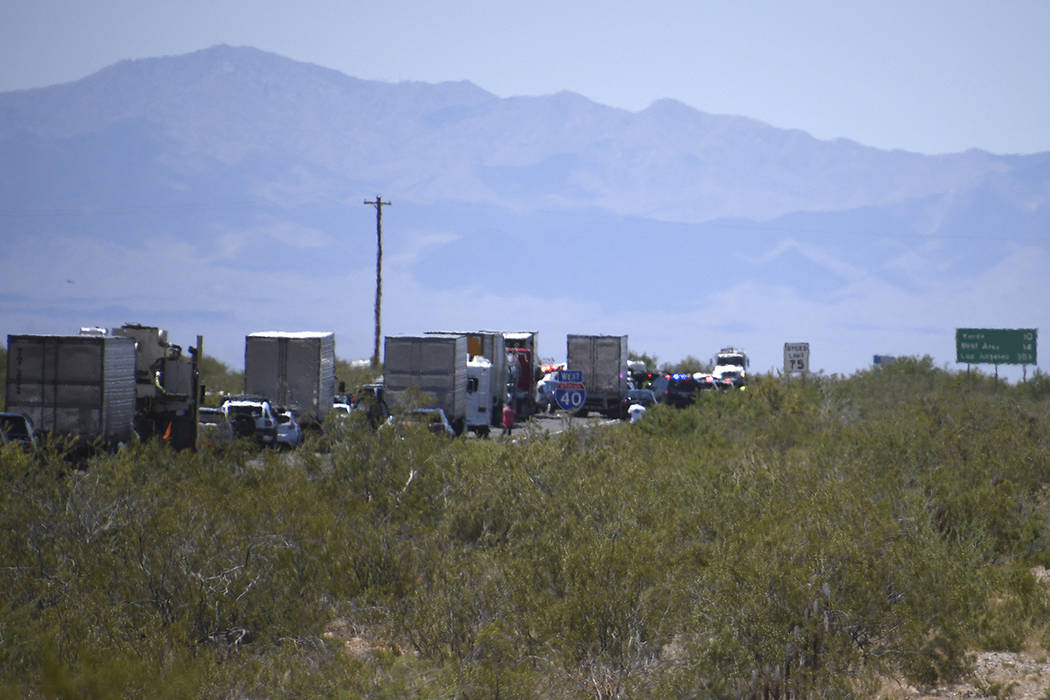 Traffic is stopped on Interstate 40 after a wrong-way crash Friday, May 24, 2019, near Kingman, Ariz. At least four people were confirmed dead in a wrong-way crash on a rural highway in the northwest part of Arizona, state troopers said Friday. The accident was just the latest in a string of fatal wrong-way wrecks this year in Arizona, which has a continuing problem with deadly crashes blamed on drivers headed the wrong way. (Vanessa Espinoza/Kingman Daily Minor via AP)

PHOENIX — A wrong-way crash on a rural highway in Arizona killed at least five people Friday, the latest in a string of recent fatal wrecks as the state struggles to combat the problem of drivers traveling in the wrong direction.

In the latest crash, an 82-year-old man from Nevada was driving the wrong way on a highway near the California and Nevada state lines, the Arizona Department of Public Safety said. He died at a hospital.

Few other details had been released, including whether anyone else was injured. State Trooper Vanessa L. Sevilla said she could not release the names of the victims until their families had been notified.

The wreck occurred about 14 miles (23 kilometers) southwest of the small Arizona town of Kingman on Interstate 40, a major east-west route that runs from central California to North Carolina.

The problem of wrong-way drivers in Arizona has become so serious that state lawmakers last year made it a felony to drive the wrong way while impaired by alcohol or drugs.

Transportation officials have installed a first-of-its-kind system to detect wrong-way drivers. Thermal cameras positioned at off-ramps along a 15-mile (24-kilometer) stretch of freeway in the Phoenix area alert authorities when a vehicle enters the freeway in the wrong direction.

Larger and lowered “Wrong Way” and “Do Not Enter” signs also have been installed on hundreds of freeway ramps and overpasses in Phoenix and rural state highways.

In another wrong-way wreck in Arizona earlier this month, a female driver slammed head-on into a vehicle on Interstate 10 in southern Arizona, killing a woman and her two adult sons. A third son was hospitalized with serious injuries. The woman traveling alone in the car that caused the May 5 crash also died.

Four people died in March when a pickup truck traveling the wrong way on a remote stretch of Interstate 10 in western Arizona collided head-on with a van carrying British indie-pop duo Her’s.

Bandmates Stephen Fitzpatrick and Audun Laading were killed along with their tour manager Trevor Engelbrektson as they headed to California after a performance in Phoenix. The truck driver also died.