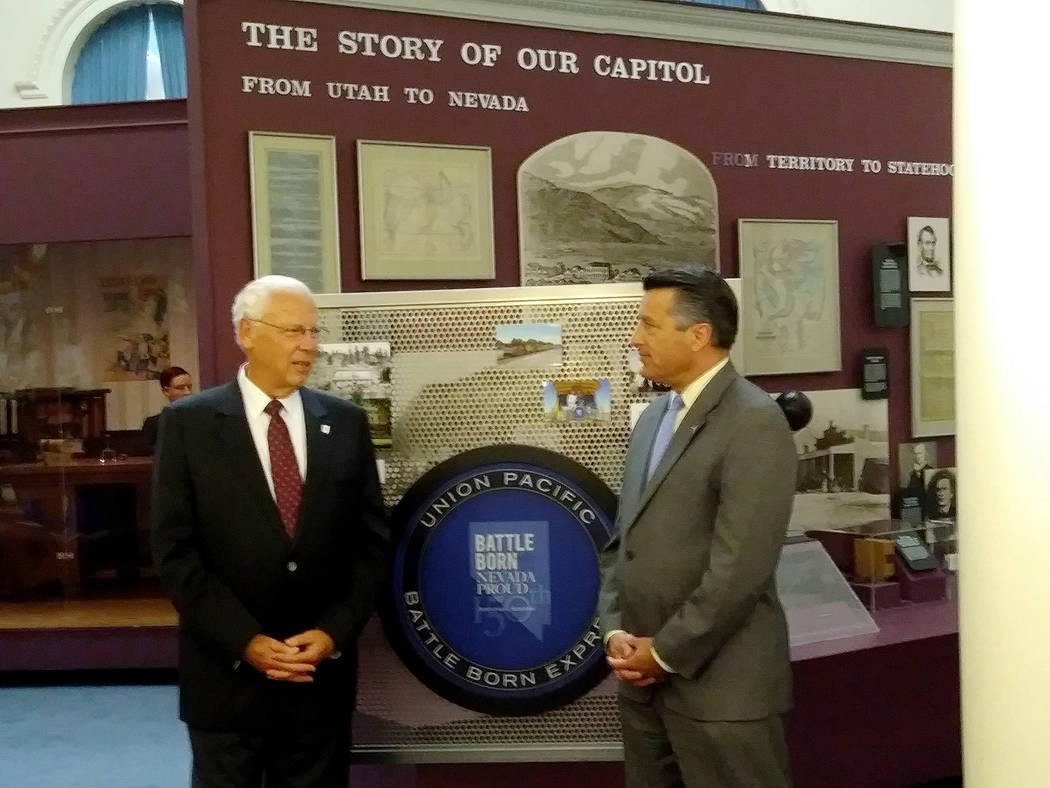 Gov. Brian Sandoval, right, and Bud Hicks, chairman of the Nevada 150 Foundation, visit before the foundation presents the state with a $700,000 check to renovate the Battle Born Hall exhibits at the State Capitol. (Ben Botkin/Las Vegas Review-Journal)

CARSON CITY — An exhibit at the State Capitol is getting a $700,000 makeover.

The Nevada 150 Foundation presented Gov. Brian Sandoval on Thursday with $700,000 that will go toward new exhibits and refurbishments for Battle Born Hall, the room where the Senate used to meet in the State Capitol.

“The Battle Born Hall will be something that will tell the story of Nevada,” Sandoval said at the event.

The current exhibits in the hall are largely focused on the history of the State Capitol building and Nevada’s transition from a U.S. territory to a state.

Sandoval said the new exhibits will reflect the state’s history leading up to the “new Nevada,” a phrase that reflects the Nevada’s growing diversity and changing economy.

Historic themes for the new exhibits include the state’s indigenous people, the Hoover Dam, and the Nevada Test Site.

Preliminary concepts for Battle Born Hall are expected to be finished this month, said Peter Barton, administrator of the Nevada Division of Museums & History. Pacific Studio, a Seattle firm, is handling the job.

The new exhibits will be finished next year. The tentative timeline has a soft opening in the summer of 2018, with a special event there for Nevada Day.

5
California coronavirus variant among those spreading in Nevada