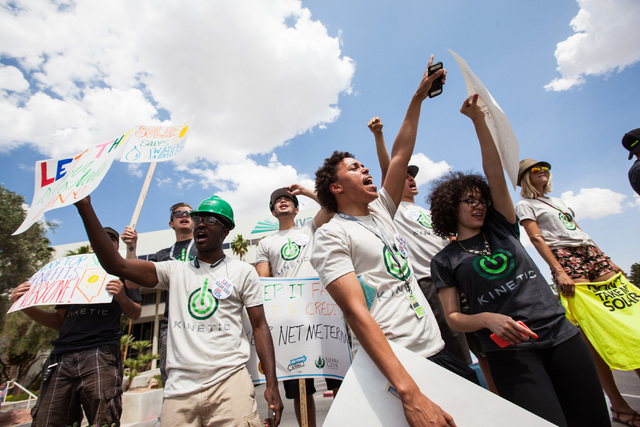 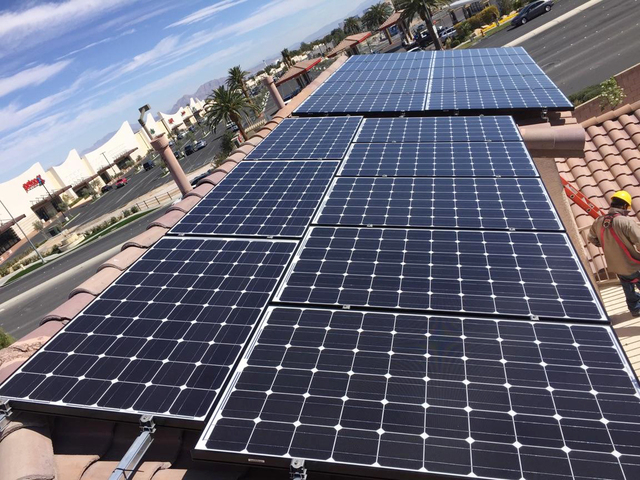 Summerlin resident Paul Huettner has been researching solar energy options for his home for the past three years. He decided to install at 5-kilowatt system with the help of American Patriot Solar. (Courtesy)

The future of a November ballot referendum seeking to return Nevada’s rooftop solar program to its original, more favorable rates for homeowners remains uncertain, but that hasn’t stopped the opposition from starting its campaign.

Citizens for Solar and Energy Fairness, a coalition including NV Energy that wants the new net metering rates approved by state regulators to remain in effect, is running a television ad and has a new website to educate voters on its opposition to the proposed referendum.

The coalition, which says it wants “affordable energy for all ratepayers,” states that the referendum to restore Nevada’s net metering program, should it qualify for the November ballot, would subsidize rooftop solar customers through those who do not have the systems.

“If the big rooftop solar companies get what they want, it would really hurt low income families and punish those Nevadans who do not have solar panels,” said Nicole Willis-Grimes, a spokeswoman for the coalition. “It’s patently unfair to require people to pay for something they don’t get a direct benefit from.”

According to the campaign’s website, 97 percent of Nevada families — including working and low-income families, seniors, and those who either cannot afford or do not want solar panels — are paying almost $12 million in higher power bills so that big rooftop solar companies can subsidize their customers. If left unchecked, the subsidy could grow to more than $100 million in the next 12 years.

“NV Energy is using bad math and scare tactics to try to keep customers from going solar, all in the interest to maintain its monopoly hold on power,” the group said in a statement. “You can bet it’s only accounting for the costs and none of the benefits of more homegrown solar energy in Nevada.”

The referendum is being sought by the No Solar Tax political action committee made up largely of rooftop solar companies. The coalition is trying to collect the 55,234 valid signatures needed from registered Nevada voters by June 21 to get the measure to the November general election ballot.

The group is doing so even though a Carson City district judge ruled the proposal does not qualify as a referendum and so cannot appear on the November ballot. That ruling is being appealed to the Nevada Supreme Court, and the signature effort is ongoing so that it can qualify if the justices overturn the lower court decision.

Rooftop solar advocates argue there is no subsidy from nonsolar customers and that the new rates that took effect Jan. 1 have killed the industry in Nevada, along with hundreds of jobs.

A weekly promise to watch from candidates

Three Democratic candidates running in the 4th Congressional District race have agreed to release information about campaign contributions they receive on a weekly basis — provided they all do it.

The weekly releases of contribution information means that voters can get an early look at who’s supporting the candidates. Without the voluntary releases, the public has to wait for quarterly reports to be filed every three months.

Lee’s campaign got a jump on the others, providing the first set of donations on Friday while saying it was “implied” that the releases were to start the following Friday.

So far, for the quarter that started April 1, Lee has raised $8,366. Of that figure, $7,600 was in itemized contributions of $200 or more. Her campaign sent reporters a spreadsheet of the donors’ names. Smaller sums don’t require disclosure of the contributors to the Federal Election Commission.

In a press release, Lee called on the others to do the same.

”I pledge to be transparent and fight for more transparency in government,” Lee said.