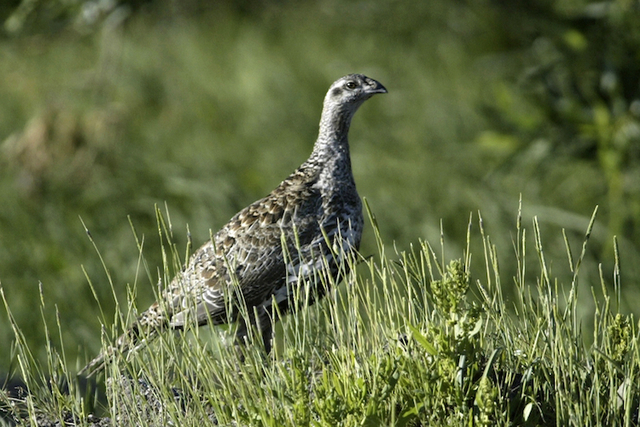 A sage grouse stands in a meadow at the Smith Creek Ranch, east of Fallon. (Cathleen Allison/The Associated Press)

BILLINGS — The oil and gas industry on Thursday challenged in federal court drilling restrictions imposed by the Obama administration to protect a struggling bird that ranges across 11 Western states.

The Western Energy Alliance and North Dakota Petroleum Council said they would ask a U.S. District judge in North Dakota to block sweeping land-use plans for the region adopted in September by the Interior Department.

The groups said local and state efforts to prop up populations of greater sage grouse have been effective. Sweeping changes to U.S. Interior Department policies were not needed to ensure the chicken-sized bird’s long-term survival, they said.

It marks the oil industry’s first attempt to undo federal policies that already have drawn opposition from both ends of the debate over the bird. The challenged plans cover about 165 million acres of land in California, Colorado, Idaho, Montana, Nevada, North Dakota and Utah.

Interior Department spokeswoman Jessica Kershaw said in response that the new land-use plans strike a balance between conservation and economic development. Their adoption was considered key to keeping sage grouse off the endangered species list and avoiding even more severe restrictions on development.

Kershaw declined to directly comment on Thursday’s lawsuit, the latest in a string of lawsuits over grouse.

Some wildlife advocates have said in an Idaho lawsuit that there are too many loopholes in new rules on oil and gas drilling, grazing and other activities blamed for the bird’s long-term decline. Mining companies, ranchers and officials in Utah, Idaho and Nevada have argued the rules impede economic development.

Western Energy Alliance Vice President Kathleen Sgamma said the group has not yet been able to quantify what harm is being done to oil and gas companies.

Instead, Thursday’s lawsuit targets the process by which the government adopted the new rules. Sgamma said officials did not allow for enough public comment before putting them into place.

“That’s where they’re legally vulnerable,” she said. “The oil and gas restrictions in the plans are based on science that overstates the threat” to sage grouse.

The Interior Department’s land-use plans for Wyoming were excluded from Thursday’s lawsuit. Sgamma said that was because the federal government’s plan largely conformed with the state’s own plan.

The grouse population once was estimated at 16 million birds across North America. It’s lost about half its habitat to development, livestock grazing and an invasive grass that encourages wildfires in the Great Basin of Nevada and adjoining states. There are an estimated 200,000 to 500,000 greater sage grouse.