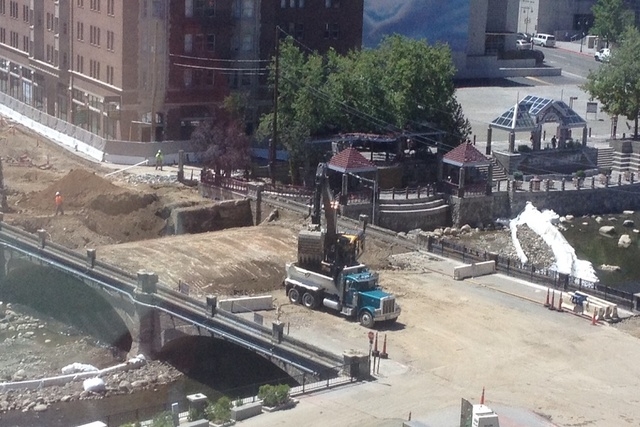 Demolition of the historic Virginia Street Bridge in Reno, made famous in the 1961 film "The Misfits" continued Friday, June 12, 2015. (Sean Whaley/Las Vegas Review-Journal) 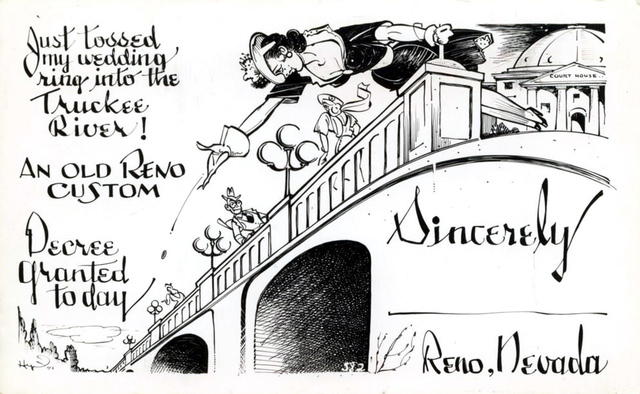 An old Reno custom: This 1941 Lew Hymers cartoon of a newly-divorced woman flinging her ring into the Truckee River helped to perpetuate the popular legend of the "wedding ring bridge," prompting generations to search the shallow waters for castaway bands. (Courtesy, Mella Harmon)

RENO — Downtown residents are watching with a mixture of loss and anticipation as demolition work continues on the historic Virginia Street Bridge, which played a brief but important supporting role in the Marilyn Monroe film “The Misfits.”

Built in 1905, the reinforced concrete bridge has succumbed to years of wear and tear and is being replaced with a new structure. As portrayed in the 1961 film, the bridge was known as the place where newly divorced women who came to Nevada because of the state’s short residency requirement would throw their wedding bands into the Truckee River.

Reno Mayor Hillary Schieve said she remembers her mother telling the wedding band story when she was a child, although it’s more likely urban legend than reality.

A Reno native, Schieve said she remembers her mom telling her the river was full of gold rings as they crossed the bridge.

“And later on you would see people down there with metal detectors thinking they would find gold because of all of the wedding rings,” Schieve said. “It is one of those childhood memories.

“We’re known as the Divorce Capital, so the bridge has a lot of significance,” she said.

History and preservation buffs are disappointed that the bridge will soon be just a memory. Memories are still fresh of the loss of the historic Mapes Hotel, which sat on the north side of the bridge, imploded in 2000.

But residents are also excited about the new span, which will have a single arch and become a new gateway into the resurging downtown district.

Kerrie Koski, street program manager for the city Public Works Department, said the bridge is not only unsafe but also causes problems during flooding. It is the most unsafe bridge in the state, she said.

The two-arched design of the bridge also serves to block debris during floods, most notably during the 1997 event that caused widespread damage in the community.

The new $18 million span will incorporate elements of the original bridge — to honor the history of the bridge — when it opens next May, including the lights. The historic railing has been salvaged and will be used in an area adjacent to the bridge.

Charla Honey, engineering manager for the city Public Works Department, said funding is coming from a variety of sources, including $10 million in federal bridge money and a variety of local funds.

There will also be an interpretive area on the southeast corner of the bridge talking about the history of the original structure.

The bridge was listed in the National Register of Historic Places in 1980.

“The design of the new bridge was intended to pay some respect to the arches in the current bridge,” Honey said.

The bridge is being built by Q&D Construction of Sparks.

The old span is being dismantled one arch at a time. The Truckee River has been diverted to flow through the north arch so the south arch can be knocked down into the riverbed, where it will be removed. Then the same process will occur for the second arch.

The low water levels in the river due to an ongoing drought are making the destruction of the old bridge much easier.

According to an article in Reno Historical, a special project by the University of Nevada, Reno Libraries, the bridge was known as the “Wedding Ring Bridge” and the “Bridge of Sighs,” and became the subject of national folklore.

According to the article by Mella Harmon, the legend, dating to at least the 1920s, held that divorcees, upon receiving their final decree from a judge, exited the Washoe County Courthouse, kissed the columns supporting the courthouse portico and proceeded past the Riverside Hotel to the bridge to throw their wedding rings into the river.

In “The Misfits,” Marilyn Monroe’s character, Roslyn, is told the tale while standing on the bridge, considers it for a moment, then places her ring back in her purse and heads to Harrah’s for a drink, Harmon wrote.

Schieve said the city is looking at the potential of making pieces of the bridge available to the public, but details are still being worked out.