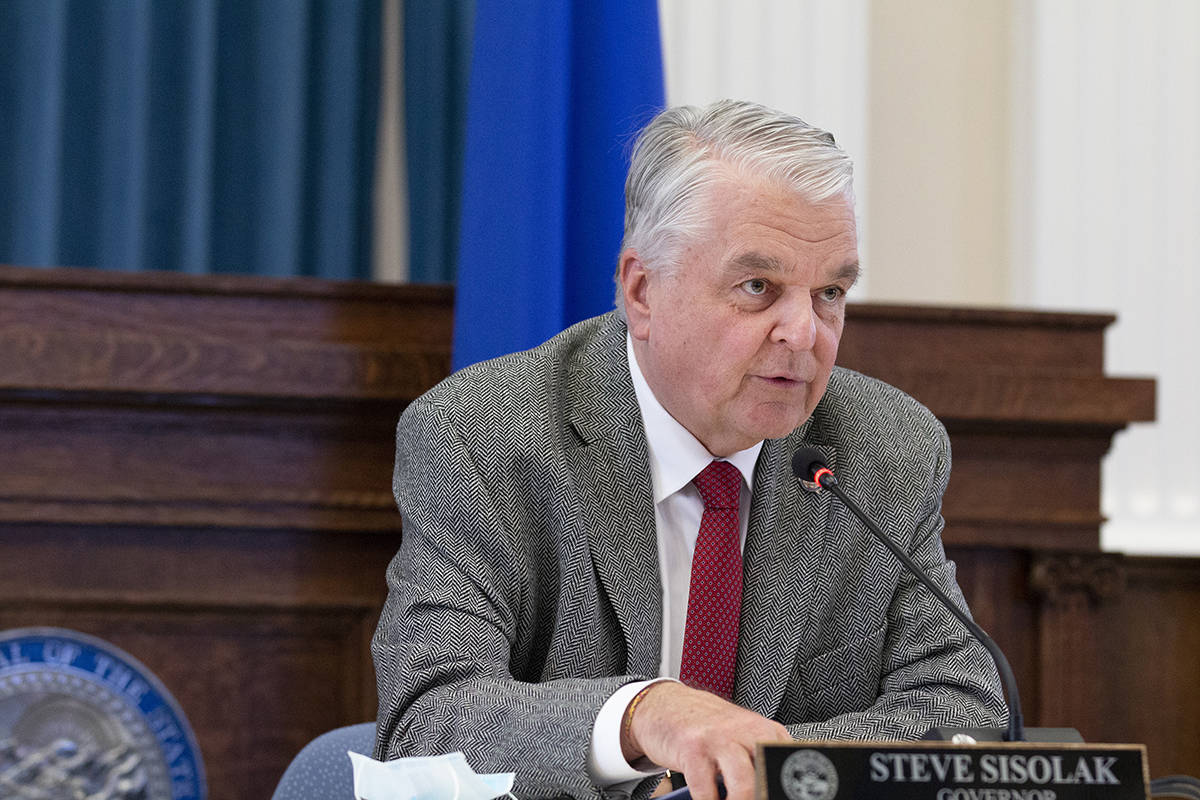 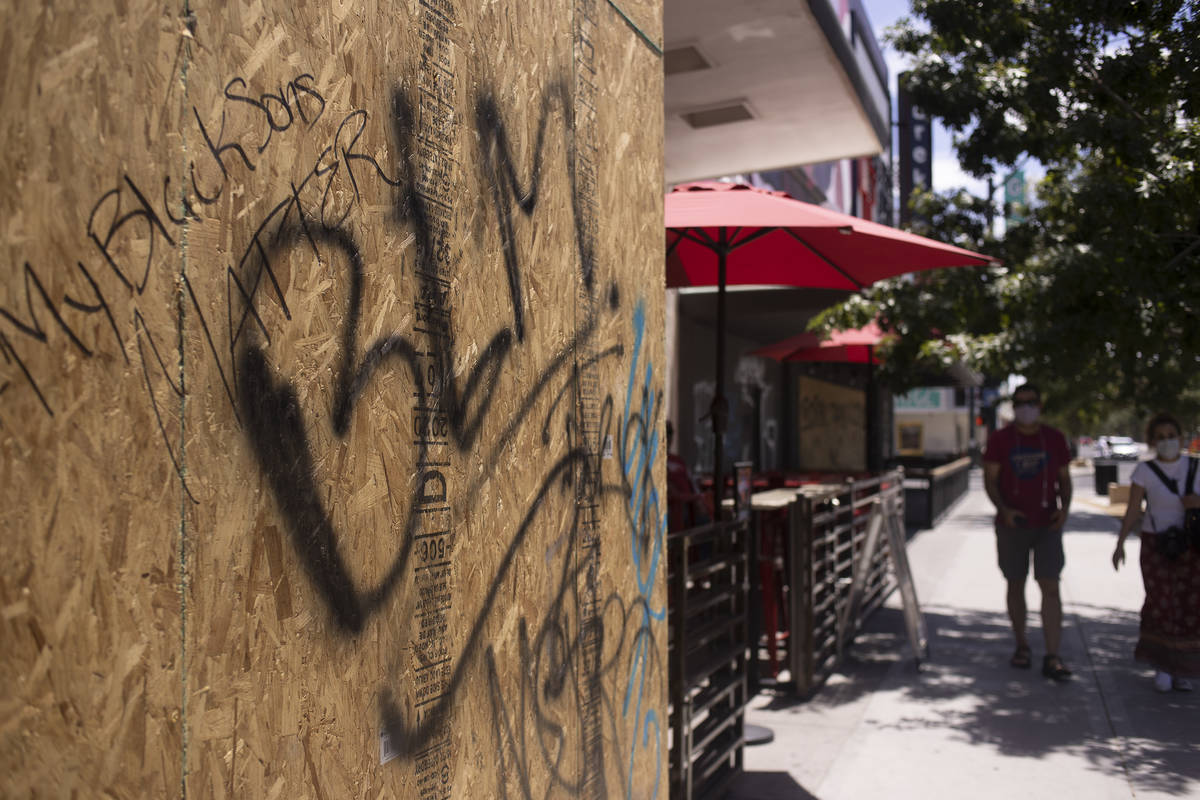 Graffiti abbreviating "black lives matter" and saying "my black sons matter" is on boarded up downtown businesses following a night of protests for George Floyd on Saturday, May 30, 2020 in Las Vegas. (Ellen Schmidt/Las Vegas Review-Journal) 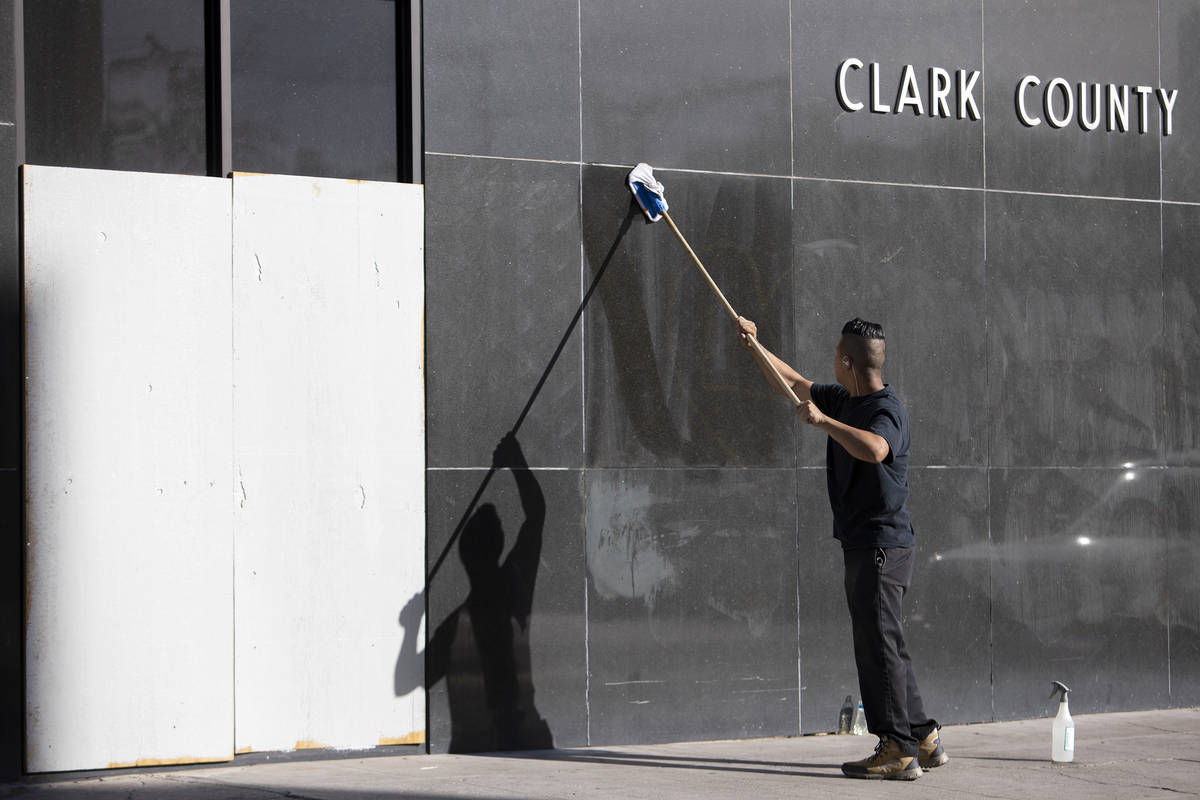 An employee from The D wipes down words written in the dirt on a Clark County building that were written at the previous night's George Floyd protest on Sunday, May 31, 2020 in downtown Las Vegas. (Ellen Schmidt/Las Vegas Review-Journal) 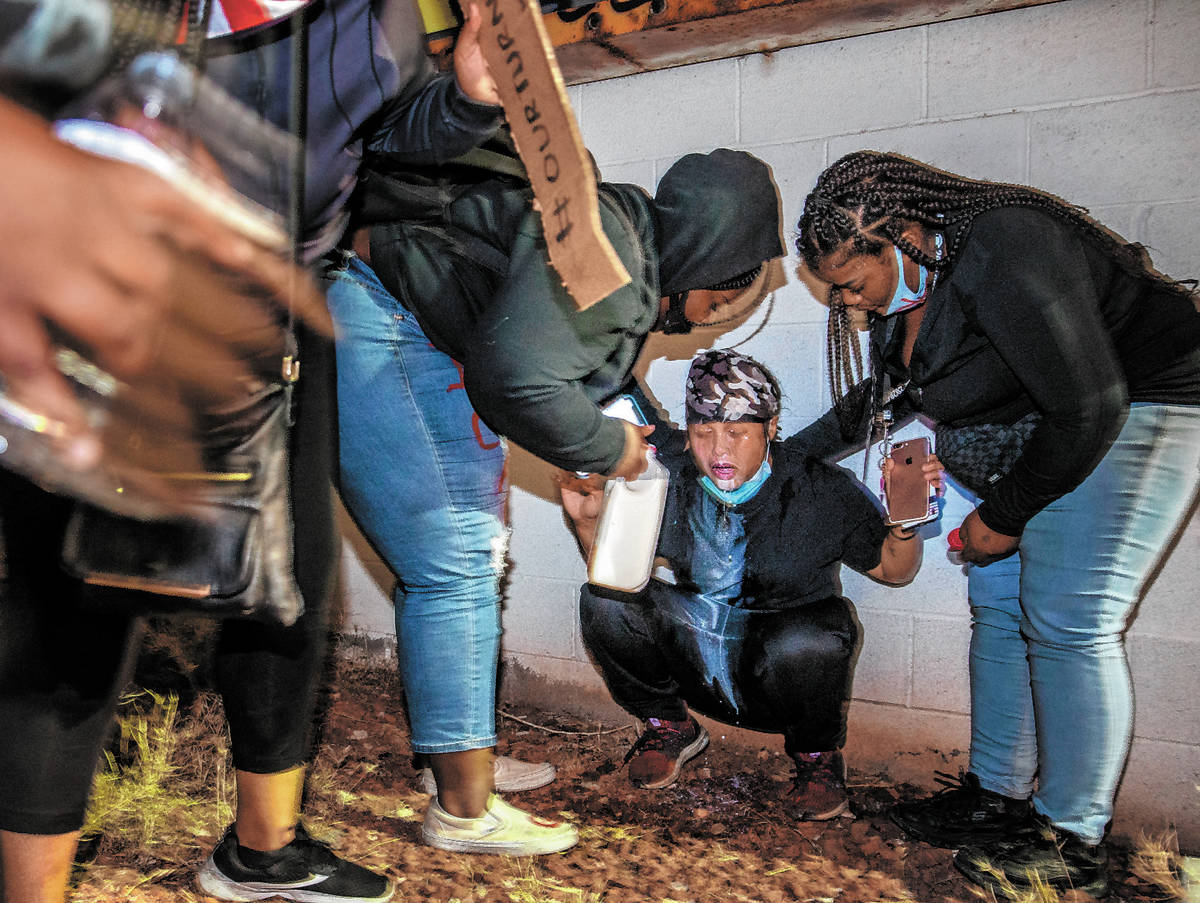 Protesters come to the aid of another who was tear gassed in the eyes by Las Vegas Police fire off more tear gas and pepper bullets during a Black Lives Matter protest and march along the Las Vegas Strip dedicated to the death of George Floyd on Saturday, May 30, 2020 in Las Vegas. (L.E. Baskow/Las Vegas Review-Journal) @Left_Eye_Images

Late Sunday afternoon, the city announced reimposition of an overnight curfew “out of an abundance of caution for public safety” beginning at 5:30 p.m. and lasting until 5 a.m. Monday. In an advisory, Mayor Hillary Schieve did not identity a specific threat of renewed violence. Only residents with an essential reason to travel, such as medical personnel or people traveling to or from work, may be out.

Residents were also admonished to avoid the downtown area, where a “heavy police and National Guard presence” were expected.

Speaking earlier in the day around at noon outside city police headquarters, as nearby volunteers continued cleanup and repair efforts, city officials were joined by Gov. Steve Sisolak. The governor angrily denounced instigators who might have come from out of state to foment trouble and locals who vandalized fragile businesses only now emerging from 10 weeks of COVID-19 shutdown.

“If you’re a bad actor, and you’re from out of state, and you came here yesterday to cause a problem, you are not welcome in the state of Nevada; you are not welcome in Reno,” Sisolak said, shouting. “If you came to cause destruction, go home. Get out of our state, get out of our city because you’re not part of what Reno is about. You’re not part of what the state of Nevada is about.”

‘Look at what you did’

Sisolak and Schieve said the rioters were not the peaceful demonstrators who had organized Saturday afternoon’s Black Lives Matter rally to protest the Memorial Day death of George Floyd in Minneapolis police custody. As evening arrived, that group mostly dispersed, officials said, and the city’s downtown erupted in chaos, with fires set, cars and other property vandalized, and windows smashed, including at City Hall. The downtown area was mostly cleared and some semblance of order restored by 11:30 p.m.

“Yesterday afternoon we saw a very peaceful protest and that was important for voices to be heard,” Schieve said. “And then you have people that came that were not part of that protest that wanted to incite violence on our city.”

“We have a lot of video. We have a lot of reports coming in,” Schieve said. “We will prosecute. If you were rioting in our streets and doing things that were harmful to our city, illegal activity, we will not tolerate that.”

Reno Police Chief Jason Soto said the rioting presented “an extremely challenging and logistical stretch of hours” for the 300-plus city police force. The department, helped by neighboring police departments and the Washoe County Sheriff’s Office, had “about 20 different locations that a lot of you weren’t aware that we had to protect and hold.”

Officials imposed a curfew at 8 p.m. and asked the governor to mobilize the state National Guard to help with protecting property while police officers in riot gear worked to push back against demonstrators with tear gas and flash-bang explosives. Amid reports that people were driving into Reno from outside the area, authorities moved to shut down freeways and “shut down every entry into the city of Reno,” said Soto, who is moving out of the post to city manager.

The Washoe County Sheriff’s Office reported 23 arrests — 16 from Reno, four from neighboring Sparks, one from Fallon, and one each from the California towns of Truckee and Anderson. Most were charged with trespassing and resisting an officer.

Acting Reno Police Chief Tom Robinson, Soto’s successor, gave a slightly different count. He said city police logged 21 arrests for “mostly minor offenses” including unlawful assembly, violating the curfew and obstructing a police officer. Twelve of those arrested claimed to be from Reno but did not have documentation to prove it.

“These are challenging times, and I understand there are people in our community who do not feel heard or seen,” Balaam said. “Let me tell these family members — I see you, I hear you and I will continue to listen. But we must listen to each other peacefully and respectfully. I implore Washoe County to not tolerate the violence we witnessed last night.”

Reno City Hall, vandalized and entered by rioters Saturday night, was to be closed Monday for additional cleaning and damage assessment. Though rioters entered the building, Soto said, nothing of value was removed.