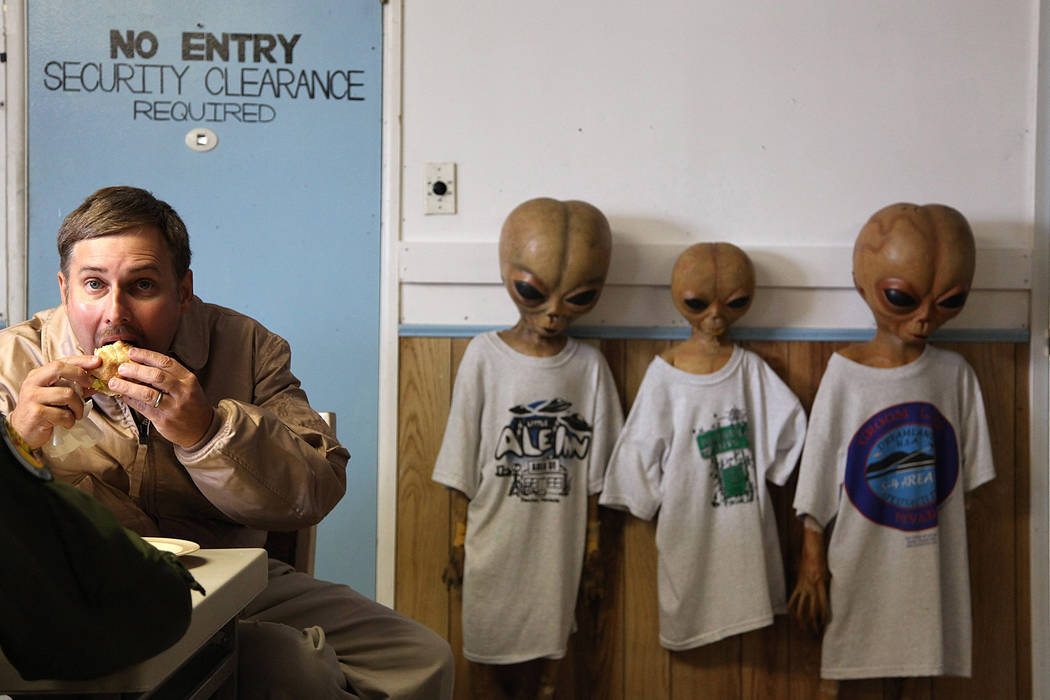 Peter W. Merlin of Lancaster, California, eats lunch during a gathering of the Roadrunner Internationale at the Lil'A'Le'Inn in Rachel on Wednesday, Oct. 5, 2011. (Las Vegas Review-Journal file) JUSTIN YURKANIN/Las Vegas Review-Journal Peter W. Merlin, of Lancaster Calif., eats during the Roadrunner Internationale conference at the Lil'A'Le'Inn in Rachel Nevada on Wednesday, October 5, 2011. Merlin is the historian for the organization. The convention chose to get together in Rachel, because members of the Roadrunners Internationale can finally talk about what they did on nearby Area 51. 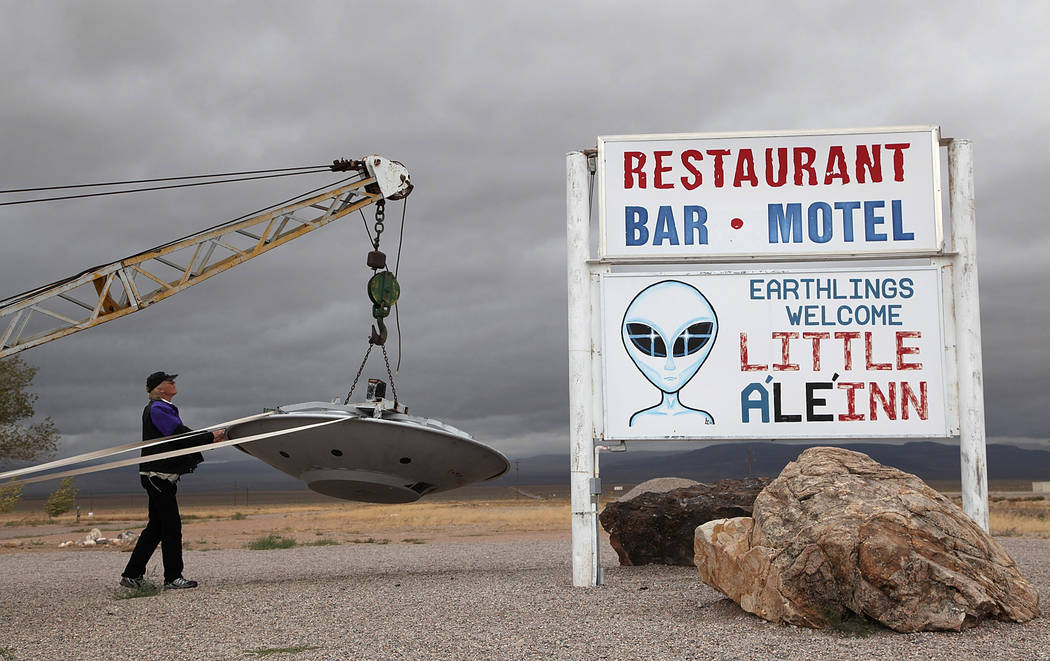 It may be the silliest thing to hit the Nevada desert since Indiana Jones survived an atomic blast by ducking inside a refrigerator.

“Storm Area 51, They Can’t Stop All of Us,” the jokey Facebook event created by pranksters June 27, achieved critical mass on Monday as more than 1.2 million people had pledged to “see them aliens” by storming the secretive military facility Sept. 20.

As interest spread in the fake event, the Air Force issued a prepared statement designed to keep anyone from taking things too seriously.

Kleinholz wasn’t authorized to discuss specific measures the Air Force might take should anyone try to break onto the property.

“Just like any military installation, there are different levels of security, depending on what has been picked up and what has been detected,” he said. “And, obviously, the degree of response may escalate depending upon the perceived threat.”

By Monday night, what had sounded like an invasion began taking on the air of a celebration. An extraterrestrial Woodstock, if you will.

“Just so you know, we had nothing to with it,” Connie West, co-owner of Little A’Le’Inn in Rachel, said of the Facebook post. “Am I gonna capitalize on it? Absolutely.”

In her 31 years at the small motel, bar and restaurant she runs with her mother, Pat Travis, West said she’s never seen anything like the attention generated by the “Storm Area 51” movement.

“I literally hang up the phone, set it down and walk 2 feet, and the phone is ringing again,” she said, as patrons could be heard in the background discussing the latest developments.

Travis’ day began at 3 a.m. with a call from the BBC, and the interview requests rarely stopped — even though Rachel is roughly 100 miles from the suggested rallying point in Amargosa Valley.

George Harris, owner of the Alien Research Center in Hiko, along the Extraterrestrial Highway, is expecting to be overrun Sept. 20.

Asked about that estimate, Harris responded, “I promise you that.” By comparison, his tourist attraction averages about 125 visitors a day.

Harris, who’s also the CEO of Alien Tequila Spirits Co. in Las Vegas, said he believes interest in the event stems from frustration over the secrecy associated with Area 51.

“There’s an underbelly thing with all Americans that the government’s not honest with them.”

But, he stressed of anyone who shows up Sept. 20, “If they behave themselves, they can have fun.”

Along those lines, he’s thinking of setting up a 20-by-40-foot screen to show alien conspiracy videos. He may even hire a band or two.

Back in Rachel, West said three or four bands contacted her on Monday asking if they could bring portable stages and play on her property. “Absolutely!” she declared. “I’m not paying ’em!”

All 10 of her motel rooms were booked days ago for Sept. 20, but West said she has 30 acres that can be used for camping.

“I think a lot more people are going to come out here than some of the locals think,” she said, sounding weary from a day of being interviewed, yet hopeful for the rush of curiosity seekers.

West won’t commit to bringing in new merchandise to sell — yet — in case the crowds don’t materialize. But she is making one concession: concessions.

“I was already asked by locals if I’ll get a popcorn station. I’m like, ‘sure,’” she said, somewhat begrudgingly.

“I know a lot of people that are, like, ‘Hey, we just wanna come and watch this. We don’t wanna be part of it. We just wanna watch what people are going to do.’ ”