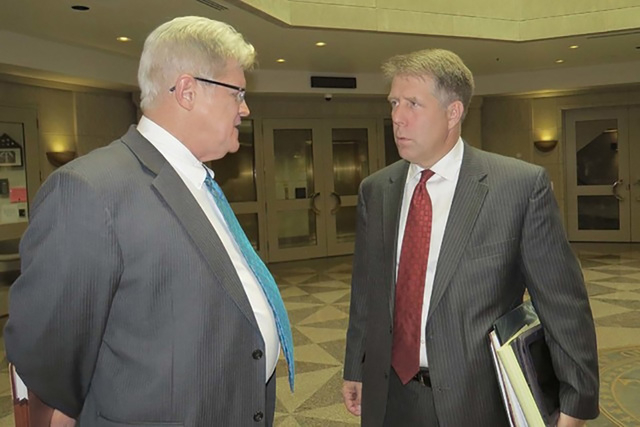 CARSON CITY — Backers of a move to repeal Nevada’s new commerce tax are not ready to quit after the state Supreme Court issued a potentially lethal blow to their efforts, state Controller Ron Knecht said Thursday.

Knecht, a leader in the RIP Commerce Tax referendum, said organizers are weighing whether to rewrite the defective description to meet the court’s mandate, which would require a full-court press to collect 55,000 signatures by a June 21 deadline, or ask justices to reconsider their unanimous ruling.

“We’ve been doing our due diligence to assess our options,” Knecht said.

He said the group is working with Americans for Prosperity, a conservative advocacy group founded by billionaire brothers Charles and David Koch, to weigh whether a new signature-gathering effort is feasible given the short time frame.

“We’re working with them to determine the probability of success if we have to go the new petition route,” Knecht said.

Opponents of the repeal effort, meanwhile, are confident the issue is dead and won’t reach the November ballot.

Matt Griffin, representing the Coalition for Nevada’s Future, a group of business interests that supported the tax and fought the referendum in court, said the logistics of returning to court and gathering signatures from scratch make the likelihood of meeting the signature threshold slim, even in a best-case scenario.

“In my opinion, I don’t see how that’s possible,” Griffin said.

The commerce tax was part of a $1.5 billion revenue package pushed by Gov. Brian Sandoval and approved by the 2015 Legislature to fund the state budget and the governor’s education agenda. It imposes a levy on businesses with $4 million or more in annual revenue and is projected to generate $60 million a year.

In a unanimous ruling Wednesday, justices said the description of effect — a required 200-word explanation of what the petition does — was flawed because it doesn’t tell voters the consequences the measure would have for the state budget.

“Accordingly, we conclude that the referendum’s description is deceptive for failing to accurately identify the practical ramification of the commerce tax’s disapproval, and any signatures obtained on petitions with this misleading description are invalid,” Chief Justice Ron Parraguirre wrote for the court.

“Calling the repeal effort ‘deceptive’ is particularly rich, given that the claims of a budgetary shortfall are essentially pure fiction,” wrote Michael Schaus, the institute’s communications director. “Repeal of this Depression-era tax scheme will have virtually no impact on the government’s financial affairs before the legislature meets, regardless of the apocalyptic rhetoric coming from state coffers,” he said.

The institute and other critics of the tax argue that if voters approve the repeal measure, any revenue loss wouldn’t occur until next year, giving lawmakers time to balance the budget when they convene in February.

“The court’s ruling says the petition must now include language warning against a hole in the state budget — a hole that, in truth, is imaginary,” Schaus said.