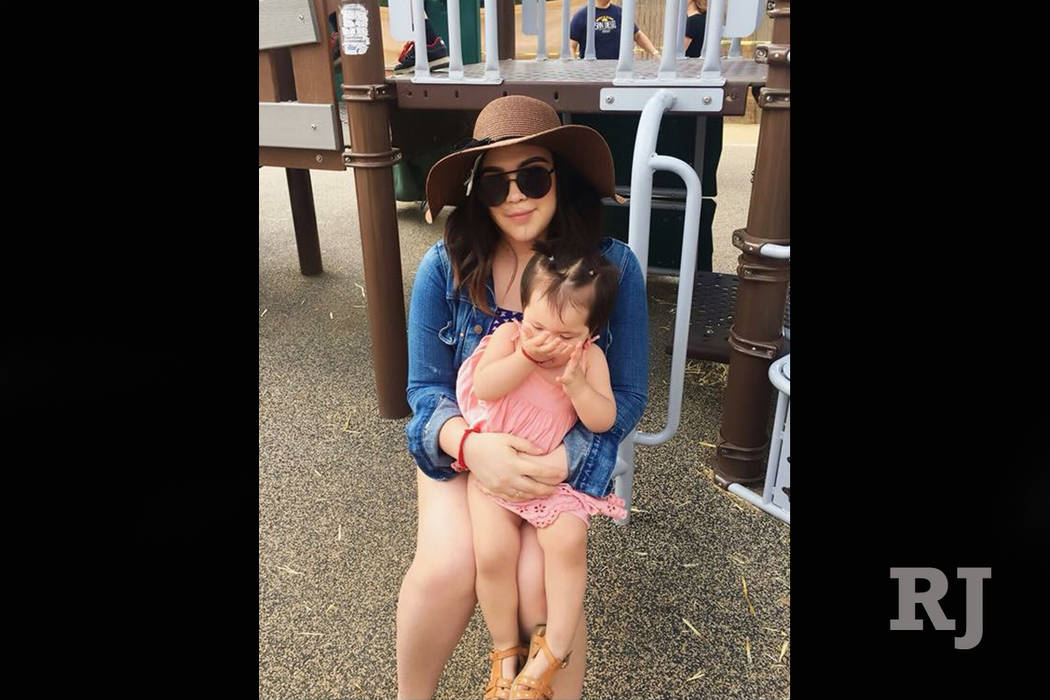 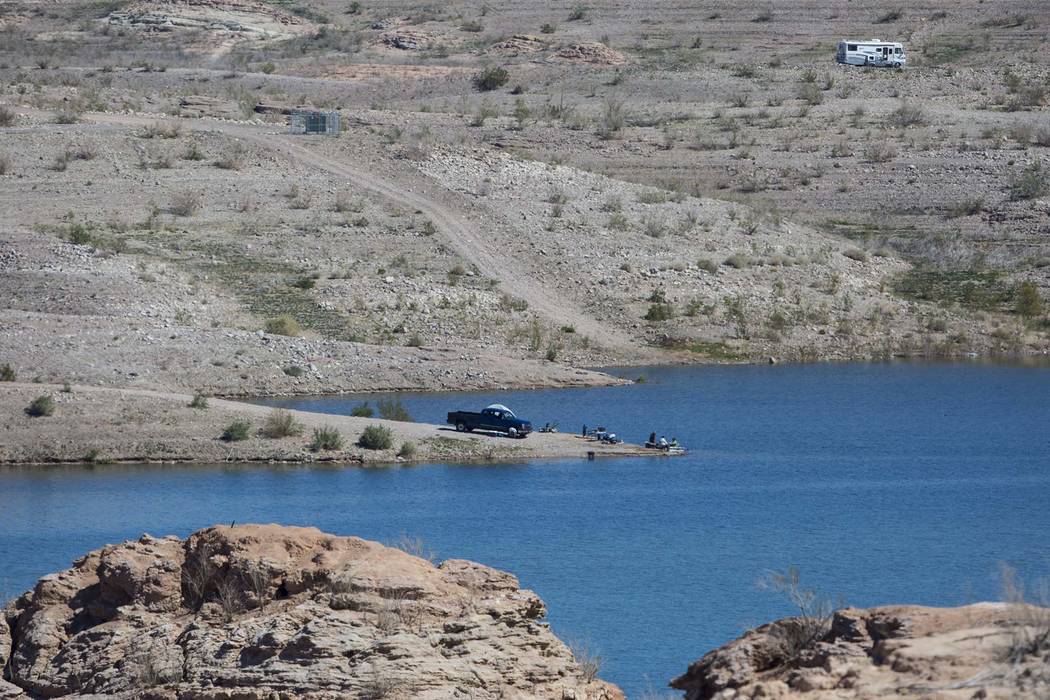 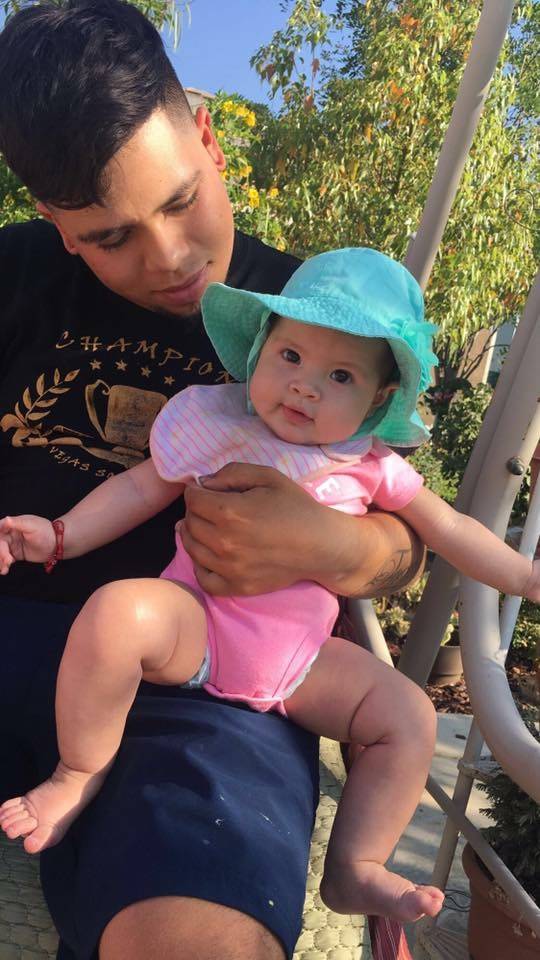 Anthony Mondragon poses with his daughter, 1-year-old Emma Rose Mondragon, in this undated photo. He was pulled out of Lake Mead early Sunday morning with the child and his girlfriend, Jeanette Zaltierrez. Park rangers rescued 17 people, nine of whom were treading water after a boat capsized. (Jeanette Zaltierrez) 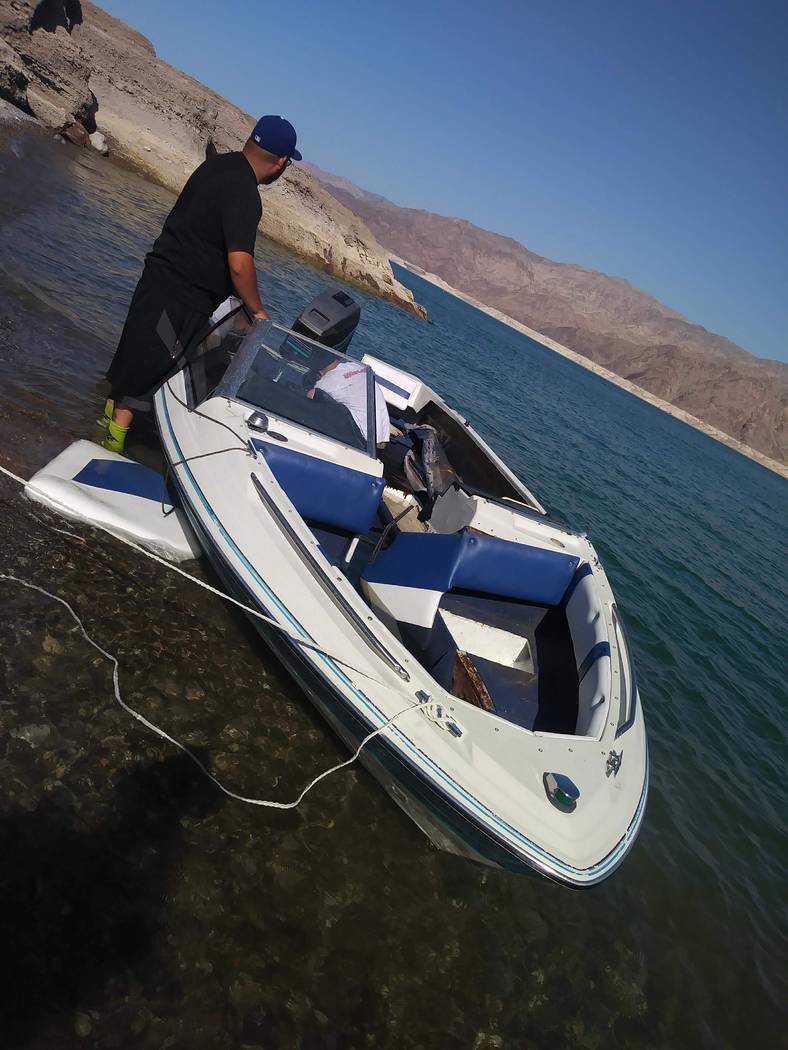 Juan Garcia helps drag his boat out of Lake Mead on Monday morning. Brian Estarza was driving the boat when it capsized early Sunday morning. National Park Service rangers rescued 17 people, including Estarza and eight others who were in the water after the boat sank. (Brian Estarza)

Hours before dawn, stranded in Lake Mead with no rescue in sight, Jeanette Zaltierrez prayed for her young daughter.

The 22-year-old woman was just thrown from a boat with eight other people. Her daughter and her friend’s toddler were being thrashed by waves. She didn’t know if she would be able to keep her head afloat for long.

“We told ourselves we can’t give up,” Zaltierrez said. “We have to stay strong and hopefully someone would find us.”

Eventually someone did. Early Sunday, National Park Service rangers rescued 17 people from the Lake Mead National Recreation Area. Nine people — including Zaltierrez, her boyfriend and their daughter — were pulled from the water while the rest were stranded onshore with another boat.

Vanover said the recreation area’s weather stations showed wind speeds up to 30 mph, with gusts up to 38 mph, when the boat capsized in water, which was about 76 degrees.

At the time of the accident there was no wind warning for boaters. Vanover said the National Weather Service is going to meet with rangers to determine if anything could be done differently.

Although two children and an adult were taken to a hospital after the accident, everyone involved has recovered, Zaltierrez said.

The group of friends wanted to share a fun afternoon barbecue at Lover’s Cove, Zaltierrez said. But once they were ready to leave, the winds were at dangerous levels.

Brian Esparza, another person with the group, said some friends took his larger boat toward the marina to unload heavier items. They were supposed to come back for everyone else, including a 3-year-old and Zaltierrez’s 1-year-old daughter.

Time passed, the waves ebbed and flowed, and the others didn’t return. Zaltierrez didn’t realize it, but the others had beached the boat and started walking around the lake to reach her group. But there was no cell service to communicate.

Esparza said he wanted to wait until sunlight to leave, but the children were tired. The group decided to try their luck with the wind and open water in his friend’s smaller boat.

“Which was a bad mistake, but I didn’t want to keep them out there with their babies,” the 25-year-old said.

During the barbecue, the waves were only 3 to 4 feet, he said. Once the boat left the cove, the waves reached up to 6 feet. The boat began taking on water.

They tried to stay calm, but one wave was too much. The boat flipped. Zaltierrez, a stay-at-home mom, clung to her daughter.

“It felt like we were drowning ourselves just trying to pull her up so no water would hit her,” she said. “We were just praying to God: We can’t die like this.”

Esparza has been boating on Lake Mead since he was in diapers. He has had a few close calls but has never capsized a boat.

He also never learned how to swim.

Because of the weather, Esparza decided to wear a life jacket that night. When the boat flipped, he saw his friend trying to swim to shore with her toddler, who was wearing a floaty.

“Eventually she’s going to get tired of swimming, and she’s not going to be able to hold the baby up,” he remembers thinking. “It must have took us about an hour and a half to swim from where the boat landed to shore. I want to say no more than an eighth of a mile away from shore, but it was just the waves were so big.”

When Esparza made it to shore, he found the Jet Ski, which had been carried there by the waves, but he couldn’t start it.

“We swam back into the water to give them floaties just in case the boat sank,” he said. “Once I got there, maybe 20 minutes after that, the rescue team showed up, so I grabbed one of the babies, and I swam over to the rescue boat and gave them the baby.”

After leaving the cove at 12:30 a.m., Esparza said, they didn’t make it to the marina with the rescuers until around 4 a.m.

While Esparza was dog paddling in his life jacket, Zaltierrez was still praying.

Her phone was at the bottom of the lake, but her friend’s husband held onto his. He called 911 while grabbing the sinking boat. The Lake Mead Interagency Communication Center received the call at 1:55 a.m. but could hear only faint screams for help. The phone was still in the man’s mouth.

Zaltierrez’s friend also managed to notify other people, she said. All they could do was wait until help arrived at 3 a.m.

“I was so thankful, super, super thankful,” she said. “It was like it was a scene off of Titanic, and the guys are flashing the lights trying to find someone. That’s exactly what it felt like.”

Zaltierrez said she isn’t afraid of the water now, but she wants others to understand how dangerous the wind is and that life jackets can save lives.

Esparza returned to the water on Monday to retrieve his friend’s sunken boat. He said the experience won’t keep him away from the lake.