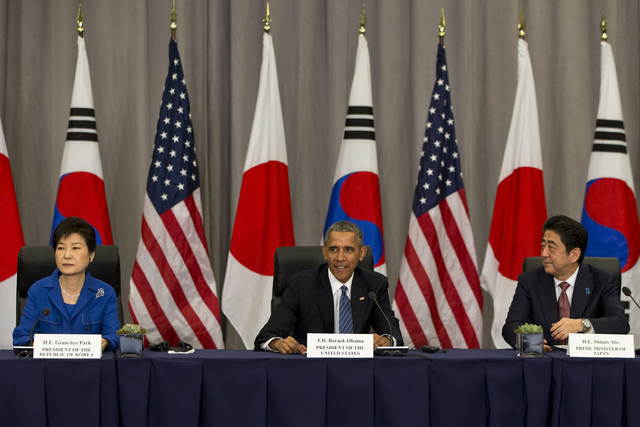 WASHINGTON — As President Barack Obama hosts other world leaders in his final summit on nuclear security, several Nevada college students are expected to join a nearby rally Friday to push for eliminating nuclear weapons from the planet.

“Securing nuclear material is important, but there’s no such thing as nuclear security while there are more than 15,000 nukes in the world,” said Eric Michael, a senior at UNLV. “We should be moving toward the future rather than hanging on to Cold War weapons.”

Not only does the United States have enough nuclear weapons “more times than necessary” to destroy the human race, Michael said, but the country pays trillions of dollars to maintain those weapons.

Citing what he called “stumbles” in the past, he questioned the U.S. ability to even store the weapons properly.

Cervantes said she hopes the rally in downtown Washington focuses the attention of those in power about the importance of eliminating all nuclear weapons and educates other Americans as well about that goal.

Both Michael and Cervantes are criminal justice majors.

Michael said he hopes to begin his career as a crime analyst after graduating in December, while Cervantes said she hopes to enter law school.

Dwight Cabanilla, a junior majoring in international affairs at the University of Nevada at Reno, said he also plans to participate in the rally.

Cabanilla said he became involved in Global Zero after talking to a representative visiting his campus.

Friday’s rally will a first for all three.

It is being organized by Global Zero, an international group that was launched in 2008 to work on eliminating nuclear weapons.

Brett Abrams, a spokesman for the event, said 50 leaders from 30 states are expected to attend the rally.

Both Cervantes and Michael said they became involved with Global Zero after hearing a representative speak at one of their UNLV classes.

“One of my professors liked what the group was doing and gave him the first 15 minutes of the class to tell us about it,” Michael said. “That sounded awesome. I picked his brain after class and pretty much got into it from there.”

Michael said he hopes to create a local chapter at the university.

According to the agenda provided by Global Zero, the rally will be just minutes away from Obama’s Nuclear Security Summit.

In addition, participants will hear from experts on issues surrounding nuclear weapons and experience advocacy and campaign training.

Abrams said Global Zero will help pay the expenses for those attending the event.

With its process dating back to a 2009 speech Obama gave in Prague, this week’s summit is the fourth in various locations since 2010.

Obama and more than 50 world leaders have been working to prevent nuclear terrorism, counter nuclear smuggling and enhance nuclear security through the summit process, according to a White House briefing.