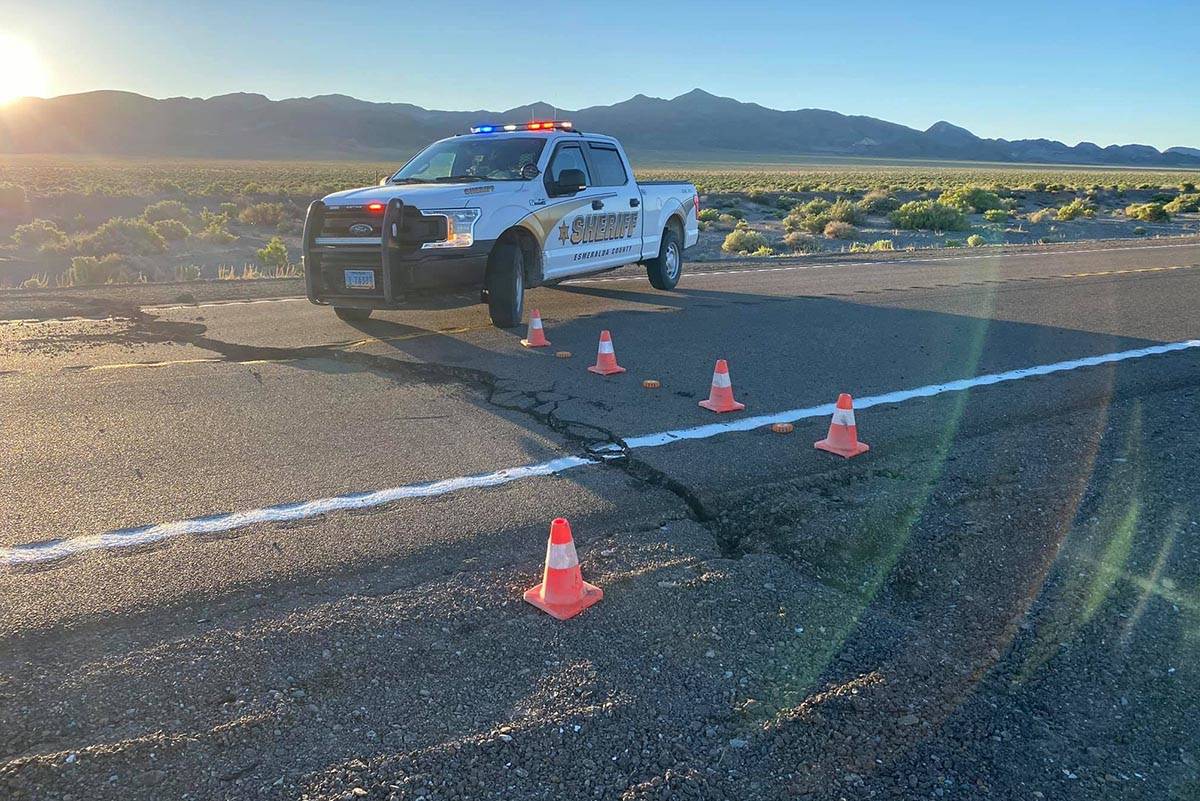 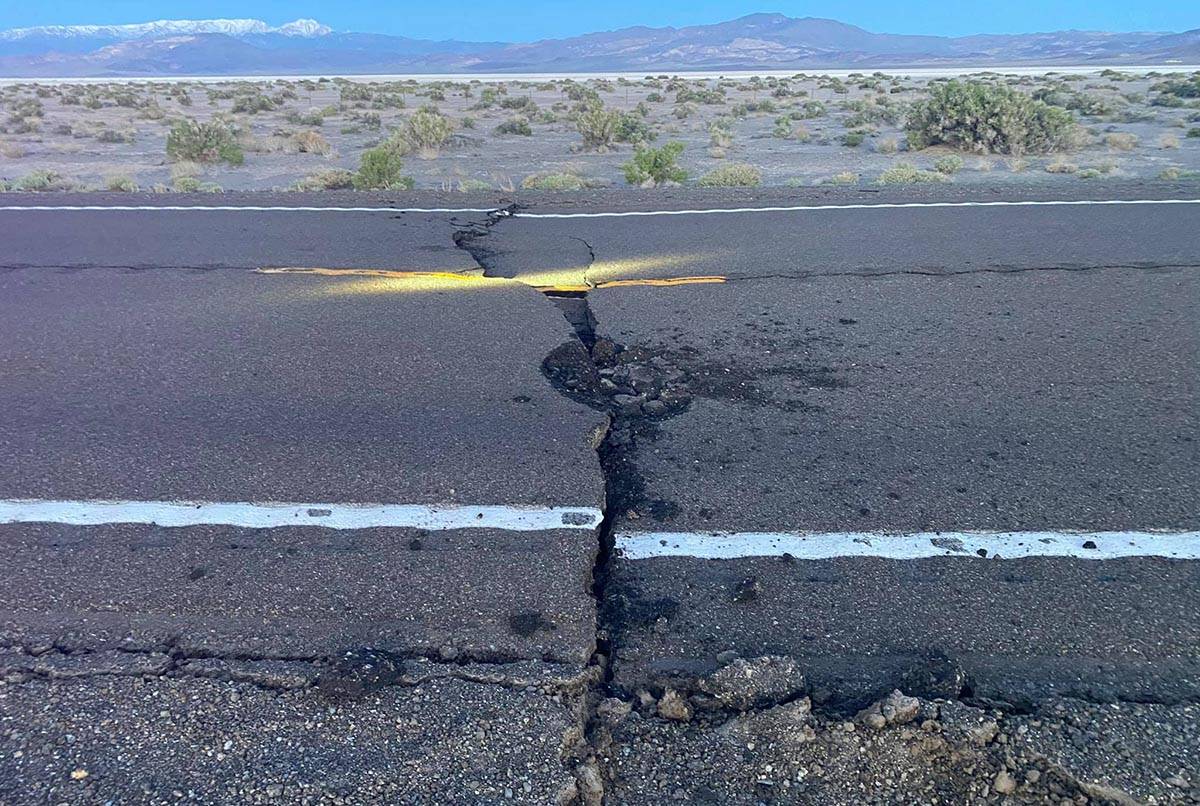 Road separation is evident on U.S. Highway 95 near Coaldale in western Nevada after a 6.5-magnitude earthquake on Friday, May 15, 2020. (Esmeralda County Sheriff's Office) 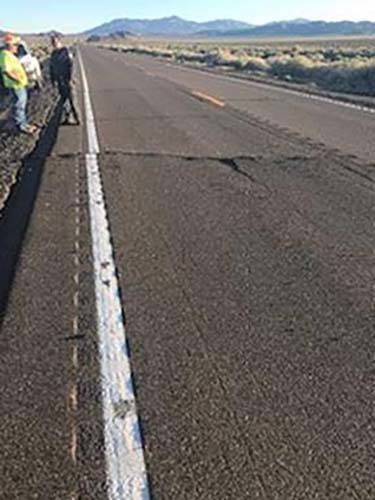 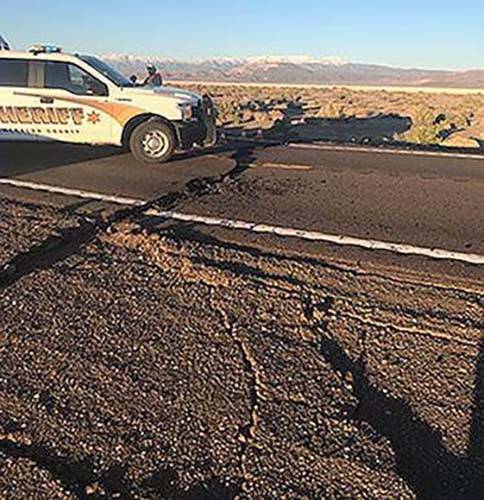 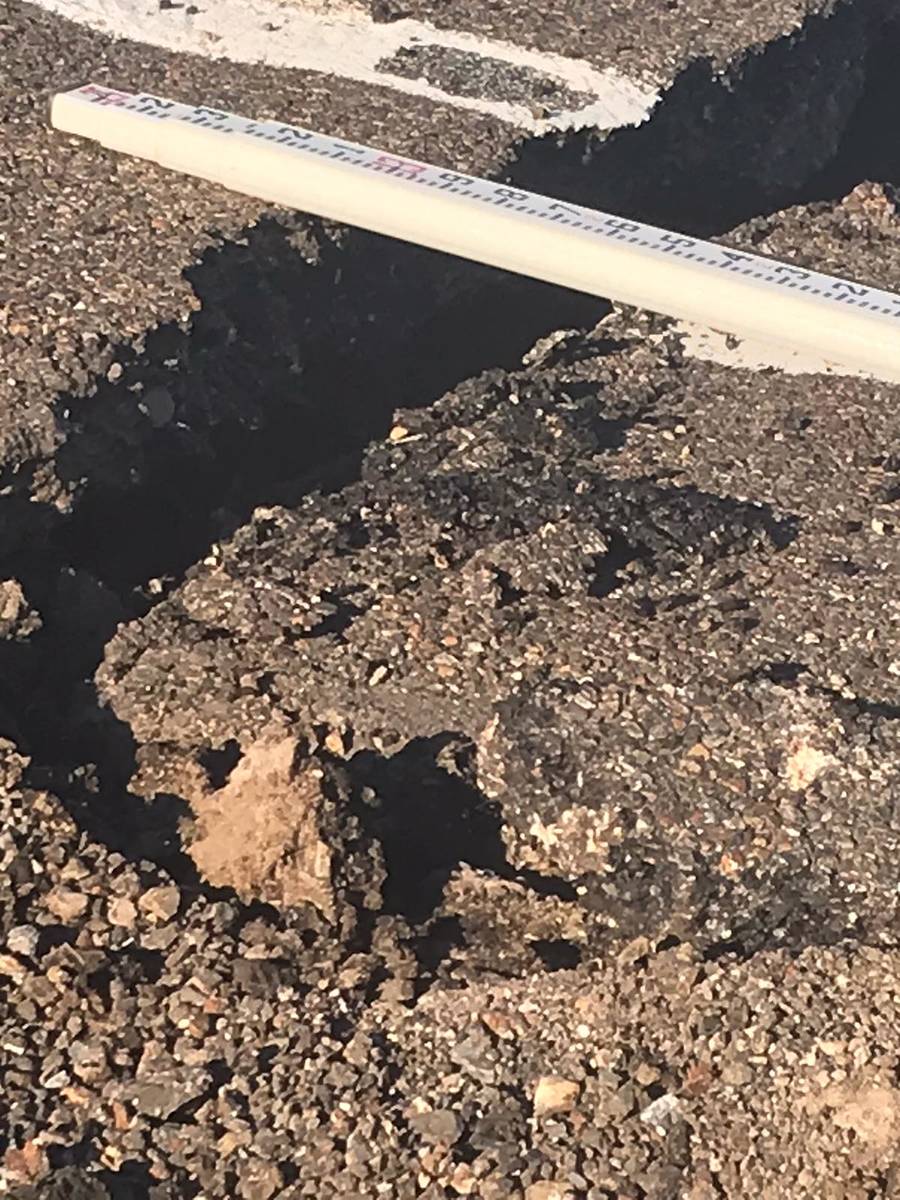 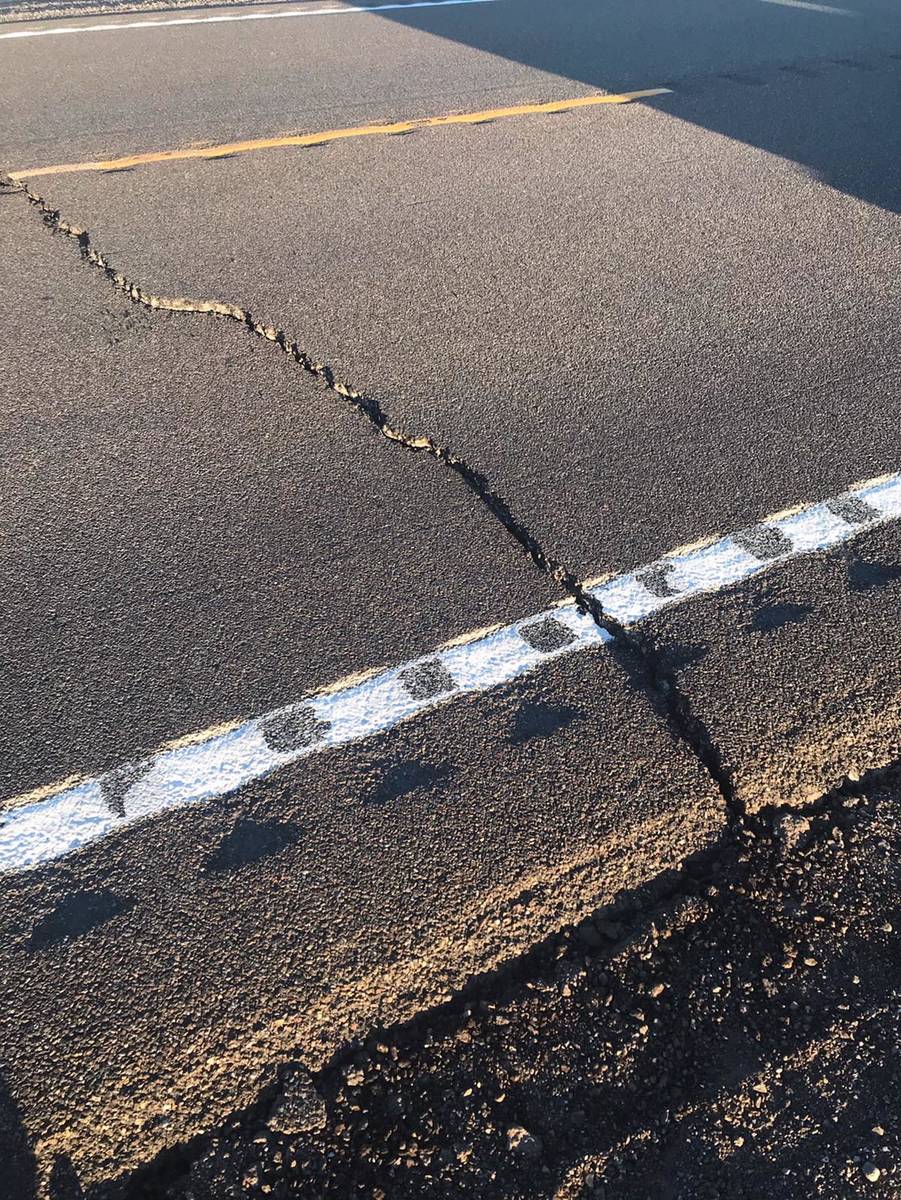 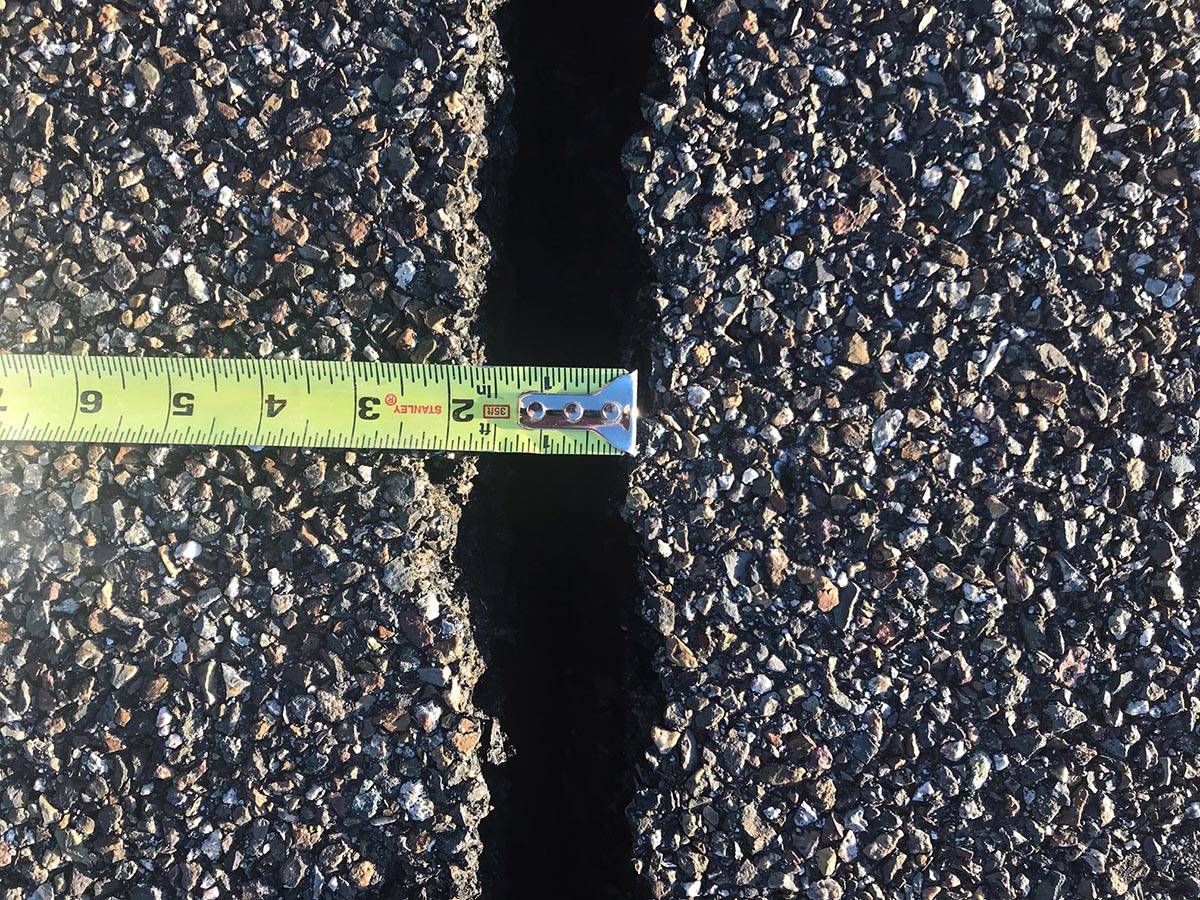 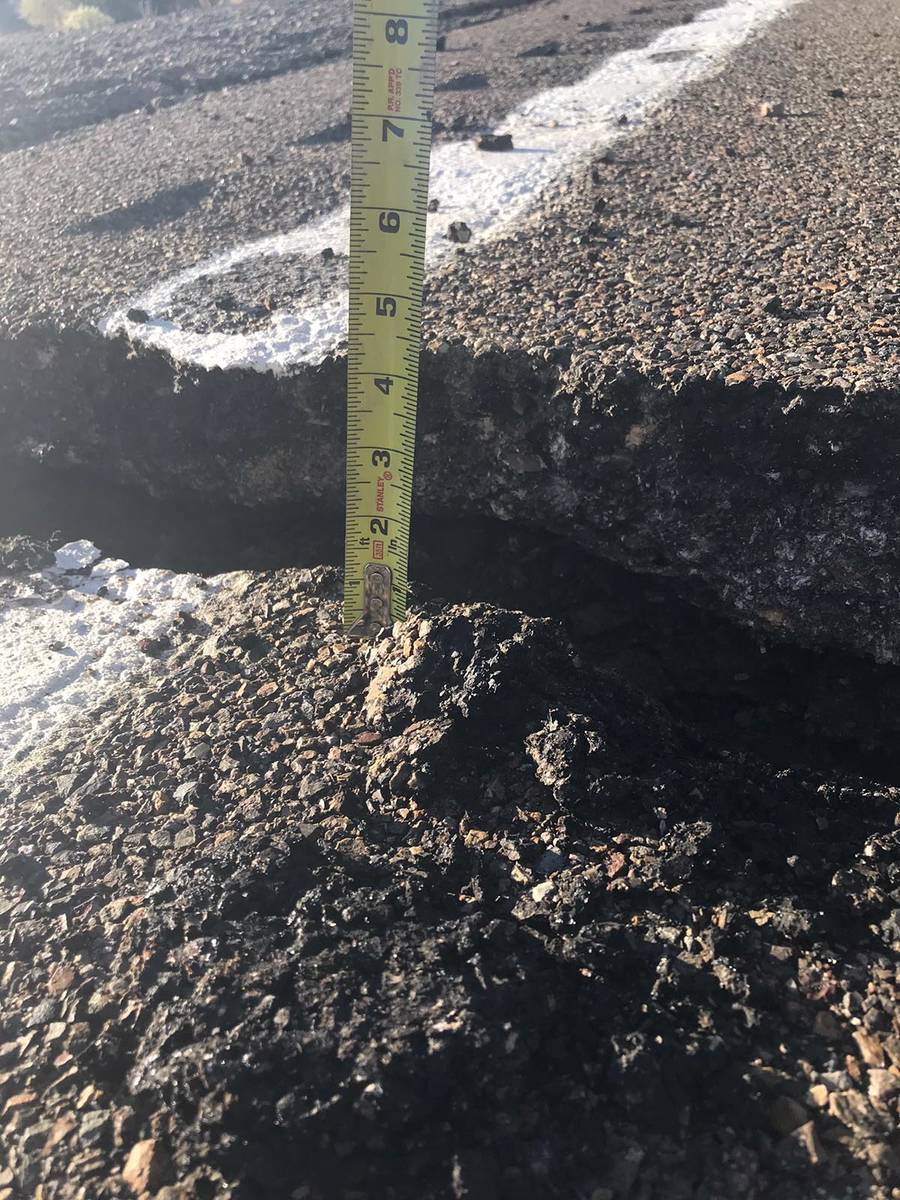 The temblor, which was originally classified as magnitude 6.4 but later upgraded by the U.S. Geological Survey, was reported at 4:03 a.m. about 35 miles west of Tonopah, near Coaldale.

The quake’s depth was estimated to be 4.7 miles.

Four sections of U.S. 95 in Esmeralda, Mineral and Nye counties — including a half-mile section north of the U.S. Highway 6 junction in Tonopah — were damaged, forcing travelers to make lengthy detours before the highway was repaired and reopened at 2:05 p.m., according to a statement from the Nevada Department of Transportation.

The largest repair entailed a 9-foot-wide-by-40-foot-long pavement patch. Permanent repairs will be scheduled in the future, although it’s too early yet to determine the cost and timeline.

Photos from Esmeralda County showed a crack several inches wide running through both lanes of the highway.

“We’ve got a lot of calls from frightened residents, but none of them report any damage,” he said.

“A cursory windshield survey discovered some broken windows in Tonopah,” Wehrly said. “Patrol officers were sent north due to a report of damage to Highway 95 and possible damage in Gabbs.”

The sheriff’s office said it would provide additional updates if more damage is discovered. Nye County spokesman Arnold Knightly said that as of midmorning, there had been 23 magnitude 3 or higher aftershocks following the initial quake. One aftershock was listed as magnitude 5.

“Over the next week, there is a 4 percent chance of one or more aftershocks that are larger than 6.5,” Knightly said. “It is likely that there will be smaller earthquakes over the next week with 3 magnitudes or higher.”

“There are reports of broken storefront glass, stress cracks on asphalt streets, loose hanging signs, items knocked off shelves and some minor lifting of sidewalks,” Knightly said. “Overall, everything appears to be sound at this point; however, we have learned that other than obvious earthquake damage, some damage is discovered later.”

He said there were no reports of significant damage in Gabbs, which is about 75 miles north of Tonopah.

Groceries off the shelves in Tonopah

Keith Hasty works at the Super 7 gas station on Main Street in Tonopah. He said the earthquake shook the store and rattled nerves but caused no major damage that he knew of.

“It really shook a lot of groceries off the shelves,” Hasty said.

He said he was working since midnight and, after the quake struck, local residents who frequented the store were all talking about the quake.

“We have a lot of locals coming in saying their TVs were shaking, they felt it,” Hasty said.

Tonopah resident Susan Jesionowski said she woke up to find her 120-year-old house shaking from the earthquake.

“I live in a house behind the post office and my whole house shaked, rattled and rolled,” Jesionowski said. “The whole entire house was just rolling. I had canned goods go everywhere.”

Some people reported on social media that they felt the earthquake in Las Vegas, San Francisco and Utah.