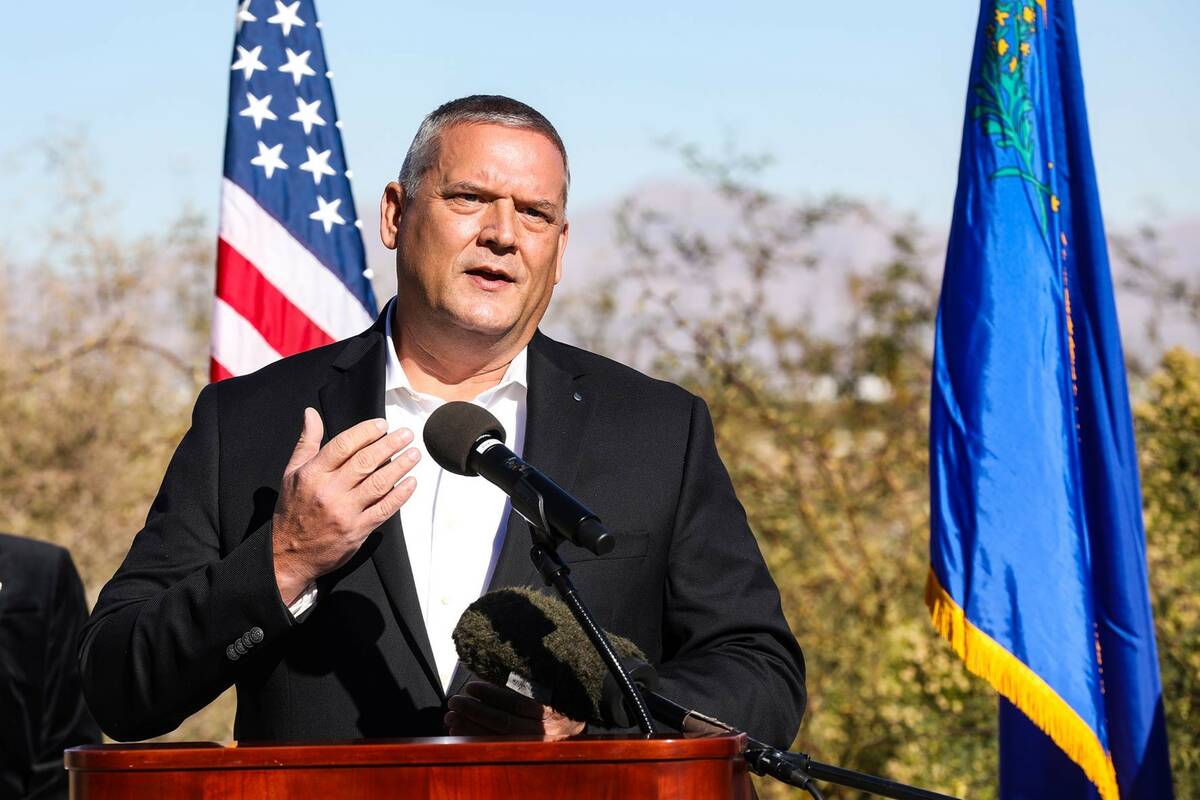 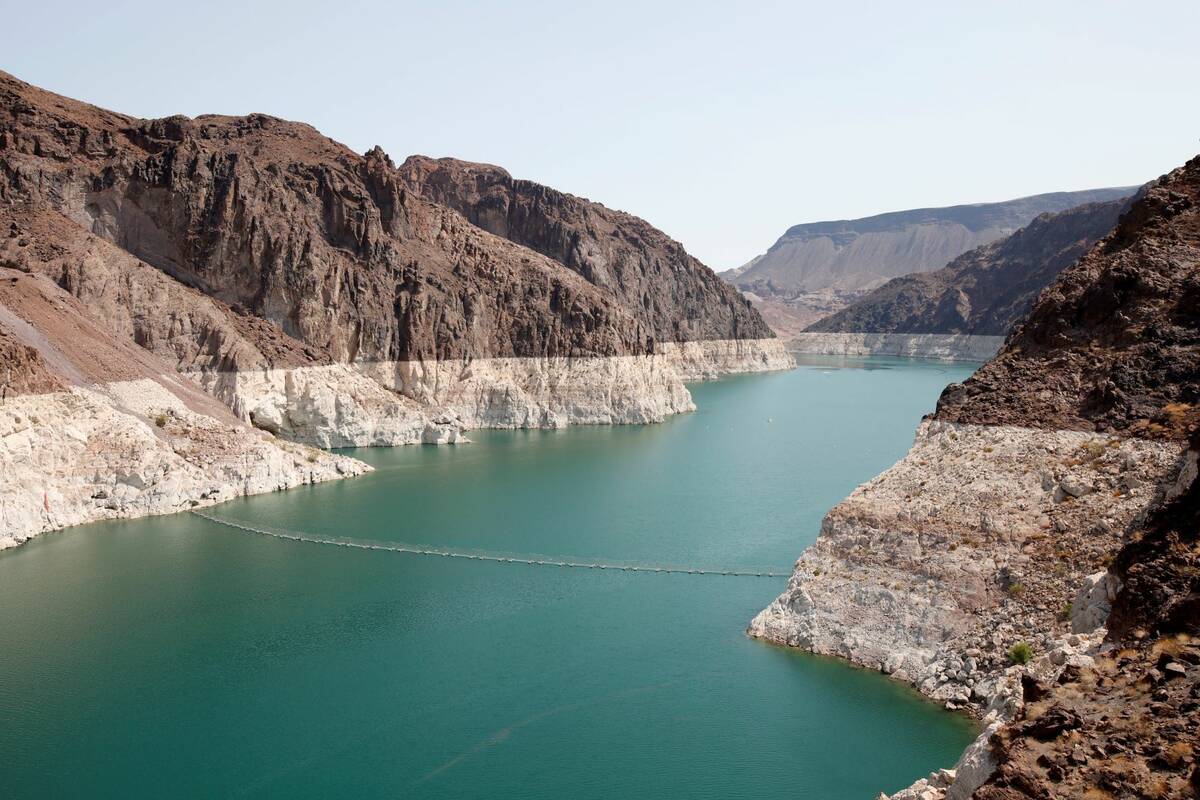 A “bathtub ring” in July 2021 shows what once was the water level on Lake Mead. (Chitose Suzuki / Las Vegas Review-Journal)

On one side, he has to explain the seriousness of a shrinking Colorado River to climate change skeptics and people who are content with not immediately handling the West’s water woes.

On the other, he has to quell concerns of crisis on a river that supplies water to 40 million people in the U.S. and Mexico.

“That’s a delicate balance,” he said.

Entsminger, who became general manager of the Southern Nevada Water Authority in 2014, has the responsibility of leading the agency that distributes the area’s share of the West’s most precious resource.

The situation is serious, he said, but the tools exist to move forward, and Southern Nevada is well-positioned to avoid the worst effects of a two-decade drought and overuse of the river.

Career on the river

Entsminger grew up in a family that spent time in the outdoors fishing the tributaries of the river in Colorado.

“In a way, I loved the river without ever knowing I would actually work on the issues affecting the river,” he said.

The summer before law school, Entsminger read a book on Western water law that revealed the potential for a career in answering the water supply question.

He began his career at the Southern Nevada Water Authority in 1999 after attending law school at the University of Colorado, Boulder. At the time, he thought it was a good opportunity to start building a résumé.

He started as a staff attorney dealing with open meeting law, public records and small-scale lawsuits. In 2002, he was tapped to work on Colorado River negotiations.

Two years later, he joined the negotiating team for a set of management guidelines that govern how water use is cut along the river.

“So that was my first real exposure to working the front lines of the Colorado River,” he said.

He has since led Nevada in negotiations on agreements with Mexico and helped get a set of guidelines called the Drought Contingency Plan that sought to slash water use and manage reservoir levels in the Colorado River system across the finish line in 2019.

If the agreements over the past couple of decades hadn’t come to fruition, Lake Mead would be 50 feet lower than it is today.

Entsminger has built a reputation as a strong advocate for the needs of Southern Nevada who also tries to work with others.

“John, I believe, is one of the driving forces in collaborative outcomes among the basin states, with the federal government and with Mexico,” said Tom Buschatzke, director of the Arizona Department of Water Resources.

When negotiations for what would become the 2019 Drought Contingency Plan languished, Entsminger was a staunch supporter who publicly pressed to ensure it was finalized.

He’s a deft diplomat behind the scenes, Buschatzke said, spending time chatting one-on-one or in small groups with other officials when not at the negotiating table.

“He’s an honest broker,” Kightlinger said. “He’s not trying to leverage up to get something extra for Nevada. He’s very clear what his goals are for Nevada.”

Kightlinger said Nevada has an important leadership position in the lower basin because it can mediate between two states — California and Arizona — that have often been at odds.

“And John has filled that role very well, becoming sort of a leader and a voice and a trusted voice” that other states don’t feel threatened by, he said.

But Entsminger’s agency hasn’t been without its critics. One of the most vocal has been Kyle Roerink, executive director of the Great Basin Water Network.

Roerink was part of a broad coalition that opposed a now-shelved water authority plan to pipe groundwater from rural Nevada into Las Vegas. He’s also criticized Entsminger’s agency for running ranching operations in the eastern part of the state, ranches that were purchased for access to their water rights.

Despite their disagreements, Roerink said Entsminger is a man of integrity and one of the top government leaders and thinkers on the Colorado River.

“He’s coming at it with a level of honesty, where a lot of water buffaloes over the years haven’t gone there,” Roerink said.

How we got here

How Lake Mead got to its lowest levels in history — enough to trigger a water shortage — isn’t a mystery. Part of it is basic math.

Historically, the lower basin has used more water than has been released to Lake Mead by the upper basin, largely because there is no agreement between the lower basin states on how to cut allocations to account for evaporation.

Couple that with decades of unfavorable hydrology, and Lake Mead begins to decline.

But Southern Nevada has lived within its means in recent decades, using less than its legal entitlement of water every year since 2002, Entsminger said.

Entsminger said he wishes water use had been brought into balance with the river’s flows sooner, but he’s part of a generation of water managers that has addressed the deficit.

He said agreements that have been signed since 2007 seek to create an equilibrium. Lower basin states last week signed a new deal with the federal government that will conserve water beyond those existing agreements to protect Lake Mead from crashing to critical levels.

Entsminger doesn’t think the Colorado River is in a crisis, but it is out of easy solutions.

If the river experiences two more years of hydrology like what it just experienced, it could become a question of how much water the federal government will be able to send downstream from the Glen Canyon Dam, he said.

But even in that case, Entsminger doesn’t see a crisis on the horizon for Southern Nevada.

“And that’s because we’ve essentially immunized ourself from that by the construction of new infrastructure on the shore of Lake Mead,” he said.

About $1.5 billion in local money has gone to ensuring Las Vegas can pump water from Lake Mead, even when the federal government can’t send it downstream to others.

Entsminger said he thinks Southern Nevada is “the most water-secure municipal area in the Colorado River Basin.”

Sustainability in the basin depends on agricultural efficiencies, he said. Locally, Entsminger continues to push for conservation as a way out of a dire situation.

Growth in Las Vegas is possible, he said, but it requires driving down existing water demands and tightly controlling new demands, something he said Southern Nevada has a track record of doing successfully.

One method of meeting conservation goals is through a law signed this year that bans nonfunctional grass in coming years. Another is increased enforcement of compliance with seasonal watering restrictions.

Those measures will be able to save about 15 percent of Southern Nevada’s allocation of Colorado River water under a nonshortage year and help provide the water for additional growth.