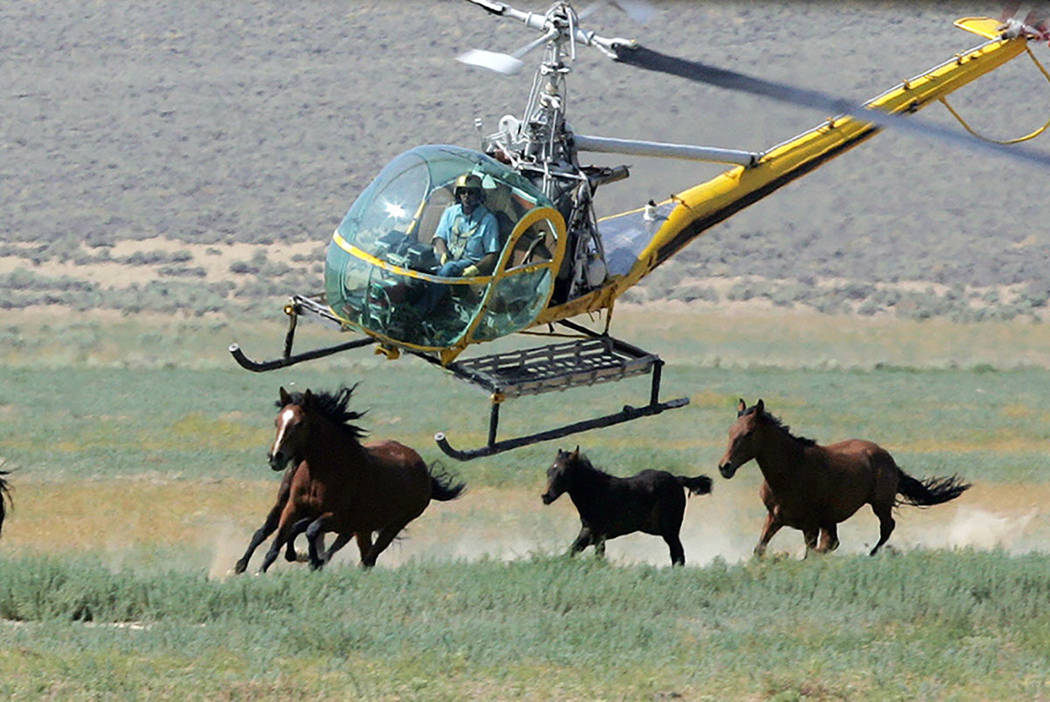 A livestock helicopter pilot rounds up wild horses from the Fox & Lake Herd Management Area from the range in Washoe County in 2008. (AP Photo/Brad Horn, File) 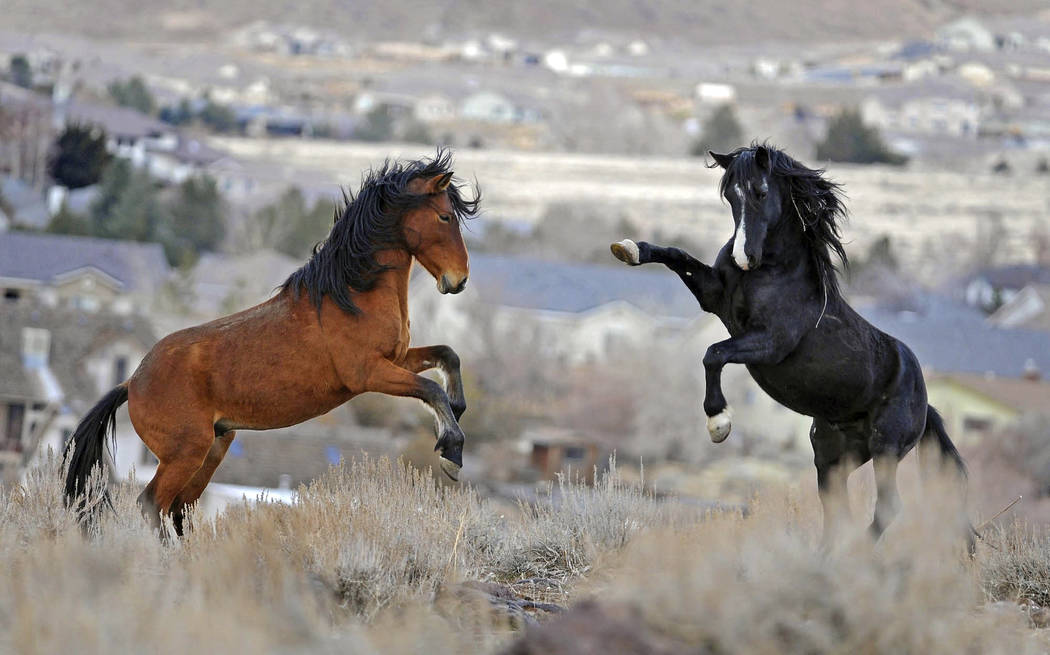 PALOMINO VALLEY — President Donald Trump’s budget proposal calls for saving $10 million next year by selling wild horses captured throughout the U.S. West without the requirement that buyers guarantee the animals won’t be resold for slaughter.

Wild-horse advocates say the change would gut nearly a half-century of protection for an icon of the American West and could send thousands of free-roaming mustangs to foreign slaughterhouses for processing as food.

They say the Trump administration is kowtowing to livestock interests who don’t want the region’s estimated 59,000 mustangs competing for precious forage across more than 40,000 square miles of rangeland in 10 states managed by the U.S. Bureau of Land Management.

The budget proposal marks the latest skirmish in the decades-old controversy pitting ranchers and rural communities against groups that want to protect the horses from Colorado to California.

“This is simply a way to placate a very well-funded and vocal livestock lobby,” Laura Leigh, president of the nonprofit protection group Wild Horse Education, said about the plan.

The National Cattlemen’s Beef Association and other interests have been urging the BLM for years to allow sales of wild horses for slaughter to free up room in overcrowded government corrals for the capture of more animals.

Doug Busselman, executive vice president of the Nevada Farm Bureau, blamed the stalemate on the “emotional and anti-management interests who have built their business models on preventing rational and responsible actions while enhancing their fundraising through misinformation.”

Presidents George W. Bush, Bill Clinton and Barack Obama also grappled with the spiraling costs of managing the nearly 60,000 horses on the range and 45,000 others in U.S. holding pens and contracted private pastures.

Trump’s proposal anticipates the $10 million savings would come through a reduction in the cost of containing and feeding the animals. The savings also would include cutbacks involving roundups and contraception programs.

The 1971 Wild Free-Roaming Horse and Burro Act allows older, unadoptable animals to be sold. But for years, Congress has approved budget language specifically outlawing the sale of any wild horses for slaughter.

Horse slaughterhouses are prohibited in the U.S. but legal in many other countries, including Canada, Mexico and parts of Europe where horse meat is considered a delicacy.

A year ago, then-BLM Director Neil Kornze said the horses represented a $1 billion budget problem for his agency because it costs $50 million to round up and house every 10,000 horses over their lifetime.

Still, he said the agency had no intention of reversing the long-standing policy.

The Trump administration wants a change, saying through the BLM that the “program is unsustainable and a new approach is needed, particularly when overall federal funding is so constrained.”

It says the budget would allow the agency to manage the wild-horse program in a more cost-effective manner, “including the ability to conduct sales without limitation.”

The BLM rounded up more than 7,000 horses in 2012, but only about 3,000 in each of the past two years due primarily to budget constraints.

As of March, the BLM estimated that more than half the horses roaming the range — 34,780 — were in Nevada. An additional 13,191 burros were on the range — about half in Arizona.

The BLM asserts that U.S. rangeland can sustain fewer than 27,000 horses and burros.

“The original intent of the act was to make sure those animals had a healthy presence on the range, but also that they be kept at a number that is sustainable,” said Ethan Lane, executive director of the National Cattlemen’s public lands council. “You have horses starving to death … and irreversible damage to Western rangelands.”

The American Society for the Prevention of Cruelty to Animals said Trump’s budget proposal was shocking.

“Wild horses can and should be humanely managed on-range using simple fertility control, yet the BLM would rather make these innocent animals pay for draconian budget cuts with their very lives,” ASPCA President Matt Bershadker said.

Suzanne Roy, executive director of the American Wild Horse Campaign, said the plan could put the horses on the brink of extinction.

“America can’t be great if these national symbols of freedom are destroyed,” she said.