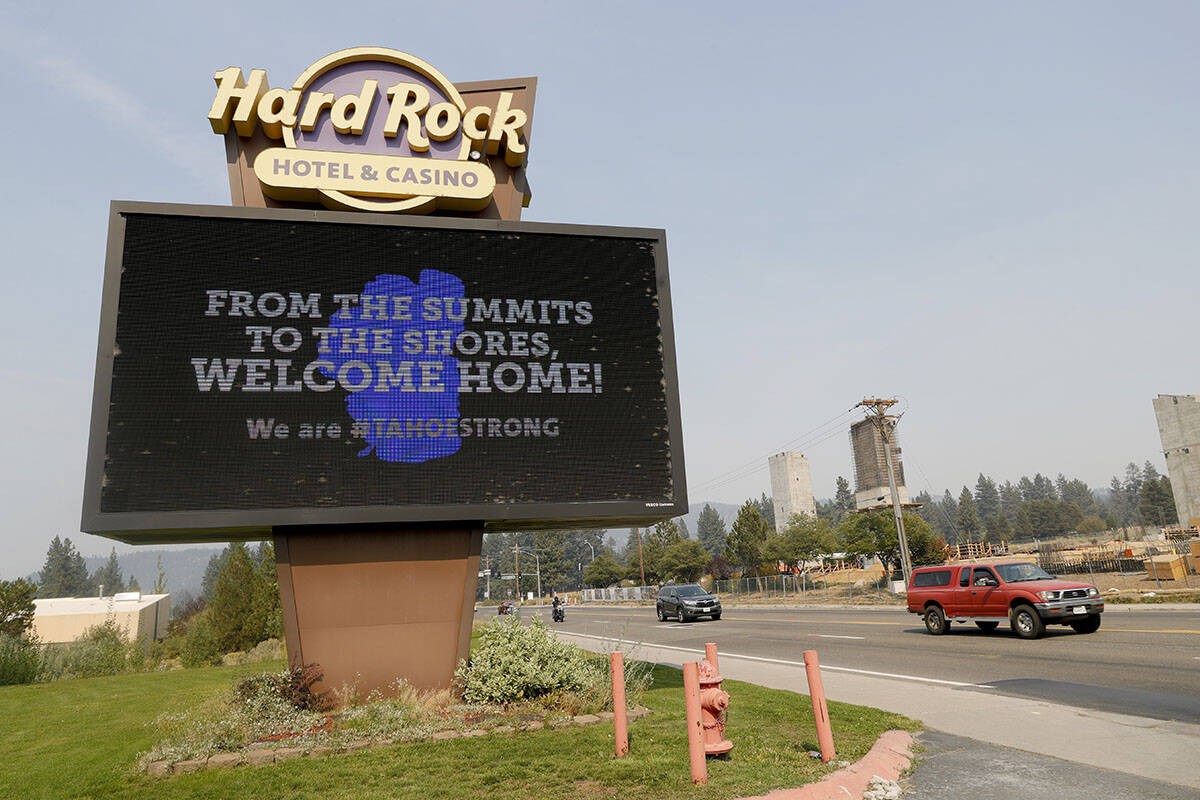 A welcome home sign is seen at the Hard Rock Hotel & Casino Highway 50 near Stateline, Nev., on Monday, Sept. 6, 2021. The hotel is being used by firefighters and other first responders working the Caldor Fire. (Jane Tyska/Bay Area News Group via AP) 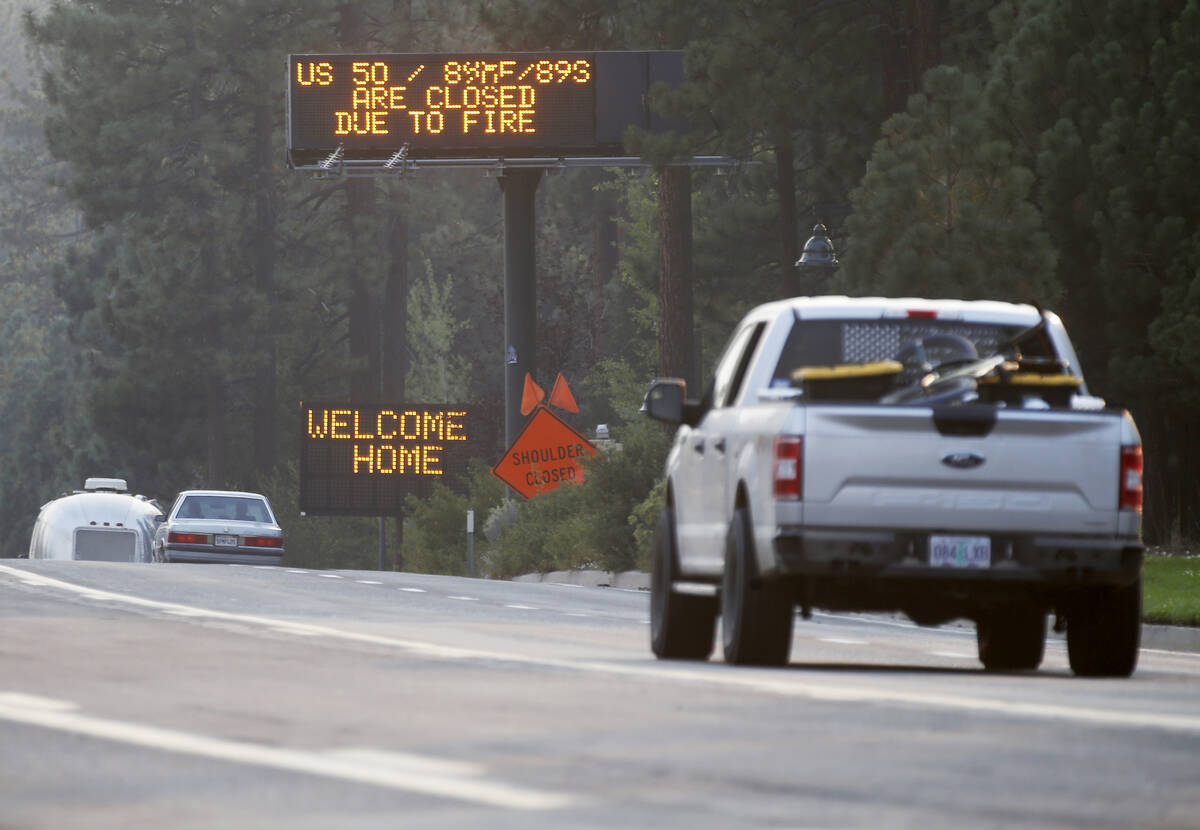 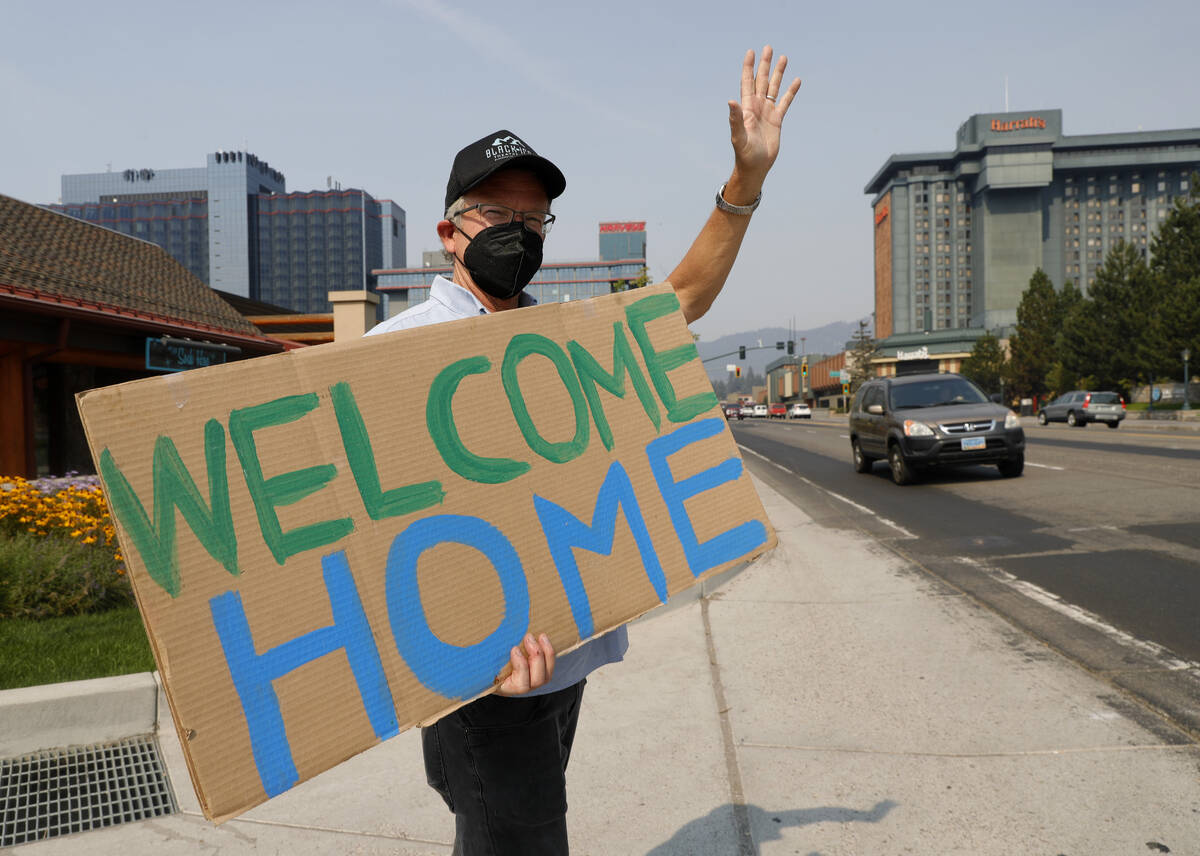 South Lake Tahoe Council member John Friedrich waves to passing cars as they honk their horns along Highway 50 near Stateline, Nev., in South Lake Tahoe, Calif., on Monday, Sept. 6, 2021. Friedrich was one of many residents who evacuated due to the Caldor Fire and just returned the day before. (Jane Tyska/Bay Area News Group via AP) 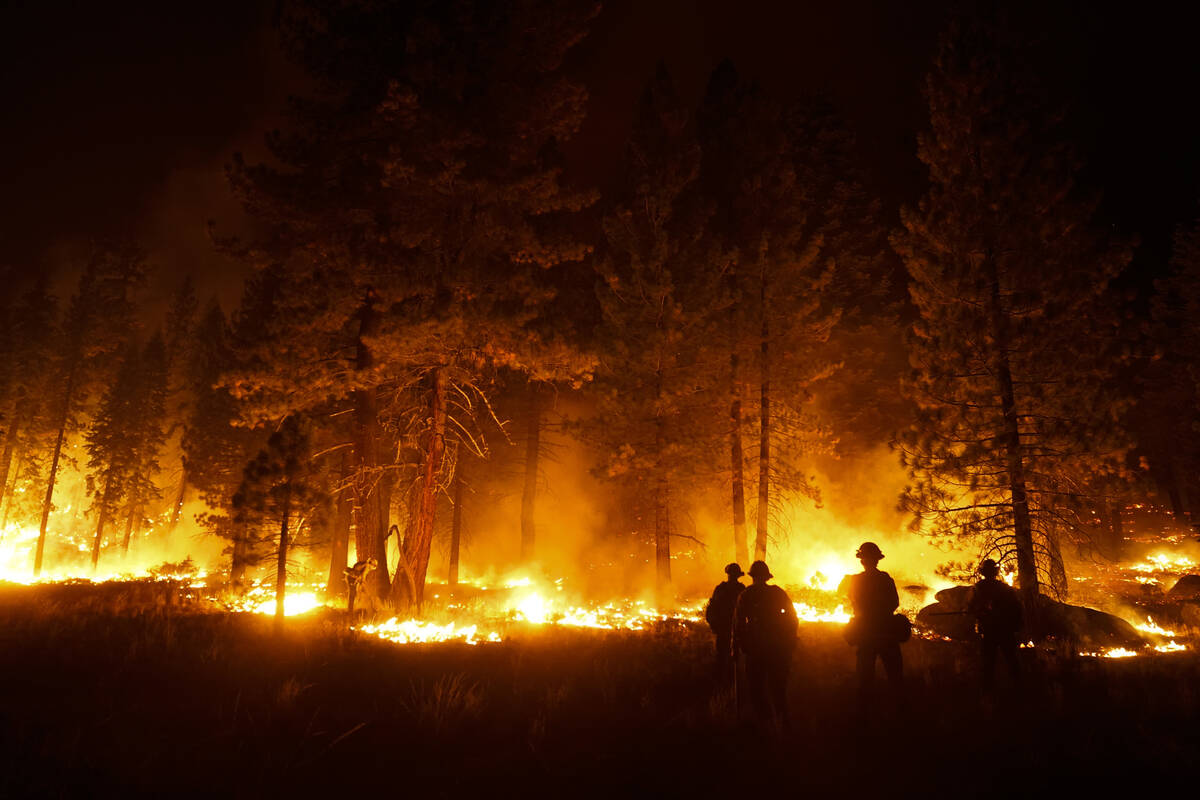 FILE - In this Sept. 1, 2021, file photo, a firefighter lights a backfire to stop the Caldor Fire from spreading near South Lake Tahoe, Calif. An unidentified firefighter has died of an illness while assigned to one of California's largest wildfires, authorities said Sunday, Sept. 5, 2021, marking the first death in a season that has seen blazes destroy thousands of buildings and force entire towns to flee. Edwin Zuniga with the California Department of Forestry and Fire Protection said he couldn't provide other details on the death. (AP Photo/Jae C. Hong, File) 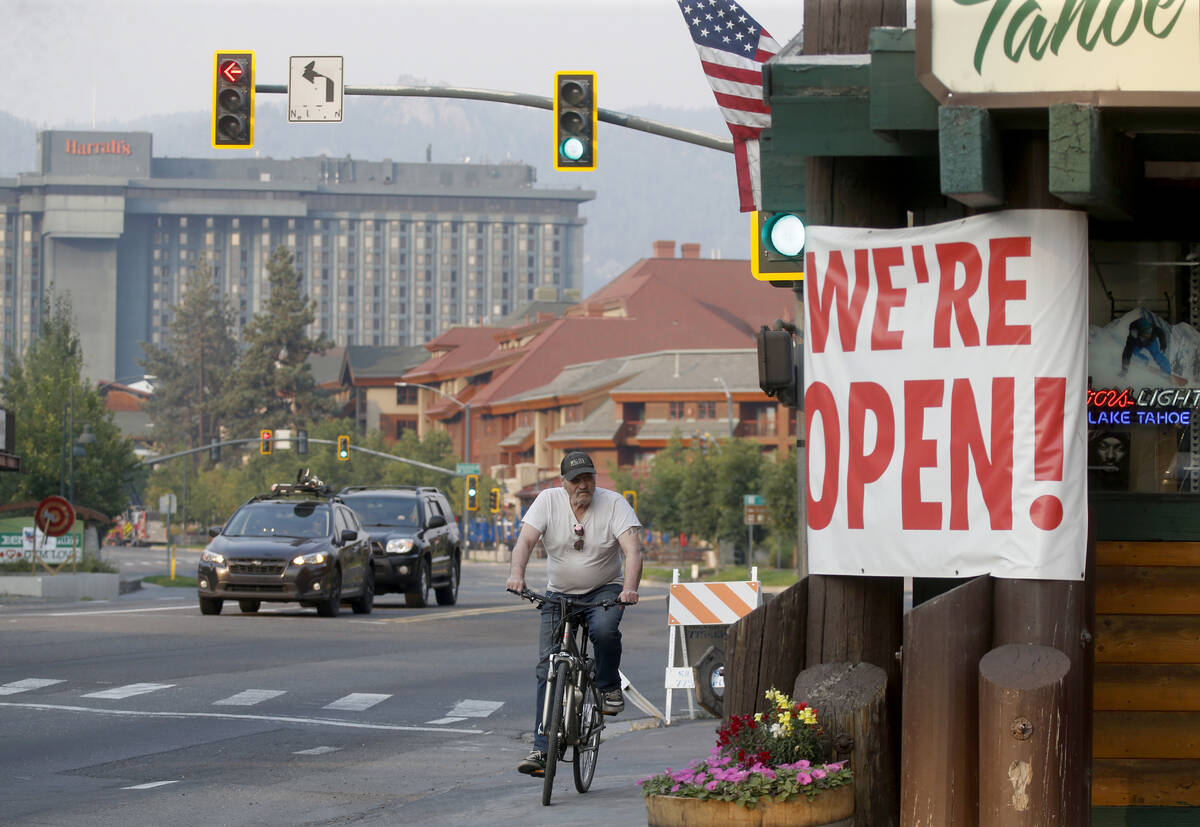 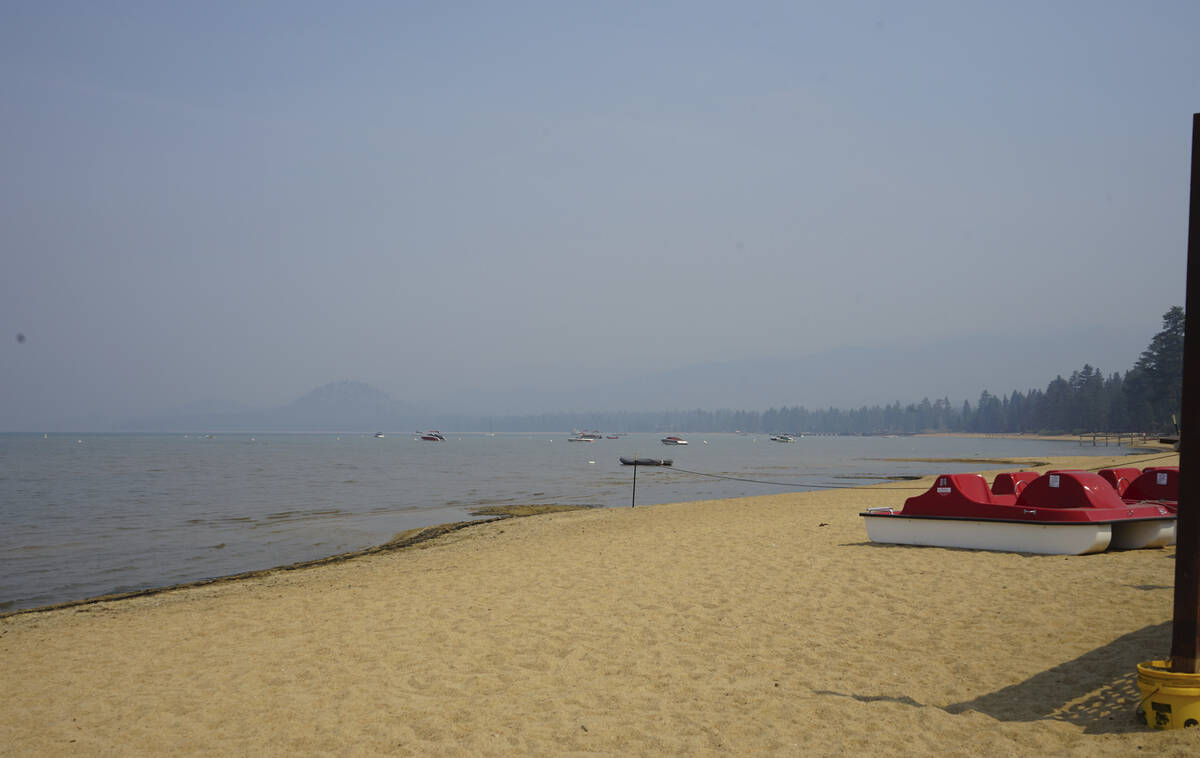 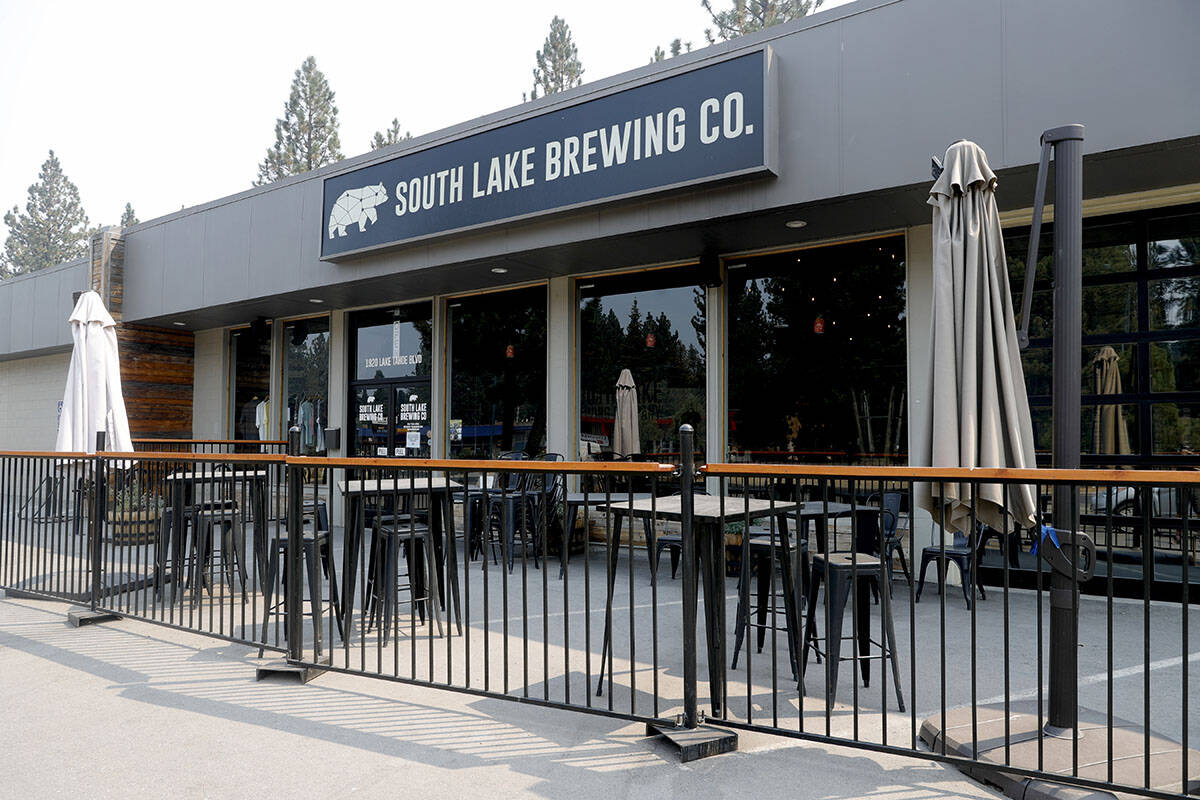 The South Lake Brewing Company is seen in South Lake Tahoe, Calif., Monday, Sept. 6, 2021. Residents who evacuated due to the Caldor Fire returned the day before and the brewery remains closed. (Jane Tyska/Bay Area News Group via AP)

SOUTH LAKE TAHOE, Calif. — The huge California wildfire near the Lake Tahoe resort region was 49% contained Tuesday and leaders of the firefighting army that has battled the flames for 3½ weeks were increasingly positive in their outlook.

The Caldor Fire grew by just a few hundred acres over 24 hours to just over 338 square miles (875 square kilometers) and containment lines were holding well, officials told a morning briefing of firefighters.

“We had very little challenging of the line anyplace on the fire,” said Tim Ernst, an operations section chief.

Some sections of the perimeter remained a concern but on much of the rest of the fire the work turned to mopping up, pulling miles of fire hose out of the forest and felling dangerously weakened trees.

The fire, which has grown explosively at times, was tamed sufficiently to allow authorities to lift mandatory evacuation orders for the city of South Lake Tahoe’s 22,000 residents on Sunday.

The Caldor Fire broke out Aug. 14 in El Dorado County on the western slope of the Sierra Nevada and gutted the community of Grizzly Flat as it roared up and over the crest of the mountain range to the eastern side, burning more homes and cabins along the way until it was prevented from reaching Lake Tahoe’s south shore.

The fire has been “one of the most impactful events that I think we’ve ever seen here,” said Mike Blankenheim, chief of the Amador-El Dorado unit of the California Department of Forestry and Fire Protection, or Cal Fire.

“The road back to some sense of normalcy for us is no doubt going to be long and no doubt going to have some challenges with it, but because of the efforts of this group here … that path has a solid anchor point and we have a direction to go with that right now,” Blankenheim told firefighters.

California has experienced increasingly larger and deadlier wildfires in recent years as climate change has made the West much warmer and drier over the past 30 years. Scientists have said weather will continue to be more extreme and wildfires more frequent, destructive and unpredictable.

More than 15,500 personnel were working Tuesday on 14 active large wildfires in California, where more than 2 million acres (3,125 square miles, 8,094 square kilometers) have been scorched so far this year, Cal Fire said.

In the northern Sierra-southern Cascades region, the state’s second-largest fire on record was 59% contained. The Dixie Fire began in mid-July and has charred nearly 1,434 square miles (3,714 square kilometers) — an area larger than Rhode Island — destroying more than 1,200 buildings including 688 single-family homes.