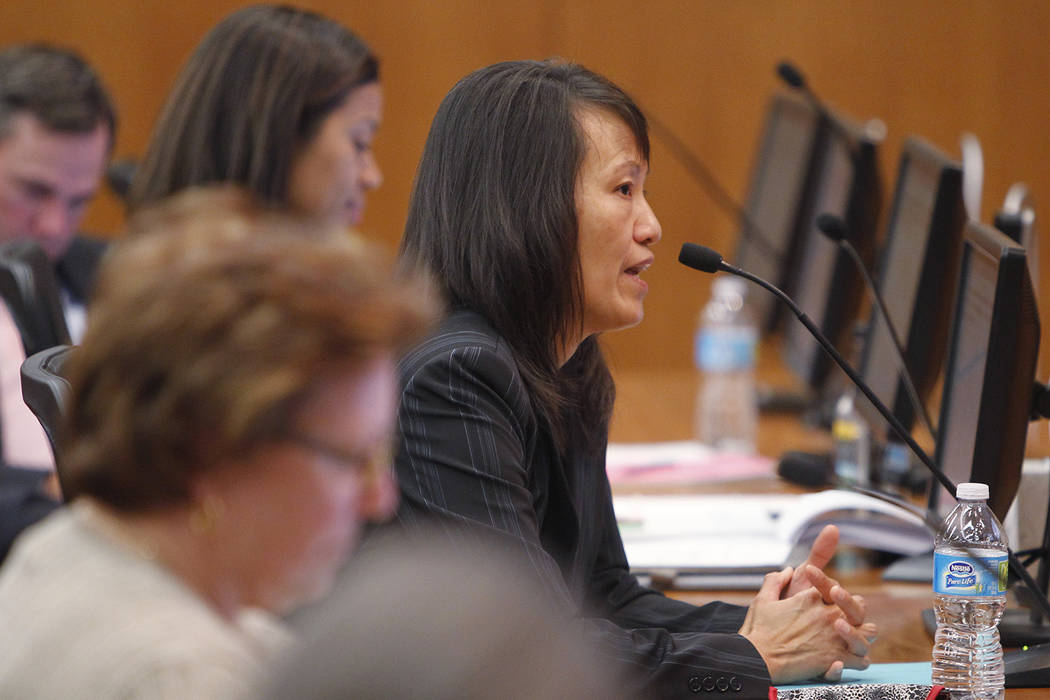 As she heads into a public hearing on Wednesday to explain her version of events, former North Las Vegas city manager Qiong Liu again said she was fired over a “personal vendetta” for trying to terminate the employment of a close associate of Mayor John Lee.

Liu also said an attempt to grant herself a $30,000 retroactive pay raise “does not appear to be wise,” according to a five-page letter delivered Thursday to the North Las Vegas City Council.

The letter lays out her version of events leading up to her departure from City Hall on Jan. 10 following an argument with Assistant City Manager Ryann Juden, who is now serving as interim city manager.

The North Las Vegas City Council voted 4-1 on Feb. 7 to fire the city manager “for cause” and rejected a proposed $613,000 severance package. Liu is scheduled to appeal the decision during a public hearing set for 6 p.m. Wednesday at City Hall.

“Staff’s pursuit of my termination for cause appears to me to be a personal vendetta to punish me for firing Mr. Juden, who now holds my job as city manager, and to deprive me of the severance I am entitled to under my employment contract as well as what was agreed to by the city just a month ago,” Liu wrote in the letter, provided to the Review-Journal by her attorney.

Liu said Juden was “demanding and aggressive” and ordered her to resign during a meeting that was meant to resolve their differences on Jan. 8.

Liu said that Lee also asked for her resignation, but said she was urged to stay on board by three other City Council members.

Liu wrote that she decided to terminate Juden, “however challenging it might be to face the consequences of working against Mayor Lee’s wish for Mr. Juden to replace me.”

In her letter, Liu also said she volunteered to defer a pay raise raise to 2016, anticipating that it would be retroactive to November 2015. Liu has also said she believed the $30,000 raise awarded in September 2016 included retroactive payments, but she didn’t catch the “administrative error” until October 2017.

Liu said she filed internal paperwork on Jan. 4 so that the pay raise could be “processed administratively.” If Liu had succeeded, then the $30,000 retroactive raise would have been prorated to run from November 2015 to September 2016, city officials said.

Liu wrote on Thursday that in retrospect she forgot about a freeze on pay raises that she had ordered for non-union city employees in 2015.

“Looking back, the approach I took to correct the administrative error does not appear to be wise,” Liu said, adding that her actions should not be categorized as fraud or a breach of her employment contract.

“It is irresponsible for staff to exaggerate a miscommunication issue into a ‘cause’ for termination,” she wrote. “After all, this was and is the pay I am entitled to under my employment contract.”

Documents obtained earlier this week by the Review-Journal confirmed that an FBI agent visited North Las Vegas City Hall at least twice to look into the allegations against Liu.

The report, completed for $10,100 by the law firm of Fisher Phillips, found Liu’s actions to be “inconsistent” with her belief that was was granted a $30,000 retroactive pay raise in September 2016.