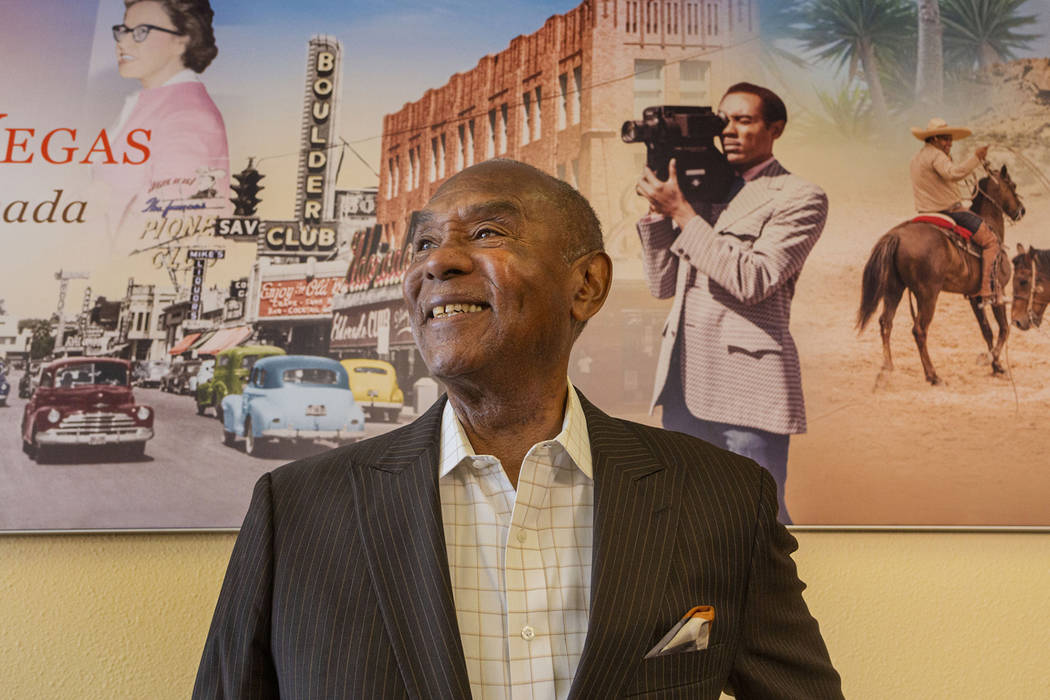 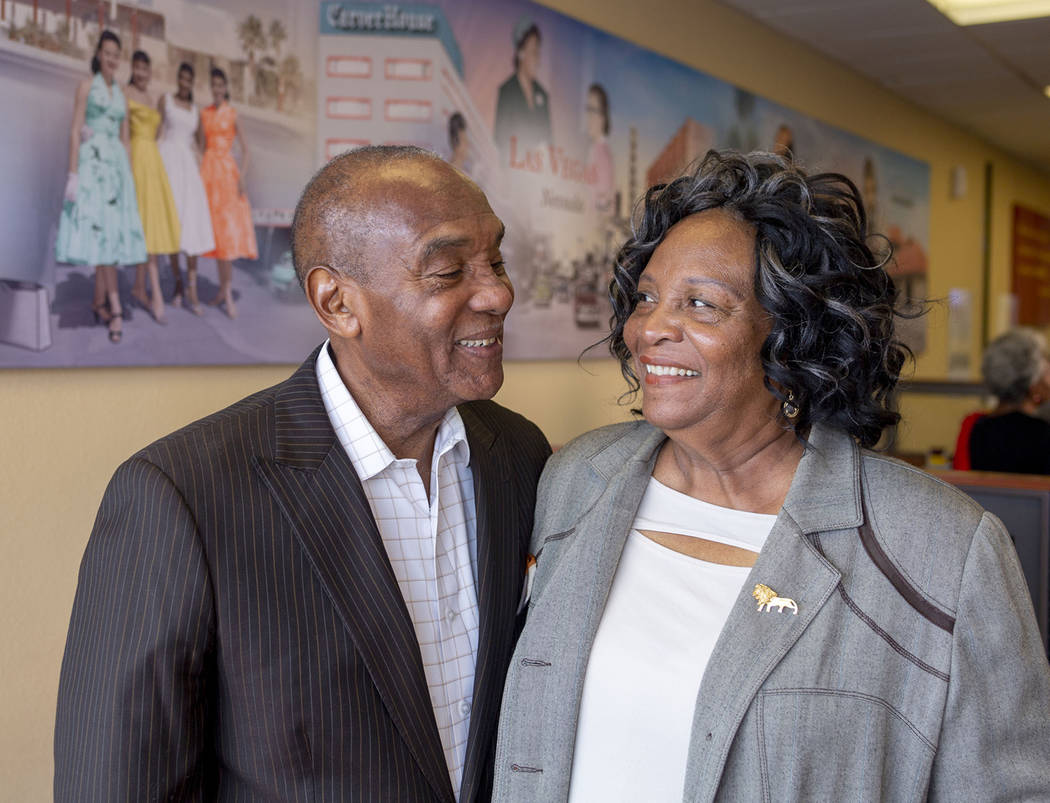 Roosevelt Toston, 77, the first African American anchor in Las Vegas, left, and Gertrude Toston, 72, celebrate his accomplishments while being honored at the Wells Fargo West Owens branch in Las Vegas on Tuesday, Nov. 19, 2019. Toston's image of his work as a camera man is displayed at the Wells Fargo along with other influential African Americans of Las Vegas. (Elizabeth Page Brumley/Las Vegas Review-Journal @EliPagePhoto) 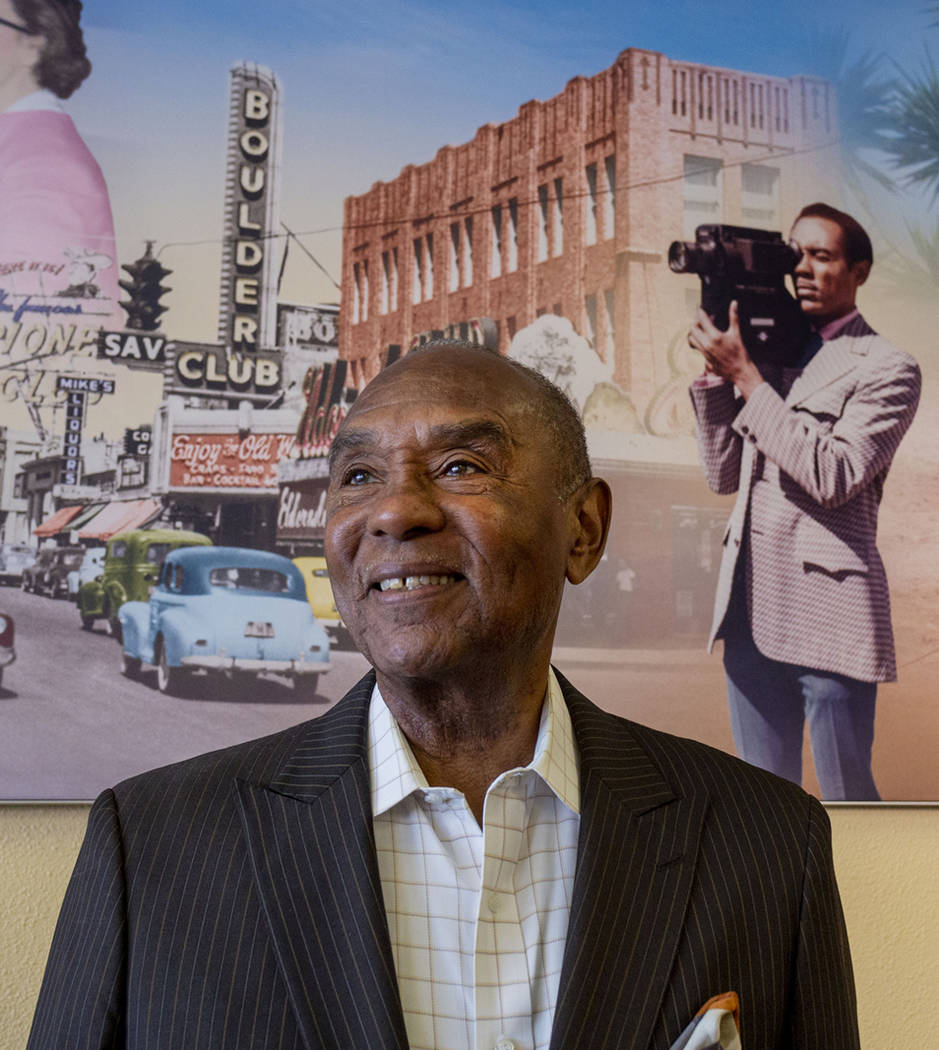 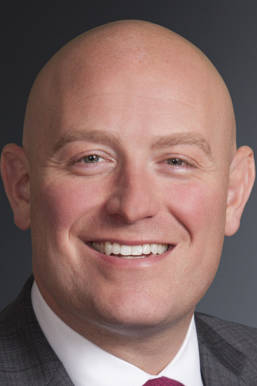 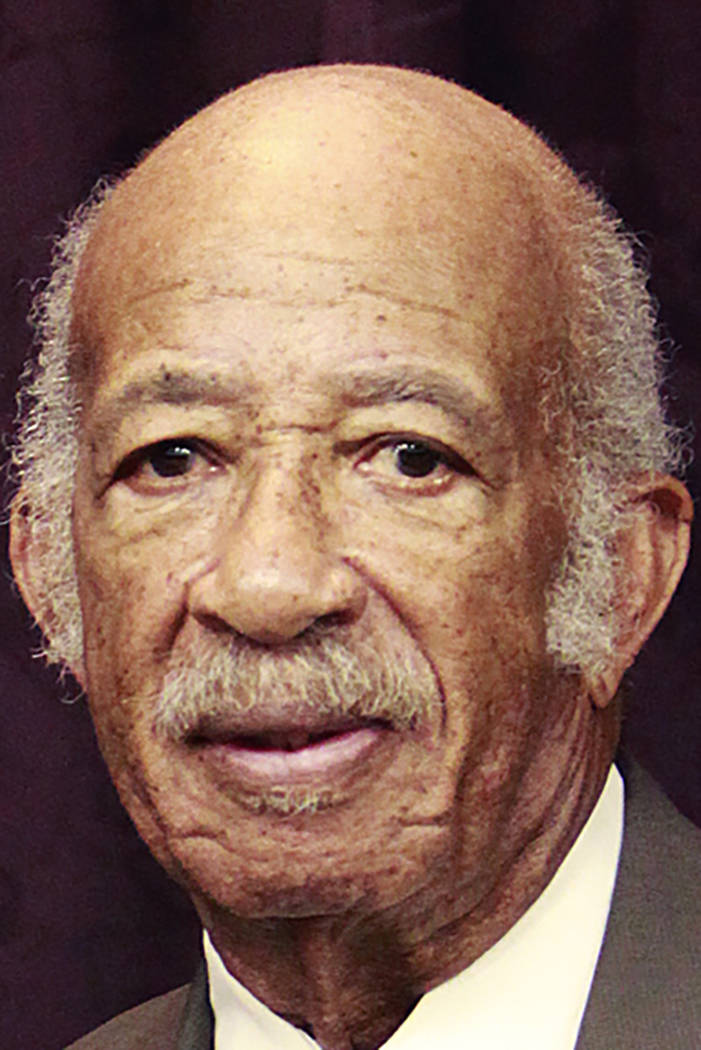 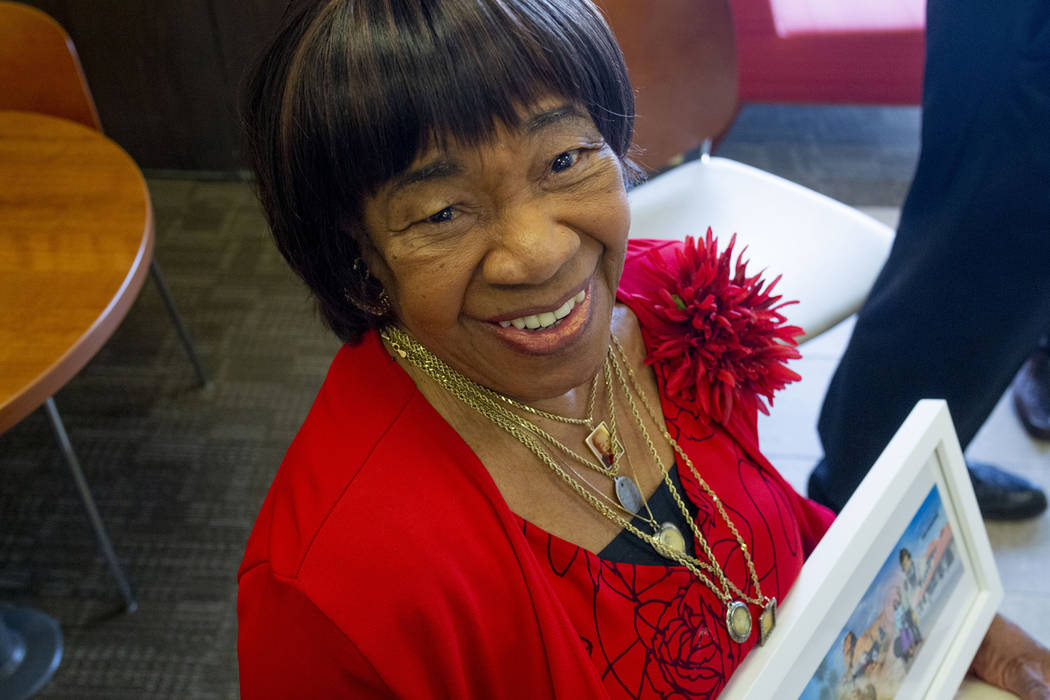 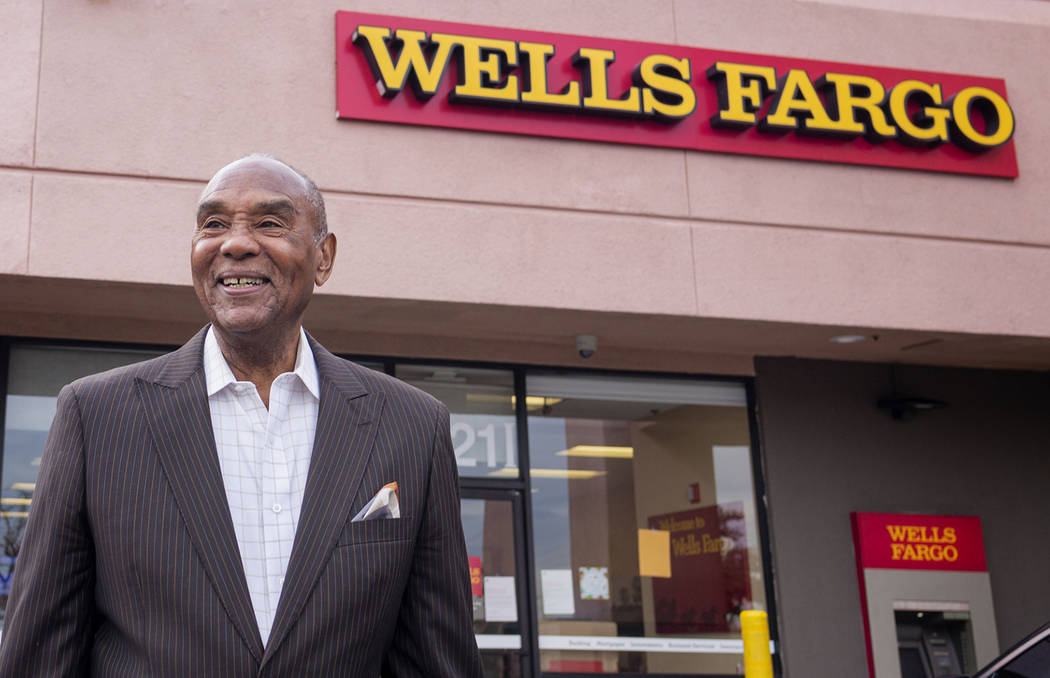 When Roosevelt Toston took his first broadcasting class, he was told he “didn’t have the right stuff.” Years later, he became familiar to Las Vegas Valley viewers as the region’s first black anchor on television.

The son of a sharecropper, Toston spent five years of his childhood in the 1950s picking cotton with his siblings in a small Louisiana village with few opportunities, he said. Following his five-year career in broadcast journalism, Toston worked for the Las Vegas Convention and Visitors Authority for 28 years, retiring in 2004 as the manager of diversity marketing.

At LVCVA, Toston worked in several positions — primarily in the marketing department — promoting Las Vegas as a premier vacation destination.

For his achievements and work in the community, Toston was honored Tuesday by staffers at a Wells Fargo bank on West Owens Avenue at H Street, in the Historic Westside neighborhood. The 77-year-old discovered a photo of his younger self — with a television camera hoisted on his shoulder — had been included in the center of a recently installed mural inside the busy bank.

The rectangular mural stretches across several desks in the Wells Fargo lobby. A sign near the entrance of the waiting line helps customers decipher who’s in the mural and the historical significance of each image.

“I hope that when people go into that bank, when they see that image — I hope it will bring a smile to their face that I was able to make the history I made in this town and be proud of the accomplishment,” he said.

In the mural, Toston’s photo lies next to that of another local icon, former North Las Vegas City Councilman Theron Goynes, who is depicted in his Air Force uniform in 1952 and was also honored at the ceremony. There are also images of performers at the Moulin Rouge, the region’s first desegregated hotel and casino, as well as civil rights workers.

Toston’s move to broadcast television reflected a trend in Las Vegas, according to Claytee White, director of oral histories at UNLV.

“Finally, employers were looking to the African American community for talent, and Roosevelt was one of those people,” she said. “It was time.”

White praised his performance and added, “Other people with skills and talents were then looked at because one person succeeded.”

As a young teen, Toston traveled over 1,500 miles from Epps, Louisiana, a village on the northeastern edge of that state, to Las Vegas — seeking employment over his summer break after his sophomore year of high school.

“I wasn’t sure how I would like it,” Toston said, adding his father had passed away shortly before he moved and his mother had died when he was a child.

A few years before the big move, his uncle had moved to Las Vegas and told his family he had a job in a hotel and didn’t have to work “chopping cotton,” Toston wrote in his memoir, “Beating the Odds in Las Vegas and in Life.” That information enticewd his older brother to move, who then asked Toston if he would like to leave Epps.

The move took 33 hours by car to his new home in the Westside neighborhood.

That summer, he worked as a dishwasher at the Fremont Hotel — which proved more financially lucrative than work in his village.

“I felt ‘safe’ in Las Vegas and thanked the Good Lord for bringing me to this destination. I had no idea of the kind of racism I would later encounter in my new home,” he continued. “I never dreamed that I was now living in a place pegged by some fifties journalists as the ‘Mississippi of the West,’” his writing continued. “In spite of the pejorative title, racism was not the written laws nor was it as violent as the South.”

Following his graduation from Las Vegas High School, Toston worked cleaning buildings, as a dishwasher and as a cashier, according to his book.

He worked his way up at a phone company and had a stable career before he stumbled on an ad that would change his life.

His career in broadcast came “by accident,” Toston said in an interview.

“I saw (a correspondence class) in a magazine and thought it would be interesting to see if I could learn to be a broadcaster,” he said, adding that the class was offered by the Career Academy of Famous Broadcasters. “It was concluded that I didn’t have the right stuff to be a broadcaster and they wished me well. I didn’t think I had a shot at that career.”

Several months later, he got a phone call from a friend about a job opportunity at Channel 3.

“(The news director) said if you can get in here by 6 p.m., I can let you in the back door. I’ve decided who I wanted to hire, but come in anyways,” Toston said, adding he was determined for a new career outside the telephone company.

“After seeing me, he said, ‘You understand broadcast and you have a flair for writing,’” Toston said.

During the second half of his five-year broadcast career, Toston worked at Channel 8, where he co-anchored the 11 p.m. news broadcast and anchored weekend broadcasts, according to his memoir.

Toston had long felt nervous around the camera. He tried hypnotism.

“I don’t think it worked, but it gave me a good sleep,” he said.

One — called “Does the Dream Come in Black?” — analyzed how black residents felt after Martin Luther King Jr. had been assassinated and how they felt about progress, Toston recalled. Then, after a “rash of killings” in the black community, he produced “Is Life Cheap in the Black Community?”

Those local documentaries — which later were lost in a fire — aired in prime time on the station.

Throughout his time in broadcast journalism, Toston said he made mistakes. Rectified by studying others, taking additional classes and learning from the mishaps.

“I was determined to not go back to my job (at a telephone company). I had to get where I needed to be,” Toston said.

Toston believes the broadcast journalism industry still has work to do in terms of its makeup of on-screen reporters.

“What I’m surprised to see in terms of African American males, there are no news reporters here in Vegas and anchoring the news. That surprises me (that) this hasn’t happened,” he said.

Low pay was one of the reasons Toston left the industry, he said.

“It was a stepping stone to a better-paying career,” he said. “It was an enjoyable experience, and it allowed me to be known by a larger segment of the community.”

It also propelled him to be in a position to work for the Las Vegas Convention and Visitors Authority.

“That exposure was one of the reasons I got the job at the Convention and Visitors Authority. It was groundbreaking,” he said. At LVCVA, he advocated for the inclusion of vacationing black people on promotional material, among other things, he said.

Toston’s advice to those eyeing a career in broadcast: prepare well.

“Love what you do, work hard at it, give it time and get trained if you can,” he said.