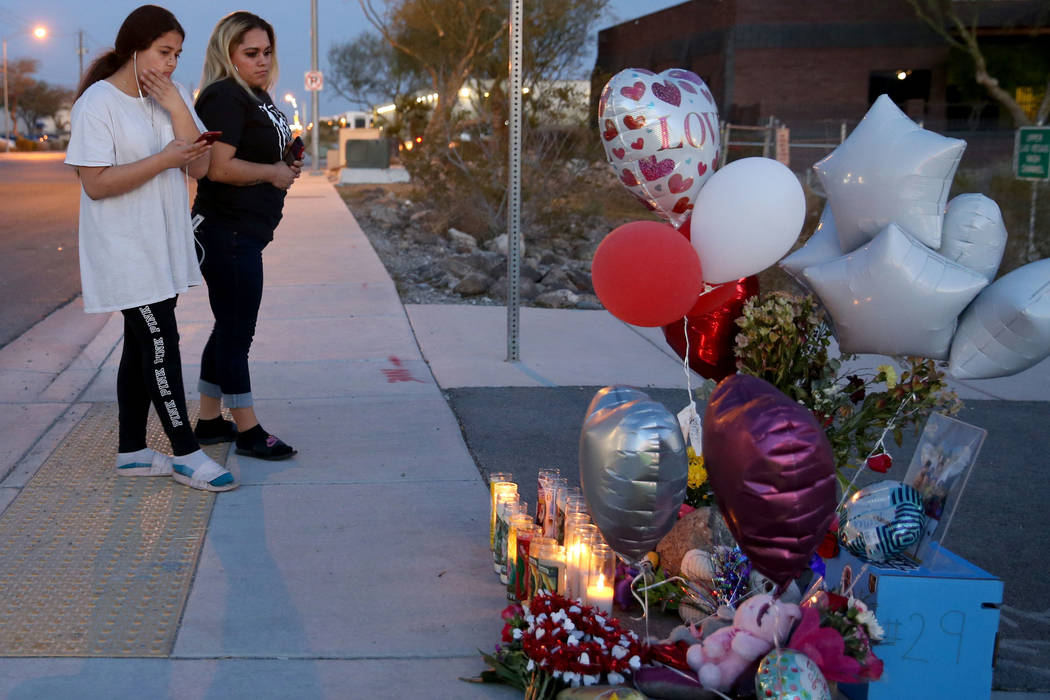 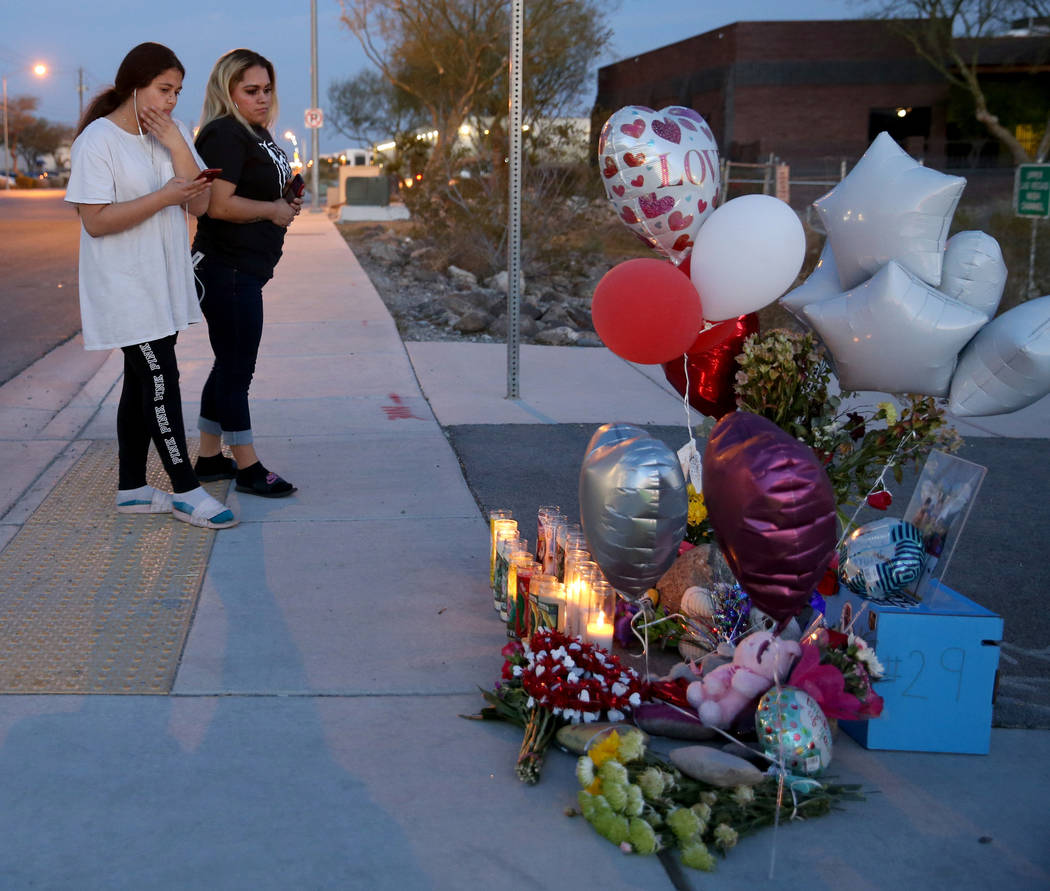 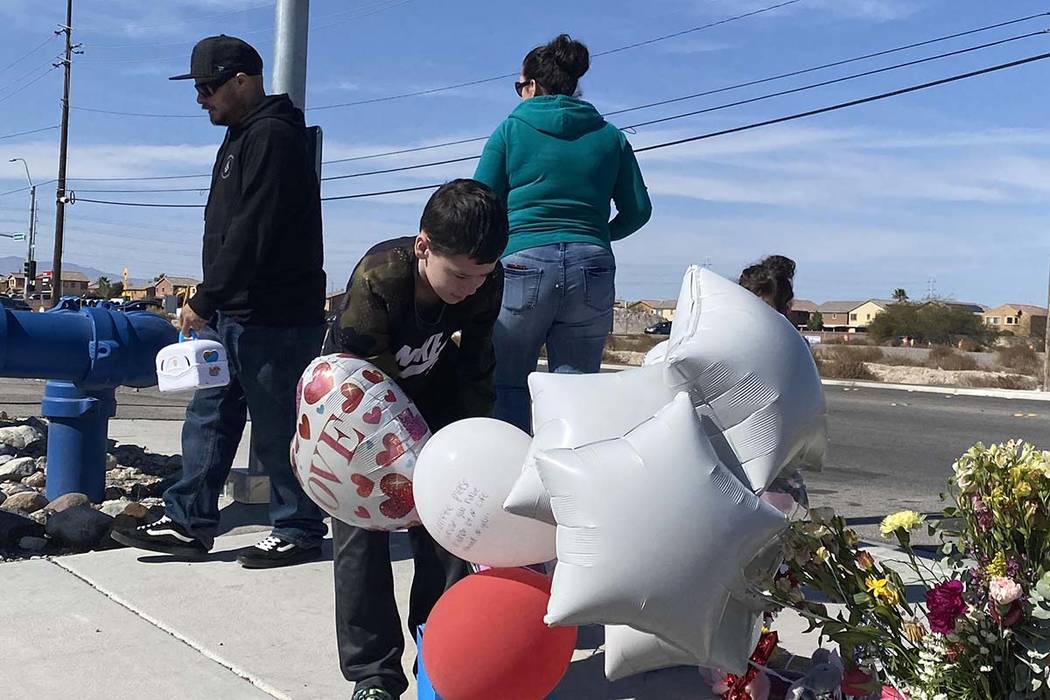 Aiden Maffett, 10, drops off a hockey and super hero box in memory of Alex Bush, 12, at a memorial on Lone Mountain Road in North Las Vegas, Monday, Feb. 17, 2020. Alex and his sister Charlotte were struck by a pickup at a crosswalk near the Somerset Academy Losee campus on Friday, Feb. 13. (Glenn Puit/Las Vegas Review-Journal) 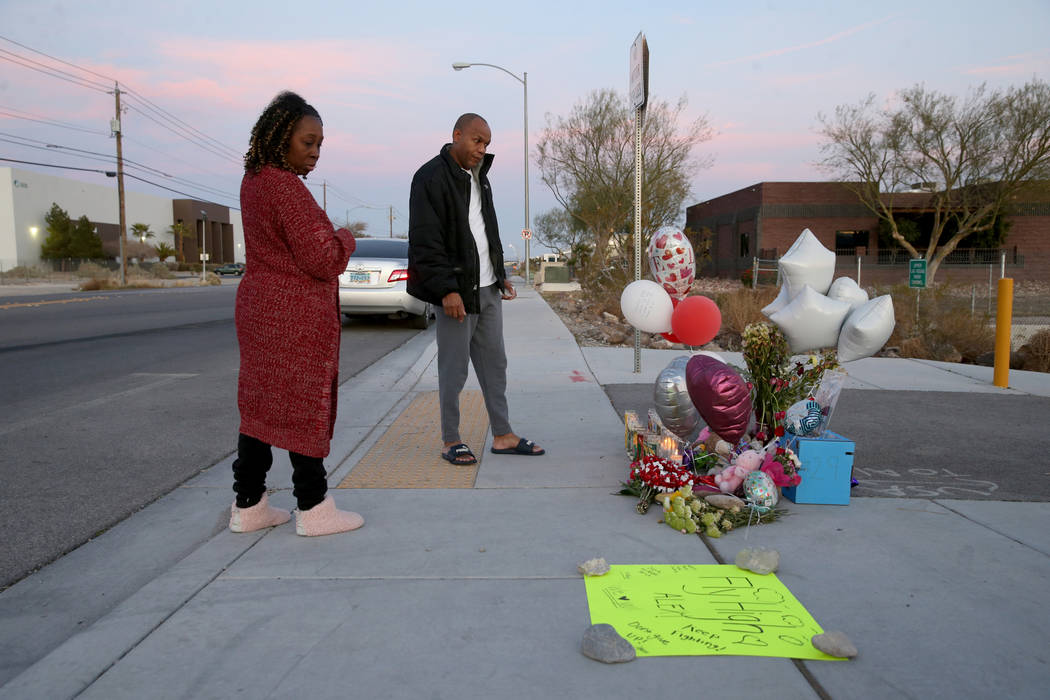 Michelle Johnson and Roy Simms of North Las Vegas pays her respects Monday, Feb. 17, 2020, at a memorial for a 12-year-old boy who died Friday after getting struck by a pickup truck in the crosswalk on Lone Mountain Road, just east of Losee Road in North Las Vegas. (K.M. Cannon/Las Vegas Review-Journal) @KMCannonPhoto 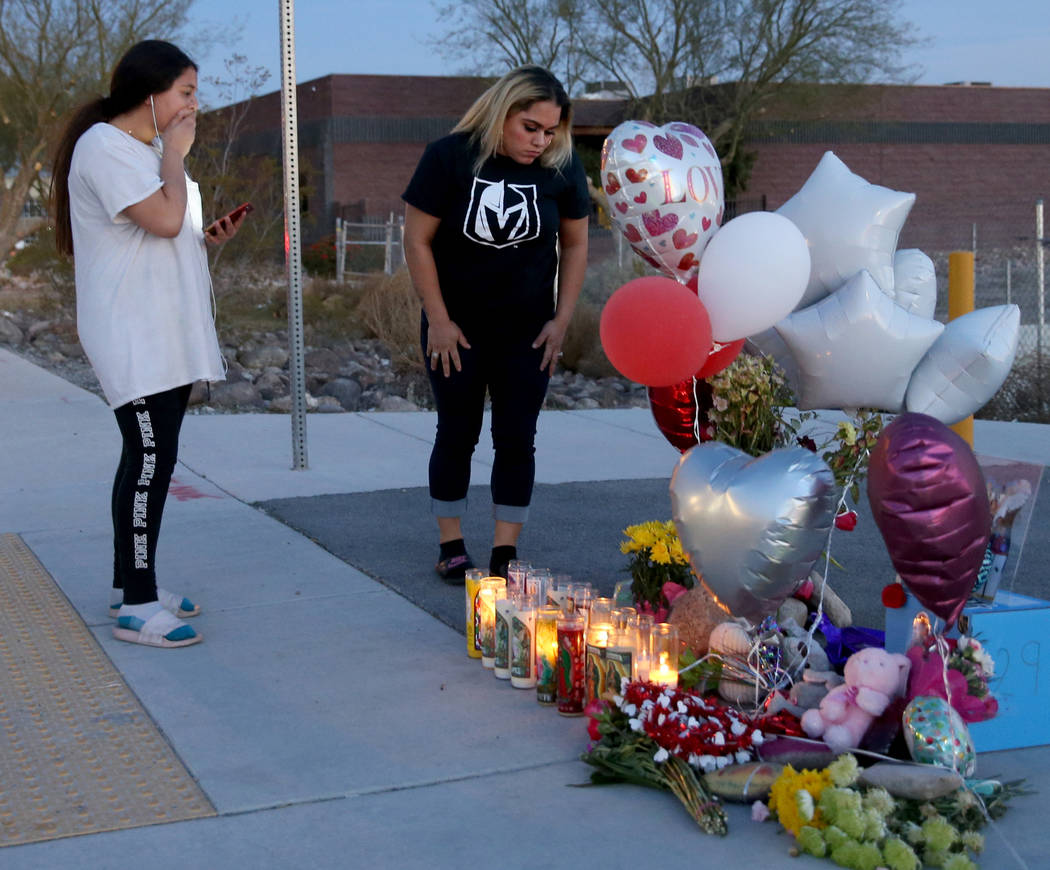 A crosswalk where two youths were struck by a pickup Friday in North Las Vegas, killing one of them, is not safe because of inadequate, hard-to-see lighting and faded road markings, say students familiar with the thoroughfare.

The crosswalk is on Lone Mountain Road, just east of Losee Road in North Las Vegas, adjacent to Somerset Academy. North Las Vegas police said a 12-year-old boy and his 9-year-old sister — both students at the academy — were using the crosswalk around 3:30 p.m. when they were struck by a black Dodge Ram pickup driven by Mark Kline, 47.

The boy and his sister were both rushed to University Medical Center in Las Vegas in critical condition, but the boy later died. They have not been identified by authorities, although other students, social media and online postings identify them as Alex and Charlotte Bush.

MiKinzie Dowdy and Jayson Cooper, both students at Somerset Academy, said Monday that they were friends with Alex Bush. They showed up Monday afternoon at a makeshift memorial on Lone Mountain to offer their respects to their late friend and his sister, who remains hospitalized.

‘You can barely see the light’

Both Cooper and Dowdy said the crosswalk where their classmates were struck is dangerous, especially during daytime hours when the flashing lights are barely visible in the sunlight’s glare.

“… When you press it you can barely see that light, especially if you are just zooming past. Nobody really pays attention to the light and I feel like if there is going to be a light there, it needs to be way bigger. That way more people can see it and more people can realize that there are students crossing.”

“Cars just run through it and they don’t really stop,” he said. “They only stop if they see you and if they can’t see you they are just running through and you have to stop yourself. It’s such a tiny flashlight you can’t really see it.”

North Las Vegas police said they were not aware of any previous incidents at the crossing. There was not a school crossing guard at the crossing because it has flashing lights, they said.

Dowdy said many students choose not to use the crosswalk on Lone Mountain and instead walk roughly 100 yards west to the intersection of Lone Mountain and Losee Road, where there are traffic lights at a four-way intersection. Additionally, much of the stretch of Losee in front of the academy is a marked school zone with flashing lights and a 15 mph speed limit, while Lone Mountain is not a marked school zone and there are no signs displaying the 35 mph speed limit within roughly a half a mile in either direction.

“I personally feel like less cars stop here (at the crosswalk) and more cars stop (at the intersection) and I feel like that is a more safer route,” Dowdy said.

The memorial on Lone Mountain in honor of the children was slowly growing Monday as passers-by stopped and placed candles, flowers or trinkets at the site. One who showed up to pay his respects was Aiden Maffett, 10. The child’s mother, Amy Markoe, said her son played hockey with Alex Bush at the Las Vegas Ice Center.

“I came to support him and all the things he’s done for me,” Maffett said.

Maffett said his friend came to his birthday party. Maffett and his mother brought a box with a photo of Alex’s picture in tribute to the child. Maffett said “we added wings” to the picture.

“We are putting this out here to pay our respects,” Markoe said.

Community members also were digging into their wallets to support the family, donating more than $45,000 via two separate Gofundme accounts.

A Gofundme account titled “Help the family of Losee siblings struck by a car” had committals of more than $23,000 from 352 donors as of Monday evening. A second Gofundme account created by Patricia Hansen-Vosberg, who said she worked with the childrens’ father, Aaron, many years ago at a Shakespeare Festival in Utah, had more than $26.000 in pledges.

“I know that the theater community is a very generous community, but I was still shocked,” Hansen-Vosberg said of the donations. “It blows my mind as to how people have stepped up.”

Kline, meanwhile, faces charges of failing to use due care around pedestrians and one charge each of failing to maintain lane and failing to give full time and attention to driving. North Las Vegas police said they later a charge of vehicular manslaughter against Kline on Sunday.

“Vehicles make small marks on the roadway in accidents and the traffic division has hours and hours of training to determine where the vehicle came from and the pattern it shows,” he said.

He said investigators were still analyzing evidence from the scene in an effort to determine if Kline was speeding.