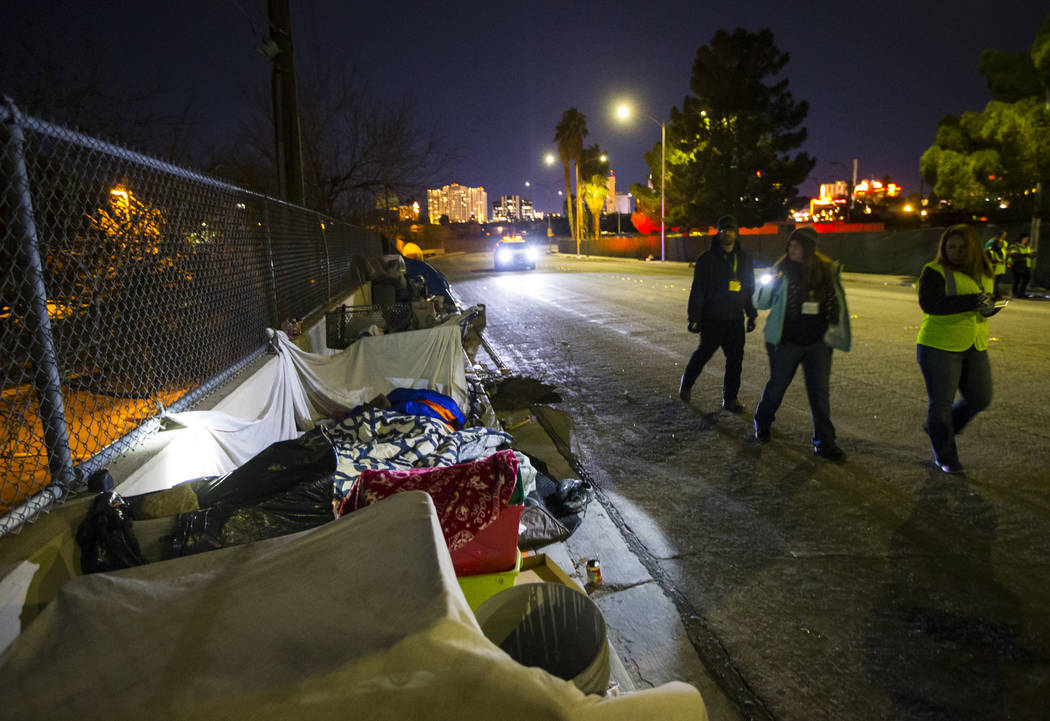 Clark County’s plan to end homelessness and expand affordable housing has seen success, but there is much more to accomplish, officials said.

Sixty families have been placed in transitional housing in the Las Vegas Valley since Sept. 1, months after Clark County approved $9.8 million in marijuana business licensing fees to address homelessness.

“We committed that we would use these flexible funds to address gaps that exist in our current system, while leveraging the existing collaborative environment we have with our partners,” Tim Burch, administrator of human services, told county commissioners Tuesday. “We wanted to make sure that we used this nonfederal funding to be innovative and drive real and lasting solutions.”

The county estimates that about 14,114 people will experience homelessness in Clark County at some point this year.

Since Sept. 1, the county has scaled up bridge housing programs for families, which emphasize short stays and rapid connections to permanent housing. It also increased the number of housing units for families, medically fragile and homeless youth and secured master leases to obtain additional housing.

Twenty-three families were placed in bridge housing and 37 in rapid rehousing programs. And the county has secured 14 units on a master lease.

“We didn’t congregate them all in downtown Las Vegas,” Burch said. “We’re really trying to be thoughtful about getting people close to employment opportunities, transportation lines and schools.”

Nearly $1.8 million went to help the medically fragile and homeless youth. The money has added 30 more beds — from 60 to 90 — for medically fragile people leaving the hospital. An application is out to the Department of Housing and Urban Development that would expand that number to 133 units.

Michele Fuller-Hallauer, a social service manager for the county, said that HELP of Southern Nevada’s Shannon West Homeless Youth Center had clients exit out of shelter beds to housing permanency with an 80 percent success rate.

Those exiting the program move into their own housing, without any support, or back to family and friends’ homes through a transitional program, she said. But the need for more housing and shelter is apparent valleywide, according to officials.

Part of the plan is to expand shelters from outside the Corridor of Hope along Las Vegas Boulevard North near downtown.

Fuller-Hallauer said the county is seeking proposals for smaller shelters that have lower barriers “so that we can assure that everybody who seeks to have shelter services is able to get into a shelter.”

“It needs to be all over the valley, not just in one location,” Fuller-Hallauer said. “So folks know that they have a place to lay their head on every night, so they don’t have to stand in line every night … to know that they are solid for that week, a month, and access services, get their feet up underneath them and move toward stability.”

Nevada has the fewest affordable housing units in the U.S. at 19 per 100 people, according to the report presented at Tuesday’s commission meeting. In Clark County, there are 14 per 100 people.

But more than 500 units are under construction at six affordable housing apartment complexes in the Las Vegas Valley, and about 700 more units are planned in the near future.

But there is a shortage of about 70,000 low-income units in the county, and 5,000 units might lose affordability in the next seven years, Assistant County Manager Kevin Schiller said.

“If we don’t keep things affordable, we lose capacity, we chase our tail, the hole gets deeper,” he said. “So how do we get people invested to maintain the affordability?”

The county is implementing a trial through the end of the year to divert people from becoming homeless. That includes working with landlords and helping clients who might be facing eviction with one-time payments for rent and other unexpected expenses.

County Commissioner Marilyn Kirkpatrick said she was impressed with the progress of the social services team.

“We have moved mountains, and now the fruits of our labor are going to pay off,” she said, emphasizing a collaborative and regional approach to the issue. “We’re willing to look at things outside of the box, things that you don’t see. We’re trying to get out of the cookie-cutter scenario when it comes to shelters. It’s not your typical way that we’ve done things in the past.