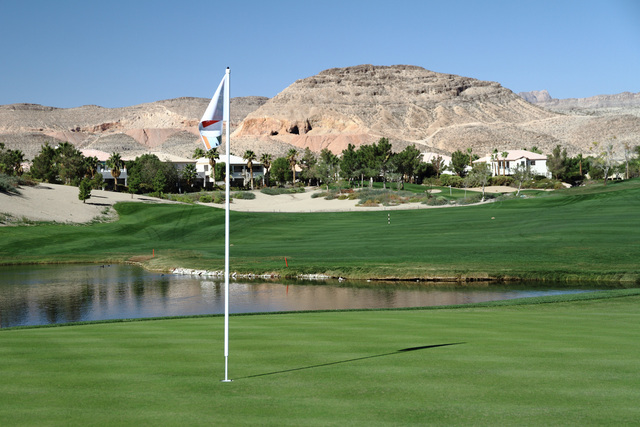 Some residents aren't happy with a proposal to build homes on a portion of the Rhodes Ranch Golf Course. (Rhodes Ranch)

A proposal to build homes on a portion of the Rhodes Ranch Golf Course has some community residents teed off.

Chorus after chorus of boos filled the Rhodes Ranch gymnasium Monday night as some 300 people attended a town-hall style meeting about the proposal, which would affect 6 acres of the course.

Speaking before the audience, attorney Bob Gronauer — representing Rhodes Ranch owner Century Communities — explained what he called “somewhat of a win-win” and the “best proposal” homeowners of the southwest Las Vegas gated community would receive.

Instead, Century Communities wants to build 32 single-family homes on two pieces of golf-course land, Gronauer said. The areas would fall between holes No. 3, 4 and 5.

The course would remain 18 holes, but par would drop from 72 to 71. The sixth hole would would be changed from a par 5 to par 4, Robb Beville, Nevada division president for Century Communities told the Review-Journal this week.

In exchange, Century Communities is offering to pursue a deed restriction that would ensure the rest of the land remains a golf course for a certain number of years.

“This is the least impactful proposal we could come up with,” he said.

But homeowners were not convinced.

During a public comment portion of the Monday meeting, some said changing the course would affect lot premiums. Others expressed concern that reducing the course’s par would damage its appeal to both potential players and buyers.

Candi Morgan, a Rhodes Ranch homeowner since 1998, said she’s heard rumors that hundreds of homes will be built on the course and that the offer of a deed restriction is a “smoke screen.”

“I don’t believe it at all,” she said. “This is just the beginning.”

Shrinking the golf course will allow Century Communities to sell it for a lower price, Beville said. He added that Century Communities has been trying to sell the course — which is losing money — since the beginning of the year, but has no intention to close it.

“We are only seeking golf course operators, not developers,” he said. “We’ve got a couple interested parties but nothing definitive yet.”

Golf courses shuttering in order to free up space for developments had become a familiar occurrence throughout the Las Vegas Valley. Since 2015 at least three courses – Legacy, Badlands and Silverstone – have been purchased by owners seeking to build homes on them.

A GoFundMe campaign was launched last week, claiming to be gathering funds so homeowners can hire an attorney to help them take control of the Rhodes Ranch homeowners association.

“The proposed sale of the golf course within our Community is another issue that may require legal action to protect the interests of (homeowners),” the fundraising webpage states.