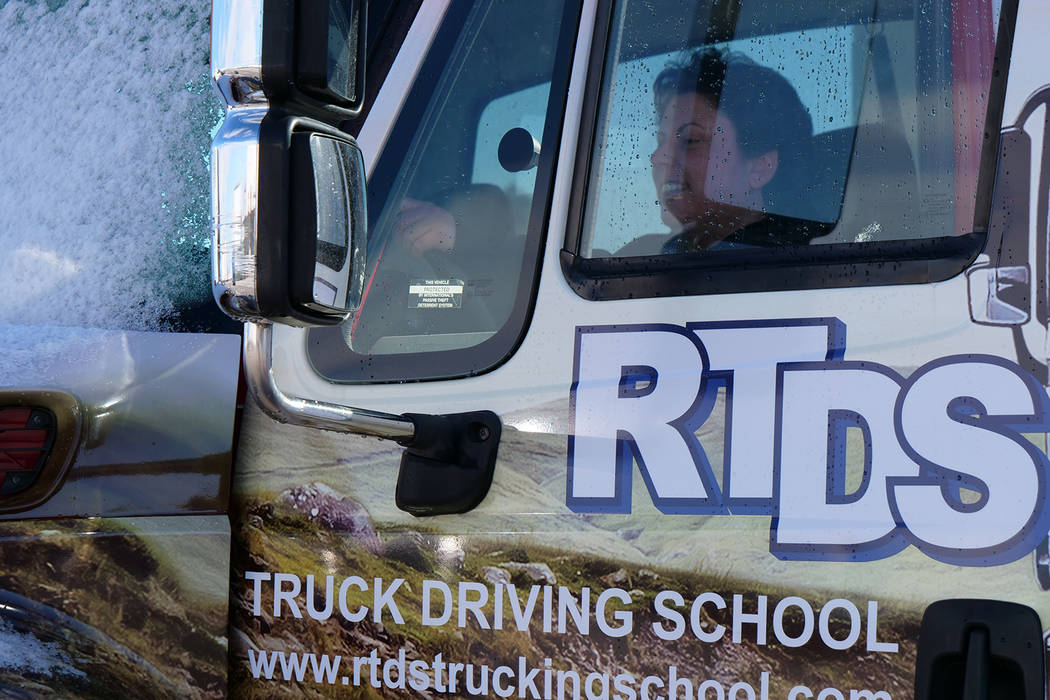 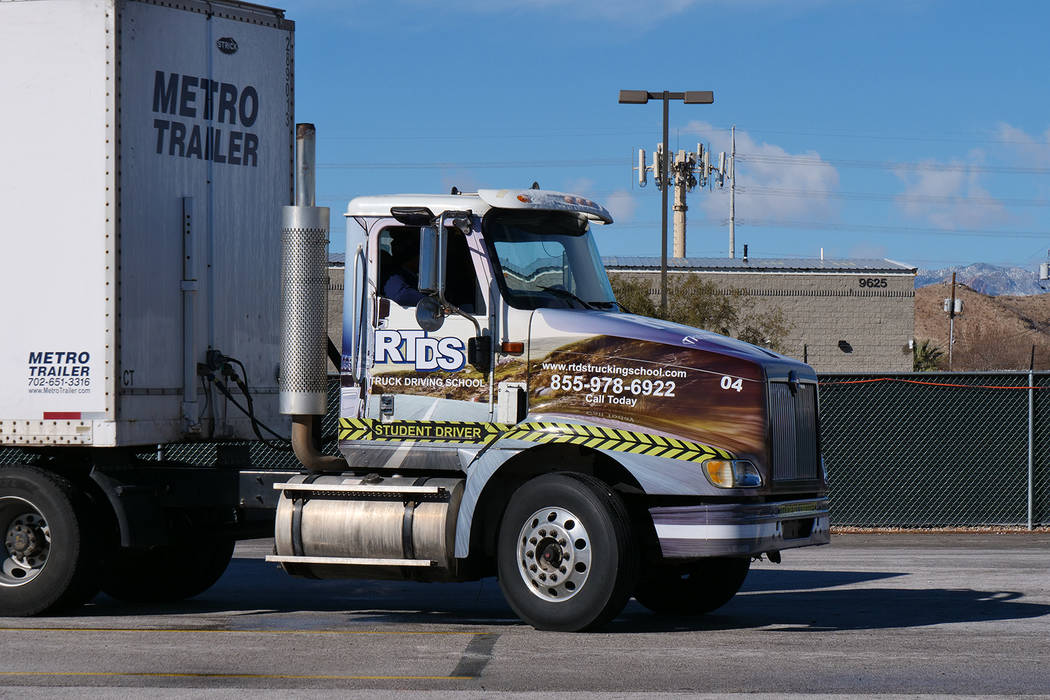 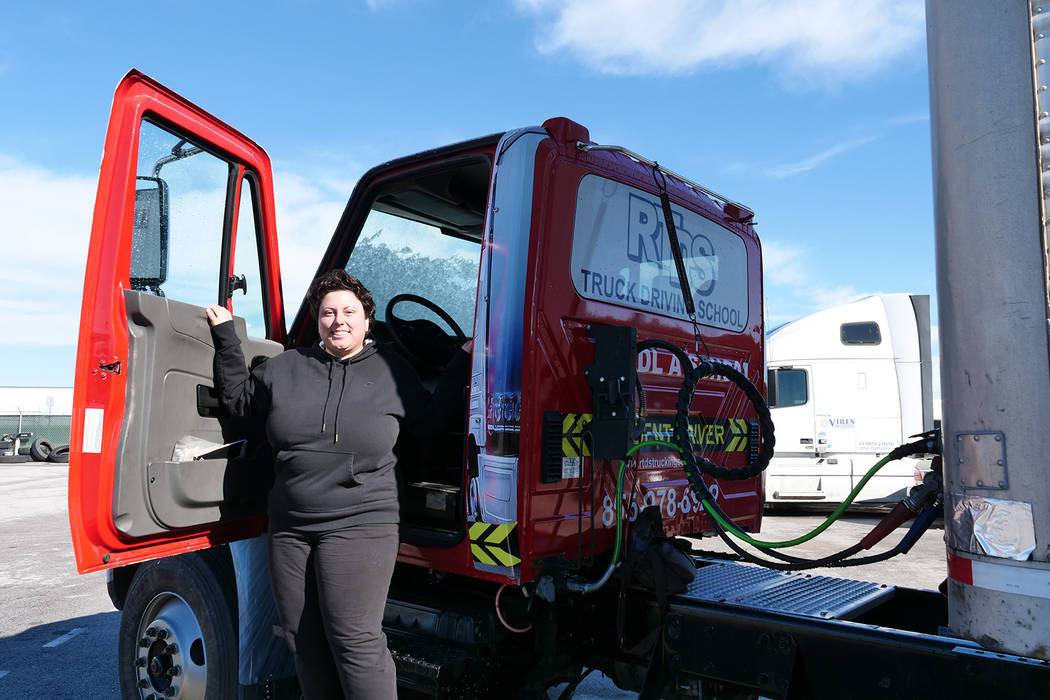 Christa Welther, student at RTDS Trucking School steps out of a truck at the school on Monday, Feb. 18. (RTDS Truck Driving School) 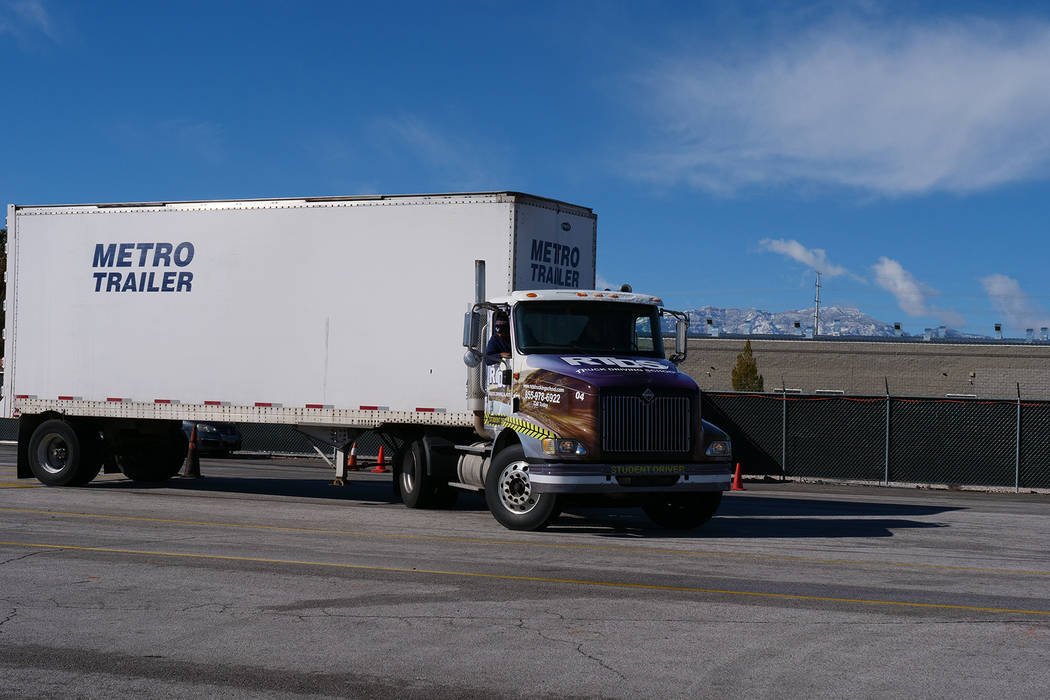 A truck on the course at RTDS Trucking School in southwest Las Vegas on Monday, Feb. 18. (RTDS Truck Driving School)

Christa Welther is a student with RTDS Truck Driving School in southwest Las Vegas. She decided to go to truck driving school for the pay — $60,000 to $80,000 per year, she said — and the opportunity to travel.

At age 26, Welther is the exception in an industry dominated by male baby boomers. Robert Foreman, a third-party Department of Motor Vehicles truck driving tester, said the combination of baby boomer retirement and higher demand for freight has resulted in a shortage of truck drivers across the country.

Foreman, a DMV tester based in Las Vegas, has been in the trucking industry for 31 years, as an instructor with schools, a driver and a tester. He said baby boomer drivers are retiring every day and are not being replaced.

To combat the shortage, Foreman said the age requirement for drivers has lowered. The age requirement when he started was 25; today, 18-year-olds can get their commercial driver’s license, or CDL. In Nevada, CDL drivers ages 18 to 20 have two restrictions on their licenses; they can’t transport passengers or hazardous material and are limited to intrastate travel, according to the DMV website. According to a release from RTDS Truck Driving School, applicants to their program must be 21 years old.

Foreman said he doesn’t like the way some driving schools push students through as quickly as possible, often without enough training.

“My children are the age of the kids I test,” Foreman said. “When I fail them, they cry. I say, ‘If you’re not ready, you’re not ready.’ I just want them to get training.”

Foreman said the DMV is in the process of implementing a mandatory requirement that every new recipient of the CDL have at least 120 hours of training.

At home on the road

Students have to get used to being away from home, Foreman said.

“Sometimes they are scared to leave home,” Bell said.

Welther said she got into trucking partly because of the opportunity to travel.

Welther said she doesn’t have a problem being on the road since she has no family or ties to any one place.

Welther has all of her endorsements and took her final test this week. Endorsements are extra permission drivers can add to their CDL that allow them to transport specific types of goods and drive different types of trucks.

About 8 percent of truck drivers in the U.S. were women at the end of 2017, according to Women in Trucking, a nonprofit association aimed at bringing women into the trucking industry.

Welther said she has Asperger’s syndrome and attention deficit hyperactivity disorder. She said she wants to show people that truck driving can work for women and people with developmental disorders.

“Dealing with disability is sometimes hard for me here,” Welther said. “Sometimes I get meltdowns and I am intimidated by others.”

RTDS plans to expand its lot off Blue Diamond Road.