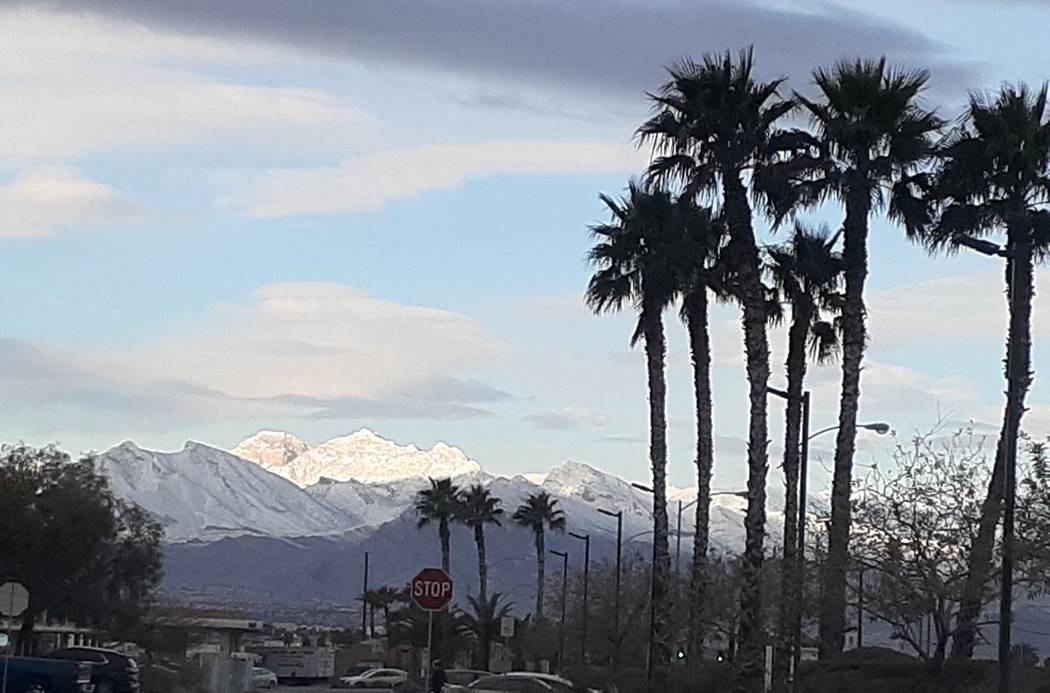 Unofficially, about 6 to 8 inches of snow fell in the Spring Mountains Sunday and Monday, Feb. 9-10, 2020, according to the National Weather Service. The precipitation is gone from the Las Vegas area, but strong winds will stay through Tuesday, Feb. 11, 2020. (Marvin Clemons/Las Vegas Review-Journal)

The rain and snowfall has left the Las Vegas area, but chilly winds will remain for a few more days.

“The clouds were supposed to be clearing all Monday morning, but they cleared out about 3 a.m.,” said National Weather Service meteorologist Jenn Varian. “But those cold northerly winds won’t go away until after sunset Tuesday.”

The gusts will likely be at their highest right after sunrise on Tuesday, Varian said, possibly about 30 mph at McCarran International Airport.

Gusts across the valley will reach 25 mph on Monday when it’s expected to be mostly sunny with a high of 63, about 2 degrees above normal. The overnight low should be around 40, but wind gusts up to 30 mph will make it feel much colder.

Tuesday will also be sunny. The high will reach about 58 with wind gusts up to 30 mph.

No official totals have been measured as of 4:30 a.m., but snowfall at Mount Charleston and the Spring Mountains is expected to be between 6 and 8 inches, Varian said.

A snow advisory issued by the weather service expired at 4 a.m.

“They had 1 to 2 inches last night on the roads and 3 to 4 inches on the grass and other surfaces and it was still snowing pretty hard, so probably 6 to 8 inches,” Varian said.

The official reading will be taken later Monday morning by the Mt. Charleston Fire Department.

Rainfall at McCarran from the storm, in the first rainfall of the year, was .07 inches from 11:40 p.m. Sunday to 12:56 a.m. Monday when the rain stopped at the airport.

Wind gusts may reach 40 mph with steady northeast winds at 15 to 25 mph.