Clark County Fire Department investigators are focusing on the Bellagio’s electrical and lighting systems as the likely culprit in a scary wind-whipped fire that scorched exterior building panels along the resort’s roof line Thursday night.

Deputy Chief Jeff Buchanan identified the exterior electrical systems as the focus of the investigation at a briefing Friday, while noting that the cause of the fire has not yet been determined.

He said an initial estimate put the damage to the building at $400,000 to $450,000. Retail stores beneath the area where the fire burned were not damaged.

Crews were called to the resort about 10:45 p.m. Thursday and arrived in roughly five minutes. Firefighters initially had difficulties reaching the flames burning in flammable exterior panels above retail shops on the north side of the Bellagio’s famed fountain — and windy conditions threatened to further spread the fire.

Fire fighters appear to have the worst of the #Bellagio fire under control now. The Strip is closed. pic.twitter.com/OfhGDiGcle

But Buchanan said firefighters quickly sized up the situation at the hotel-casino at 3600 Las Vegas Blvd. South and had the blaze under control in 20 minutes.

He said firefighters used a piece of equipment called a deck gun to spray the flames from a distance, while others used ladder trucks to move in closer, Buchanan said.

“We have a very systematic approach to all the high rise fires that are on the Strip,” he said. “We protect some of the most expensive and valuable property in the world, and our men and women are trained to a very, very high level.”

Firefighter Zack Schaeffer said the department’s success is largely tied to its culture of preparedness.

“We plan every day. … We talk about it over breakfast sometimes,” he said. “We pick a building and we talk about everything that could go wrong there.”

As if the #Bellagio is on firepic.twitter.com/Fav5zystqF

The short-lived fire at the Bellagio, which resembled a 2008 blaze at the Monte Carlo, drew a crowd of onlookers along the Strip and got the attention of guests at nearby hotels.

Jill Long of Pittsburgh said she could see the fire and the smell the smoke from the balcony of her hotel room at The Cosmopolitan of Las Vegas, as well as debris flying from the fire and into the lake next to the retail shops.

“There was just a lot of fire and a lot of smoke,” Long said Thursday night. “It smells terrible.”

Jill Long of Pittsburgh took this video of the fire from her room balcony at the Cosmo. She said debris was flying into the fountain pic.twitter.com/Bb2aVSZLEn

Seventy-seven crew members responded to the scene, which shut down Las Vegas Boulevard for hours.

The fire drew comparisons to a Jan. 25, 2008, fire at the Monte Carlo that scorched the building’s upper façade. Both blazes involved a flammable building material known as Exterior Installation and Finish System — EIFS for short. 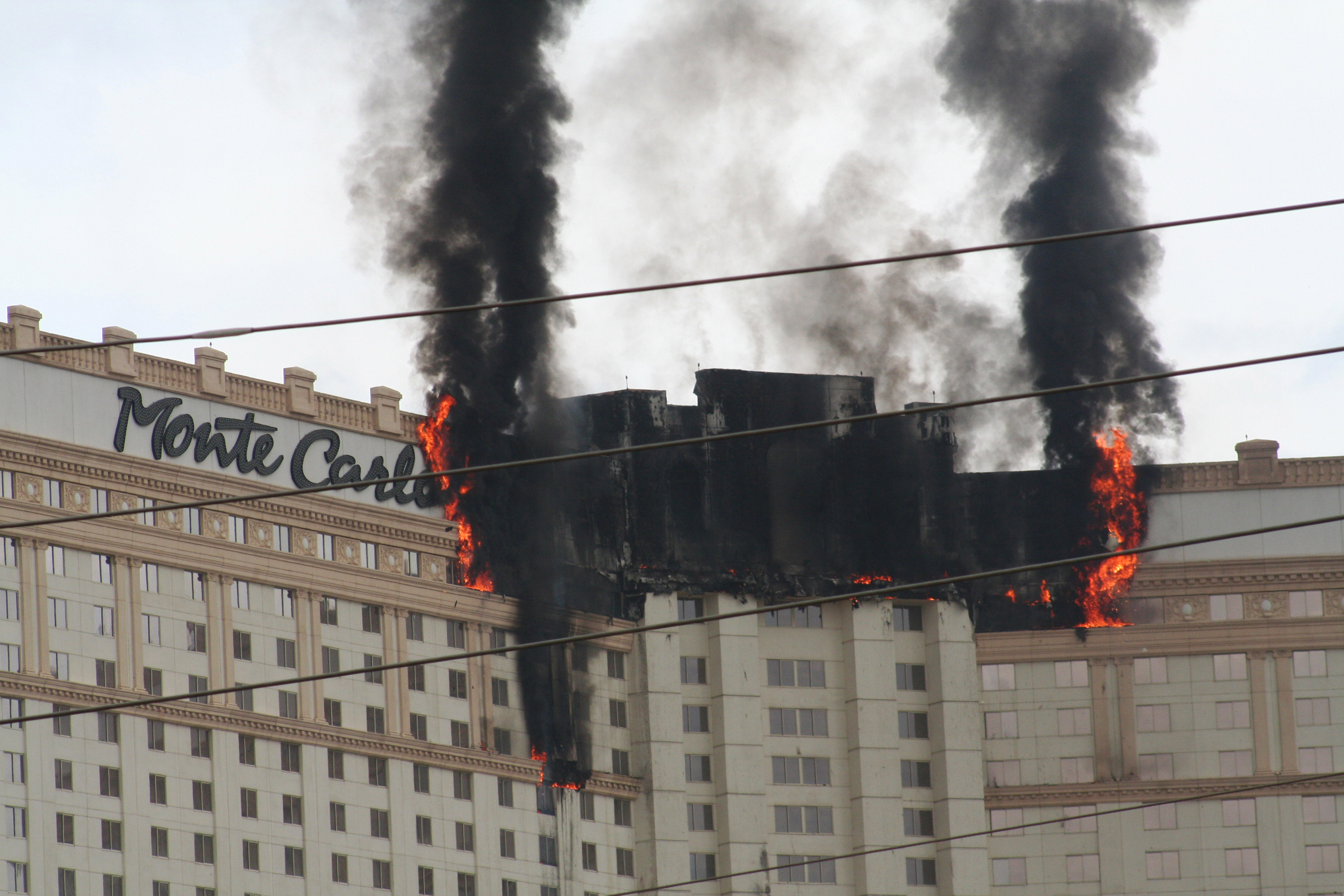 Smoke and flames rise after a fire broke out at the Monte Carlo hotel-casino in Las Vegas, Friday, Jan. 25, 2008. (Robin Tait/AP)

That fire caused substantial damage to the upper six floors of the 32-story hotel-casino and forced its closure for more than a week.

The Bellagio got off easier: Nobody was injured and no guests had to be evacuated. A few guests and employees were briefly evacuated from the retail shop area, a spokeswoman said. A statement posted on the Bellagio’s Twitter account Friday said the entire resort was open for business as usual.

There's a fire at the #bellagio right now in LV – we just got kicked out of Olives pic.twitter.com/4IdD9En16q

While EIFS can burn at high temperatures, it is extremely common on the exterior of commercial buildings around the world.

Scene from the Strip, out in front of The Paris. pic.twitter.com/nESDOOTaFF

Las Vegas police said Wednesday that overall violent crime is up less than 1 percent in 2020 on the Strip and adjacent areas, but aggravated assaults are up 29 percent year to date compared with 2019.