A man died after being run over by a dump truck on the south end of the Strip on Wednesday morning.

Police determined the man died after being run over by a GMC dump truck in a vacant lot that appeared to be frequented by homeless people, according to a Metro release. The truck was traveling through a dirt lot between a tree and a dirt mound when it ran over the man, who was near the tree, police said.

The 39-year-old driver of the truck was told by his co-worker, who was operating another vehicle, that he had run over the man. The driver returned to the scene and provided a statement to police.

The man’s death will not be counted in Metro’s traffic fatality statistics because it happened “in an off highway environment,” the release said.

The man was not carrying identification when he was found. The Clark County coroner’s office will identify the man and determine his cause and manner of death. 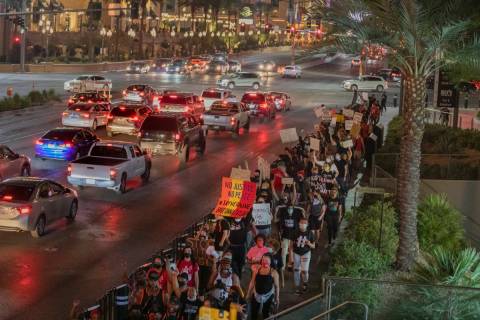 A march on the Las Vegas Strip brought more than 100 people calling for justice in the death of Breonna Taylor in Kentucky, after a grand jury determined there was no criminal violation among the officers involved in her shooting.

As Donna Rocker says of Raiders revelry at her bar and restaurant, “Asking people not to cheer during that game would be like asking someone not to scream on a roller coaster.”