It takes 1,455 stairs and countless breaths to reach the top of Las Vegas’ tallest tower.

It took 27-year-old Alexis Trujillo of Mexico City 7 minutes and 13 seconds to climb to the top of The STRAT, 2000 Las Vegas Boulevard South, on Sunday. He was the first to climb all 108 of the resort’s floors as part of the Scale the Strat Fight for Air Climb fundraiser on Sunday, according to a release.

Firefighters scaled the tower in full garb, each carrying about 60 pounds in gear. The fastest firefighter up the tower was Jeff Golden, 38, of California, who finished in 15 minutes and 30 seconds, the release said.

More than 1,000 had registered for the climb benefiting the American Lung Association in Nevada. More than $300,000 had been raised as of Sunday, but fundraising continues online at scalethestrat.com through March 24, the release said. 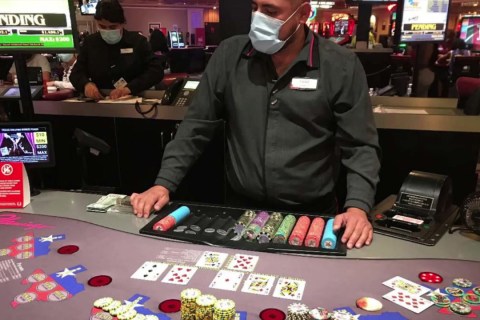 Two Las Vegas visitors started their weekends with a bang, thanks to two jackpots, including one for nearly $2 million.