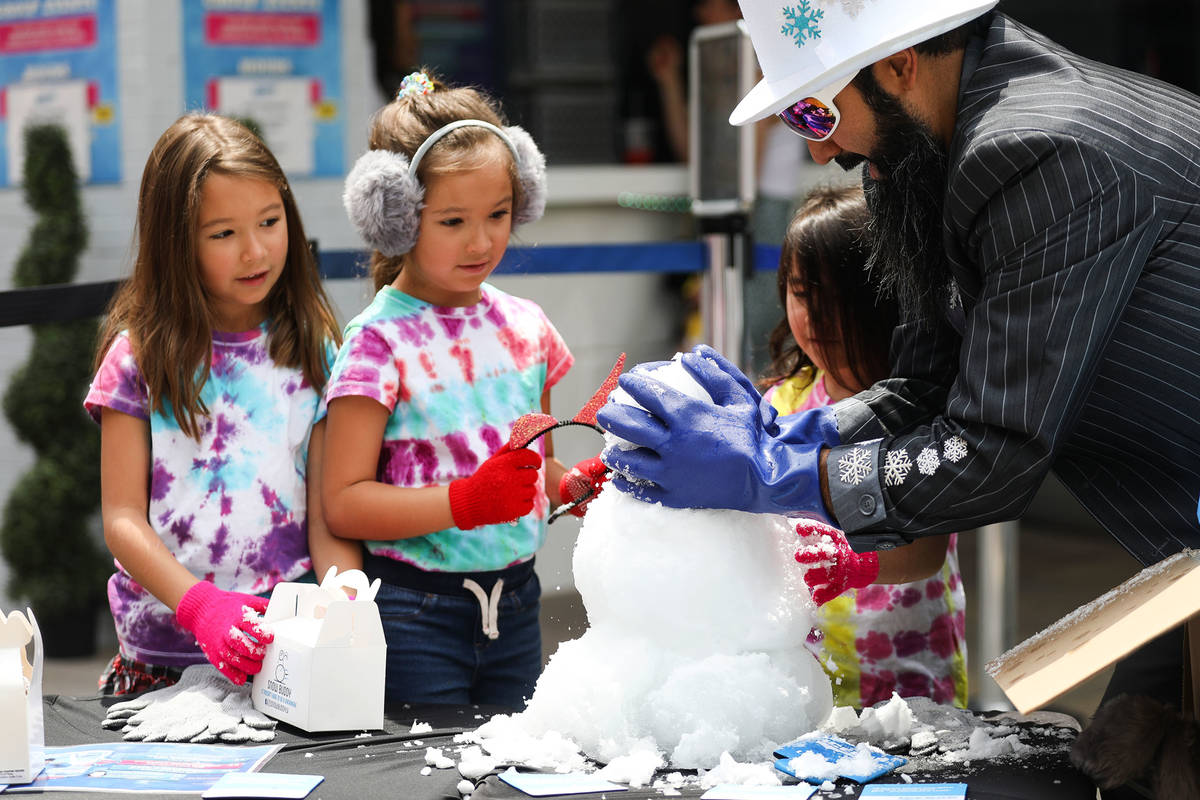 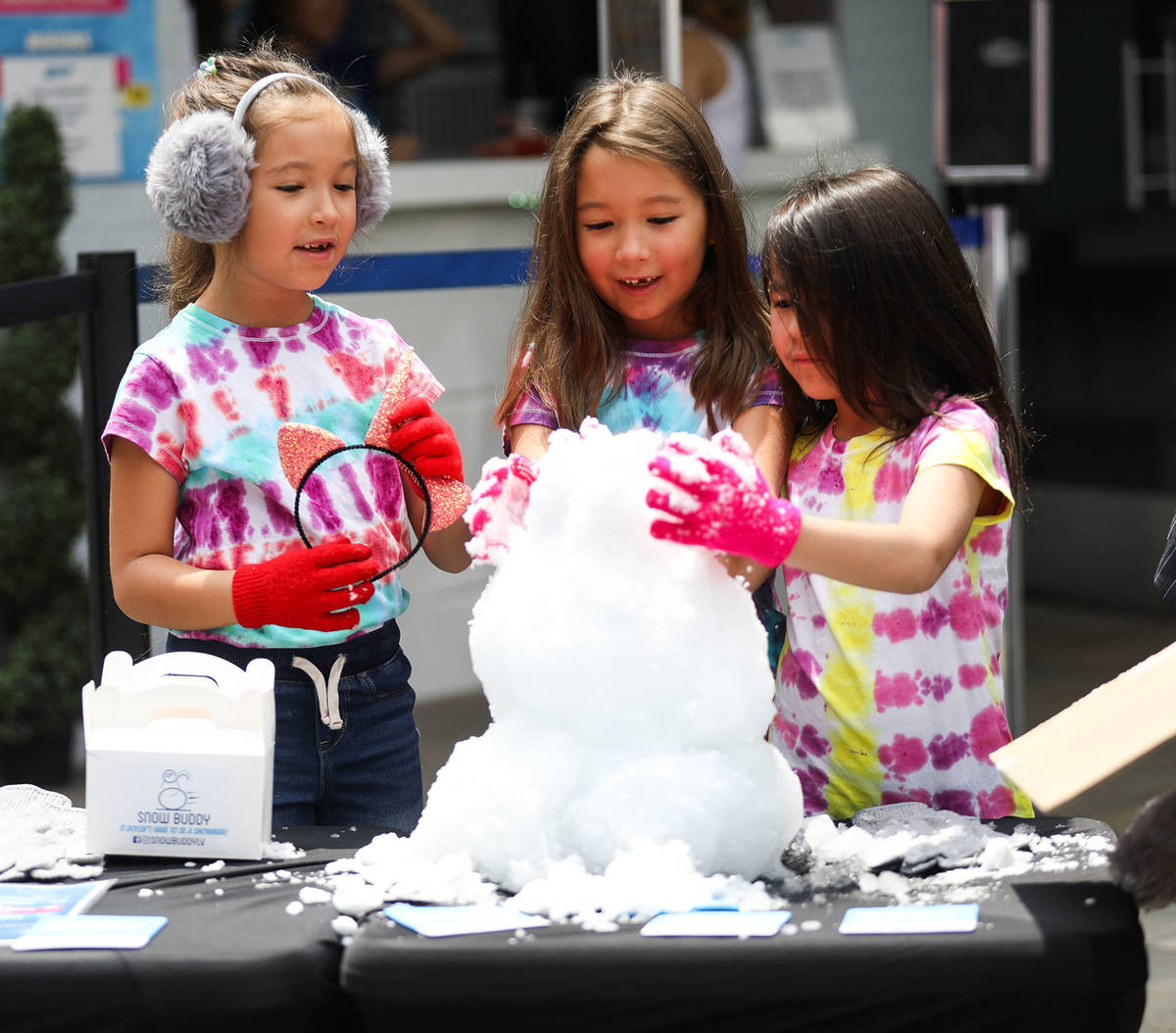 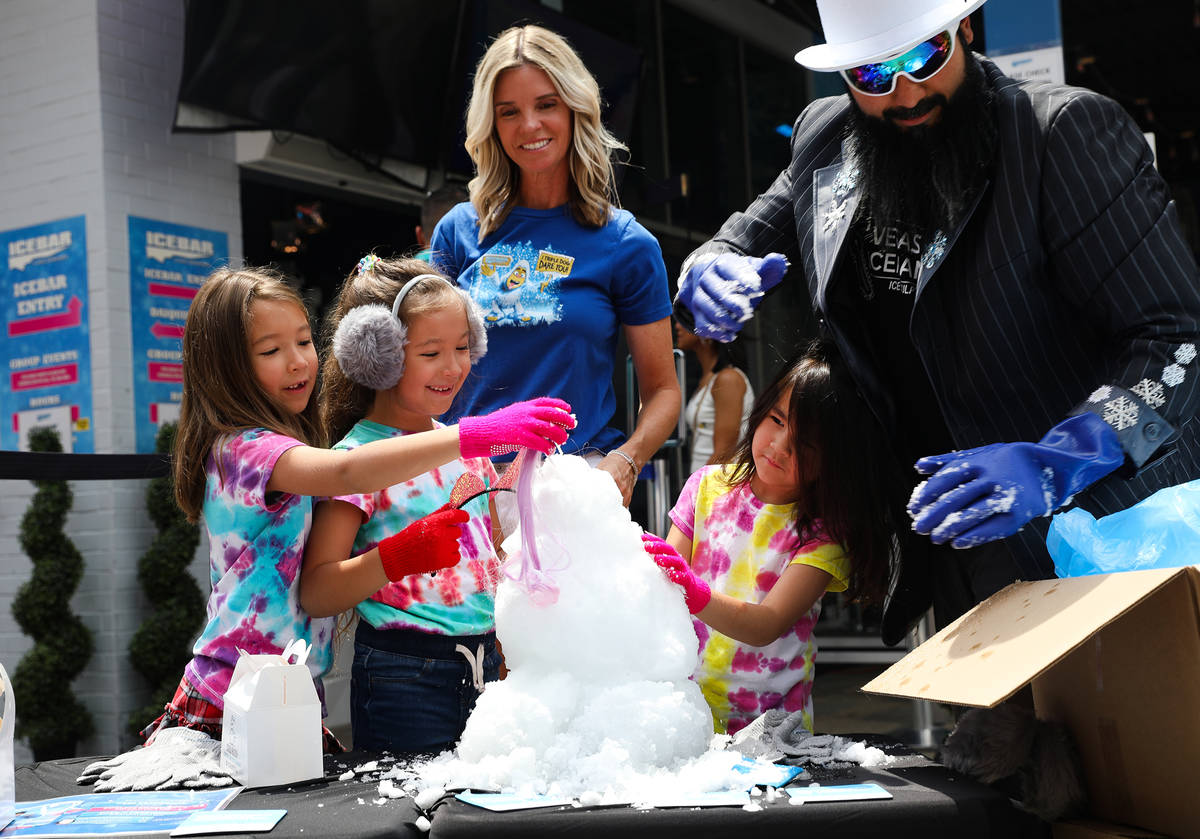 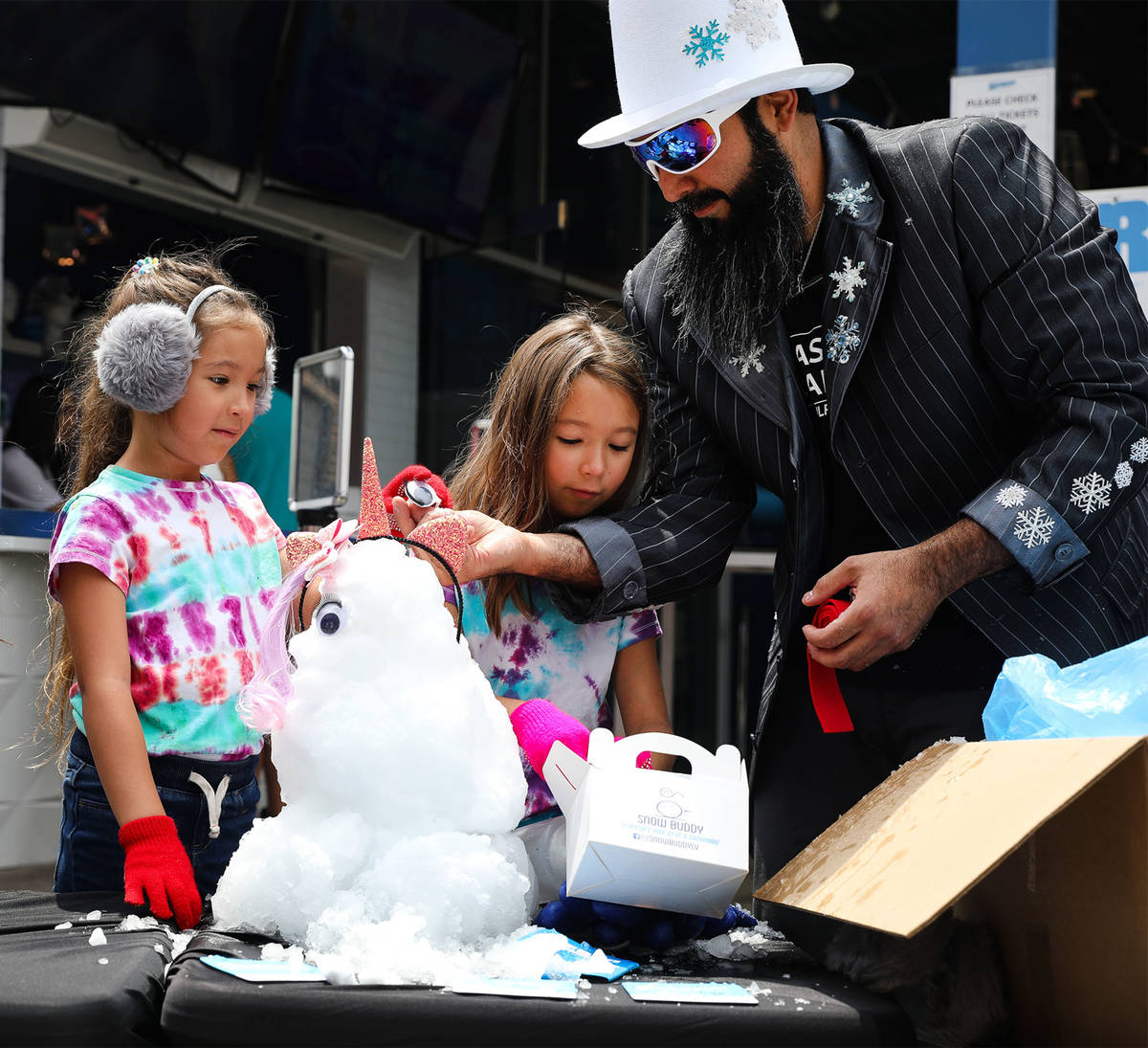 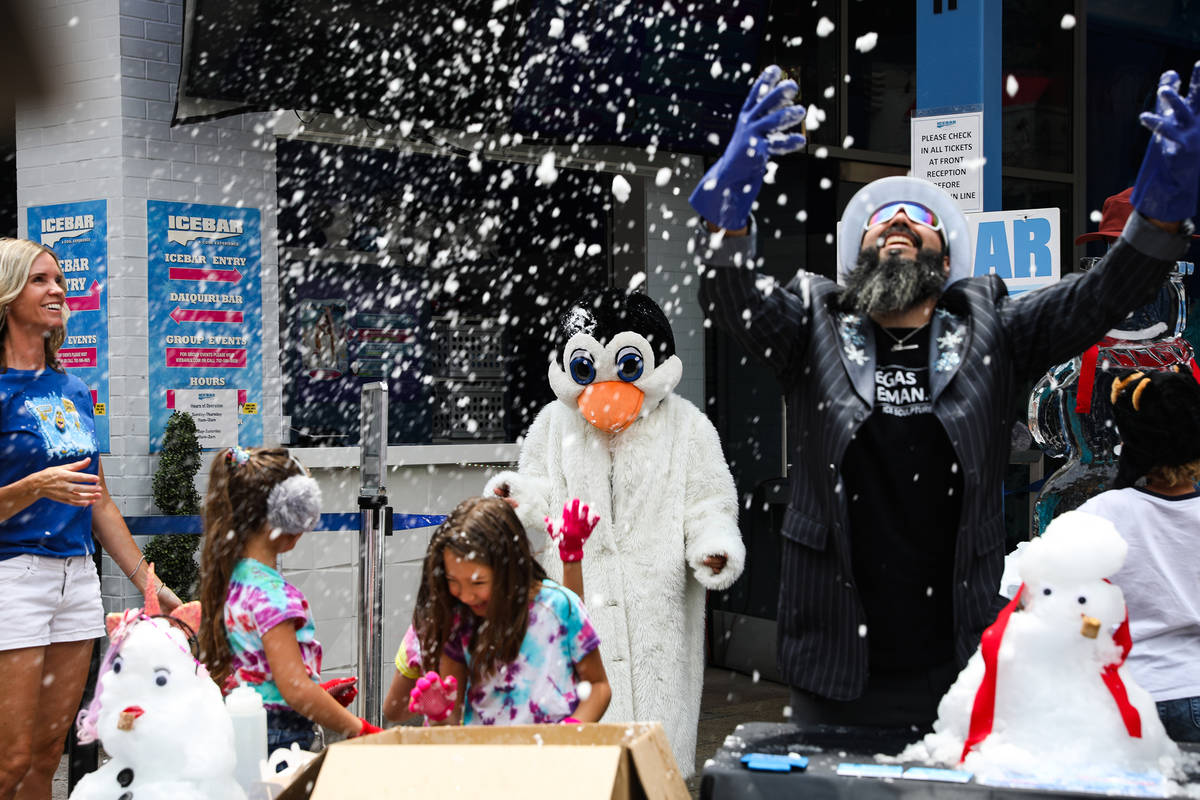 Marco Villarreal, known as "Vegas Ice Man," throws snow in the air at an event to promote the Icebar at the LINQ Promenade in Las Vegas, Thursday, June 17, 2021. (Rachel Aston/Las Vegas Review-Journal) @rookie__rae 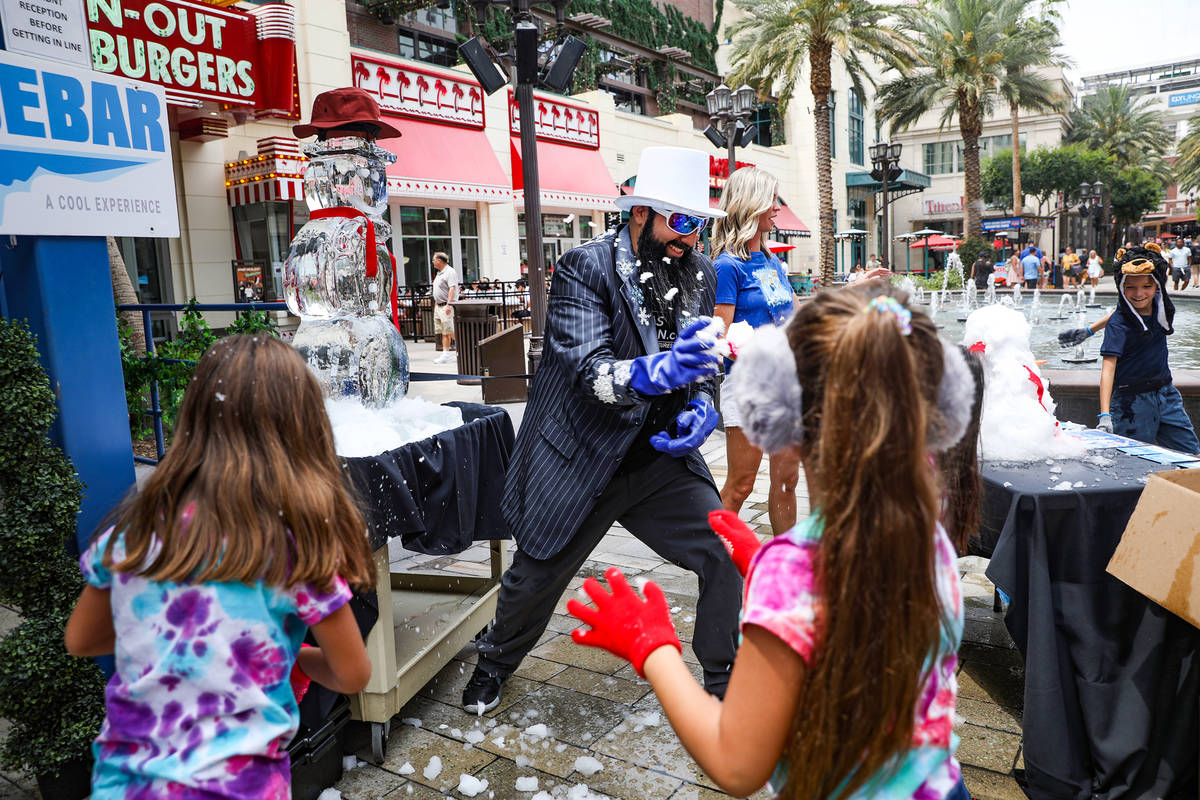 Marco Villarreal, known as "Vegas Ice Man," has a snowball fight with his daughters at an event to promote the Icebar at the LINQ Promenade in Las Vegas, Thursday, June 17, 2021. (Rachel Aston/Las Vegas Review-Journal) @rookie__rae

On a day when Las Vegas broke another heat record, children built snowmen and started a mini snowball fight at The Linq Promenade.

“It’s pretty impressive to be able to do something like this in the middle of this heat and in the Mojave Desert,” said Noel Bowman, owner of Icebar and host of a snowman-building event on Thursday.

Bowman said he started brainstorming ideas on Monday after seeing the forecast for a weeklong heat wave. But it was his 8-year-old son, Jackson, who came up with the design.

“He said, ‘Dad, let’s build a snowman’,” Bowman said. “We’re always doing such cool stuff inside, but what could we do to bring it outside and play off the heat?”

Icebar claims to be the largest of its kind in the world, made from more than 100 tons of ice. It recently went through renovations, and a team of 13 carvers from the U.S. and Europe worked to construct new pieces. Every few months the ice will shrink, leading to another remodel.

“We’re always redoing the experience, and it leads to something new,” Bowman said. “Vegas is all about being whimsical and different, and this is certainly different.”

Thursday’s frozen escape came amid the third straight day of temperatures reaching or exceeding 113 degrees, with Thursday setting a daily record of 114.

An excessive heat warning that began Monday was extended through Sunday. Temperatures are expected to drop next week but still be above average, according to National Weather Service meteorologist John Salmen.

Despite the heat, children participating in the snowman event put on gloves and parkas to handle the snow and throw it at people walking by.

“It’s so relaxing, said 7-year-old Mabel Villarreal, while stretching her arms in the air. “In the summer it gets really hot, and you want to cool down, so ice is the one way to do that.”

Mabel’s father, Marco, provided more than 100 pounds of snow for the children to play with on Thursday. Last June, he launched Snow Buddy, an at-home snow delivery service. Marco said business has picked up over the past few weeks, and he expects it to increase during summer.

“People still want to be outside, so why not throw a little bit of snow,” Marco Villarreal said. “It’s a totally different experience being in the summer.”

Villarreal, who also creates sculptures with ice, often brings home boxes of snow for his two daughters to play with. And despite the fun of throwing the snow, Mabel said she slightly prefers another use.

“My favorite part of snow is eating it,” she said. “It tastes good.”