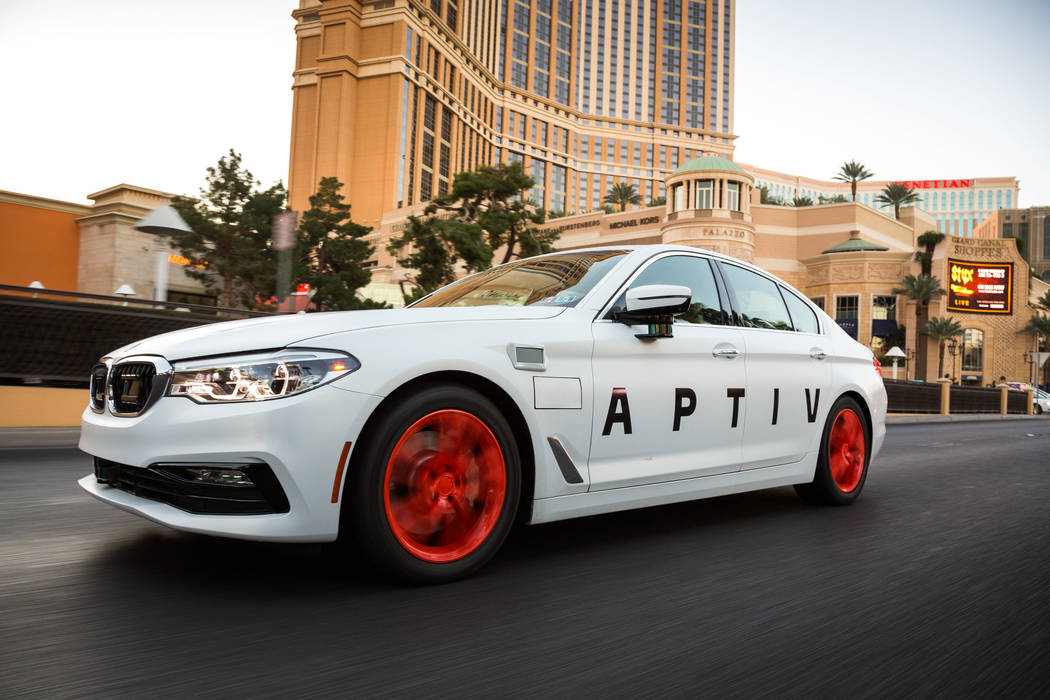 The APTIV vehicle with autonomous technology drives on the strip Friday, December 1, 2017 in Las Vegas, Nevada. (Photo by John F. Martin for APTIV) 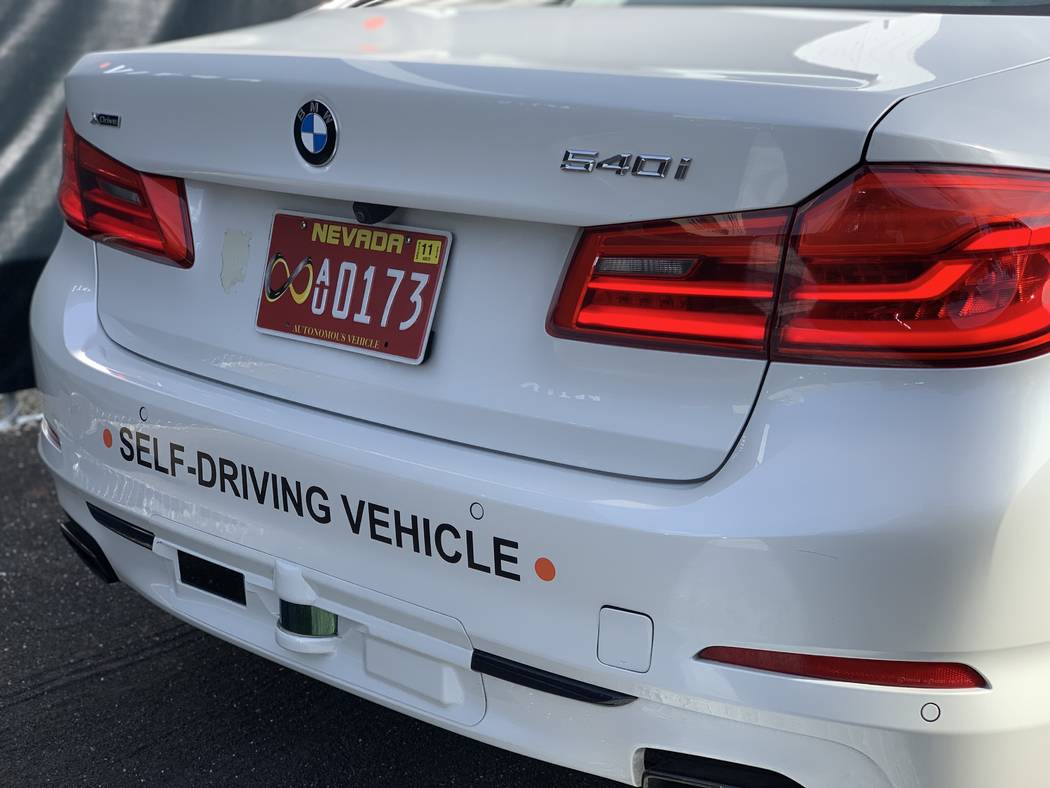 The Aptiv self-driving BMW on the Lyft platform features two LiDAR sensors, one short-range and one long-range on the rear bumper. (Mick Akers/Las Vegas Review-Journal) 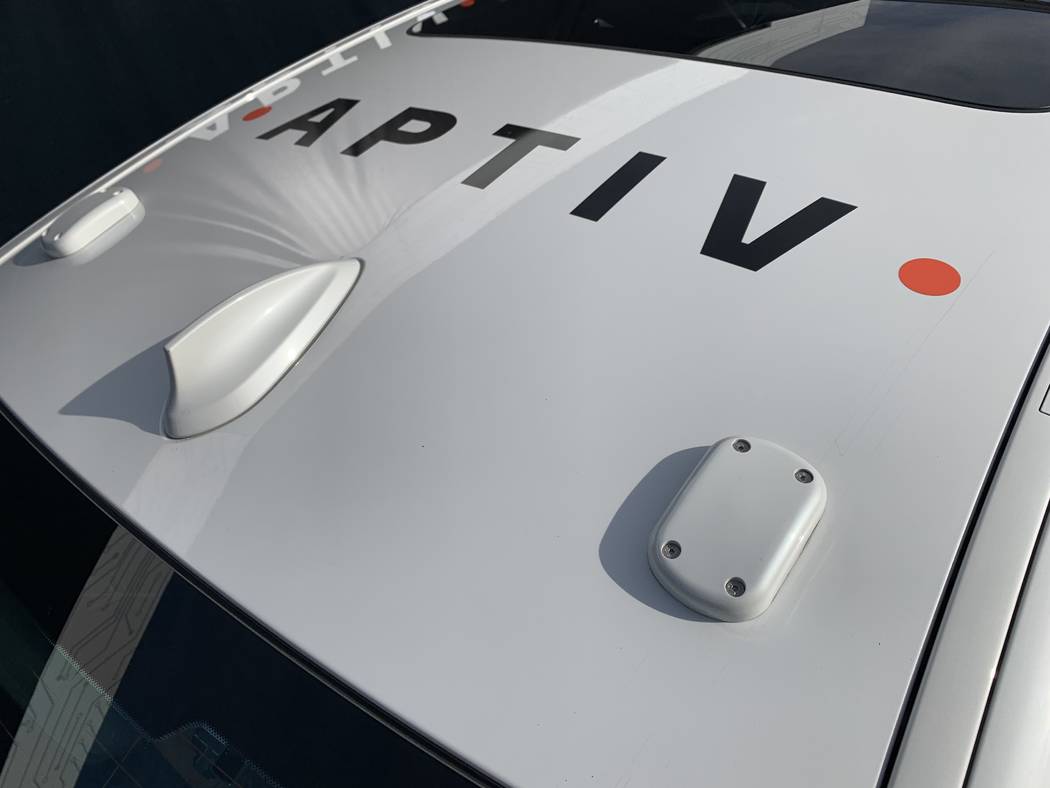 The Aptiv self-driving BMW on the Lyft platform features two GPS sensors and a dedicated short-range communications antenna on the roof of the vehicle. (Mick Akers/Las Vegas Review-Journal) 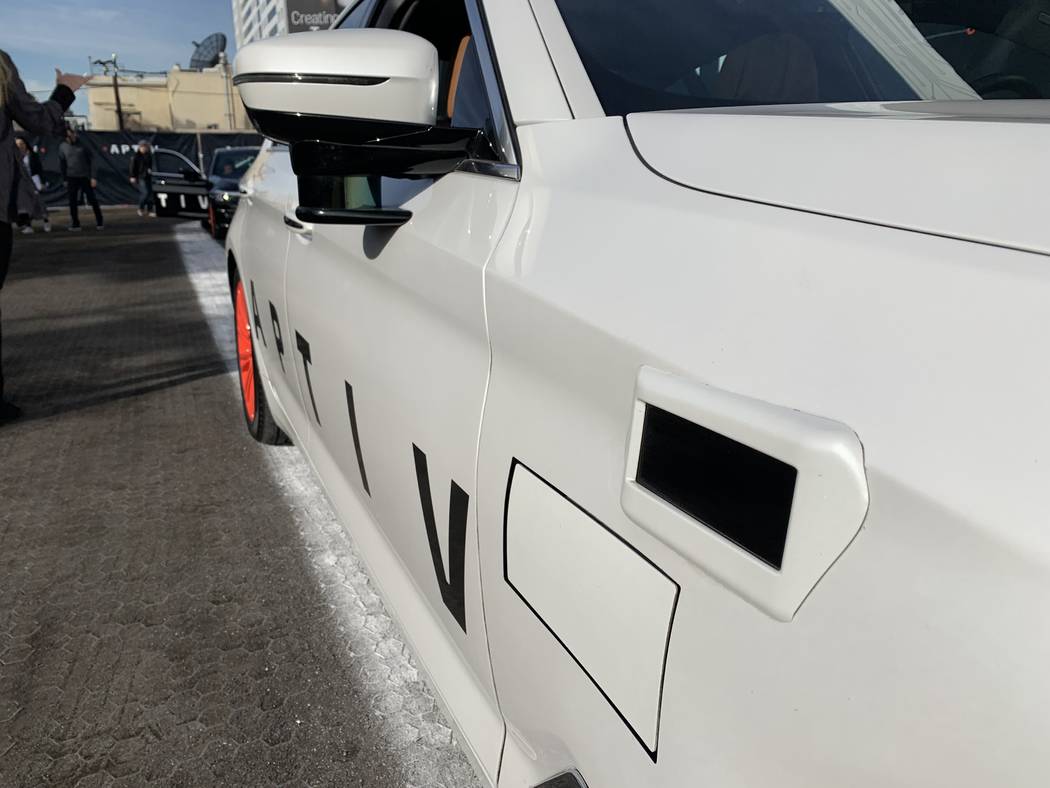 The Aptiv self-driving BMW on the Lyft platform features a short-range LiDAR radar on the side view mirror, an electronically scanning radar and a long-range LiDAR above the front wheel well of the vehicle. (Mick Akers/Las Vegas Review-Journal) 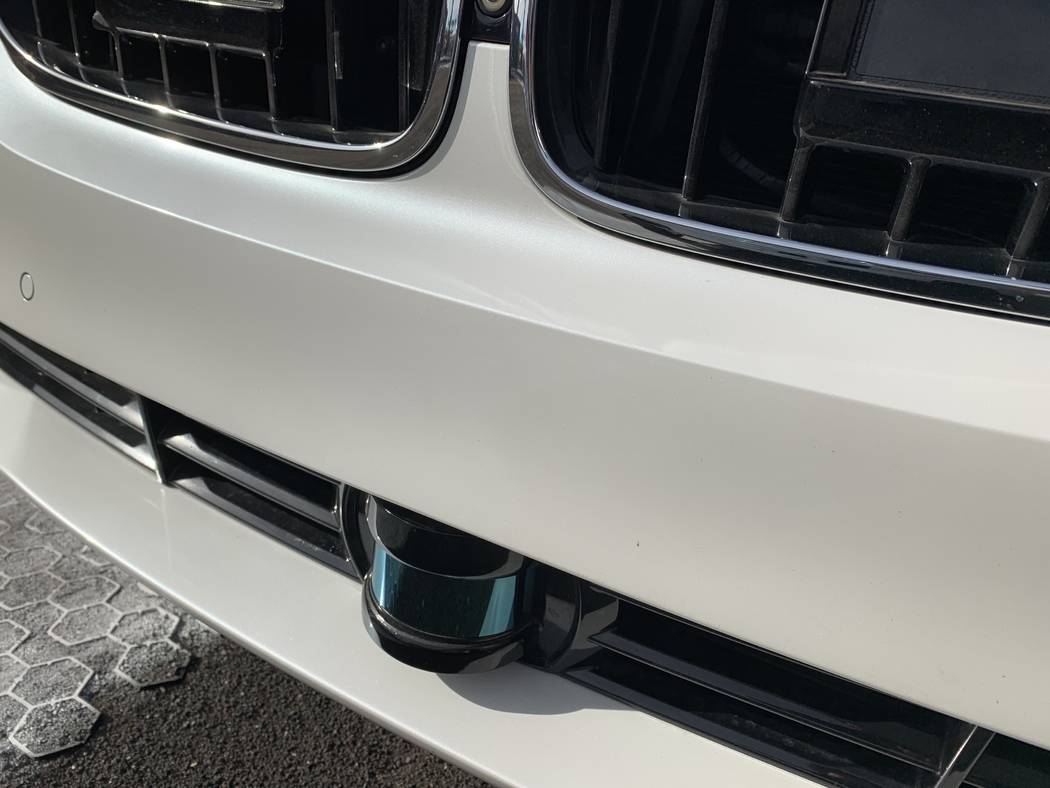 Aptiv’s fleet of 75 self-driving vehicles have been navigating their way around Las Vegas streets for the better part of the past year and have been learning as they go.

Motorists may notice 30 of the fleet, BMW 5 series cars decked out in Aptiv’s logo. They are part of a partnership with ride-hailing giant Lyft, rolling up and down Las Vegas Boulevard.

The two companies linked up and started offering rides in May after test drives at CES 2018, and they surpassed the 30,000-ride mark during CES 2019, according to Abe Ghabra, managing director of Aptiv-Las Vegas.

The cars pick up and drop off riders at 37 ride hubs along the Strip, in downtown Las Vegas and at the Las Vegas Convention Center, providing customers access to over 1,600 retail, dining and entertainment locations.

A hub is considered a major casino or location where passengers have access to hundreds of businesses.

“Basically, if you’re a Lyft passenger, a self-driving car can take you where you want to go,” said Jody Kelman, director of the self-driving platform for Lyft. “This is not a carnival ride; this is a real-world-use case. (If) you’re with your bachelorette party at The Cosmopolitan and you want to get down to the Wynn for dinner, you can take an autonomous Aptiv car instead of a traditional Lyft.

“We want to take the self-driving platform to where it doesn’t feel futuristic but it feels like something that is happening today.”

It appears that their goal is taking shape, with riders taking Aptiv vehicles multiple times in some cases. One rider just took his 14th ride in one of the BMWs.

Others are seeking out the autonomous vehicles to scratch the experience off their life-experience checklist.

“We had one man send a lengthy letter to us about the three things on his bucket list” Kelman said. “One was to marry his now-wife, one was to go sky diving and the last was to take a ride in an autonomous vehicle. In taking his Lyft ride in Las Vegas, he checked the last thing off his bucket list.”

Each vehicle in the Lyft network is on the road 20 hours a day, seven days a week and has a safety driver behind the wheel and an engineer in the passenger seat monitoring the system at all times.

The vehicles are in autonomous mode until they enter a property, where the safety driver takes the wheel until they are back on public roads.

As of May, Aptiv autonomous vehicles had been in two crashes, according to Aptiv, both minor and the fault of the driver of other car involved. Requests to obtain updated crash info from Aptiv ahead of publication were unsuccessful.

Aptiv vehicles not involved in the Lyft program receive new programming ahead of the Lyft vehicles for testing without customers inside. Any new improvements to the platform’s software are tested first in simulation and then at an undisclosed location north of Las Vegas before the cars are deployed on valley roads.

“It takes about a month for the new software ran in the non-Lyft fleet vehicles before it’s deployed on the Lyft network,” Ghabra said. “We’re constantly making the software better, but it takes a lot of testing before we make it available on the Lyft cars.”

Aptiv’s commercial autonomous vehicle center, which opened last month, is one of three company hubs in the U.S. The 130,000-square-foot Las Vegas facility allows Aptiv staffers to monitor each vehicle on the road in real time and tap into their sensors and cameras at any given time.

“When people get into these cars, they really start to trust the technology,” Kelman said. “At first they pay attention to the screen monitoring the vehicle’s surroundings dramatically for up to the first minute, but then they go back to looking at their phones.”

The vehicles are “learning” and have begun to operate more smoothly and smartly since their debut at CES 2018.

“You see that we were approaching the stopped bus and we shifted lanes,” Ghabra said as the autonomous BMW navigated around a bus waiting at a stop in front of Wynn Las Vegas. “Last year, we would have likely waited behind the bus until it started to move again.” 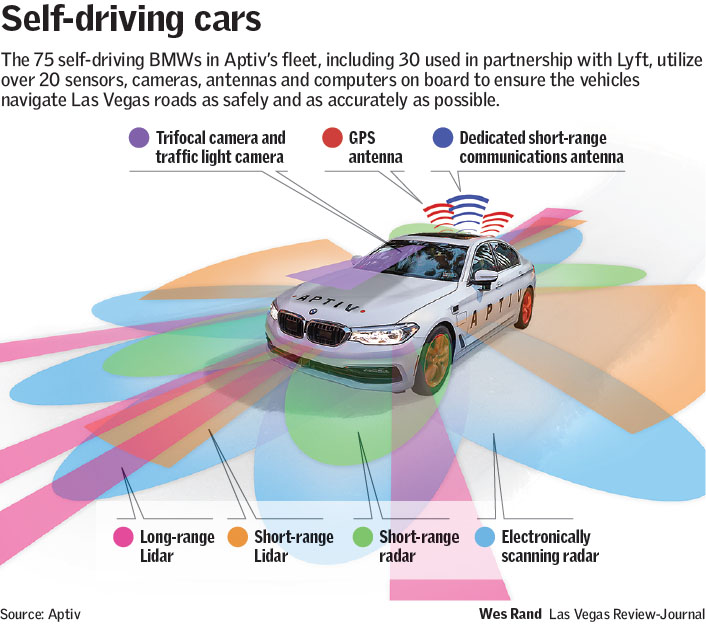 Lidar is a detection system that uses radar and a laser light to determine the distance to a target, which can then be mapped out as a 3D model. Short-range radar has longer-range capabilities and can perform better in adverse conditions like fog or smoke, while lidar has higher resolution and is more accurate than radar.

Having both ensures that the vehicle is well-equipped to work at an optimal level, no matter what scenario it encounters.

Each Aptiv vehicle in the Lyft program has three antennas on the roof: two for GPS and one dedicated to short-range communications.

Each vehicle is outfitted with a traffic light camera that relays whether lights are green, yellow or red and one trifocal camera that analyzes road conditions and observes perception and distant-range detection.

Each vehicle has a pair of computer stacks on board, located behind the back seats, for safety and redundancy. The computers feature the Control-Tec CT-Edge data communications system, which helps the vehicles transmit and store data.