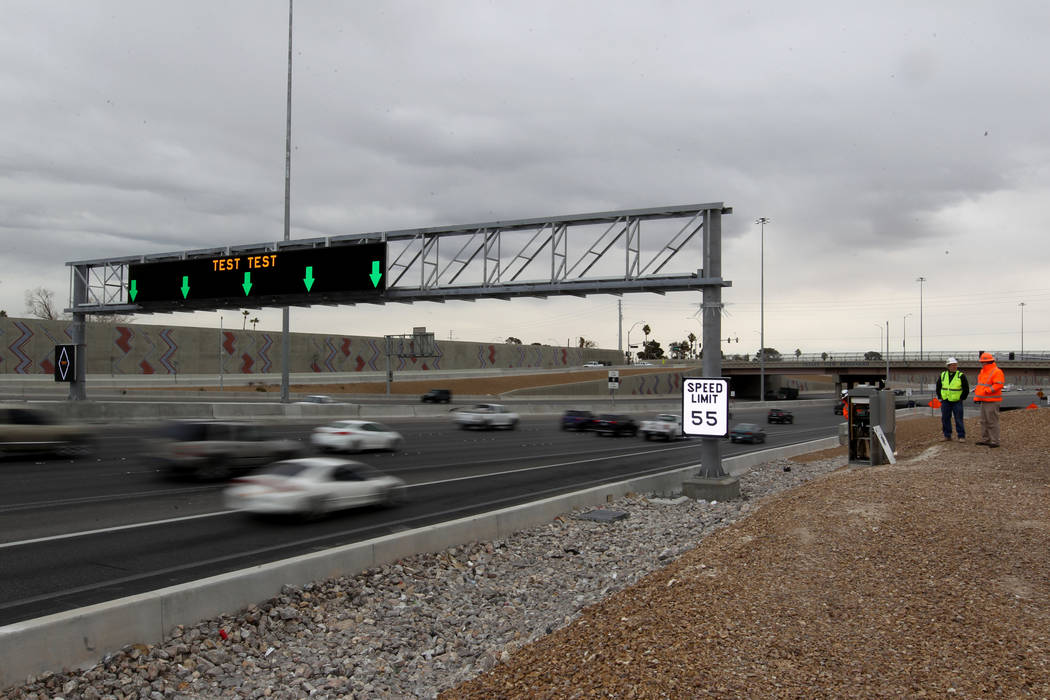 A stretch of U.S. Highway 95 in Las Vegas will again be closed to traffic Tuesday night for Project Neon-related work after two weather delays.

U.S. 95 southbound will shut to traffic between 10 p.m. and 5 a.m. Wednesday at Martin Luther King Boulevard, the Nevada Department of Transportation announced Monday.

The temporary closure is needed to adjust the overhead digital messaging sign to align with new freeway lane striping as part of Project Neon. The third-consecutive overnight closure of the highway is required for crews to complete the work that began Sunday night and was delayed twice by a passing weather system, according to Tony Illia, transportation department spokesman.

Although it has been too windy to use the hydraulic mobile crane to lift the dynamic messaging sign Sunday and Monday nights, crews have been carrying out other work related with the project to ensure the closures didn’t go to waste, Illia said.

Last night’s closure of U.S. 95 southbound at Martin L. King has been rescheduled for tonight due to high winds. The closure will be in place from 10 pm until 5 am. Details at https://t.co/KUfFaqPKVN. #SeeingOrangeNV pic.twitter.com/CofszWHM2W

In total 42 active traffic management signs were installed on portions of U.S. 95 and I-15 during the nearly $1 billion Project Neon, the 4-mile-long upgrade of I-15 from the U.S. 95 interchange to Sahara Avenue that finished last summer.

Monday marked the start of the final implementation of the dynamic digital signs, which were slated to go live late last year but were delayed due to bad fiber network patches.

Digital speed limit signs on the right side of roadway and digital high occupancy vehicle signs to the left are fully lawful and enforceable traffic controls, NDOT said.

If the signs go dark, the enforced speed limit reverts to the last posted static speed limit sign, according to NDOT.

Once testing is complete, the full-color LED overhead signs will provide real-time driving information about planned and unplanned incidents, speed limit changes and lane use control.

The ability for real-time changes improves safety and traffic flows by reducing differential travel speeds and the likelihood of secondary crashes for enhanced operational efficiency.

The entire sign network is anticipated to be fully operational in March.