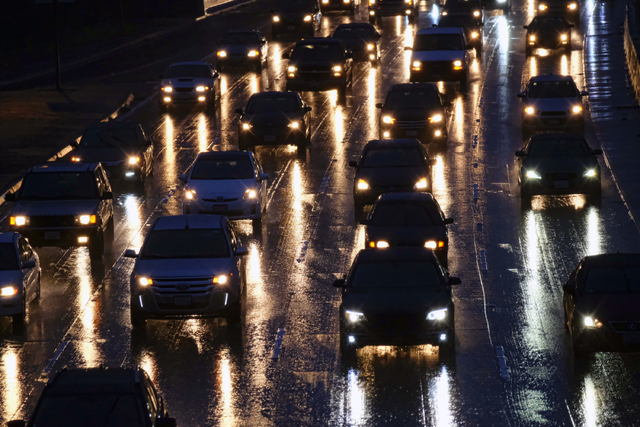 Early morning rush hour traffic crawls along the Hollywood Freeway near downtown Los Angeles on Thursday, Jan. 12, 2017. Flooded roads and freeways along with low fog and clouds made for a hazardous commute Thursday as another round of heavy rain moved through Southern California, raising fresh fears of possible mudslides in wildfire burn areas. (AP Photo/Richard Vogel) 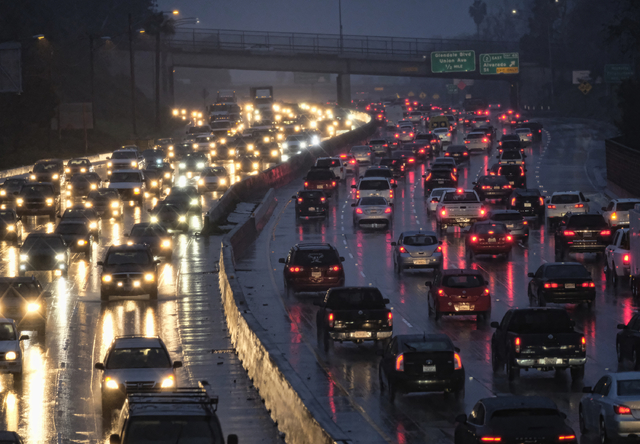 Early morning rush hour traffic crawls along the Hollywood Freeway on it's way toward downtown Los Angeles on Thursday, Jan. 12, 2017. Flooded roads and freeways along with low fog and clouds made for a hazardous commute Thursday as another round of heavy rain moved through Southern California, raising fresh fears of possible mudslides in wildfire burn areas.(AP Photo/Richard Vogel)

The odds of sitting in traffic are pretty low in Las Vegas compared to many of the world’s largest cities.

The average driver spent 21.6 hours sitting in traffic during peak commuting times all of last year in Las Vegas, ranking 333rd out of 1,064 cities around the globe, according to a report released Monday by Inrix, a transportation analysis company in Kirkland, Washington.

Perhaps not surprisingly, the world’s most congested roads are in Los Angeles, where commuters spent about 104 hours during peak traffic times in 2016. Moscow drivers came in second with 91 hours spent in traffic, followed by New York commuters with 89 hours, according to the traffic scorecard compiled by Inrix.

Las Vegas ranked as the 52nd most congested city in the U.S. Being stuck in traffic cost the average Las Vegas driver $1,022 last year and roughly $715 million combined for the region, Inrix found.

The national average for sitting in traffic cost the average commuter $1,400 and nearly $300 billion combined for all drivers in the United States, the study said.

“A stable U.S. economy, continued urbanization of major cities, and factors such as employment growth and low gas prices have all contributed to increased traffic in 2016,” said Bob Pishue, senior economist at Inrix, said in a prepared statement.

“Congestion also costs our country hundreds of billions of dollars, threatens future economic growth and lowers our quality of life,” Pishue said. “The demand for driving is expected to continue to rise, while the supply of roadway will remain flat.”