Commuters feeling bruised by the “Main Event“ should brace for a pummeling anticipated this weekend when an entire section of U.S. Highway 95 will close in downtown Las Vegas.

Both directions of U.S. 95 will close to through traffic between Martin Luther King and Las Vegas boulevards from 10 p.m. Friday to 5 a.m. Monday, said Tony Illia, a spokesman for the Nevada Department of Transportation.

Martin Luther King and Las Vegas boulevards immediately surrounding U.S. 95 also will close to through traffic during that time.

However, all Spaghetti Bowl ramps will remain open, Illia said, because there will be enough separation between motorists and the construction zone. 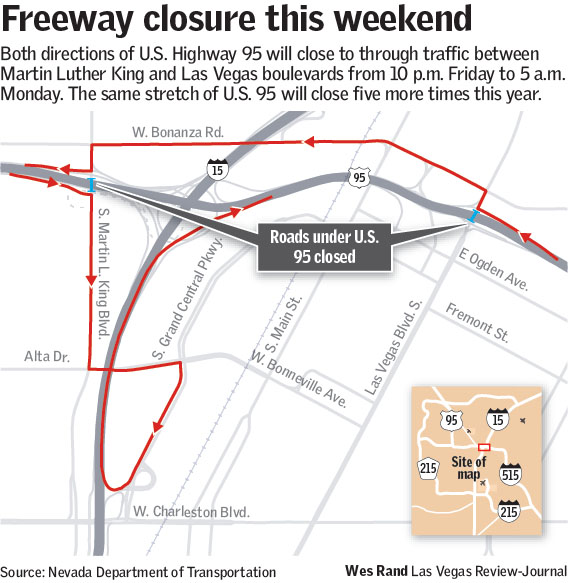 The work is needed so crews can demolish some freeway bridges along southbound Interstate 15 as part of Project Neon, the $1 billion widening of I-15 between the Spaghetti Bowl and Sahara Avenue.

This weekend marks the first of six full closures for U.S. 95 slated for this year, with others anticipated in April, May, July, August and September, Illia said.

“This is critical, necessary work for the future mobility of Southern Nevada,” Illia said. “This corridor is already the busiest in the state, and traffic is expected to double during the next 20 years.”

More immediately, NDOT is still rolling out long-term closures associated with the Main Event, marking the third and “most impactful” round of restrictions surrounding the Spaghetti Bowl.

Crews on Wednesday night were set to close the D Street onramp to southbound I-15 through mid-July. By Thursday morning, I-15 will be narrowed to two traffic lanes between D Street and Alta Drive through Nov. 20.

Additionally, Illia said, detour signs were adjusted Tuesday night in response to complaints from confused commuters who were unaware of a temporary, single-lane ramp linking southbound U.S. 95 to southbound I-15. The old ramp leads only to Martin Luther King.