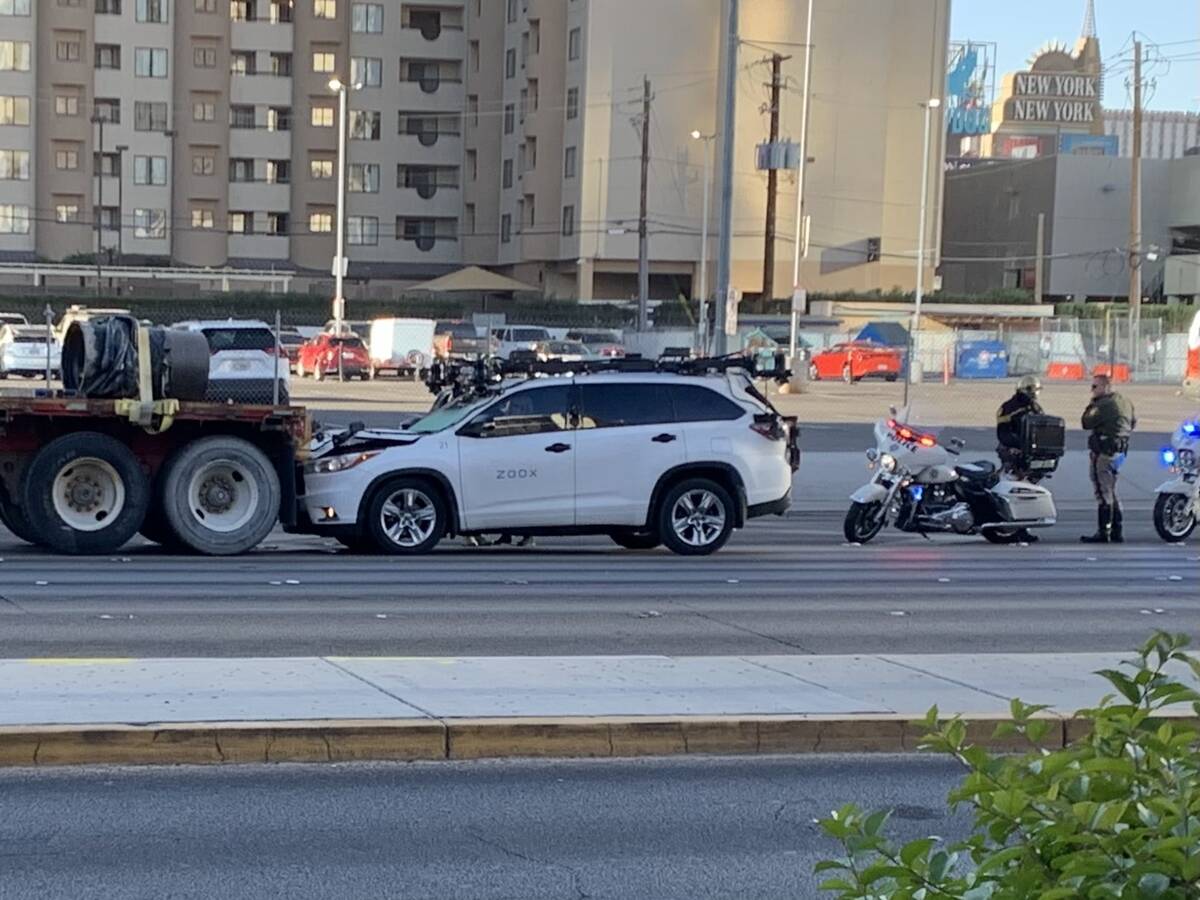 A Zoox fully autonomous vehicle was involved in a crash with a tractor-trailer on Harmon Avenue just east of Las Vegas Boulevard on Monday, Nov. 14, 2022. (Phil Olbrechts)

A vehicle that is part of a self-driving pilot program was involved in a crash Monday just off the Las Vegas Strip.

A 2016 Toyota Highlander outfitted with fully autonomous driving technology and operated by California-based Zoox was traveling eastbound on Harmon Avenue when it rear-ended a tractor-trailer owned by Las Vegas Paving near Planet Hollywood Resort, according to the Metropolitan Police Department.

The Las Vegas Review-Journal was provided a photo of the incident by reader Phil Olbrechts. The photo shows a white Highlander with Zoox’s logo on it crashed into the rear of a tractor-trailer with Metro officers on the scene.

The crash report noted the safety driver behind the wheel of the Highlander at the time of the crash told police she expected the vehicle to stop on its own as it approached the truck in front of her.

“(She) stated that she got confused and did not know what happened but thought that the vehicle was going to stop on its own and that she was too close when she realized it wasn’t going to stop,” the incident report states.

The police report states the driver of the Highlander said she was in control of the vehicle, while at the same time stating her expectations for the SUV to stop on its own.

The investigating officer noted there were no visible skid marks at the crash site.

Melissa Marasco, a spokeswoman for Amazon-owned Zoox, said the company is aware of the incident, but she didn’t offer further details about whether the vehicle was in autonomous mode at the time of impact.

“We are currently conducting our own internal investigation about the incident, and do not have any information to share at this time,” Marasco said in an email.

There were no injuries reported to the Zoox safety driver or the two occupants of the Las Vegas Paving vehicle as a result of the crash.

The safety driver was cited by Metro for failure to reduce speed/failing to use due care.

Zoox has been operating in Las Vegas since 2019. The company also has self-driving testing operations in San Francisco and Seattle.

The purpose of the testing is to map the cities where the vehicles operate and to test and validate their autonomous technology, according to Zoox’s website.

The website highlights that safety drivers are always in place while the vehicle is operating autonomously.

Last year Zoox announced it was overhauling its planned robotaxi vehicle in hopes of launching a commercial ride hailing service based on the testing the company was carrying out in Las Vegas.