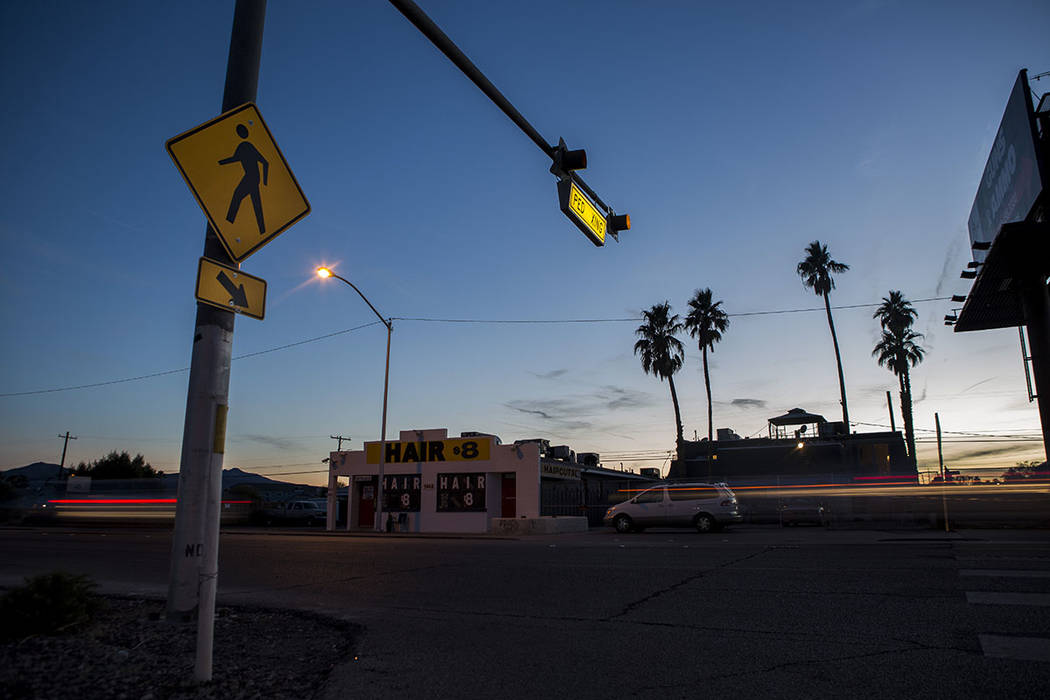 Cars drive by a crosswalk at the intersection of Whitney Avenue and Boulder Highway in Las Vegas on Wednesday, Jan. 24, 2018. The Nevada Department of Transportation plans to spend $2 million for improvements to pedestrian safety along Boulder Highway. (Las Vegas Review-Journal @PConnPie)

Adapting road infrastructure to make streets safe for all users is the first step to reducing traffic fatalities, officials said at a forum Thursday.

UNLV Traffic Safety Coalition coordinator Erin Breen pointed to the zero pedestrian fatalities that have occurred since flashing pedestrian signs were installed along Boulder Highway, previously one of the deadliest roads for pedestrians in the state, as an example.

“If you fix a road for pedestrians, you make that a safer road for everyone using it,” Breen said.

Traffic fatalities in the county have fluctuated over the past five years, but they have increased overall, from 190 in 2013 to about 226 in 2018. Department of Public Safety spokesman Andrew Bennet said the 2018 figure has yet to be confirmed.

Bennet said 94 percent of the fatalities resulted from crashes caused by preventable behaviors, such as impaired driving, speeding and unawareness of pedestrians.

He said this is promising for the county’s goal of zero fatalities, but he added that road infrastructure and law enforcement remain the primary lines of defense in preventing fatal crashes.

County Commissioner Michael Naft said private engineers and public works staff “are integral to figure out how we can design safer, smarter roads that benefit both people looking to drive around and walk around our valley.”

Craig Raborn, director of metropolitan planning at the Regional Transportation Commission, said an infrastructural program called Complete Streets has been implemented in some parts of the valley and is looking to expand. The project aims to design streets that serve all users, from cars to pedestrians, “safely and effectively.”

One law enforcement initiative in place to curb traffic fatalities is the DUI Strike Team involving officers from the Nevada Highway Patrol and the Metropolitan Police Department. The team has made over 700 impaired driving arrests since its inception in October 2017.

Metro Deputy Chief Andy Walsh emphasized the importance of “community policing,” which incorporates residents in the enforcement process by encouraging responsibility of their own driving practices and reporting unsafe drivers.

“We all owe it to ourselves to make sure this is a safe place for all of us to live and raise our children,” Walsh said. “The police department has to work in partnership with the community to solve this problem.”

Jose and Briejet Echenique, whose 8-year-old son was killed when an impaired driver crashed into their car in August, attended the forum and reinforced the importance of educated drivers who are conscious of their speed and surroundings.

But the most important deterrent, they argued, is a more severe sentence — like the one handed down to the woman who drove into their car. She was convicted of second-degree murder and will spend up to 65 years behind bars.

“What I’m praying for is this becomes a standard,” Jose Echenique said. “Maybe then drivers will think twice.”