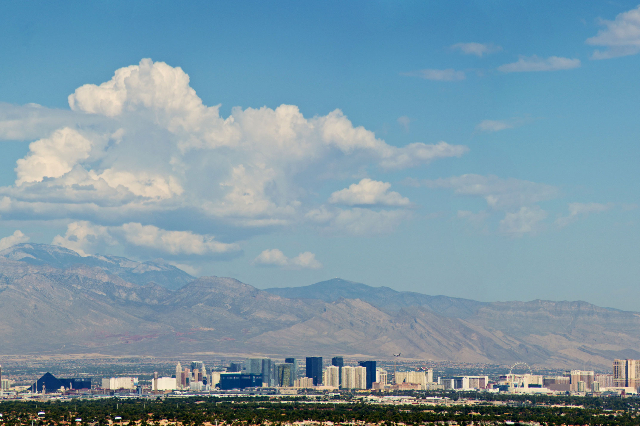 Clouds are seen above the Las Vegas Strip and the Spring Mountains. (Daniel Clark/Las Vegas Review-Journal)

The Las Vegas Valley says goodbye to the blistering heat of summer today with a high of 92 degrees and a 71-degree low, according to the National Weather Service.

Meteorologist Chad Shafer said the last weekend of summer will be suitable for any kind of outdoor activity.

“It’ll still be warm, but not excessively so,” he said.

Saturday heats up just a few notches with a high of 96 degrees and a drier climate. Winds will be light around the valley as the temperature dips to a low of 73 degrees.

A high of 98 and a low of 75 is expected for Sunday, according to the weather service.

Early next week is when things start to get interesting, Shafer said.

Temperatures should only reach the mid-80s as the valley officially transitions from the summer season into fall on Wednesday.

But there are some early signs of widespread precipitation for Monday night to Wednesday as the weather starts to cool down with an expected increase of cloud coverage, Shafer said. There’s a 50 percent chance for rain on Tuesday, he said.

Forecasters say it’s too early to tell whether the valley will see a storm.

“One of those days could be a heavy rain maker,” meteorologist Clay Morgan said. He noted that 0.57 inches of rain were measured at McCarran International Airport on Aug. 13, the last time the valley had a heavy amount of rain in one day.

“There’s a 50 percent chance it will be wetter than that one of those days,” Morgan said.