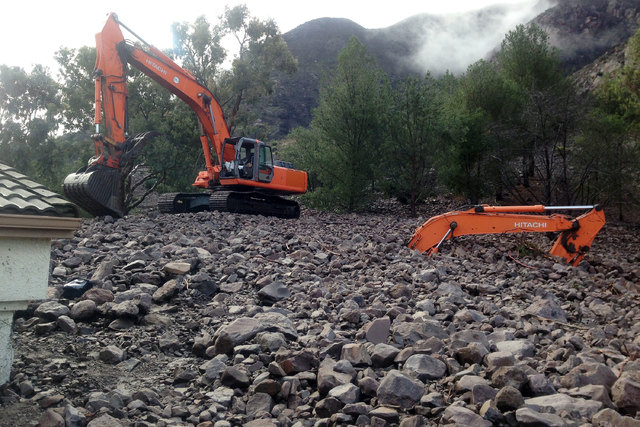 Earth-moving equipment is buried by debris in Camarillo Springs, Calif., about 50 miles northwest of Los Angeles on Friday, Dec. 12, 2014. The homeowners association hired a construction crew to move debris, but the muck buried one of the earth movers as a powerful storm moved through the area. (AP Photo/Raquel Dillion) 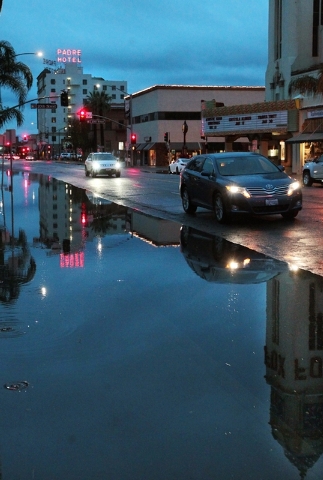 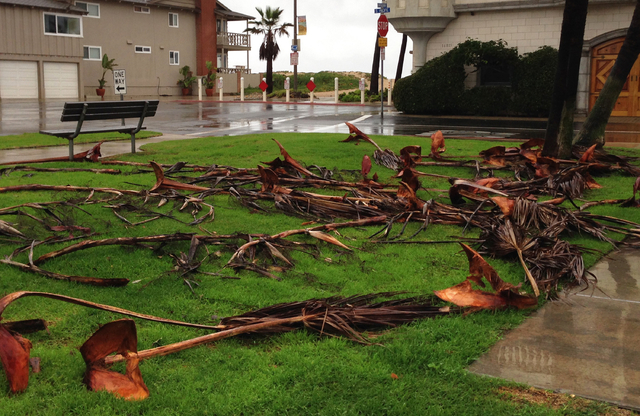 Palm fronds torn from trees by a storm sweeping through Southern California lie on the ground at Sunset Beach on Friday, Dec. 12, 2014. A dangerous storm system blamed for two deaths in Oregon, thousands of power outages in Washington and flooded roadways in the San Francisco Bay Area pushed into Southern California on Friday, causing mudslides and evacuations. (AP Photo/Michael R. Blood) 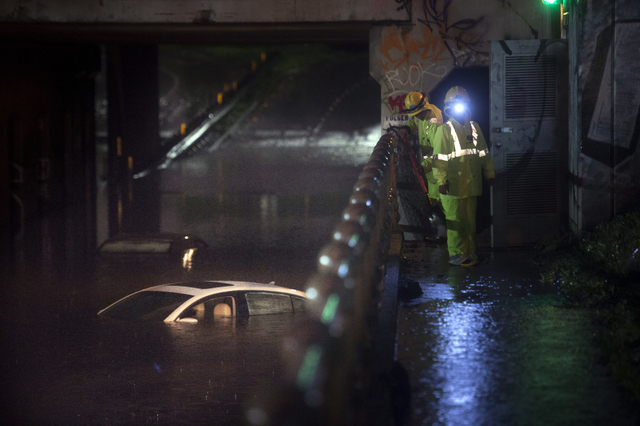 Water covers one of several vehicles stranded in an Ashby Ave. in Berkeley, Calif., on Thursday, Dec. 11, 2014. A powerful storm churned through Northern California Thursday, knocking out power to tens of thousands and delaying commuters while soaking the region with much-needed rain. (AP Photo/Noah Berger) 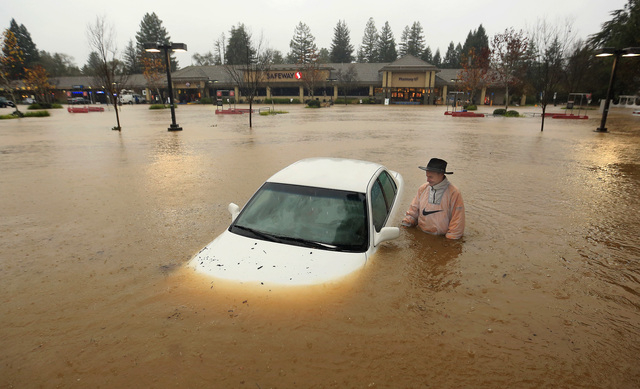 A resident of Guerneville, Calif., who parked his car overnight in the Safeway parking lot on Vine Street in Healdsburg, Calif., finds it nearly submerged as Foss Creek topped its banks, Thursday morning, Dec. 11, 2014. A powerful storm churned down the West Coast Thursday, bringing strong gales and much-needed rain and snow that caused widespread blackouts in Northern California and whiteouts in the Sierra Nevada. (AP Photo, The Press Democrat, Kent Porter) 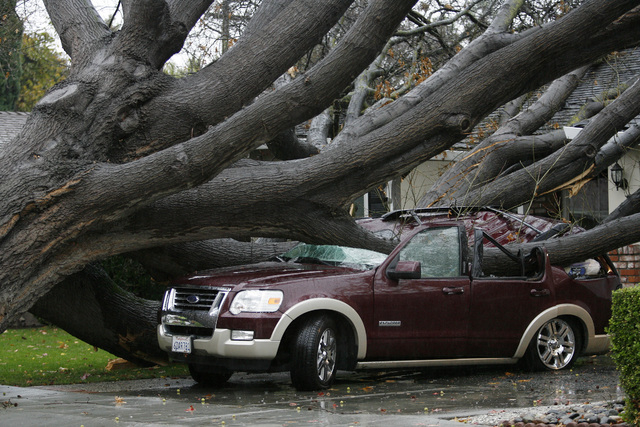 An SUV is crushed by a large oak tree during a storm in San Jose, Calif., on Thursday, Dec. 11, 2014. No injuries were reported. A powerful storm churned through Northern California Thursday, knocking out power to tens of thousands and delaying commuters while soaking the region with much-needed rain. (AP Photo/Bay Area News Group, Gary Reyes) 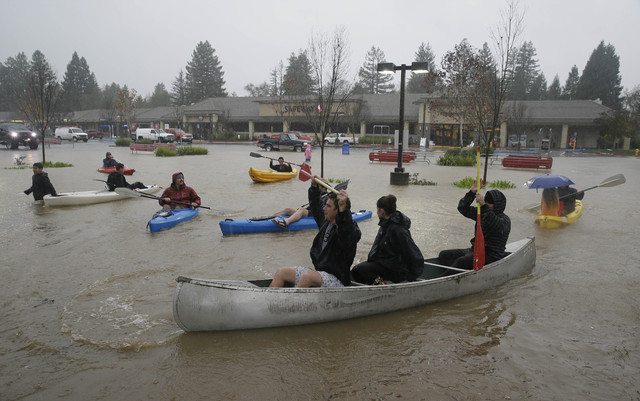 People use kayaks and a canoe to make their way around a flooded parking lot at a shopping center Thursday, Dec. 11, 2014, in Healdsburg, Calif. A powerful storm churned through Northern California Thursday, knocking out power to tens of thousands and delaying commuters while soaking the region with much-needed rain. (AP Photo/Eric Risberg) 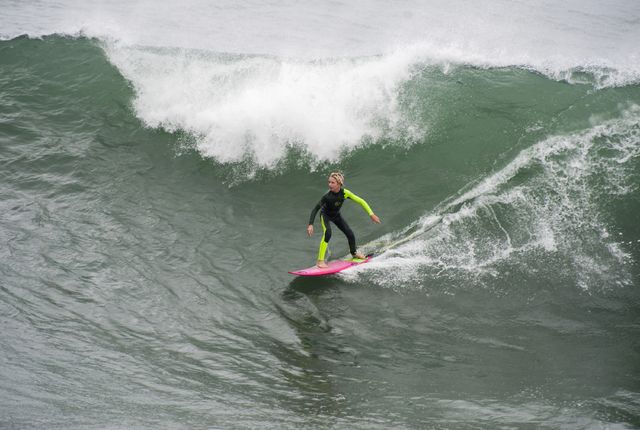 A young surfer catches one of the bigger waves in the morning in Huntington Beach on Thursday morning Dec. 11, 2014. A powerful storm churned down the West Coast on Thursday, bringing strong gales and much-needed rain and snow that caused widespread blackouts in Northern California and whiteouts in the Sierra Nevada. (AP Photo/The Orange County Register, Michael Goulding) 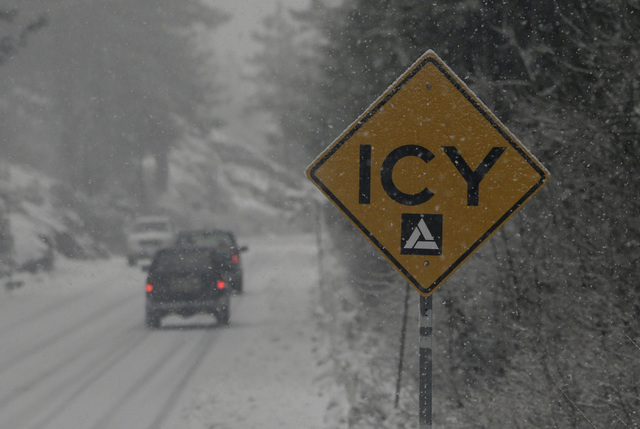 A sign warns drivers of the road conditions on Donner Pass Road near Soda Springs, Calif., Thursday, Dec. 11, 2014. Several inches of snow from a severe storm that swept through Northern California fell in the Sierra Nevada forcing drivers without four-wheel drive vehicles to put on chains before crossing over Donner Summit. (AP Photo/Rich Pedroncelli) 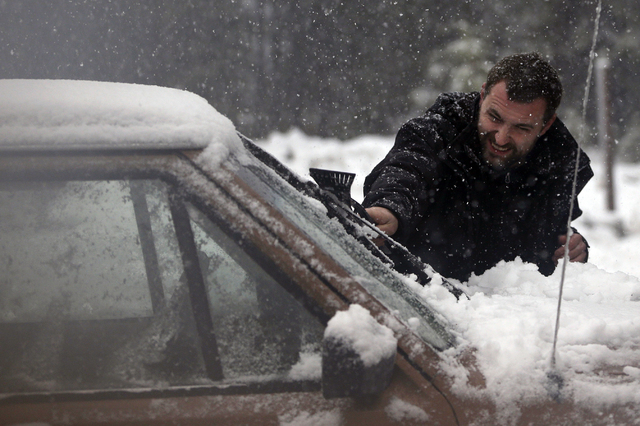 Matthew Hazard cleans snow from his vehicle after several inches fell in Soda Springs, Calif., Thursday, Dec. 11, 2014. Snow from a severe storm that swept through Northern California fell in the higher elevations of the Sierra Nevada forcing drivers without four-wheel drive vehicles to put on chains before crossing over Donner Summit. (AP Photo/Rich Pedroncelli)

A powerful squall line led the storm’s pre-dawn charge, lashing the region with wind-driven rain. Rain fell at the rate of 1 to 2 inches an hour, triggering flash flooding, the National Weather Service said. The main front followed with rain falling at rates of a tenth to about a third of an inch per hour.

Mudflows in two areas stripped bare by wildfire forced people from their homes.

Mandatory evacuations were ordered for 124 homes in Camarillo Springs, about 50 miles northwest of Los Angeles, Ventura County sheriff’s Capt. Don Aguilar said. He said there was some damage from a mudflow, but officials were assessing its scope. Some people needed help leaving because of property damage, but no injuries were reported in the area burned by a blaze last year.

Forty people displaced by the mudslide came to an evacuation center, and two were taken to the hospital, Red Cross spokesman Tom Horan said. Their medical issues weren’t serious, he said.

Farther east in the Los Angeles suburb of Glendora, the site of the devastating Colby Fire in January, a debris flow was sending rocks the size of golf balls and bricks down streets, police Lt. Matt Williams said. Five people were using an evacuation center but the exact number of people who fled their homes isn’t yet known, he said. No injuries or damage to homes were immediately reported.

Possible slides in the neighboring city of Azusa on the foothills of the San Gabriel Mountains led to some evacuations.

In Orange County, sheriff’s deputies went door to door before dawn to tell residents of fire-scarred Silverado Canyon to evacuate because of rainfall predictions.

The storm’s powerful winds caused power outages around Santa Barbara and other parts of the coast, and forecasters predicted the winds would pick up speed.

Denise George, who sells boats in Marina del Rey, said that was her main worry.

“We make sure the halyards are secure, the canvases are fastened so nothing gets blown off or opened up, so yes, we are battening down the hatches, for sure,” George said.

On Thursday, the center of the storm and its torrential rains hit the San Francisco Bay Area and the surrounding region, pushing waterways toward flood stage, toppling trees and cutting power to thousands.

In Oregon, the winds proved deadly. A falling tree killed a homeless man who was sleeping on a trail, and a teenage boy died after a large tree fell on the vehicle in which he was riding, causing it to swerve and hit another tree.

Falling trees also injured a man in southwest Washington and a sixth-grader at an elementary school in Santa Cruz, California.

This Pineapple Express storm carried warm air and vast amounts of water in a powerful current stretching from Hawaii to the West Coast and up into the mountains, where gusts up to 140 mph blew through passes.

Waves slammed onto waterfronts around the Bay Area, ferries were bound to their docks, airplanes were grounded and many schools and businesses told people to stay home. There were multiple accidents on flooded roads Thursday, and several trees crunched cars.

Sonoma County authorities recommended that hundreds of people evacuate at least 300 homes in the lowest lying areas near the Russian River. Peak flooding in the towns of Guerneville and Monte Rio was anticipated by 10 a.m. Friday, forecasters said.

Authorities warned of minor flooding along the Sacramento River in Tehama County and Cache Creek in Yolo County.

Teenagers drove trucks through a flooded Safeway parking lot to make waves for kayakers in Healdsburg as grocery shoppers trudged through several feet of water to get supplies.

Ski resorts in the northern Sierra Nevada were hoping for 3 feet of snow once it all settles.

While rains were expected to continue through Friday evening across much of California, farmers will need more storms this size to even begin to recover from a record drought.