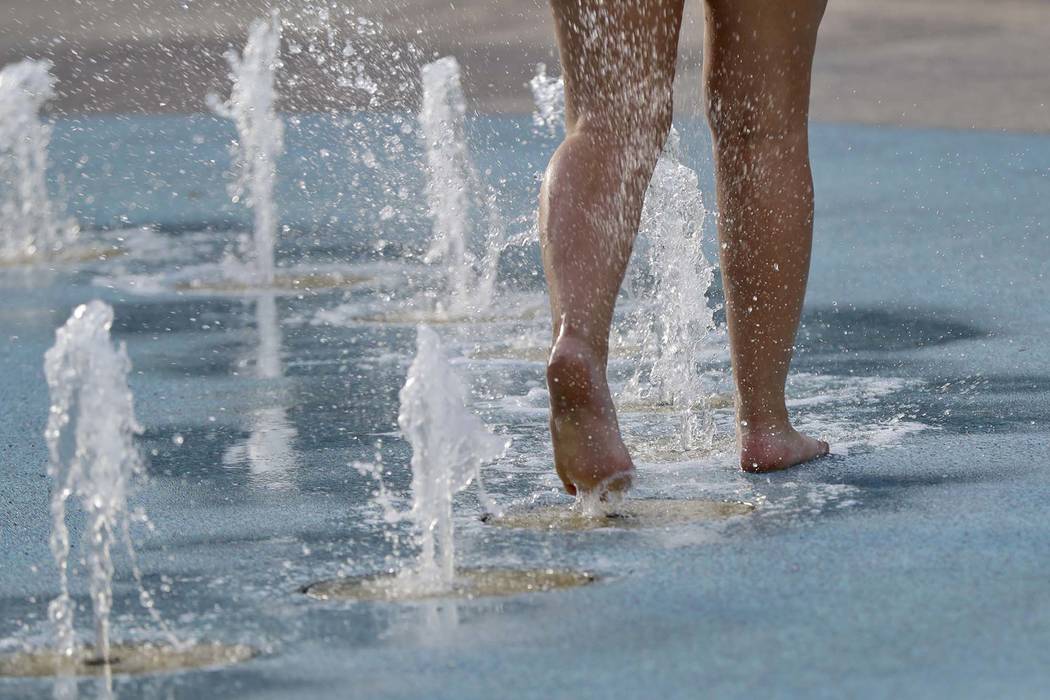 Taylor Jeremiah cools off while walking through a fountain early Monday, July 23, 2018, in downtown Phoenix. Parts of Arizona and the Southwest are bracing for the hottest weather of the year with highs this week expected to approach 120 degrees. (AP Photo/Matt York) 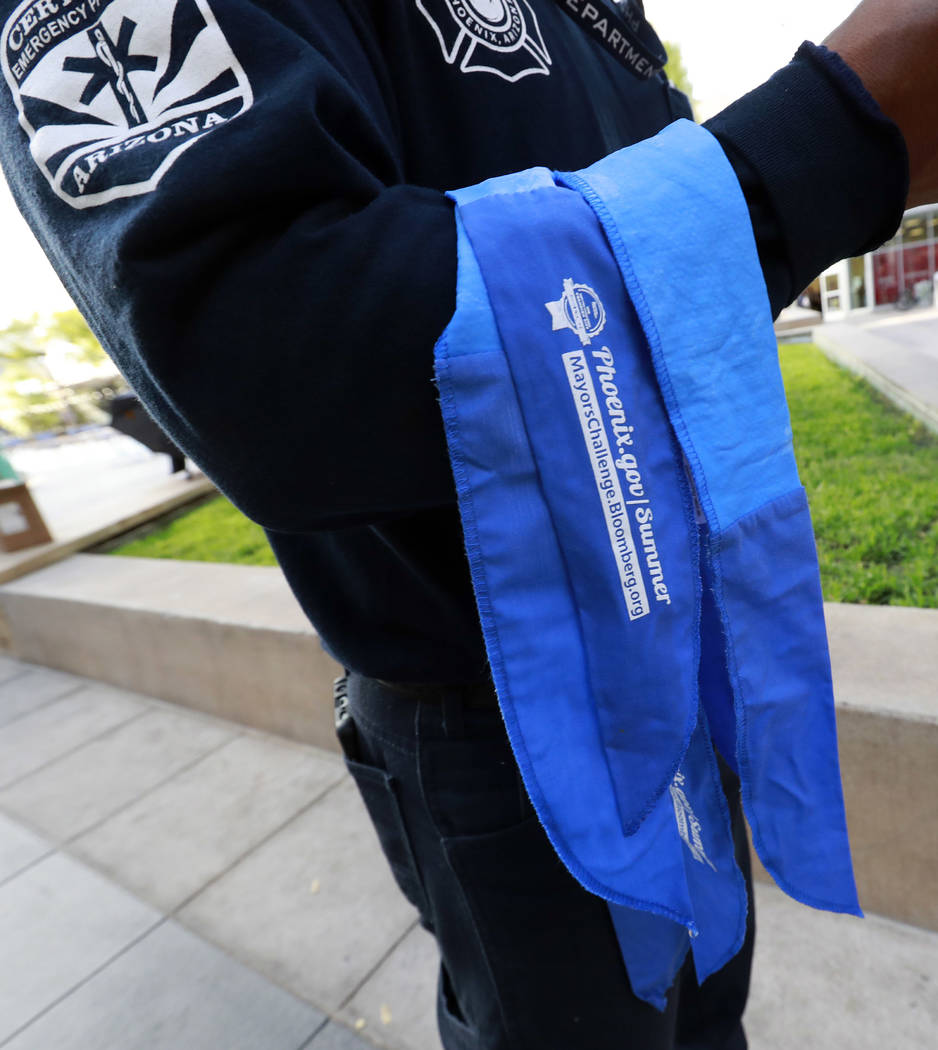 Phoenix firefighter Juan Rodriguez hands out cooling neckerchiefs to morning commuters early Monday, July 23, 2018, in downtown Phoenix. Parts of Arizona and the Southwest are bracing for the hottest weather of the year with highs this week expected to approach 120 degrees. (AP Photo/Matt York) 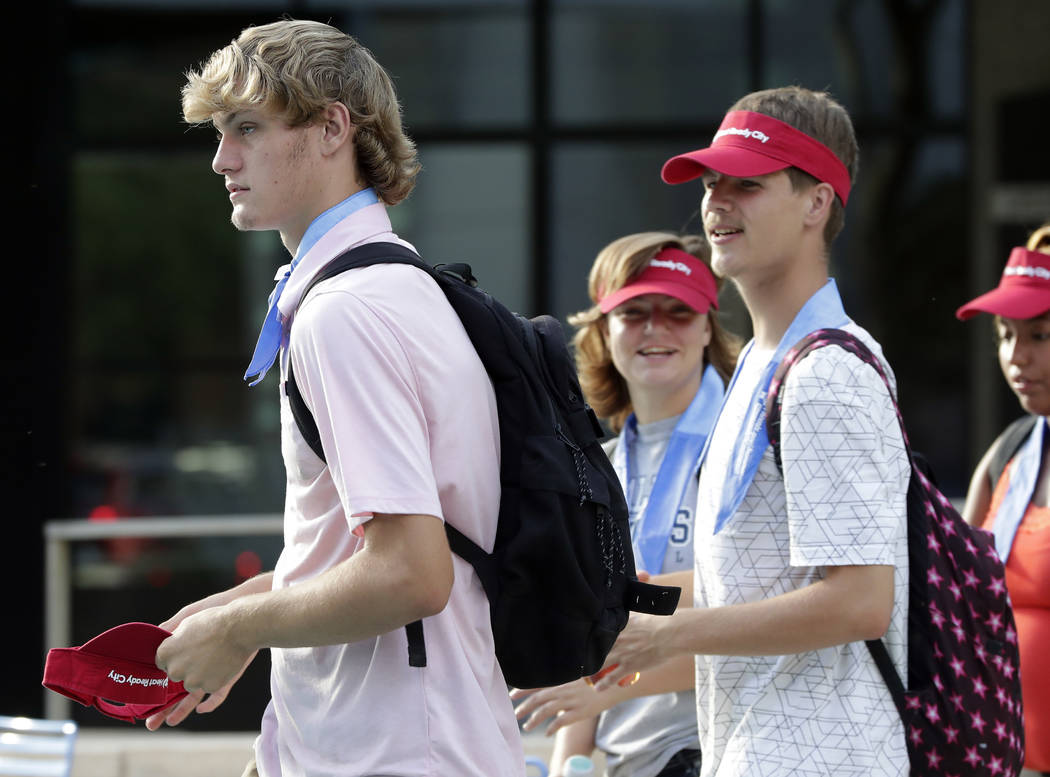 Kids wear cooling neckerchiefs given to them by firefighters early Monday, July 23, 2018, in downtown Phoenix. Parts of Arizona and the Southwest are bracing for the hottest weather of the year with highs this week expected to approach 120 degrees. (AP Photo/Matt York) 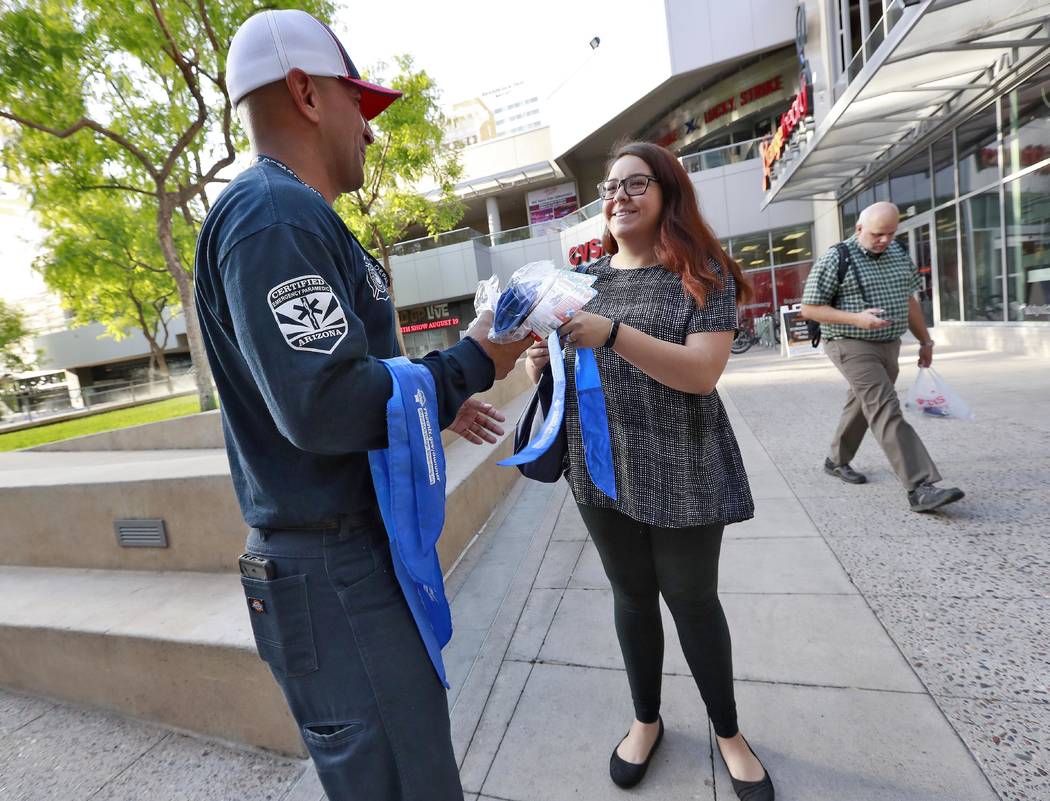 Phoenix firefighter Juan Rodriguez hands out a cooling neckerchief to morning commuter Arielle Thomas early Monday, July 23, 2018, in downtown Phoenix. Parts of Arizona and the Southwest are bracing for the hottest weather of the year with highs this week expected to approach 120 degrees. (AP Photo/Matt York)

PHOENIX — An excessive heat warning was issued for a broad swath of the southwestern U.S. Monday with temperatures expected to approach 120 degrees (almost 49 Celsius) this week in what forecasters say could prove to be the hottest days of the year.

The National Weather Service said southern Arizona will experience temperatures from 112 to 119 degrees (44 to 48 Celsius) through Wednesday.

The heat warning extended to southeastern California, including desert communities such as El Centro, Palm Springs, Twentynine Palms and Blythe, as well as north to Las Vegas and other parts of Nevada.

Parts of Utah were also issued an excessive heat warning with temperatures this week expected to approach 109 degrees (43 Celsius). The weather service said the warning for Utah’s Dixie and Lake Powell regions will be in effect Tuesday through Thursday.

A lesser heat advisory was in effect for west Texas and southeast New Mexico into Monday evening, with high temperatures well into the triple digits, the service said. Still, it was so hot in Las Cruces Monday morning that afternoon school bus service was cancelled.

Some of the highest temperatures over the next few days were expected in Phoenix, where the weather service issued a tweet to warn residents to stay hydrated and take advantage of cooler indoor buildings.

The tweet says officials “can’t stress enough that it will become dangerously hot early this week.”

Firefighters and city officials on Monday morning distributed bright red cloth visors, hand fans and cooling neckerchiefs to downtown commuters, advising them to stay inside as much as possible.

“I’m hoping to stay in the air conditioning all day, and I’m planning to take it easy,” Lisa Kirby said, who was visiting from Rhode Island for a conference. Kirby said she visited the area several summers ago and had a hard time dealing with the heat.

Fire Capt. Jake Van Hook said the department gets dozens of calls a day about heat-related illnesses during excessive heat warnings. “They range from someone who just needs to get inside to someone who needs to get urgently to the hospital,” he said.

Forecasters say monsoon moisture will slowly return to the Phoenix area from the east by the weekend.

Arizona’s monsoons are summer rains that can cause flash flooding and bring heavy winds.