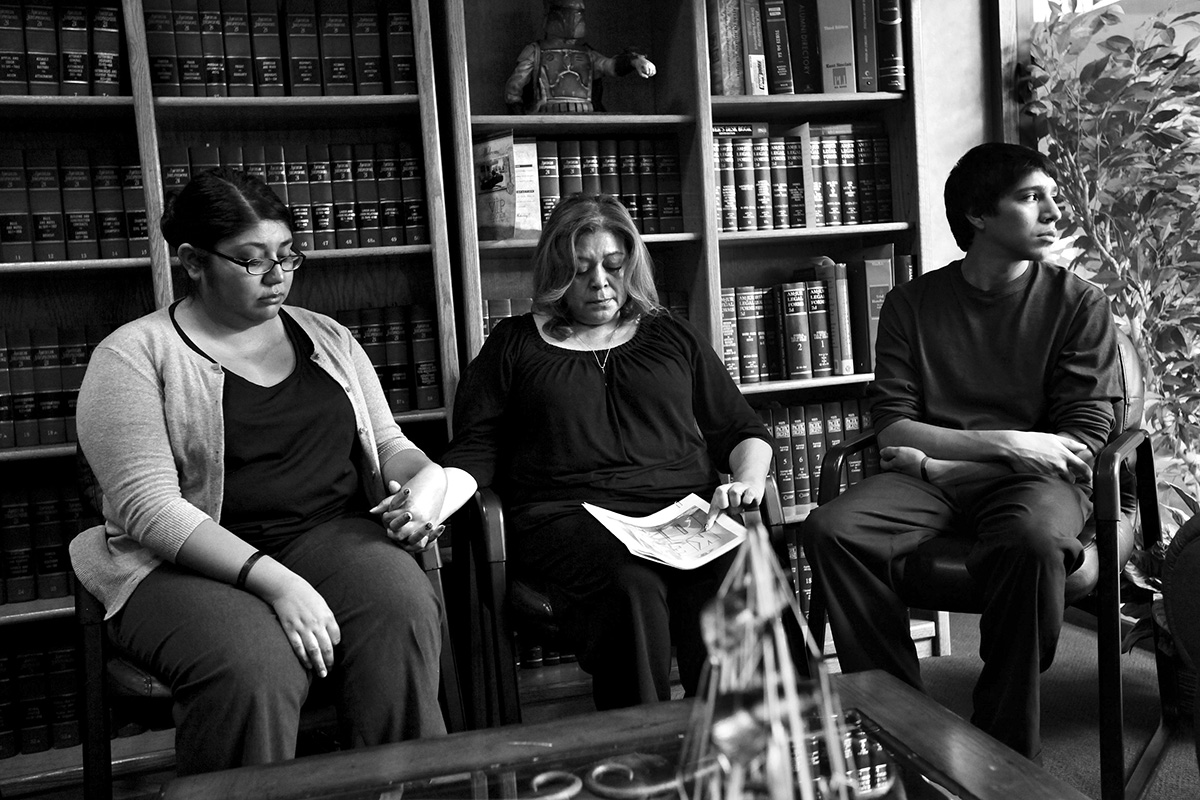 Miriam Tabacon, left, comforts mother Alma Chavez at a press conference announcing a lawsuit suing Metro for the death of Rafael "Ralfy" Olivas, who was killed in the northwest Las Vegas Valley during a confrontation with Las Vegas police officers. At right is Chavez's son, Aaron Olivas. Photographed in their attorney Brent Bryson's office in Las Vegas on Sep. 8, 2011. JESSICA EBELHAR/LAS VEGAS REVIEW-JOURNAL 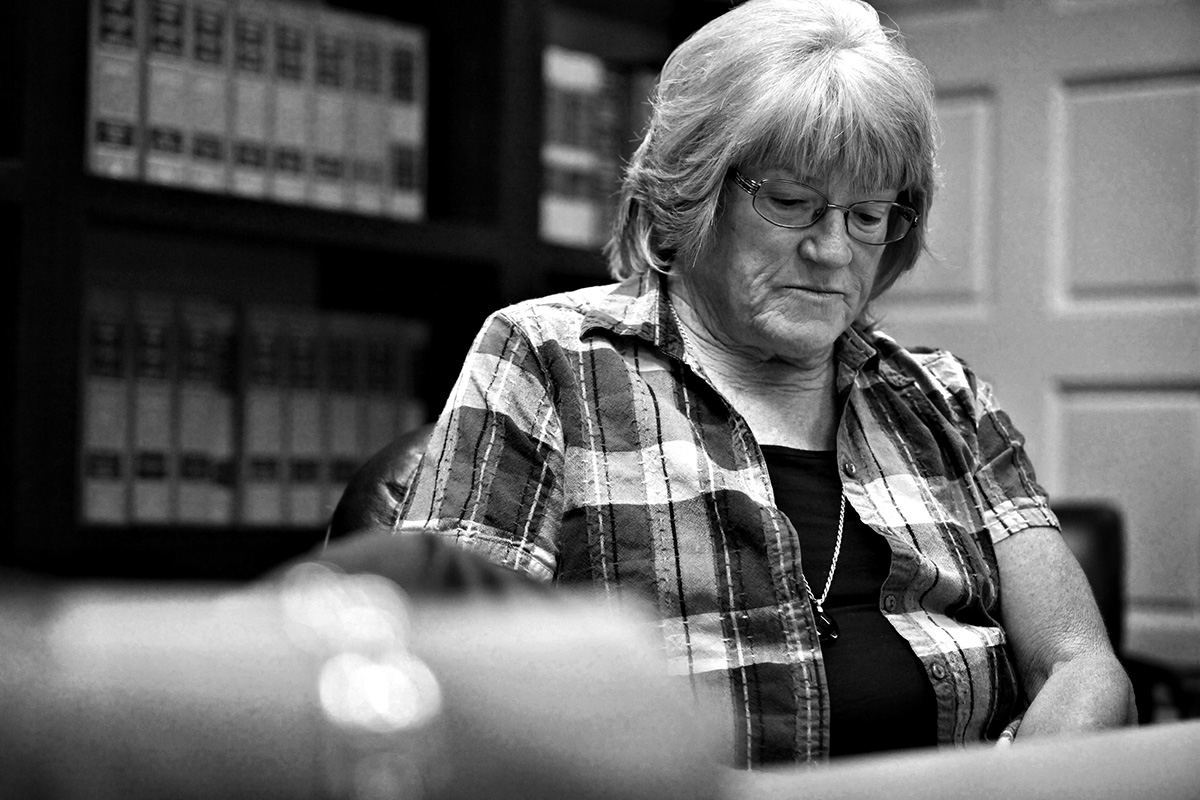 Connie Perrin is seen in the office of attorney Brent Bryson in Las Vegas Sept. 8, 2011. Connie is the mother of John Perrin, who was killed by police. JESSICA EBELHAR/LAS VEGAS REVIEW-JOURNAL

The homicide investigation and coroner’s inquest that followed her son’s 1999 shooting death left Connie Perrin angry and dissatisfied, so she sought emotional and financial redress in federal court.

Though the Metropolitan Police Department eventually settled a separate lawsuit filed on behalf of her son’s young daughter, jurors in Perrin’s case ruled for the police.

Andre Rowe was so intimidated by the idea of challenging the police in court that he chose not to file a wrongful death lawsuit after his father was shot under mysterious circumstances in 1996.

He was further deterred from taking legal action by a unanimous inquest verdict that the homicide was justified.

Whether in the quasi-judicial setting of a coroner’s inquest or in an actual court of law, the families of people fatally shot by police rarely find their desired sense of closure.

Defenders of local law enforcement contend an unbroken string of rulings clearing police and a dearth of successful wrongful death lawsuits validate officers’ use of deadly force. But police critics say otherwise, arguing that people like Perrin and Rowe were victims of multiple failures in a system that should hold officers accountable for deadly decisions.

The facts speak for themselves: In 142 fatal police shootings in the Las Vegas Valley over a little more than the past 20 years, no coroner’s jury has returned a ruling adverse to police. And in 90 percent of the cases, the verdict of justified or excusable was unanimous.

For most families, the inquest is the end of the line.

Only about two dozen of those fatalities spawned lawsuits in federal court, where most cases against local police end up. Only seven culminated in cash settlements. None ended with jury verdicts in favor of the plaintiff, though several cases — including some high-profile ones — are still pending.

While it’s widely believed that officer-involved fatal shootings lead to big lawsuit settlements, the largest payout by far has been $700,000 to the family of Albanian-born ice cream truck driver Deshira Selimaj, killed by Henderson police in 2008. Selimaj, 42, was holding a knife, but some witnesses said she posed no immediate threat when officer Luke Morrison shot her.

The second-largest settlement was $300,000 stemming from the 2003 Las Vegas police shooting of Orlando Barlow. Barlow, 28, was unarmed and on his knees when officer Brian Hartman shot him once in the back with a rifle.

In all other cases combined, local governments have paid only about $400,000 in damages related to fatal shootings since 1991. By comparison, Las Vegas police alone paid $18 million to settle various property damage, excessive force and wrongful arrest claims since 1991, according to the agency’s fiscal affairs committee documents.

In contrast to other areas of the country, including Southern California where governments routinely reach settlements and juries award millions of dollars in wrongful death lawsuits against police, Las Vegas Valley jurors are considered more conservative and pro-law enforcement, making it less likely that a plaintiff will prevail.

“I didn’t take shooting cases for a long time , because you can’t win them here,” Las Vegas attorney Cal Potter said. “Police officers have such wide berth when it comes to their actions.”

A man shot by North Las Vegas police in 2003, however, recently came away with a $3 million settlement. His lawyer attributes his win to the fact that his client survived to tell his version of events.

Lamar Kiles, 18, was shot and permanently disabled by officer Robinson Reed after he allegedly made a movement to his waistband at an apartment complex where Reed was investigating a shots-fired call. Reed initially said his weapon discharged accidentally but later told investigators that he meant to shoot but didn’t remember doing so. Kiles was unarmed.

“Frequently in fatal shootings, you just have officers’ testimony and no other witnesses,” said Brent Bryson, who represented Kiles. “And most people just don’t want to believe that a police officer would behave wrongly.”

To prove a wrongful death claim, the burden is on the plaintiff to show that an officer had malevolent intent when using deadly force. If the officer’s actions were “objectively reasonable” to neutralize a real or perceived threat, the police usually win in court. In Southern Nevada, wrongful death cases are often dismissed by a judge without being heard by a jury.

Potter and other attorneys who have represented families of people shot by police say the federal court system, along with the state criminal courts and the inquest process, fail to hold officers and departments accountable.

“It doesn’t take long for the suing party’s attorney to realize, ‘There’s no money in this for me. (The department) didn’t do anything wrong,’ ” Collins said.

Collins said he does not believe the “objective reasonableness” standard affords officers too much leeway.

Perrin, whom Bryson represented in her lawsuit against Las Vegas police, thought she had a good chance of a legal victory. In April 1999, officer Bruce Gentner shot and killed John Paul Perrin, 32, after he refused to show his hands while walking late at night in a southwest Las Vegas neighborhood. Police later determined that Perrin, who was dribbling a basketball, had no weapons. Gentner testified at inquest that he felt threatened by Perrin. Jurors ruled 6-1 that the killing was justified, and after several years in civil court, another jury also backed the police.

“I feel there should be accountability for these shootings, not just the blanket officer excuse, ‘I feared for my life,’ ” Perrin said. “Do I believe all police officers are bad? Of course not. I admire the job they do, but they are not above reproach.”

Bryson said verdicts like that in the Perrin case send a bad message: “Police officers understand, based on decades of precedent, that they have carte blanche to do what they want to do. They can carry out the police function in any manner and have departmental backing.”

Carol Henderson, whose son Ryan, 20, was shot and killed at their family home in 1997, said she and her husband didn’t sue Las Vegas police in part because they didn’t expect to win. Ryan was pointing a pistol at police.

The atmosphere at the coroner’s inquest did even more to dissuade her from suing.

“I was very intimidated at the inquest, because they not only bring in the officers involved, they also bring in what seems like the whole police force,” Henderson said. “You’re very much outnumbered in there. We would have been afraid even if we felt we had a legitimate case.”

“I thought about (filing suit),” said Rowe, whose father, Henry Rowe, was stabbed and shot dead in 1996 by Metropolitan Police Deparment officer George “Gregg” Pease, who had already killed two other men under unusual circumstances. “It scared me a little bit. I didn’t really want to take on an entire police department.”