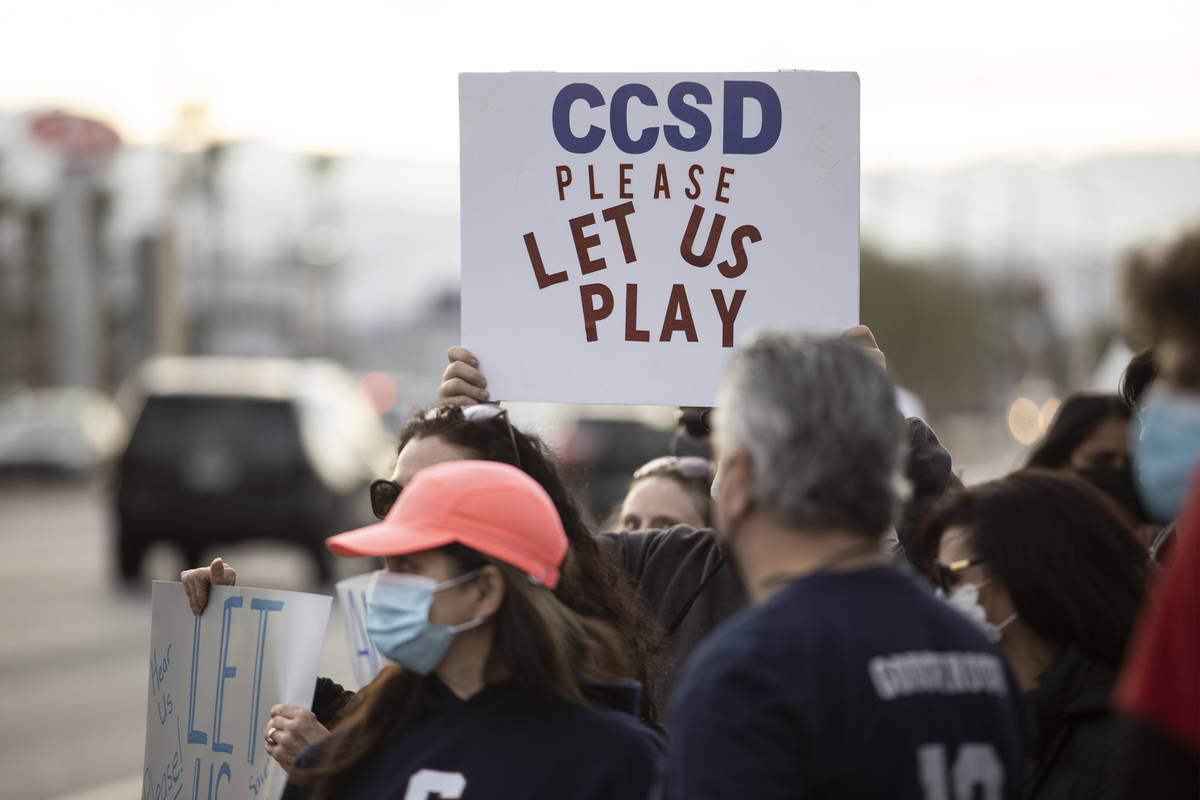 Jara has consistently stated athletics will not be allowed to resume for CCSD member schools until students are back doing some form of in-person learning. Prekindergarten through third-grade students will begin a hybrid learning model March 1, but there is no timetable set for students in any other grades.

CCSD sat out the winter sports season and is the only one of the state’s 17 districts to have decided not to bring back the fall season, which is set to begin March 4.

“We’ve been having finger-pointing on who’s holding it back, and it’s clear it’s Jara,” said Anna Binder, the mother of six children in the district. “With anything you want to see change, you have to get out there.”

Thursday’s school board meeting will be held at 5 p.m. in the Lowden Theater at the Las Vegas Academy of the Arts High School. A rally is set to begin an hour before the meeting.

Tara Perez, the mother of two high school students, has been active on the Let Them Play Nevada social media sites. She posted a flyer on the group’s Facebook page Monday for students and parents to get their car windows painted Monday and Tuesday at Lorenzi Park.

Parents have flooded the public comment segment of the last two meetings with pleas for Jara to reconsider his stance on resuming sports or at least to add an agenda item for it to be discussed in the next meeting.

So far, neither has happened. A call to Jara on Monday seeking comment was not returned.

Nate Boyack, the father to four children in CCSD including a freshman and junior at Centennial High School, sent Jara and school board members an email asking for students to be allowed to play.

His email pointed out that while COVID-19 has been a challenge for everyone, it’s been particularly hard on children who are missing out on social interaction and that the latest statistics from the Centers for Disease Control and Prevention show sports can be played in a safe environment with “minimal risk of harm.”

Boyack said he’s fortunate in that he can take his children out of state to play club sports, but that’s a luxury not afforded to lower-income families.

“One of the most frustrating things is we can travel to Utah and sports are fully on, but you cross the state line to Nevada and it’s all shut down,” Boyack said. “It’s time to get back to some kind of normalcy.”

Binder united early on with Dennis and Nicole Goughnour, the founders of Let Them Play Nevada on Facebook and Twitter, and helped them plan rallies at the CCSD administration building and school campuses across the valley.

She has also helped coordinate communications with the school board and other local and statewide officials, leaving no stone unturned in keeping the issue at the forefront.

“A lot of hours have been invested over a long time, and we’re seeing what’s coming together,” Binder said. “If they’re not hearing it, they don’t have to talk to us. So we’re flooding them with so many emails and phone calls they can’t ignore us.”