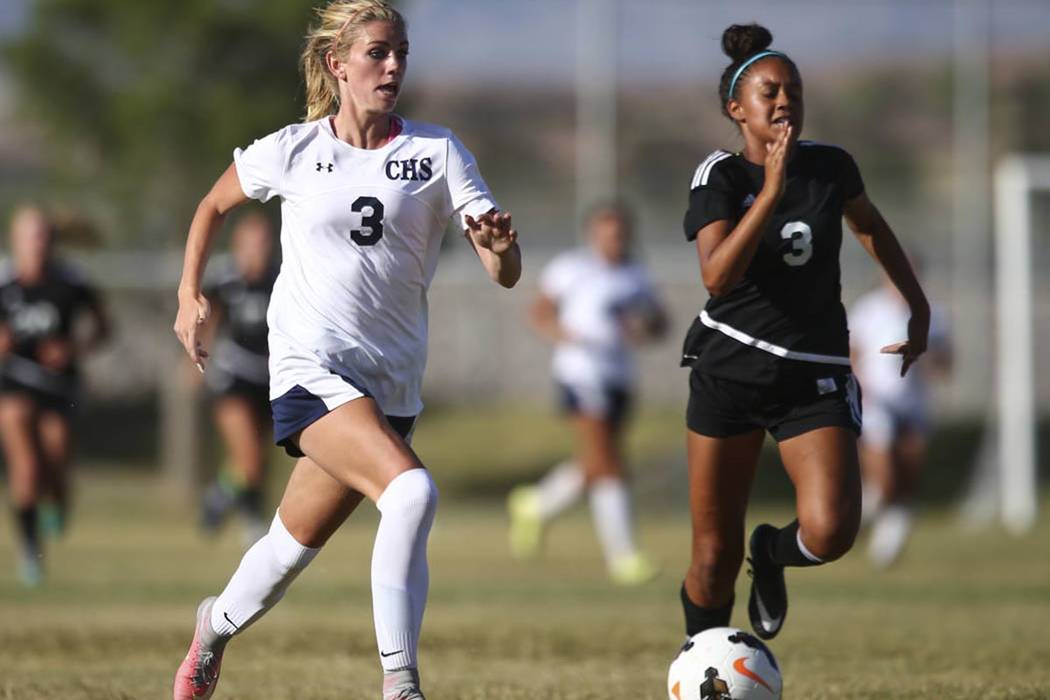 A new girls soccer team in the area is gaining recognition beyond Nevada.

Centennial entered the USA Today Super 25 Region VI rankings this week at No. 15, largely on the strength of a scoreless tie Oct. 15 against a Faith Lutheran team that was ranked third in the Super 25 national rankings.

“We were amped up for that game, and I thought we really looked like the better side,” Centennial coach Tony Clifford said. “We hit the post and almost had a goal at the end of the game. Our defense didn’t give them a lot of space along the sideline, and our midfield’s tackling made it difficult for them.”

The tie dropped Faith Lutheran from No. 3 to No. 9 this week in the national rankings, while Arbor View is in the Region VI rankings at No. 7.

A win would have put Centennial in first place in the 4A Mountain League and helped it overcome a 1-0 loss to Palo Verde early in league play. The Bulldogs have a 1-0 win over Arbor View and other quality wins over Desert League powers Coronado and defending state champion Bishop Gorman.

Quincy Bonds has been a goal-scoring machine for Centennial with 27. That puts her second in the valley this season, tops among 4A players and one away from tying the school’s single-season record, set by Marcella Brooks last year.

“Quincy is one of the best goal-scorers on the West Coast,” Clifford said.

Centennial has 31 points in the Mountain League, three behind Faith Lutheran for first place. Green Valley and Coronado are both unbeaten in the Desert League. Green Valley (9-0-2, 29 points) holds a one-point lead over Coronado (9-0-1, 28).

On the boys side, Bishop Gorman jumped from receiving votes to No. 14 in the USA Today Super 25 national rankings. The Gaels are No. 2 in the USA Today Region VIII rankings, with defending state champion Las Vegas at No. 9 and Eldorado at No. 13.

With three matches remaining in the regular season, Durango appears to have a chokehold on the 4A Desert League girls volleyball title.

The Trailblazers (27-6, 10-0) have a 1.5-game lead over Bishop Gorman (26-7, 8-1) and already have a four-set win over the Gaels. Durango solidified its standing atop the league with a three-set victory Monday over Desert Oasis, the other team that had one league loss.